Amber Heard has detailed acts of violence she allegedly suffered at the hands of her ex-husband Johnny Depp and claimed he warned her the "only way out is death", as she continues her bombshell testimony against the Hollywood actor.

Heard took the stand to testify for the second consecutive day in the defamation case filed against her by her Depp at the trial in Fairfax County, Virginia, on Thursday.

Heard is being sued by Depp for US$50m (A$70m) for implying he abused her in a 2018 Washington Post op-ed. Although she did not name him, he claims her allegations cost him lucrative movie roles.

Under direct examination, Heard told the court she had suggested the couple get a prenuptial agreement before their marriage, to ease any suspicions about her intentions – because he earned "so much more" than her.

She said Depp was against the idea and indicated her would "tear up" any such paperwork, before allegedly telling her: "the only way out of this is death".

Heard on Depp and James Franco

Heard also detailed various incidents where she claimed Depp had often taunted her, calling her a "s**t", "c**t", "an embarrassment", and on one occasion, "threw icecubes" at her on a private plane in front of his friends in 2014.

"He was mad at me for taking the job with James Franco," Heard said.

"He hated, hated James Franco and he was already accusing me of kind of secretly having a thing with him in my past because we had done Pineapple Express together.'

"He called me a go-getter, he called me a s**t – this is happening with security and his assistants on the plane.

"I slowly get up and he starts throwing things at me. Ice cubes, utensils. He's calling me an embarrassment. It felt like there was a blackness in his eyes, it didn't even feel like him."

Heard testified that Depp also slapped her on the flight from Boston to Los Angeles and kicked her "in the back" while wearing a boot when she attempted to walk away, also in front of others who she said "did nothing".

"I caught myself on the floor … I thought to myself, 'I don't know what to do,'" Heard said. "I can't believe he just, he just kicked me."

Depp previously gave a conflicting account of the incident. He denied ever hitting Heard and claimed that she was angry over a previous day's fight and instigated an argument.

Heard told the court Depp repeatedly accused her of having affairs and said that she would send him pictures of her wardrobe fittings for acting work because she "knew it was going to be an issue" and wanted to "minimise" it.

On Wednesday, Heard told the court she vividly recalled the first time Depp allegedly struck her. She said they were sitting on the couch together when she asked about a tattoo on his arm. The tattoo she was referring to was the altered name of his ex-partner, actor Winona Ryder.

"I didn't know what it said, it was hard to read," Heard testified.

and he slapped me across the face." 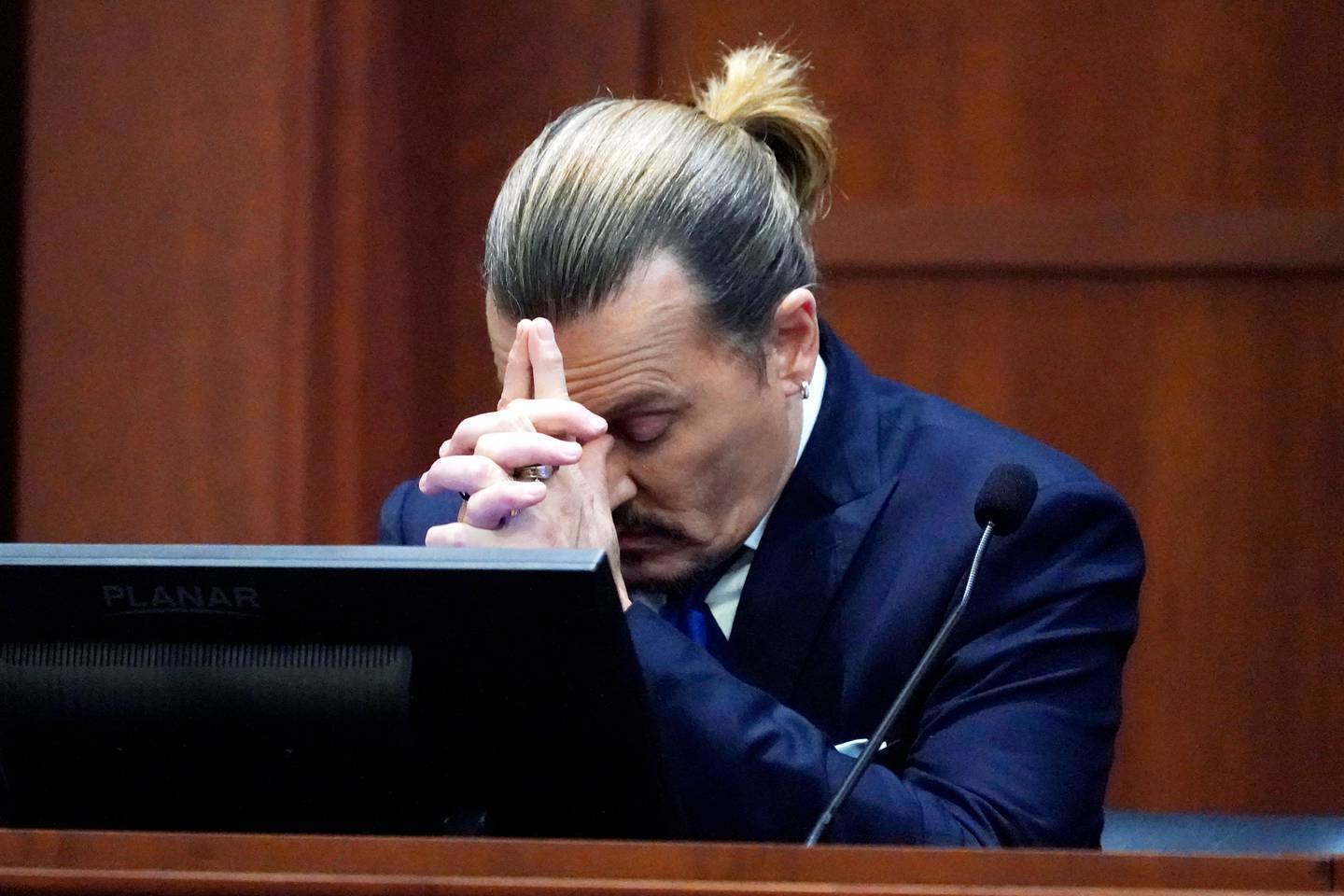 Amber Heard has detailed acts of violence she allegedly suffered at the hands of her ex-husband Johnny Depp and claimed he warned her the "only way out is death". Photo / AP

Heard said Depp slapped her another two times during that altercation before he broke down crying and apologised, promising it would never happen again.

According to Heard, she later forgave him because she "wanted to believe him". But things continued to escalate, she said.

"It started with slapping and it got to repetitive slaps where he'd hold me in a position where he'd slap me multiple times in a row.

She said Depp would then "go back to this like wonderful, almost unreal but real, unbelievably nice, sensitive, kind, warm, generous, interesting funny man that I loved".

"He would make me feel so loved," she said.

"I would feel so distant from that thing that was so scary."

Heard on the beginning of the couple's relationship

Heard described how her relationship with Depp – who she called "one of the most famous people in the world" – first turned romantic when they worked together on The Rum Diary film in Puerto Rico.

"We had a kissing scene … it didn't feel like a normal scene anymore, it felt real," she said.

"He grabbed my face and pulled me into him and really kissed me."

"I felt chemistry. I felt this other thing that went beyond the pale of my job, for sure.

"Johnny clearly felt (the same but) we were both in relationships so we went our separate ways."

She said that about two years later the cast went on an international press tour and Depp invited her to his room. They were both single at the time.

"We drank red wine and started to talk," she said.

"Reconnection was almost instant. It felt like there was electricity in the room.

"As I went to leave, he grabbed both sides of my face and he kissed me, and I kissed him back. Depp is suing ex-wife Amber Heard for libel after she wrote an op-ed piece in The Washington Post in 2018 referring to herself as "a public figure representing domestic abuse". Photo / Getty

During the testimony on Wednesday, Depp cast his eyes downward, rarely looking up.

She told the jury that her relationship with Depp was "always intense," but described how it escalated to become violent and abusive.

Depp, she said, started making derogatory comments about how she dressed, and would call other actors "worthless whores" and compare her to them.

"It would be accusations, accusations and then he would explode," she said, adding that Depp would slap and "backhand" her.

"(I was) walking on eggshells," she added.

Heard's testimony comes after forensic psychologist Dawn Hughes testified at the trial that Heard suffered from post-traumatic stress disorder from multiple acts of abuse, including sexual violence, inflicted on her by her ex-husband, Depp.

Under cross examination on Wednesday, Dr Hughes was presented with a photograph of a large knife inscribed "until death" in Spanish and asked by Depp's lawyer Wayne Dennison why Heard had once gifted it to his client if she was "afraid for her life".

"At this time Ms Heard purchased this knife for Mr Depp, she was engaged in a whole lot of denial … about the extent of violence in the relationship."

Dr Hughes earlier told the court that she had evaluated Heard in person and via Zoom for a total of about 29 hours since September 2019.

Depp spent four days on the stand during the first weeks of the trial, testifying he never struck Heard and that he was the victim. He said he was punched and struck by her on multiple occasions, and that she threw items including a glass bottle at him. He described Heard as having a "need for conflict."

Dr Hughes acknowledged that Heard at times perpetrated physical violence against Depp, but described it as "reactive" and said it paled in comparison to violence she suffered, which left her intimidated and fearful for her safety.

Dennison put it to Dr Hughes that there was not a single medical record that reflected any injury to Heard.

Dr Hughes argued that Heard's nurse had made notes about an incident where Heard was allegedly headbutted by Depp and went for a concussion check, and that she had a busted lip.

Dennison then presented a photograph that depicted "a severe injury that ended up with Depp on a gurney" which Dr Hughes agreed was legitimate.

Earlier, Dr Hughes told the court she also determined that Ms Heard "demonstrated very clear psychological and traumatic effects" as a result of "intimate partner violence" in her relationship with Depp.

"I diagnosed Ms Heard with post traumatic stress disorder … caused by the intimate partner violence by Mr Depp," she said.

"The main opinion is that Ms Heard's report of intimate partner violence, and the records I reviewed, is consistent about what we know in the field … characterised by physical violence, psychological aggression, sexual violence, coercive control and surveillance behaviours," she said.

Dr Hughes was the first witness called by Heard's defence team after Depp's attorneys rested their case earlier on Tuesday, the 13th day of the trial in Fairfax, Virginia.

Earlier in trial, jurors heard from Dr Shannon Curry, a forensic psychologist hired by Depp's legal team, who told jurors that Heard did not suffer from PTSD.