Amber Heard has challenged Johnny Depp to follow her lead and do a TV interview "for an hour and answer all questions" about allegations of abuse in their marriage.

Heard's first post-trial interview about the defamation case filed against her by her Hollywood star ex-husband will air in full on Friday evening in the US (Saturday NZT).

In a statement issued hours ahead of the broadcast, Heard's spokesperson took aim at Depp about the Aquaman star's upcoming interview with Savannah Guthrie.

"If Mr Depp or his team have a problem with this, we recommend that Johnny himself sit down with Savannah Gutherie [sic] for an hour and answer all her questions," the spokesperson said.

Snippets of Heard's interview with NBC Today have aired on the programme throughout the week.

In one teaser, the anchor asked the actress if her pre-trial statement that she "still [has] love for" Depp stands, despite having doubled down on her testimony that he viciously abused her during their marriage and claiming that he made good on a promise to globally humiliate her. 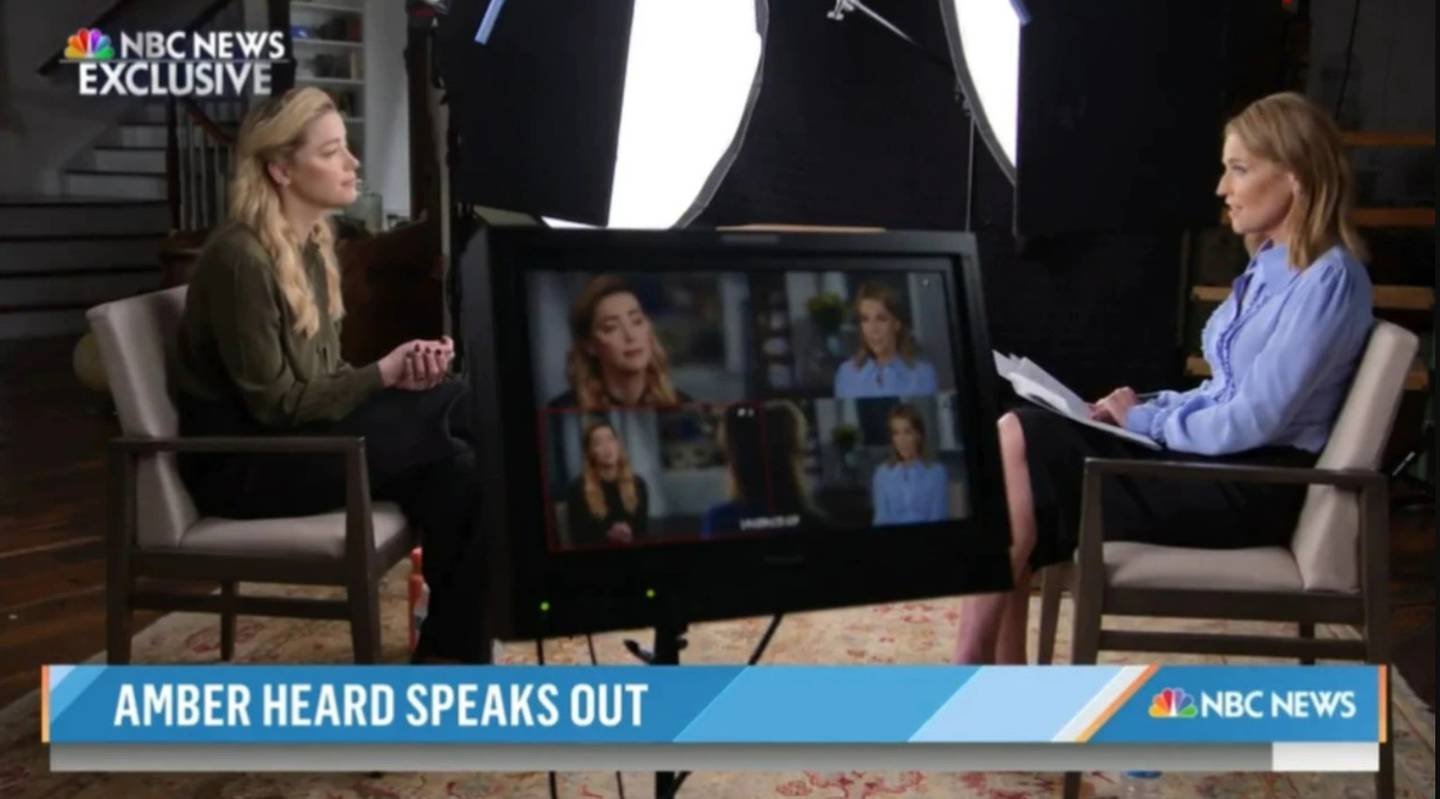 "I love him. I loved him with all my heart and I tried the best I could to make a broken relationship work and I couldn't.

"I have no bad feelings or ill will towards him at all.

Heard added that she "stand[s] by every word" of her testimony, including that Depp physically and sexually abused her with a wine bottle during their marriage.

"To my dying day, I will stand by every word in my testimony," Heard continued.

"I never had to instigate it — I responded to it," she insisted, saying that audio clips of their fights were edited and caught a victim of abuse whose life was "at risk".

"When you're living in violence and it becomes normal — as I testified to — you have to adapt."

Still, she conceded, "I did do and say horrible, regrettable things throughout my relationship.

"I behaved in horrible, almost unrecognisable to myself, ways.

"I have so much regret," she said, blaming it on "being pushed to the extent where I didn't even know the difference between ... right and wrong." 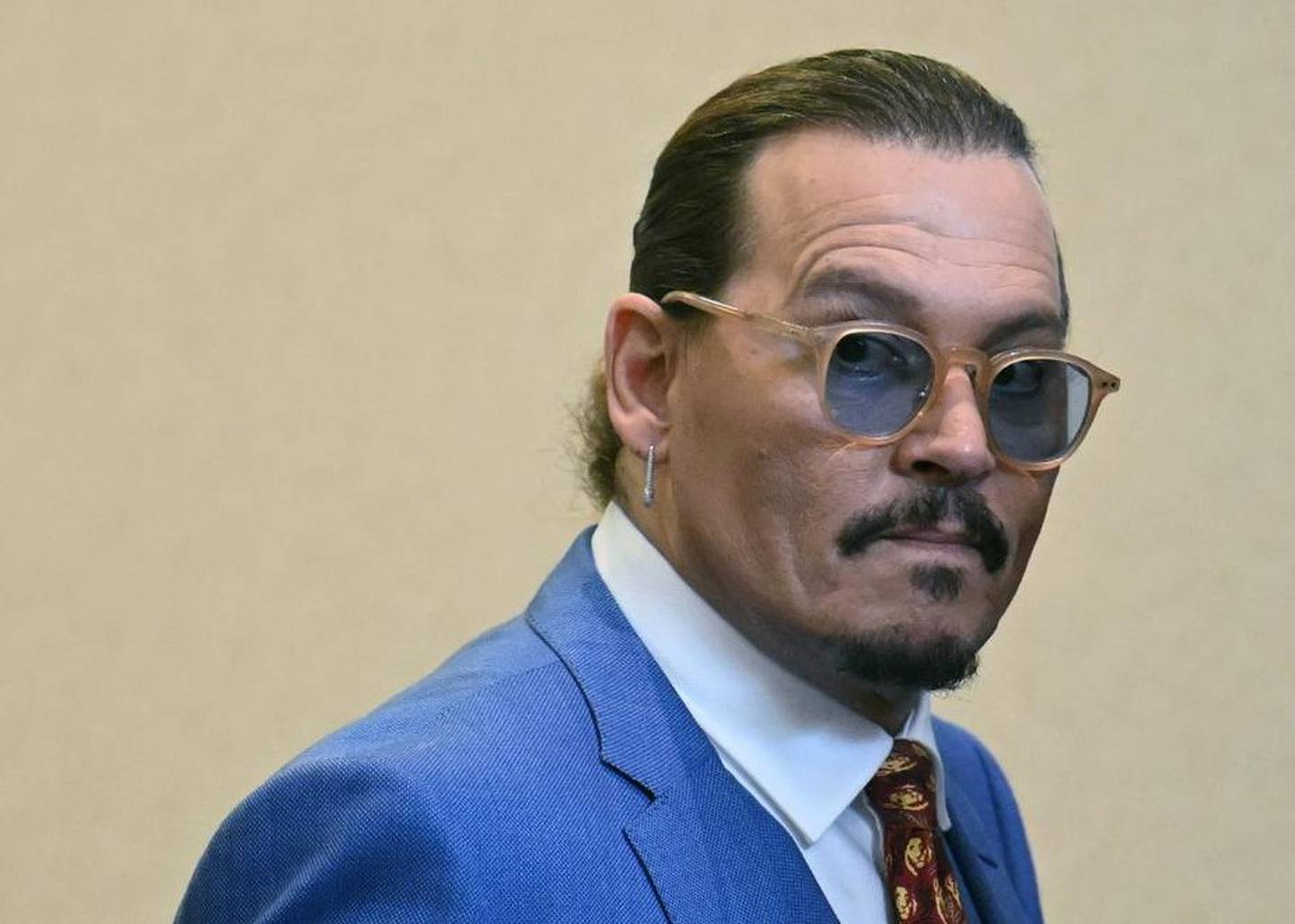 Johnny Depp in court during the trial. Photo / AP

Heard told Guthrie that she "feels as though" Depp delivered on his promise to subject her to "global humiliation" – as he threatened in a message admitted as evidence in court.

"I'm not a likeable victim, I'm not a perfect victim."

The jury in the high-profile trial between Depp and his ex-wife Heard ruled in favour of the Pirates of the Caribbean star after a six-week trial in Fairfax County, Virginia on June 1.

The jury found that Heard defamed Depp in a 2018 Washington Post article – in which she described herself as "a public figure representing domestic abuse" – that they agreed was false, defamatory and with malice, on all counts, and awarded him US$15 million ($23.5m) damages, comprised of US$10m compensatory and a further US$5m punitive.

Heard told Guthrie she doesn't blame the jury for not believing her testimony.

"I actually understand," she said.

"He's a beloved character and people feel they know him. He's a fantastic actor.

"They had said in those seats and heard over three weeks of non-stop, relentless testimony from paid employees and towards the end of the trial, randos, as I say.

"Again, how could they after listening to three and a half weeks of testimony about how I was an uncredible person and not to believe a word that came out of my mouth." 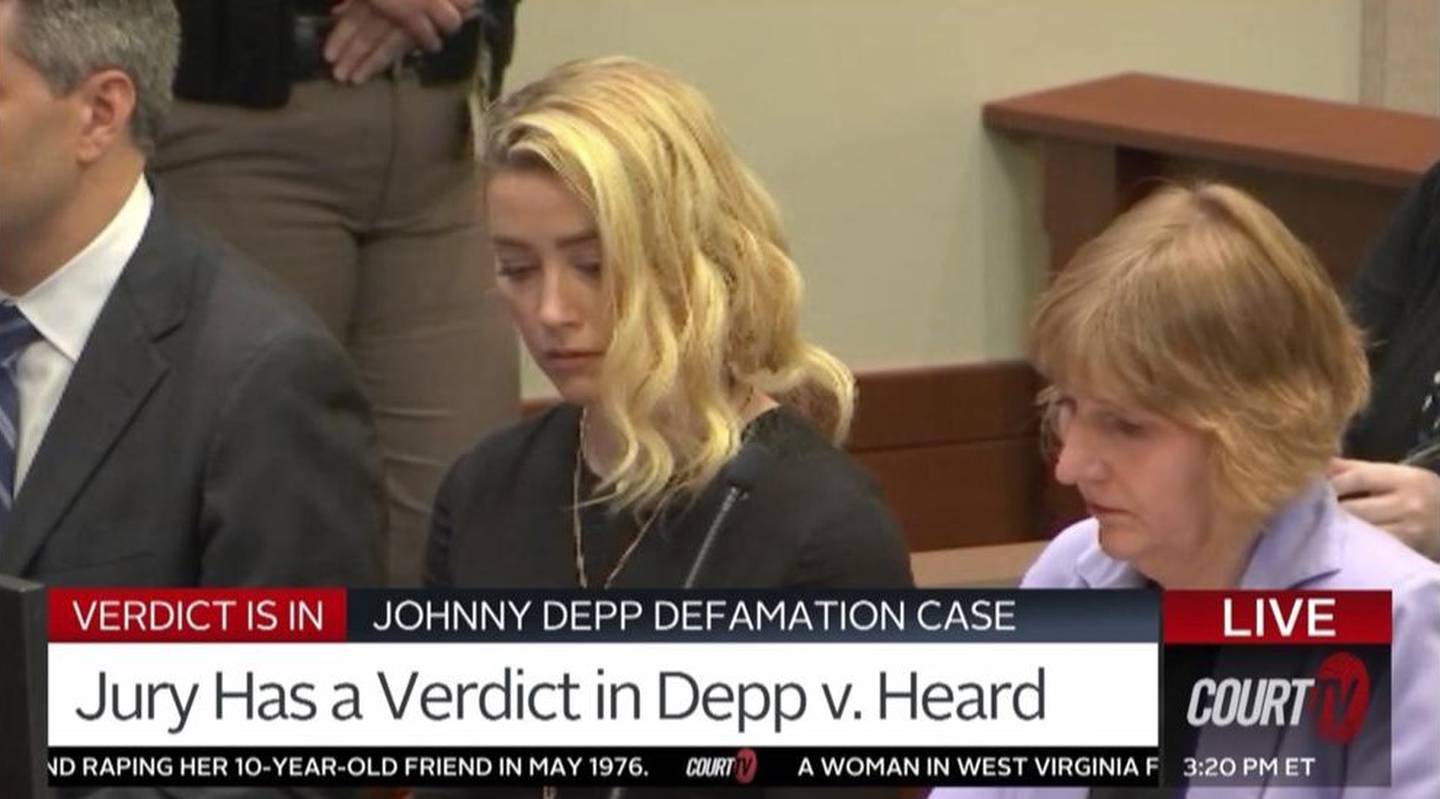 Heard won one of her three defamation counterclaims against Depp and was awarded US$2m in damages. The jury found that Depp's lawyer Adam Waldman defamed her when he told the Daily Mail she set up Depp in a hoax when the police came to their apartment in May 2016.

The star said she "would not blame the average person for looking at this and how it's been covered and not think that it is Hollywood brats at their worst".

She said the marriage was "ugly" — but also at times "very beautiful."

"But I've always told the truth."

Speaking to Guthrie – who last week revealed her husband had done consulting work with Depp's legal team – Heard also commented on the intense scrutiny of her six-week trial and the overwhelming support for Depp on social media. The hashtag "Justice for Amber Heard" garnered 27 million views on TikTok, compared with one for Depp which hit 20 billion views.

"I don't care what one thinks about me or what judgments you want to make about what happened in the privacy of my own home, in my marriage, behind closed doors," Heard told Guthrie.

"I don't presume the average person should know those things. And so I don't take it personally. But even somebody who is sure I'm deserving of all this hate and vitriol, even if you think that I'm lying, you still couldn't look me in the eye and tell me that you think on social media there's been a fair representation.

"You cannot tell me that you think that this has been fair."

.@SavannahGuthrie: On the first day of the trial you issued a statement, and part of the statement said, 'I still have love for Johnny.'

SG: Is that still true?

AH: Absolutely. I love him. I loved him with all my heart. pic.twitter.com/h49L6XdYuR

Heard described the six-week defamation trial as "the most humiliating and horrible thing I've ever been through."

"I have never felt more removed from my own humanity. I felt less than human," she said.

"After three and a half weeks I took the stand and saw a courtroom packed full of Captain Jack Sparrow fans who are vocal, energised," she said, referring to Depp's Pirates of the Caribbean character.

The exclusive interview was secretly filmed in New York City on June 9, Deadline reports. To keep the special away from prying eyes, the interview was not filmed at NBC's iconic 30 Rock building. 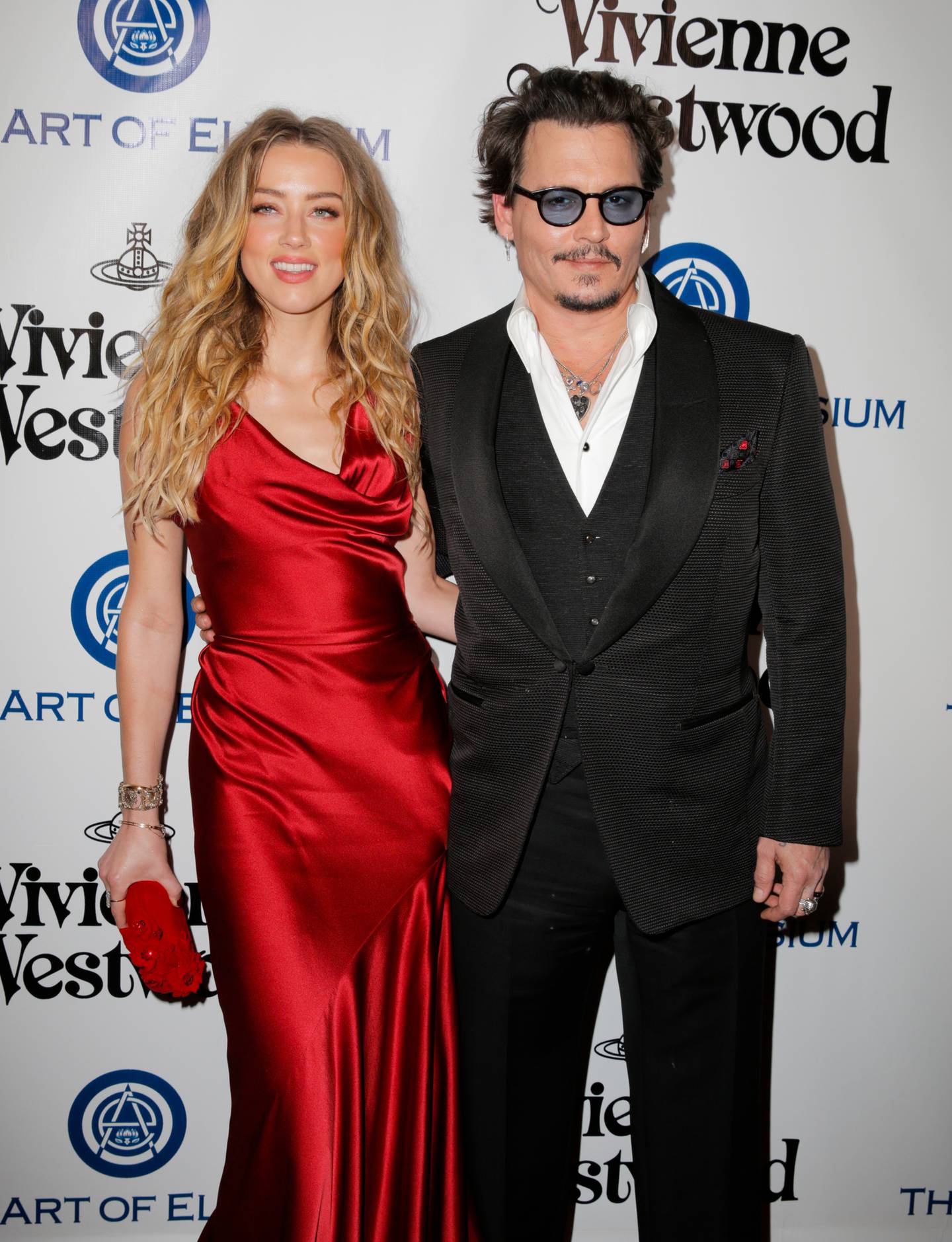 A US jury found Johnny Depp and Amber Heard defamed each other, but sided far more strongly with the Pirates of the Caribbean star. Photo / AP

A spokesperson for Heard previously told news.com.au about the interview: "Johnny Depp's legal team blanketed the media for days after the verdict with numerous statements and interviews on television, and Depp himself did the same on social media.

"Ms Heard simply intended to respond to what they aggressively did last week; she did so by expressing her thoughts and feelings, much of which she was not allowed to do on the witness stand," the spokesperson continued in a statement.

Earlier this week, a juror in the defamation case revealed the jury was "very uncomfortable" with Heard's testimony because there was a lack of evidence to support it and she appeared to cry "crocodile tears".

One of the jurors from the seven-person panel, who spoke on the condition of anonymity, told ABC News exclusively that "a lot of Amber's story didn't add up" and "the majority of the jury felt she was more the aggressor". The jury didn't buy Heard's testimony and thought she cried "crocodile tears", one of the jurors said in a post-trial interview. Photo / AP

"The crying, the facial expressions, the staring at the jury, all of us were very uncomfortable," the male juror said.

"She would answer one question and she would be crying and two seconds later she would turn ice cold ... some of us used the expression 'crocodile tears'."

Depp, meanwhile, kept his composure and was more believable, according to the juror.

"He just seemed a little more real in terms of how he was responding to questions. His emotional state was very stable throughout," he said.

The juror added that he felt both sides were "abusive to each other" but doesn't believe that "makes either of them right or wrong".

"But to rise to the level of what she was claiming, there wasn't enough or any evidence that really supported what she was saying," he said. US actor Amber Heard testifies during the Depp vs Heard defamation trial at the Fairfax County Circuit Court in Fairfax, Virginia. Photo / AP

The biggest blow to Heard's credibility in the eyes of the jury was the "fiasco" revelation she hadn't donated US$7m from her divorce settlement to charity as she told a UK talk show she had, the juror continued.

Heard told the trial that she "pledged the entirety" to the charity, despite earlier claiming it had already been donated.

"The video shows her sitting there telling the host she gave all that money away. And the terms she used in that video clip were 'I gave it away', 'I donated it', 'it's gone'. But the fact is, she didn't give much of it away at all," the juror said.

Following the verdict, Depp released a statement saying "the jury gave me my life back".

"I am truly humbled," he continued.

"Six years ago, my life, the life of my children, the lives of those closest to me, and also, the lives of the people who for many, many years have supported and believed in me were forever changed. 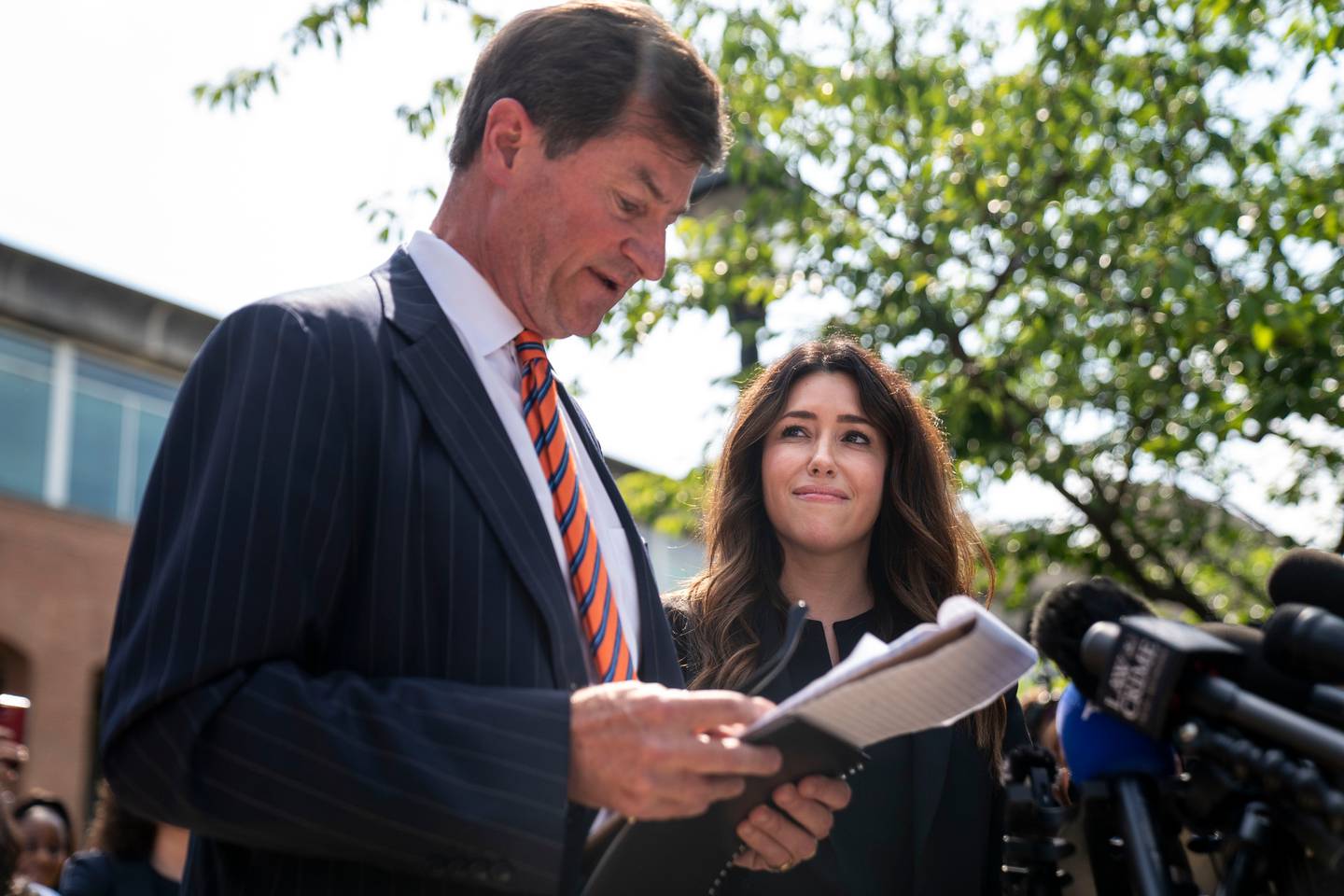 "False, very serious and criminal allegations were levied at me via the media, which triggered an endless barrage of hateful content, although no charges were ever brought against me.

"It had already travelled around the world twice within a nanosecond and it had a seismic impact on my life and my career."

Heard also issued a statement at the time, saying she was disappointed "beyond words".

"I'm heartbroken that the mountain of evidence still was not enough to stand up to the disproportionate power, influence, and sway of my ex-husband," Heard said.

"I'm even more disappointed with what this verdict means for other women. It is a setback. It sets back the clock to a time when a woman who spoke up and spoke out could be publicly shamed and humiliated. It sets back the idea that violence against women is to be taken seriously.

"I believe Johnny's attorneys succeeded in getting the jury to overlook the key issue of Freedom of Speech and ignore evidence that was so conclusive that we won in the UK.

"I'm sad I lost this case. But I am sadder still that I seem to have lost a right I thought I had as an American – to speak freely and openly."