Prime Minister Jacinda Ardern has been featured in a trailer of the upcoming reboot of a hugely popular satirical British television series from the 90s.

Spitting Image, a satirical comedy series that first screened in the mid-1980s, is due to hit the small screen again via BritBox on October 3.

The programme features puppet caricatures of contemporary celebrities and public figures, including politicians, and was massively popular for making fun of serious issues and people of the day - and even the queen.

So it is not entirely unexpected that even New Zealand's PM has been spotted on the show's newly released trailer; seated among several world leaders.

Sitting just behind US president Donald Trump, she is depicted wearing a white ruffled blouse and black jacket. A small New Zealand flag sits just in front of her. 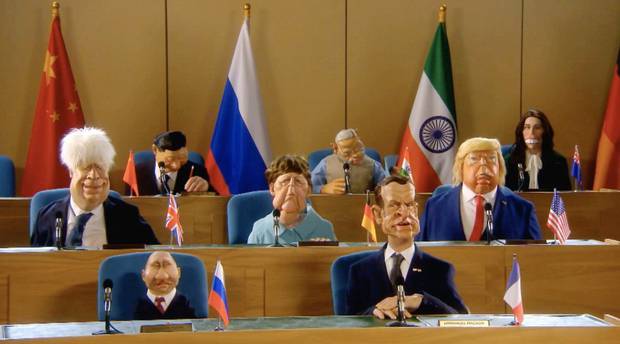 Her teeth have been emphasised in an unflatteringly big way - but so too are features of other world leaders in the mix; and it is one of the things the series is known for.

"Spitting Image - a show that takes on the global elite with sophisticated satire," a voice says in the background.

Shortly afterwards, the clip shows a puppet of rapper Kanye West declaring himself the "ruler of earth" before immediately throwing giveaway prizes - sneakers - to countries including Germany and Russia.

Ardern's likeness is shown with a shocked face as she looks on to those who have seemingly won a prize.

Near the end of the trailer - and what has proven to be controversial among fans since its release - is a scene showing UK Prime Minister Boris Johnson and Trump half naked in a sauna eating buckets of fried chicken.

A fight ensues with all three of the world leaders throwing pieces of chicken at each other before Putin hits the other two in the genitals.

The trailer ends with a voice saying: "Watch Spitting Image because there's something funny about these people."

Earlier this month, the series announced it had made 100 puppets of different celebrities and well-known world figures.

Some of the puppets were shown off on social media - including Johnson (sporting oversized lips and a mop of spiky white hair), Melania Trump, the Duke and Duchess of Sussex Prince Harry and Meghan.

Camilla, Duchess of Cornwall, and the Prince of Wales, Prince Charles (sporting massive ears) are also depicted as puppets in the show.