The tide turned on Celebrity Treasure Island after one of the star contestants was "almost drowned" by a competing celebrity in one of the show's games.

Episode three's water sports challenge saw the two teams facing off in the sea, tasked with pulling a floatation ring back to their side of a makeshift court. As the main challenge of the episode the stakes couldn't have been higher as the two teams organised themselves into factions of boys and girls.

First up were the men. As they fought it out in the waves, leaping on, slipping over and pulling at each other in an attempt to haul the ring to their goal, the show's co-presenter and ZM host Bree Tomasel described the physical action as like "watching a really weird ocean version of WWE".

Unlike wrestling however, things quickly got real when the Hits radio host Sam Wallace accused his opponent Moses Mackay (of Sol3 Mio fame) of purposefully drowning him in order to force him to give up the ring.

"When you go into a competition like this there has to be a little bit of decorum," Wallace said after the challenge. "And when I'm holding the ring and being held under the water so that I have to let go of the ring, it's breaking the rules." 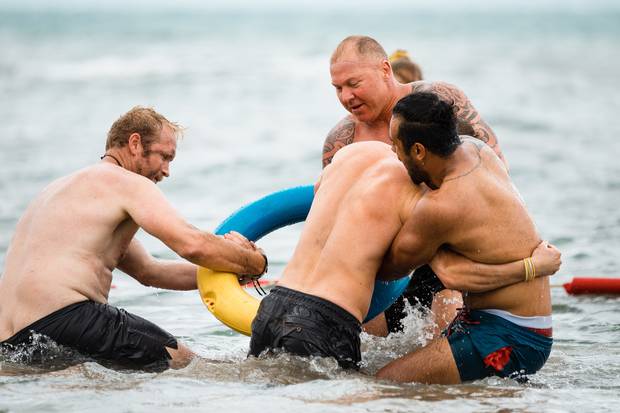 The celebrities get physical as they attempt to pull the ring into their respective ends.

In a replay of the controversial moment a 'Drowning Time' timer even appeared onscreen to count down the time Wallace spent under water.

The footage also shows the radio star immediately jumping up and calling foul to judge and co-host Matt Chisholm. However his appeal fell on deaf ears - and blind eyes - as Chisholm waved off his concern, shouting back, "Play on. I didn't see it."

After his concerns were rejected Wallace wasted no time reciprocating in kind, jumping straight onto rival and boxing champion Shane Cameron and dunking him. The distraction was enough to allow Wallace's team mate and Olympic gold medal rower Eric Murray to pull the ring to his goal, even if he almost lost his swimming togs and what remains of his modesty in the process.

However any joy of his team's victory washed right over Wallace who instead fronted up to Mackay and confronted him, saying, "I didn't need to be held under the water". Mackay can be seen shaking his head 'no' to the accusation.

After the game Mackay spoke to the camera saying, "I don't remember putting his head under the water. Even if I did it wasn't a genuine, 'I'm trying to drown you'. But he definitely took it that way and he's definitely held it as a grudge."

Further controversy plagued the game with everything from unfair starting ring throws by Chisholm to member-swapping between teams being appealed and complained about.