Actor Alec Baldwin has spoken out about the accidental shooting on the set of his new film that killed cinematographer Halyna Hutchins, saying she was his "friend" and asking paparazzi to leave his family alone.

Baldwin discharged a gun on the set of Rust in Santa Fe, New Mexico on October 21, accidentally killing Hutchins, 42, and injuring the film's director Joel Souza.

Since then, multiple accusations of unsafe working conditions have surfaced as police try to determine who was to blame for the incident.

Alec Baldwin speaks out on the fatal shooting of cinematographer Halyna Hutchins on the set of RUST:

“She was my friend ... We were a very, very well-oiled crew shooting a film together, and then this horrible event happened." pic.twitter.com/QzVISWk8Qy

Both assistant director David Halls and armourer Hannah Gutierrez-Reed have been questioned as part of the investigation into how Baldwin ended up handling a gun loaded with live ammunition.

The District Attorney has also "not ruled out" charges against Baldwin for firing the shot.

Baldwin issued a statement after the incident but up until now, the 63-year-old actor had declined to front the media. That changed on Saturday, local time, when he and his wife Hilaria spoke to a group paparazzi in Manchester, Vermont.

In an often tense conversation, which lasted about four minutes, the Baldwins berated the paparazzi and briefly clashed with each other.

Baldwin stressed that he couldn't comment on the ongoing investigation into Hutchins' death, citing instructions from the Santa Fe Country Sheriff's Office, but he did speak about his relationship with the cinematographer.

"It's an active investigation in terms of a woman dying," he said.

"She was my friend. The day I arrived on set and started shooting I took her to dinner with Joel, the director.

"We were a very, very well-oiled crew shooting a film together and then this horrible event happened."

One of the paparazzi asked about Baldwin's meeting with Hutchins' husband, but couldn't remember her name while phrasing the question. 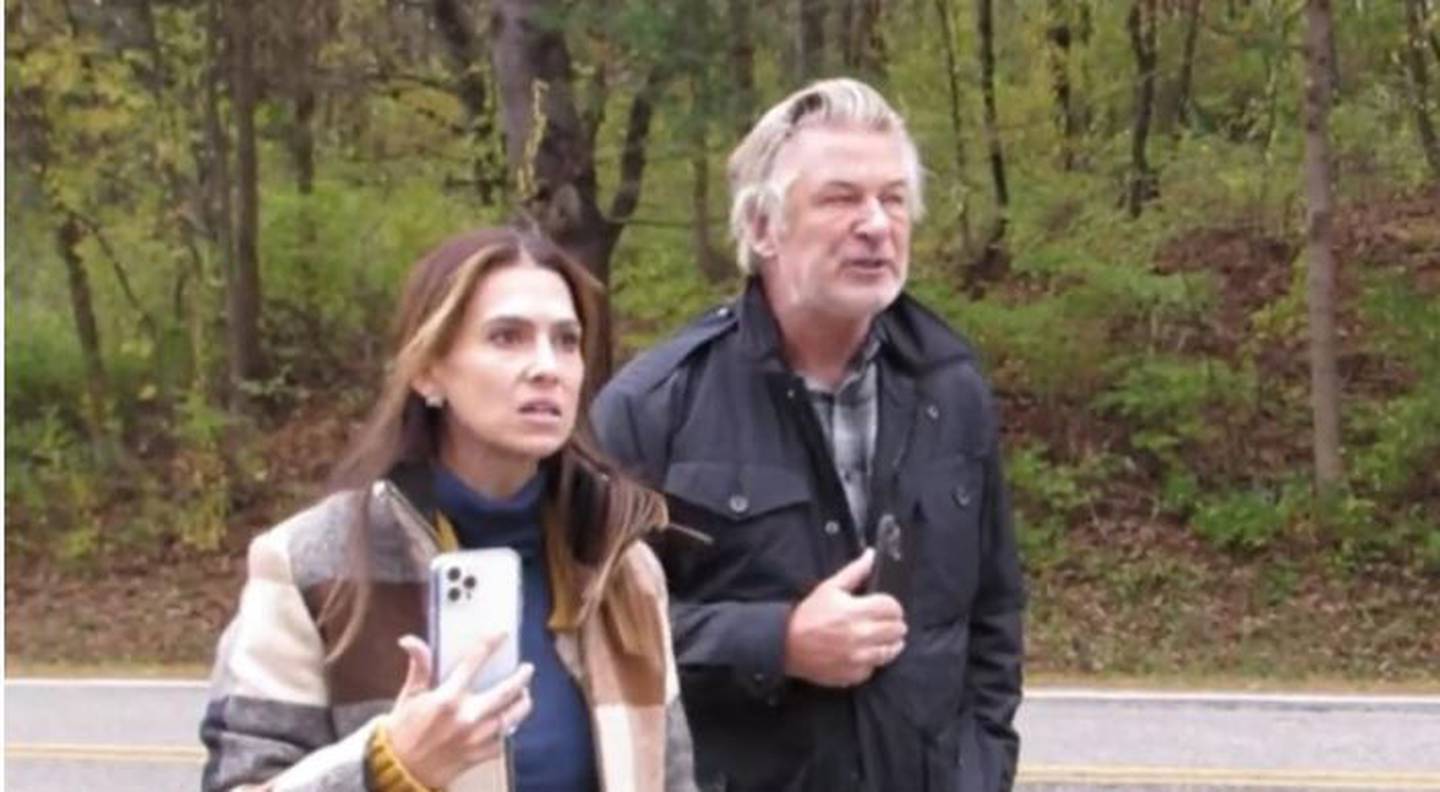 Alec Baldwin and his wife Hilaria speak to the paparazzi. Photo / Twitter

That prompted a furious response from Hilaria.

"If you are spending this much time waiting for us you should know her name."

"You don't know her name?" said Baldwin, before confirming he had met Hutchins' husband Matthew and her 9-year-old son.

"I wouldn't know how to characterise it. They're mortified," he said.

Hilaria interrupted again, saying: "You guys, you guys. You know what, no details."

Baldwin then turned to her and said: "Do me a favour, I am going to answer the questions." 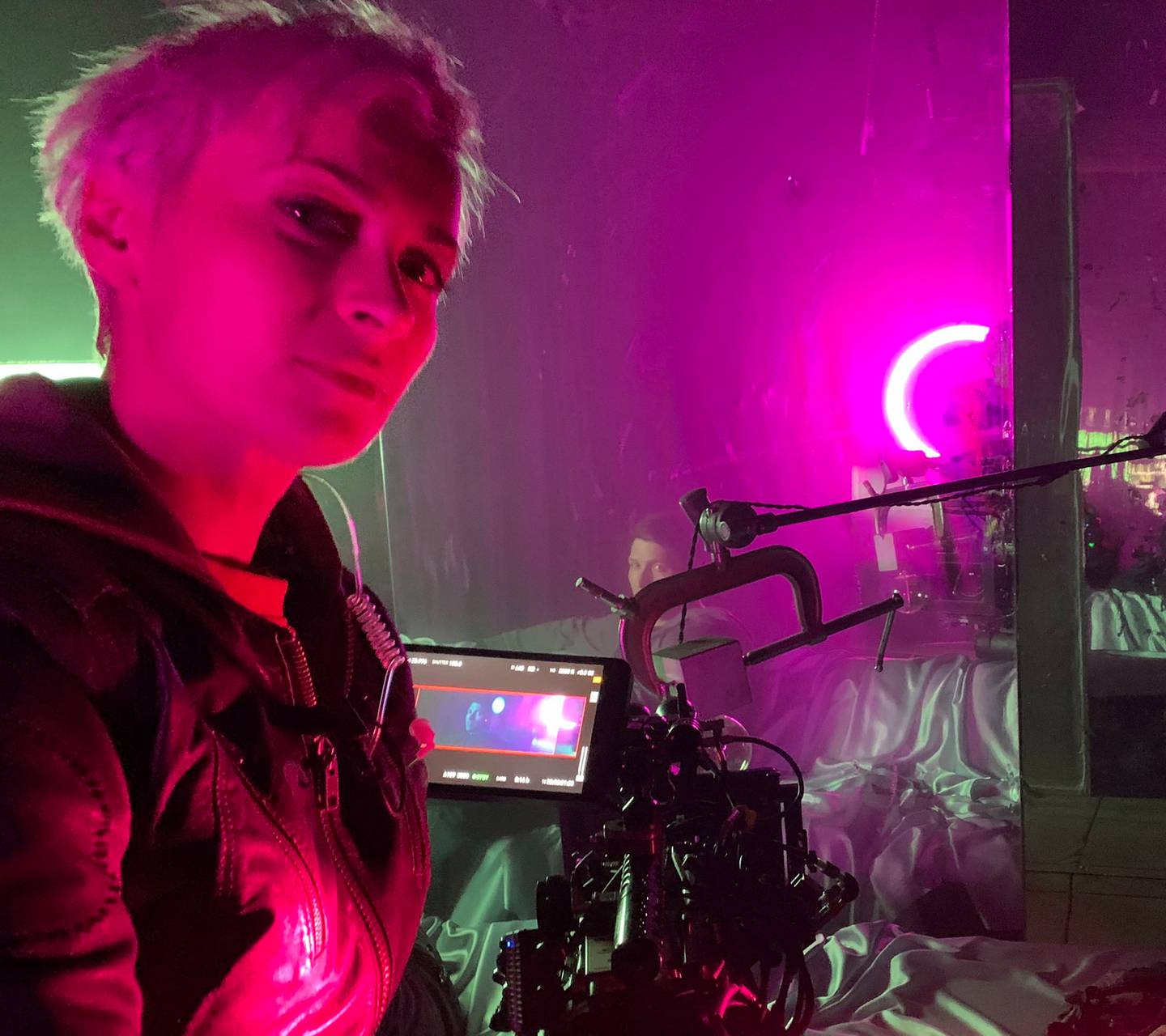 Cinematographer Halyna Hutchins on the set of Archenemy in January 2020 in Los Angeles. Photo / AP

"The guy is overwhelmed with grief. There are incidental accidents on film sets from time to time, but nothing like this. This is a one-in-a-trillion episode. So he is in shock, he has a 9-year-old son," he said.

The actor asked the paparazzi to stop following him now that he had spoken with them, saying "my kids are in the car crying".

"As a courtesy I came to talk to you. I am not allowed to comment on the investigation, I talk to the cops every day," he said. 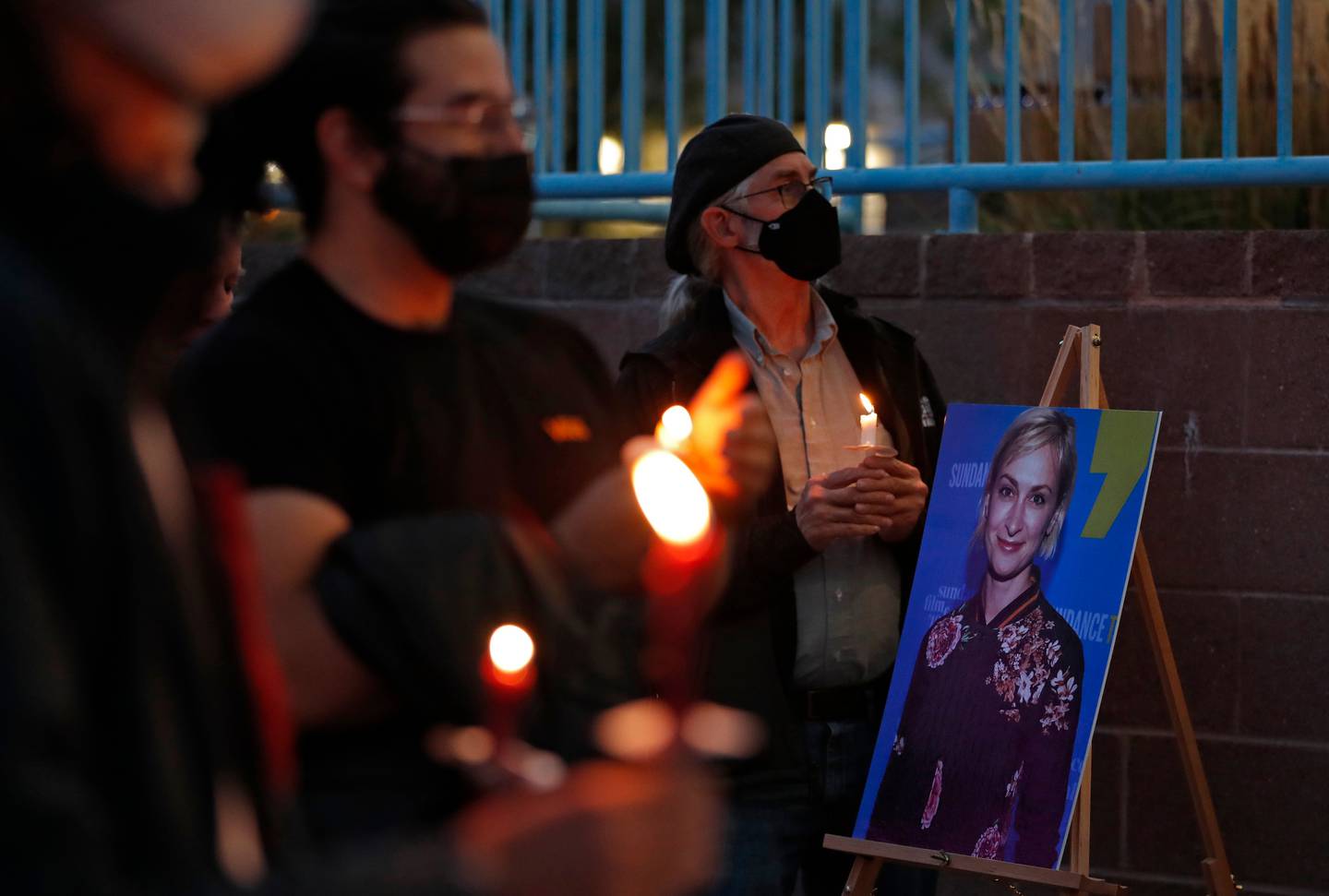 "We sat down as a courtesy to talk to you, now please, would you just stop following us. Just leave us alone. We gave you everything."

He also voiced support for a push to restrict the use of real guns on film sets.

Armourer had 'no idea where live rounds came from'

Baldwin's comments come just a day after lawyers for armourer Hannah Gutierrez-Reid shared a statement on Twitter, saying she wanted to "address some untruths that have been told to the media, which have falsely portrayed her and slandered her".

In the statement, her lawyers said safety was her "number one priority on set" and she had "no idea where the live rounds came from".

"Hannah and the prop master gained control over the guns and she never witnessed anyone shoot live rounds with these guns and nor would she permit that. They were locked up every night and at lunch and there's no way a single one of them was unaccounted for or being shot at by crew members," the statement read. Hannah Gutierrez Reed was an armourer on the set of Rust. Photo / Supplied

Gutierrez-Reid's lawyers claimed because she was hired for two positions on the film, it made her ability to focus on the job of armourer difficult.

"She fought for training, days to maintain weapons, and proper time to prepare for gunfire but ultimately was overruled by production and her department. The whole production set became unsafe due to various factors, including lack of safety meetings," the statement said.

Her lawyers said she would speak more about the incident next week.

Gutierrez-Reid was reportedly accused by crew members of breaking basic safety protocols on the Montana set of Nicolas Cage's The Old Way in August.

Cage even walked off set screaming at Gutierrez-Reed after she fired a gun without warning for the second time in three days, the movie's key grip, Stu Brumbaugh, told The Wrap.

"Make an announcement, you just blew my f***ing eardrums out!" Cage yelled before walking off in a rage, Brumbaugh recalled.

Baldwin told he was handing a 'cold' gun

Meanwhile, Rust's assistant director Dave Halls has revealed he didn't check every barrel of the gun but "could have" before he handed it to Baldwin, according to The Daily Mail.

Halls reportedly told police he only checked three out of five chambers of the gun before handing it to Baldwin.

He told police Gutierrez-Reed handed him the weapon, but he couldn't remember if she "spun the drum" - protocol to show that the gun is unloaded.

"David advised when Hannah showed him the firearm before continuing rehearsal, he could only remember seeing three rounds," a search warrant says.

"He advised he should have checked them all but didn't and couldn't recall if she spun the drum."

According to an affidavit filed by investigators, Halls handed Baldwin the prop gun and yelled that it was a "cold gun," meaning it was not loaded with live ammunition.