Adam Sandler and Uncut Gem directors have revealed the time the comedian was almost choked to death while filming the Netflix movie.

In the crime drama, Sandler stars as Howard Ratner, a New York City Diamond District jeweller who has an addiction to gambling.

During the movie, his character clashes with Arno's (Eric Bogosian) bodyguards and is repeatedly beaten up. But at one point, one of the actors went a bit too far while manhandling Sandler.

Speaking to Entertainment Weekly, he and the film's directors Josh and Benny Safdie revealed how one scene involving Sandler and two bodyguards nearly ended fatally.

"Sandler's so in it, he's so into the character that it started to actually get a little scary one or two times, because he's getting choked at one point in the scene and there were all these cues," Josh Safdie told the outlet.

"There was one take when Sandler was getting choked and he was trying to tap out, but the actor thought he was just being Howard so he choked harder, and Adam couldn't breathe."

The Safdies said the men who played the bodyguards, Keith William Richards and Tommy Kominik, had never filmed a movie before but were "very professional".

Sandler added that he went home from the Uncut Gems set with bruises multiple times as his character was beaten up so often by Arno's crew.

However, the actor said he still enjoyed working with the film directors and would "die to work with them again."

"I love these guys, I love 'em. I mean, they're incredible filmmakers," Sandler said. "I love having these new friends, we talk all the time, and I think they're just great, great people." 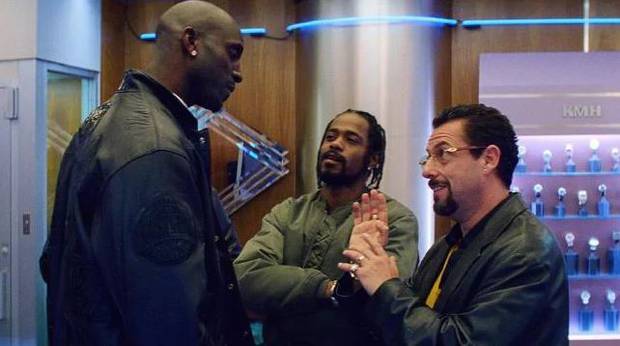 Adam Sandler in a scene from Uncut Gems. (Photo / Supplied)

In February, Sandler decided to clap back at the Oscars after being snubbed out of a nomination for his critically acclaimed performance in Uncut Gems.

In a hilarious and explicit speech, the actor slammed the "featherhead douchebag motherf**kers" of the Oscars when he picked up his award for Best Male Lead at the 35th Film Independent Spirit Awards on the weekend.