A woman sent careening off a Manawatū highway when her car collided head-on with a truck was left dangling upside down and crying out for her boyfriend who wasn't there, a witness says.

Stan Kado was driving directly behind the woman's car on State Highway 1, near Mangaweka at about 9.30pm last night, when she pulled out to overtake a truck ahead of them.

Accelerating up to about 120km/h, she crossed yellow lines and began her overtake on a blind, sweeping corner, Kado said.

"Unfortunately another truck was coming in the opposite direction and she didn't have enough time to go back into her lane, and they crashed head on," he said.

Kado remembered a massive crunching sound before the car flew off the road, skidding and flipping through thick bushes until it came to a halt upside down and "dangling between two trees". 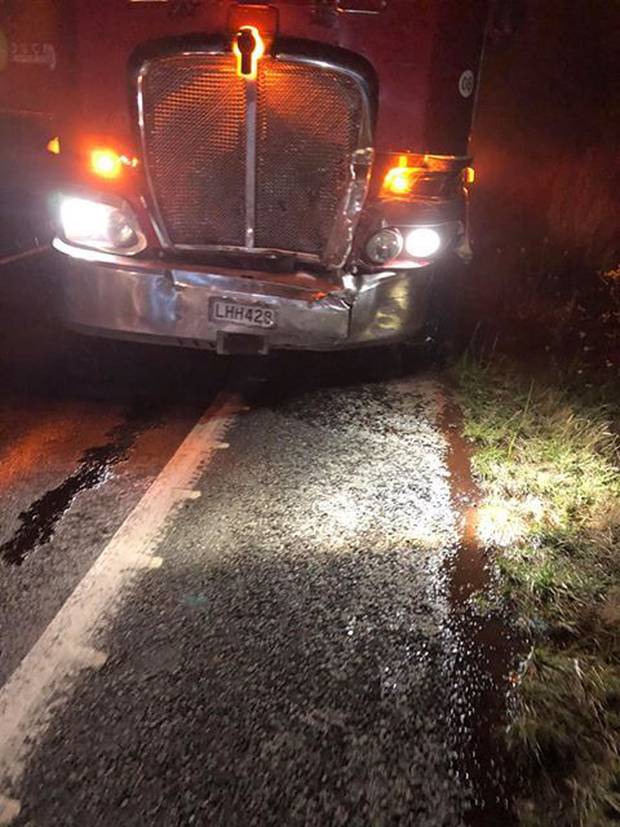 Damage on the truck after the crash. Photo / Stan Kado

Police confirmed they were called to a crash where one person had been initially trapped, while St John said they transported a patient to Whanganui Base Hospital with serious injuries.

Kado and the driver of the truck the woman had been overtaking pulled up quick.

But in the dark they couldn't find the car because it had gone so far through the thick undergrowth.

It was only when they heard the woman's screams - "help, help, help" - that they located her.

"The way the car had crashed, there was really no way to get her out," he said.

"She was very confused, she was bleeding everywhere." 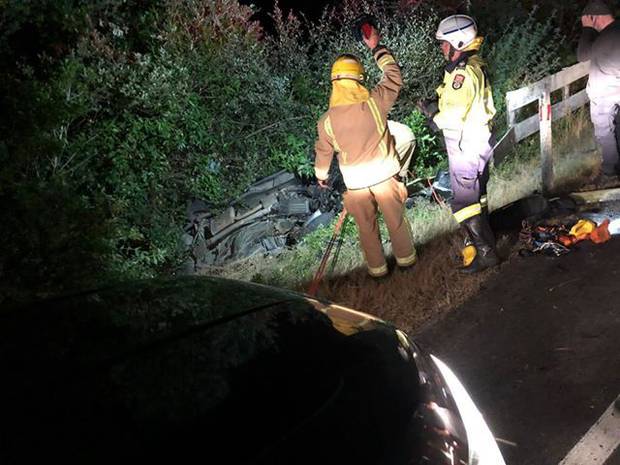 Emergency service teams retrieve the car from the side of the road. Photo / Supplied

The crash had been horrific, Kado said.

He thought the woman had hit a glancing, head-on blow with the oncoming truck that sent her flying from the road and left a trail of debris behind.

"The car was in bits and pieces, the door had flown, everything was in different areas," he said.

"You would see 100m down the road the car's mirror and then the headlights were somewhere else."

Up to five fire trucks and four ambulances were quickly on the scene along with other passing motorists. But reaching the woman wasn't easy, Kado said.

Rescue teams had to climb down through the bushes and there was some flooding underneath the car because of the rain.

The woman was also frantically calling for her boyfriend.

"She was screaming and saying she had her boyfriend with her and none of us knew if she really did or not," Kado said.

He said the car's windscreen had broken, meaning it might have been possible for a person to have been thrown from the car during the crash.

Kado remained an hour at the scene and rescue teams were still searching for the woman's boyfriend when he left. Emergency teams at the scene of the crash. Photo / Stan Kado

However, police have since confirmed only one person was hurt in the crash.

The driver of the truck that collided with the car was uninjured but shaken.

"He was very shocked, he was shaking and scared about what had happened."

Kado said seeing such a horrific crash had served as a reminder to him to always remain calm and think clearly before overtaking on the roads.

"I used to overtake frequently, and I probably have to stop doing that now after what I saw," he said.