A person has sustained serious injuries in a Foxton shooting and police are hunting for the armed offender.

Police confirmed they were responding to the incident and cordons are understood to be in place in the area.

The offender remained on the loose, police said.

"A number of schools have gone into voluntary lockdown as a precautionary measure," police said.

Manawatu College has confirmed it is in lockdown.

Just after midday, Manawatū College principal Bruce McIntyre issued an "urgent notice'' online, telling the public that police had asked the school to go into lockdown because of an incident on Main Street.

"All staff and students are safe and despite rumours, there has been no incident here at Manawatū College.''

A worker at the Foxton Hammer Hardware said they were told a person had been shot.

He said, about 12.15pm, that police were at the back of their building.

He did not see or hear any gunshots, but said they had seen "the aftermath.''

"We've seen the aftermath - it's directly behind us. Someone's got shot,'' he said. "

"We're only hearing bits and pieces." 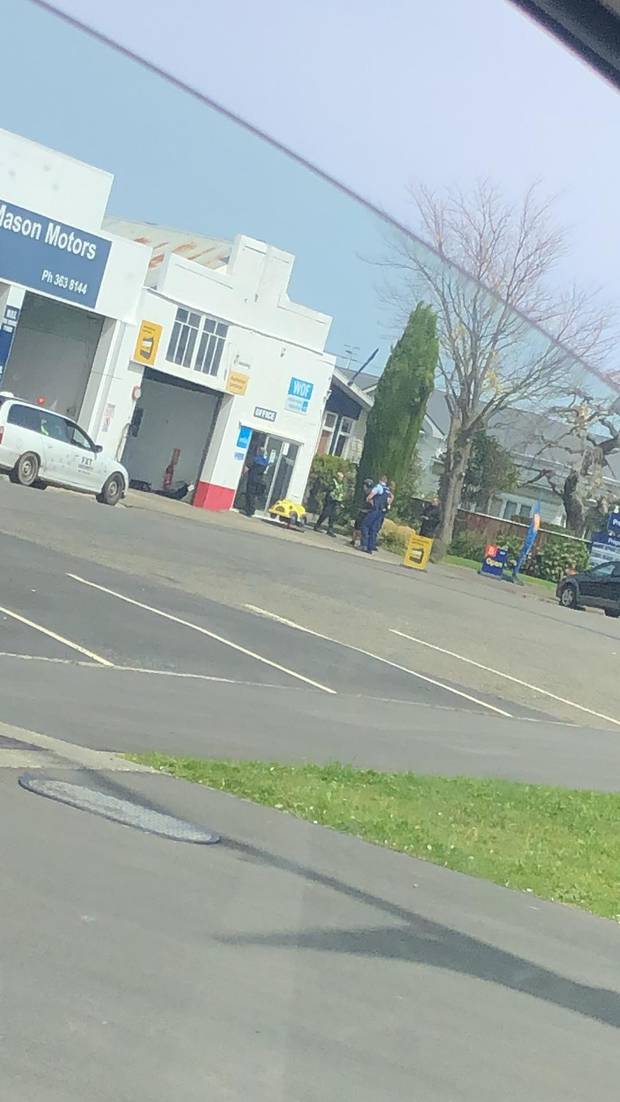 A witness said she saw police cuffing a man around the corner of the Lee Mason Motors building before speaking with him and letting him go. Photo / Supplied

He said the man shot had been taken in an ambulance about 10 minutes before.

A spokesperson said they had a call from police and were asked to going into lockdown due to the armed offender.

A St John spokeswoman said the service received a call to an incident in Foxton at 11.22am.

"We currently have two ambulances on scene," she said.

No patient had been transported yet and all queries would need to go through police, she said.

St Mary's College said they were not in lockdown but had been told to be aware of an issue in the area.

A Foxton woman who was near Sam's Bakery on Russell St saw a police car drive past her with no sirens on and park on Robinson St. The policeman then took his gun out of the boot.

A witness said she saw police cuffing a man around the corner of the Lee Mason Motors building before speaking with him and letting him go. Photo / Supplied

A witness said she saw police handcuffing a man next to the Lee Mason Motors on Clyde St.

"They cuffed him around the corner of a building and then talked to him, took his cuffs off and let him walk off," she said.

Officers had then returned to the alleyway between Hammer Hardware and Professionals Real Estate on Main St.

An employee at Lee Mason said he was staying inside with the doors closed and had no information on what was happening.