A central Auckland worker has described the horror of hearing a mother screaming for her baby as a double decker bus rolled over her and her child's pram.

Satender Phogat, who works at Kebab Time on Victoria St, said people were crossing the road on the green pedestrian light when he noticed the bus rolling backwards just after 1pm.

He ran outside and noticed the driver was not in the bus which was travelling at 10 to 12km/h so his initial reaction was to try to stop it.

"I was not expecting the bus going backwards without the driver."

He said he tried to stop the bus, but it was too heavy.

Within a few seconds other people including workers at the nearby construction site also helped. 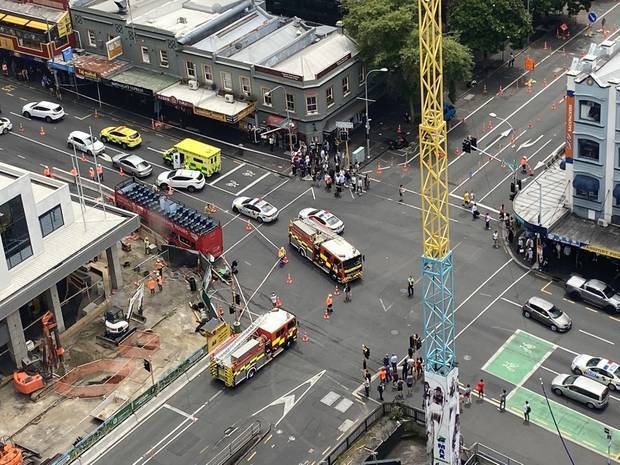 But by then a mum who was pushing a stroller with a baby had disappeared under the bus.

The City Sightseeing Tours bus crashed into a construction site on the corner of Victoria and Albert Sts.

"I was in shock. I didn't want to see what happened because she was screaming and
I can't see and explain what happened..."

An older woman then stepped in behind the bus and pulled the mother out.

"She was saying, 'Oh my baby, my baby was there and is under the bus'."

The bus driver then started running after the bus as if to hop in it and Phogat told him to stop and not to move the bus as there was someone under it.

Phogat and another man who worked nearby then grabbed the baby, who was miraculously uninjured.

"The baby [went] under the bus from the back tyre and we take out [the child] from the front tyre so the whole bus passed through the baby.

"The mum was struck out the back and mum is alright too so thank God there's no harm and no injury, it was totally incredible..." 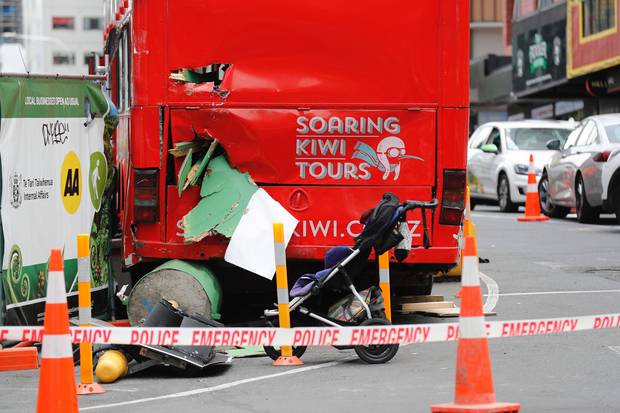 The pram could be seen behind the crashed bus after the incident. Photo / Dean Purcell

He said he checked the baby's hands and feet and the child appeared not to have been hurt.

"It's a miracle they were safe. I was expecting they must be dead under the bus."

Phogat said he didn't feel like a hero and never wanted to see anything like it again in his life.

"I don't want to see this situation. My heart rate is like.. my total body was sweating."

He said he spoke to the older woman who pulled the woman out and she said she wasn't thinking clearly when she stepped behind the bus to help. Her body just reacted to the situation.

Phogat said the bus driver was in shock and kept asking over and over again if anyone was under the vehicle and they had to reassure him everyone was ok.

It appeared the bus wasn't in gear and the handbrake was off, which caused it to roll backwards, Phogat said.

Jade Smith was just walking out of Countdown on Victoria Street west when she heard a huge bang and people screaming.

"At first I thought it was some kind of bomb as it was so loud but heard someone shouting 'the baby' so ran towards the bus – then I see a bus coming backwards down the hill and a pram behind it with no child in."

"A huge crown ran towards the bus as soon as they heard a child was involved to try to help. As far as I knew- there was a mum & child under the bus which made my heart (sic) sink."

People were crying and in shock, she said.