Six helicopters and one fix-winged aircraft are fighting the 15ha fire near Tangoio Settlement Road, about 20km north of Napier, but may also have to pull out if the wind worsens.

Up to 65 ground crew had been at the scene which is believed to be on land owned by Forest Management New Zealand, who have been approached for comment.

Fire and Emergency NZ spokesman Murray Dunbar said if the air crews were withdrawn, the fire would spread further into the forest.

"There will be virtually no firefighting happening."

At 5.30pm, appliances were protecting one home in the area as a precaution.

out west of Hastings, at Fernhill near State Highway 50.

Five appliances and one tanker attended that blaze, which had threatened to spread to nearby properties before it was brought under control. 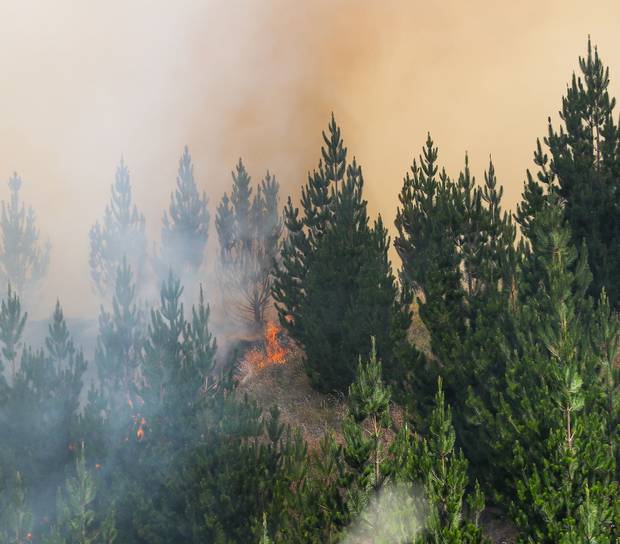 The northern front of the fire, near Tangoia Settlement Rd, about 3 km from SH2. Photo / Warren Buckland

About 3.45pm, further north in Mohaka, two appliances, a tanker and a helicopter had battled a scrub fire, which at one stage threatened a property on West Beach Road.

Mason Summerfield, a witness to the Tangoio fire, said by 3.30pm ash was starting to fall at their bach in nearby Waipatiki.

Earlier in the day he and his daughters Lucy and Harriet said they could see a lot of smoke, and smell the burning Tangoio forest.

Summerfield said the fire had looked quite far away, and he was not concerned about his property. He said the area around Waipatiki had had recent rain and was still fairly "green".

The fire was large enough smoke could be seen by the Japanese Meteorological Agency satellite, 36,000km above the Earth's surface.A Pan Pac spokesperson said the fire had broken out on the border of its land.

"The fire started in Forest Management New Zealand forest, so it's right on our boundary.

"I haven't had an update recently whether its on our land yet or not, but we've got land at risk." Smoke is spreading from the fire near Tangoio. Photo / Michelle Taiki

Another witness had told Hawke's Bay Today the fire was visible from Hardinge Rd, Ahuriri.

"The smoke is definitely spreading, it looks large."

MetService Meteorologist Lewis Ferris said while the wind, which gusted as strong as 196km/h at Hawke's Bay's Cape Turnagain on Sunday, would pull back from midnight, it would be unlikely to die out completely until Tuesday evening.

He said, while there were isolated showers forecast for Tuesday, there was no steady rain predicted which would help fight the blaze.

The blazes were among at least eight vegetation fires yesterday in Hawke's Bay, from Mohaka in the north to Porangahau in the south.