A bus has rolled near Queenstown, blocking the road and leaving 20 people hurt, with two occupants suffering serious injuries.

The crash occurred on Glenorchy-Queenstown Rd about 7km southwest of Queenstown. The bus came to rest on its side.

A local resident described seeing the walking wounded at the scene being cared for by St John ambulance staff.

She told the Otago Daily Times the bus and a luggage trailer had flipped on to its side and blocked both sides of the road.

The windscreen was smashed, but that could have possibly been done by rescuers. 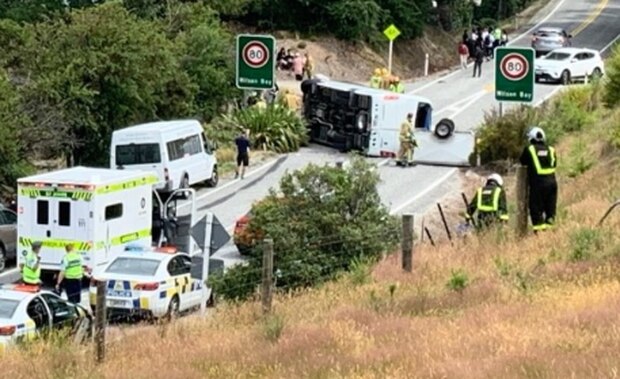 The scene of the crash. Photo / James Allan

"It doesn't actually look that damaged," she said.

The crash happened on a "very sharp" bend where there had been crashes before, but they mostly happened in winter.

She did not get close enough to see the seriously injured patients, but had seen a helicopter land.

The woman praised the work of emergency services staff and said the scene was remarkably calm given the seriousness of the crash.

A St John spokesman said ambulance officers had treated 20 patients - two with serious injuries, one with moderate injuries and the remainder with minor injuries.

"We are still on scene and the patients will be transported to Dunedin and Lakes District Hospitals."

Two helicopters are on their way to the scene.

Three ambulances are already on the scene, accompanied by a manager.

The crash happened about 1.45pm and the road, just south of Closeburn Rd, is currently blocked.

The Serious Crash Unit has been notified and motorists are advised to avoid the area. 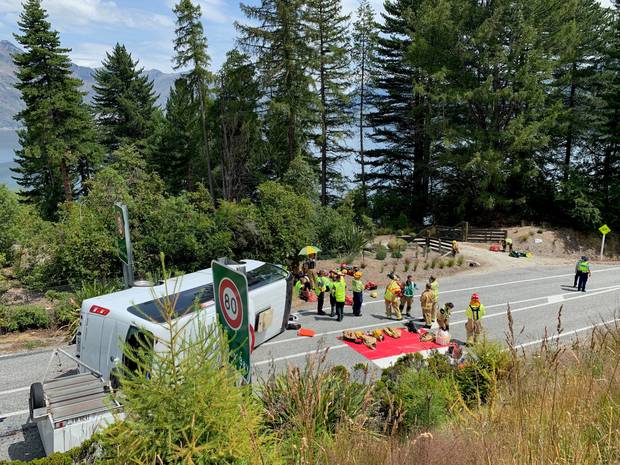