A woman was taken from the scene on a stretcher when a red four door sedan was driven off Somme Pde down a bank this afternoon.

The vehicle came to a halt in a vertical position up against the Aramoho-Wanganui Rowing Club between Gibson and George streets.

Judith Kenny was getting a new tyre at Cooper Tyres when she heard a crash and then saw smoke billowing from the scene.

"I ran over to see what I could do to help and there was a car over the bank. It was in a vertical position," Kenny said.

"I didn't see people at first, but then I saw two. One seemed not that great, she was just sitting there." A car has tumbled down thre river bank off Somme Pde.

Emergency services arrived at the scene swiftly having been called from the scene of a another crash on Victoria Ave that they were attending.

That crash involved a single vehicle outside of Bottle-O and involved one vehicle which remained on the side of the road.

Both roads were closed briefly but have since re-opened.

A tow truck was retreiving the Somme Pde vehicle. 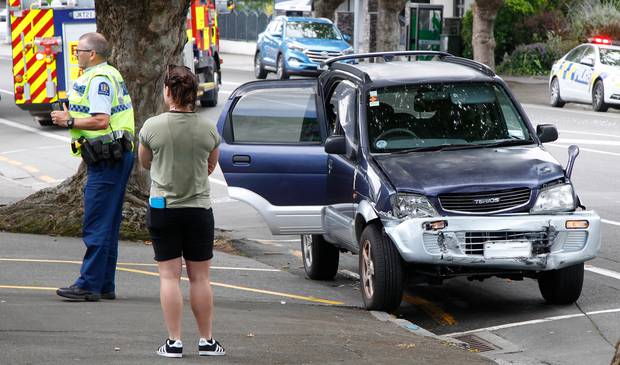