A fire has broken out at an office building in downtown Auckland, with smoke billowing from the site.

Fire and Emergency are responding to the smoke-logged Group M building on Fanshawe St near the corner of Federal St.

Fanshawe St is closed between Albert St and Hobson St in downtown Auckland.

Buses and cars are being re-routed.

A witness said there was a strong smell of smoke. The lower floors of the building appeared to be smoke logged, with no visibility into the windows.

The fire is believed to have broken out on the first floor.

Firefighters with oxygen tanks were assessing the building's upper floors from aerial units.

A ground crew appeared to be preparing to enter the building's main entrance with hoses.

When called by the Herald, Fire and Emergency said they were too busy responding to the incident to give details of the fire.

St John haven't been called to the scene. 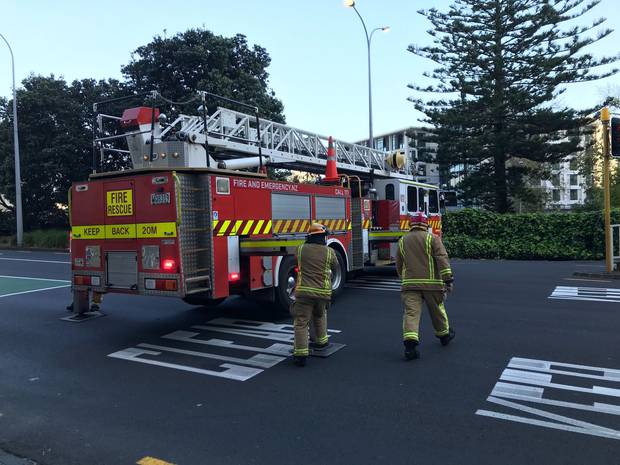 Fanshawe St is closed between Albert St and Hobson St while Fire and Emergency respond to the building fire. Photo / Lane Nichols

The witness said he could see at least eight fire trucks plus several other Fire and Emergency New Zealand vehicles.

There were sirens ringing out across the city as more emergency services personnel arrived on the scene.

Water was flowing down Federal St as FENZ personnel attached hoses in preparation for entering the building to fight the blaze.

A crowd of onlookers had gathered nearby to watch the action unfold. Traffic and commuter buses were backed up along Fanshawe St, which had been completely blocked off by two FENZ aerial units parked horizontally across the street.

Police said officers are assisting with traffic management with cordons in place on Hobson St and Fanshawe St.

A spokesman said just before 9.30am that those cordons are expected to be lifted shortly.

Media company GroupM moved 120 employees into the building on February 2016.