Primary teachers' leaders are urging members to keep fighting into next year so they can be joined by secondary teachers.

NZ Educational Institute president Lynda Stuart told a teachers' strike meeting at Alexandra Park this morning that they should prepare for "the fight of our professional lives" if they reject the latest pay offer.

"What we are asking you to do today is to consider: do you want to accept this offer and move on, or hunker down, make it to the end of the year, and come back in 2019 for the fight of our professional lives?" she said.

"If we decide to show the ministry that their tactic of drawing it out won't work, we will have some strength coming.

"Our PPTA [Post Primary Teachers Association] colleagues will most likely join with us in term one of 2019.

"Our national executive are meeting with theirs at the end of this week. We have their back and they have ours.

"For the first time ever, we would see professional unity with primary and secondary simultaneously committed and mobilised." 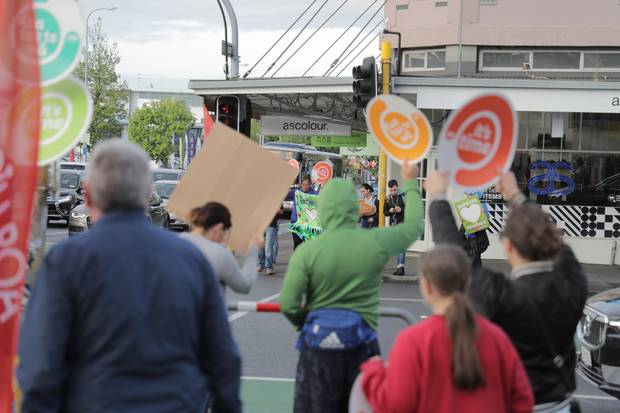 Another speaker who spoke from the stage before media were excluded said the Government could afford to pay more if it chose to.

"To win, we will need to force the Government to change the fiscal rules they have committed to," he said.

The meeting is one of 30 being held around Auckland today, with more planned through the rest of the country later this week.

None of the 50 teachers and supporters at a rally on the corner of Karangahape Rd and Ponsonby Rd thought last Thursday's pay offer from the Ministry of Education was enough.

The mood was enthusiastic as the group marched around the intersection waving flags and chanting, "Time to teach, time to lead, this is what our children need."

The NZ Educational Institute wants to double the time allowed for teacher professional development outside the classroom from one hour to two hours each week - still well below the five hours a week that secondary teachers get.

It also wants to reduce class sizes in Years 4 to 8 by lowering the teacher/student ratio from 1:29 to 1:25.

NZEI president Lynda Stuart said the ministry had not offered anything on workload or class sizes.

"They say they can't put that into a collective contract," she said.

"We just want it in our terms of settlement that they are going to address that issue. It doesn't need to happen within two years or three years, but we do need to see an indication around that."

"We want to attract more teachers to the profession. We are really desperate for teachers," she said.

"We actually need to make it attractive with a pay increase. It's getting harder and harder to live and work in Auckland." 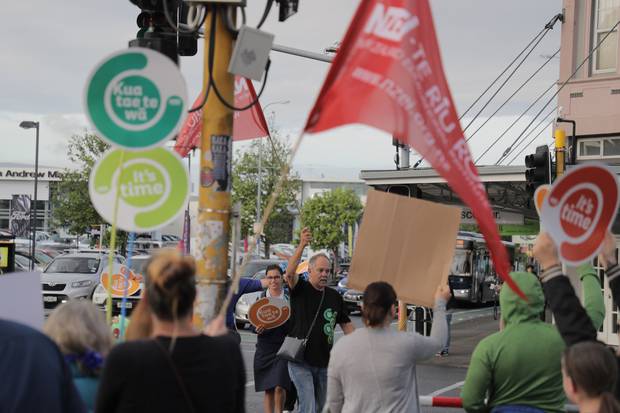 Justin Barlow, who has been teaching for 24 years, said he was "seriously looking at finishing this year".

"Children bring all the social issues to school and I was not trained to do that. I was just trained to teach.

"We are all qualified with degrees, masters, and sometimes I feel that it's taken as a bit of a joke."

Trish Hadfield, a resource teacher of learning and behaviour, said schools were short-staffed and teachers were "leaving by the day".

"It's more about time to teach. Teachers are stretched so thin," she said.

Patricia Atama-Tamati, a second-year Māori immersion teacher, said her pay of $47,000 a year left her with only $200 a week after paying for rent and petrol.

"The offer is pathetic," she said.

"We are pretty much working seven days a week from the early hours in the morning to get work ready and get assessments marked. We are working around the clock - try and get quality teachers for $47,000 a year!"

Newton Central principal Riki Teteina, who was leading the chants on the microphone, said he recruited NZ teachers as principal of international schools in Thailand and Indonesia before returning to New Zealand recently.

"I have employed hundreds of teachers into international schools from New Zealand. They have left the country because they feel underpaid, undervalued and overworked," he said. "This [offer] is not going to convince those people who have been working overseas to come back to New Zealand.

"The key things are the issues around workload and the huge amount of compliance, such as large class sizes. Teachers have tolerated this for too long."

The teachers are meeting at 10am in venues around Auckland to debate the Government's latest offer, but will not vote on it until an electronic ballot is held in about two weeks' time.