Primary school teacher Mazlinah binte Haji Mohamad Noor never thought she would struggle to find work when she moved to Wellington in 2017 - especially when New Zealand is facing a teacher shortage.

But after applying for more than 200 roles, Mazlinah, 55, has had little interest from employers and managed to only get five interviews and no offer of a permanent job.

Believing something isn't right, her husband David Blocksidge, 68, got her to ask schools for the reasons for not being shortlisted - and concluded the responses show "a toxic mix of institutional bias, Islamophobia and unconscious bias".

Mazlinah, who is Muslim and wears a hijab, said at one school the interviewer rolled her eyes when she walked in and before she could even say a word. 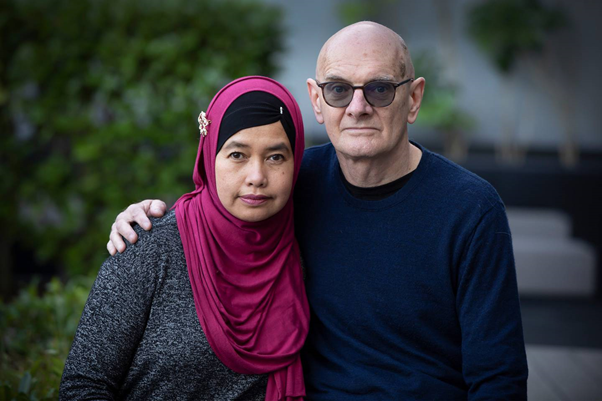 "I tried to stay calm and professional, but I was feeling 'what's the point'. I am already being judged by my name and what I wear, and I'm not going to make it again," she said.

Originally from Singapore, Mazlinah taught primary school students aged between 7 and 12 for nearly 20 years and was the school's art coordinator, before moving to Auckland at a time of reported teacher shortages in 2009.

Despite the teacher shortage, the only full-time work she has managed to get was at the Al-Madinah School, a state-integrated Islamic school in Auckland where she worked from 2010 until she moved to Wellington in 2017. Mazlinah Binte Haji Mohamad Noor's only permanent job since moving to NZ 13 years ago was at an Islamic school. Photo / Brett Phibbs

At another school, where she was rejected for the sixth time, Mazlinah was told: "We wish you well in future applications and invite you to apply again should another position become available".

"I began keeping records of emails and her applications and rejections when I started to see a pattern emerging. You can't statistically apply for that many jobs, and not even get interviews," Blocksidge said.

"Clearly there is widespread bias and Islamophobia, but it's virtually impossible to prove and I liken it to a hole: by definition you can't see it but it's there all the same. We feel it, and people like Maz feel it more than others."

Mazlinah, a New Zealand citizen since 2015, is getting by through jobs on fixed-term contacts - she has had four so far and starting a fifth.

She said the repeated failure to secure full-time work had severely affected her self confidence and esteem, and believed one of the biggest obstacles was her Muslim name.

"I've tried changing my name in my application to Mazlinah Blocksidge, but I can't run away from my Muslim name in my teaching certificates and licence," Mazlinah said.

"I feel disappointed naturally, my confidence is hit, I ask myself 'what's wrong with me'."

"While my research has shown that many Muslims love this country that they call home, and many have found no problem in accessing and progressing in work, yet there remain some who bear the brunt of Islamophobia," Pio said.

"It is significant to remember that the often negative images of Islam are in sharp contrast to its etymology, which means peace."

She said with the rapidly changing demographic profile of New Zealand, organisations must be agile in how they perceive migrants who openly practice their faith "to reap the rich harvest of wonderful skills, qualifications and innovation" these individuals and communities have.

"Yet, timidity and intolerance of difference seem to be the leitmotif in many organisations, which must buckle up to ensure their survival," Pio added.