The vast majority of school staff appear to be on board with a new education vaccination mandate - but a small number have taken drastic action and resigned in protest.

Yesterday the Government announced all teachers and other staff in contact with children at schools or early learning centres must be fully vaccinated against Covid-19 by January 1, with a first dose by November 15.

The Ministry of Education has confirmed to the Herald that the mandate applies to all schools, including private schools.

At least one teacher and two teacher aides have resigned in protest, while a protest group is promising to hold a "strike" in Auckland against what they see as an imposition on teachers' freedoms. It's not known how many of the group are teachers.

NZ Principals Federation president Perry Rush was aware of two teacher aides and one teacher that had quit their jobs since yesterday's announcement. NZ Principals' Federation president Perry Rush says principals are having hard conversations in a "vacuum" of information about the mandate. Photo / Mark Mitchell

He worried that might have been an unnecessary move made without knowing all the details of the mandate. Principals were having serious conversations with staff about their future employment in a "vacuum" of information.

"There's just guesswork taking place about whether it really means 'no jab, no job'" when there could be other alternatives for those people, he said.

"We really have to act in ways that preserve our humanity when it comes to people's employment."

He did not know how many staff would be affected across the primary sector.

The Ministry of Education had set up a working group with the sector today but the details should have already been worked out, Rush said - given there are just four weeks until the first dose deadline.

PPTA Auckland regional chair Michael Tarry said overnight just one member out of 20,000 had resigned their membership to protest at the union's pro-mandate stance.

He anticipated very few high school teachers would refuse the vaccine - not enough to cause significant staffing shortages.

The PPTA would make sure that fair and just processes were followed for those people, he said.

"We'd be making sure they're not just terminated - getting an email saying don't come in in the morning."

But they probably shouldn't expect a redundancy payout as they would be in a similar situation if they tried to work in a school without current practising certification.

"It's not that the school's firing them - the school cannot employ them."

The PPTA would also work with those who could not be vaccinated for medical reasons - they could possibly get medical retirement or be moved into different roles or work from home.

An Auckland member survey last week found about 85 per cent would support a mandate, with most others holding some concerns about making it compulsory. Almost none were "hardcore anti vaxx", Tarry said.

"We know from jurisdictions overseas that compulsory vaccinations tip a lot of them over to become vaccine positive - they just need a final push."

Tarry was aware of groups organising protests via social media, but it was impossible to tell if they were teachers, he said.

An event set up on Facebook last night called for teachers to breach the health order and attend an in-person strike in Auckland to protest against the new mandate. The creators were Nicolle Porterfield and Greg McInnes, neither of whom are registered as teachers on the Teaching Council's website.

Porterfield told the Herald she had worked in early childhood education in the past and was studying education, so the mandate would affect her when she graduated.

The page had been taken down because of the controversy aimed at its creators but not before more than 300 people had expressed an interest over two hours.

"People are extremely upset about this mandate. There is confusion over our rights and how legal the mandate is."

She said she had received messages from people in tears, devastated that their career was over and wondering how they would provide for their families.

Porterfield said many of those opposed to the vaccine mandate were not anti-vaxx but were not convinced whether it was safe.

Another Facebook group opposing the mandate was set up by a group affiliated to the Freedoms & Rights Coalition, which organised September's protest in Auckland Domain. 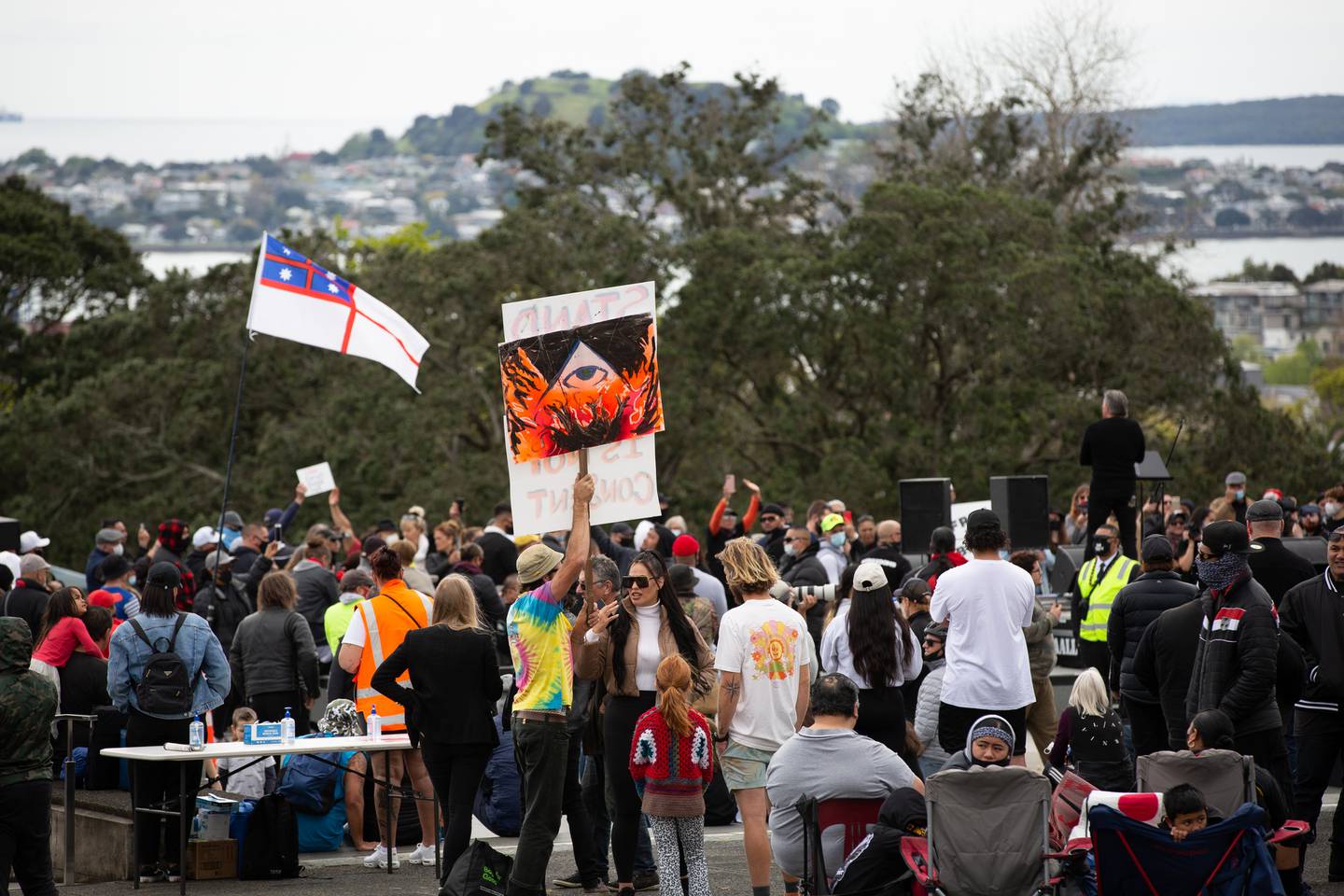 Thousands of people gathered in the Auckland Domain for an anti-lockdown protest organised by the Freedoms & Rights Coalition in September. Photo / Sylvie Whinray

At least two of the group's administrators are linked to Destiny Church, with one a teacher at Destiny School.

Destiny Church spokeswoman Anne Williamson said, regarding the mandate, that she believed the church had a pathway forward for its school - she would be able to comment later this week.

Auckland's City Impact Church also promoted the anti-lockdown rally in September, and has stated people should be free to choose whether to be vaccinated.

But the church has a school and early childhood services attached - meaning staff will be required to get the vaccine like everyone else.

He thought the majority of staff at the school and early learning service would be vaccinated but didn't know numbers. There would be some who weren't and culling them would cause staffing issues, he said. But he said as a church, they had to follow the law. "So obviously we're going to have to work it through."

Mortlock said there was a lot of anxiety and fear in the office this morning, with some staff in tears.

He declined to tell the Herald whether he had been vaccinated against Covid, saying he did not believe in making people disclose private health information.

Rotorua Intermediate School principal Garry De Thierry told Mike Hosking on Newstalk ZB this morning he believed about "95 per cent plus" of his staff would be keen to get the vaccine. A number of staff had questioned the vaccine mandate but it was mainly about their own health issues.

He said it was a shame the deadline was not the end of term four. If there were staffing issues across New Zealand, there would be a mad scramble to get staff on board in the short period before the start of the school year.

He intended to sort it out sooner to ensure he was fully staffed for 2022.