An "Oscars" skit at Auckland Grammar School is under fire after prefects gave out maths and science awards to stereotypical Asian names such as "Ching" and "Chong".

A Year 13 student at the school said the prefects' skit, presented at a school assembly this morning, was based on the Oscars because that was the theme of this year's school ball.

"In the skit, they included a segment of the best math and science students, which was presented by the head boy of our school who was white. And the students who were given this award in this skit were named after stereotypical Asian names such as Ching, Chong, Ling, etc," the student said in an email to the Herald.

"What I find extremely concerning is that I have heard that the headmaster of our school, Tim O'Connor, actually looks over the script and approves what is allowed to get kept in the skit and what isn't.

"What's worse is that they have made this joke every year that I've attended this school. I cannot confirm this, but the person who wrote the script itself was a white person.

"I just find this extremely offensive as an Asian that they preach about being a 'Grammar Man', while making jokes like these which unfortunately does make people laugh, but at what cost?

"It's sad that the majority of the school didn't even question how it would affect Asians who did experience racism growing up. I hope that people understand that it's not just a joke." 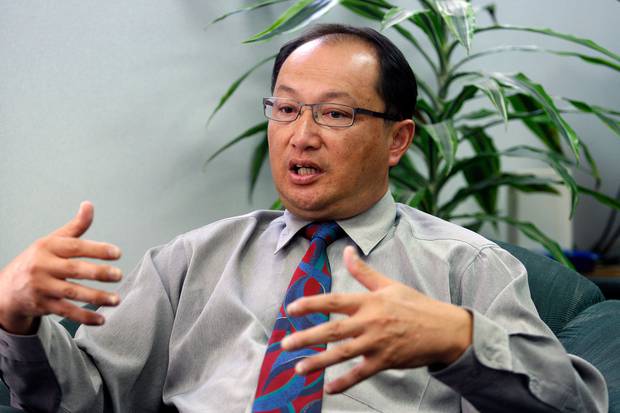 Meng Foon: "Any form of racism, regardless of whether it is a joke or not, should not be tolerated." Photo / Sarah Ivey

Race Relations Commissioner Meng Foon commended the student who exposed the incident and said he would write to the school about it.

"Any form of racism, regardless of whether it is a joke or not, should not be tolerated," he said.

"I want to commend the person that actually wrote this as an open letter to the Herald. Both parties need to be safe. I offer my support to the headmaster, Tim O'Connor, and to the student body itself.

"I am willing to go to the school and facilitate a process for them to ensure that this kind of racism does not happen going forward."

Foon, who attended Gisborne Boys' High School in the 1970s when the school played rugby against Grammar, said the Auckland school was renowned for its educational achievement.

"But this type of behaviour is to be condemned, and, you know, what sort of message is the school sending out to future customers of theirs, because I guarantee that a large amount of their customers are fee-paying customers from overseas," he said.

"We pride ourselves on being a multicultural school respecting the 33 ethnicities that make up our student body and do not condone racism. Academic aspiration for all students is a primary part of who we are," he said.

"I have contacted Race Relations Commissioner Meng Foon and I am also happy to meet with the student to discuss any concerns."

On July 1, 171 students or 7 per cent of Grammar's 2603 students were fee-paying international students.

Another 975 students (37 per cent) were NZ residents of Asian ethnicity, almost equal to the 1009 (39 per cent) of European ethnicity.

The incident comes at a time of heightened awareness of racism stemming from the Black Lives Matter protests in the United States, which sparked complaints about use of the "n" word at two other Auckland schools, Lynfield College and St Cuthbert's College.

Foon has also spoken out this year against anti-Chinese behaviour stemming from the origins of Covid-19 in China.