A large scrub fire that tore across hills above central Dunedin yesterday is being treated as suspicious.

The news comes as the remaining families evacuated last night were cleared to return to their homes today.

Principal Rural Fire Officer Graeme Still said today the blaze was being treated as suspicious, and a specialist fire investigator would be at the scene -in the Flagstaff area - this afternoon.

"It's odd where it started, that's all," Still said, when asked about the possible cause.

"All I can say is it's in the middle of nowhere."

At a briefing this morning, Fire and Emergency New Zealand Assistant Area Commander Craig Geddes Geddes praised the work of helicopter crews who battled the blaze yesterday, saying they were able to "knock the sting out" of it. 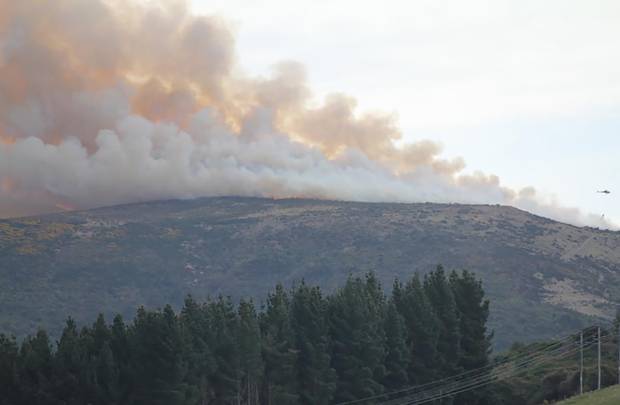 Smoke could be seen from large parts of the city yesterday. Photo / ODT

He said the blaze had been contained but was "certainly not out".

Speaking to those who had to spend a night away from their homes, he thanked them for their cooperation, and said the nature of the fuel type on the hill and the possibility of changing winds had prompted the decision to evacuate.

Still said native bush slowed the fire down yesterday, allowing crews to gain some control. Today, efforts would concentrate on ensuring the perimeter was extinguished, by damping down any hotspots.

Fire and Emergency New Zealand (Fenz) regional controller Laurence Voight last night confirmed the fire was "under control'' shortly before 7pm and helicopters had been stood down for the night.

Ground crews were to monitor the scene overnight in case of flare-ups, but he praised the efforts of fire crews - together with the timely arrival of some late afternoon rain - for helping tackle the blaze in "very challenging conditions''.