For the few minutes it took for a man to sustain critical injuries, there were witnesses enough on the Waikato Expressway to put his attackers behind bars.

But for detectives investigating the case, getting a successful prosecution will require rebuilding that exact moment in time - and overcoming the intimidation radiated by one of New Zealand's most notorious gangs.

Perhaps one of the greatest complexities detectives will have to overcome in this case is the fact that members of the gang, understood to be the Tribesmen, who were at the core of the attack, are unlikely to turn on one another as they adhere to a significant code of silence.

Witnesses, with no affiliation to those involved, could also be reluctant to give evidence against the people they saw viciously assaulting the 31-year-old man.

The assault followed scenes of a convoy of around 70 motorcycles driving erratically - and some on the wrong side of the road - as they tailed the victim's red utility.

A source told the NZ Herald one of the riders was clipped by the vehicle, and when the vehicle's occupants stopped to check on the rider they were attacked.

Police confirmed yesterday that the victim remains in hospital in a stable condition. 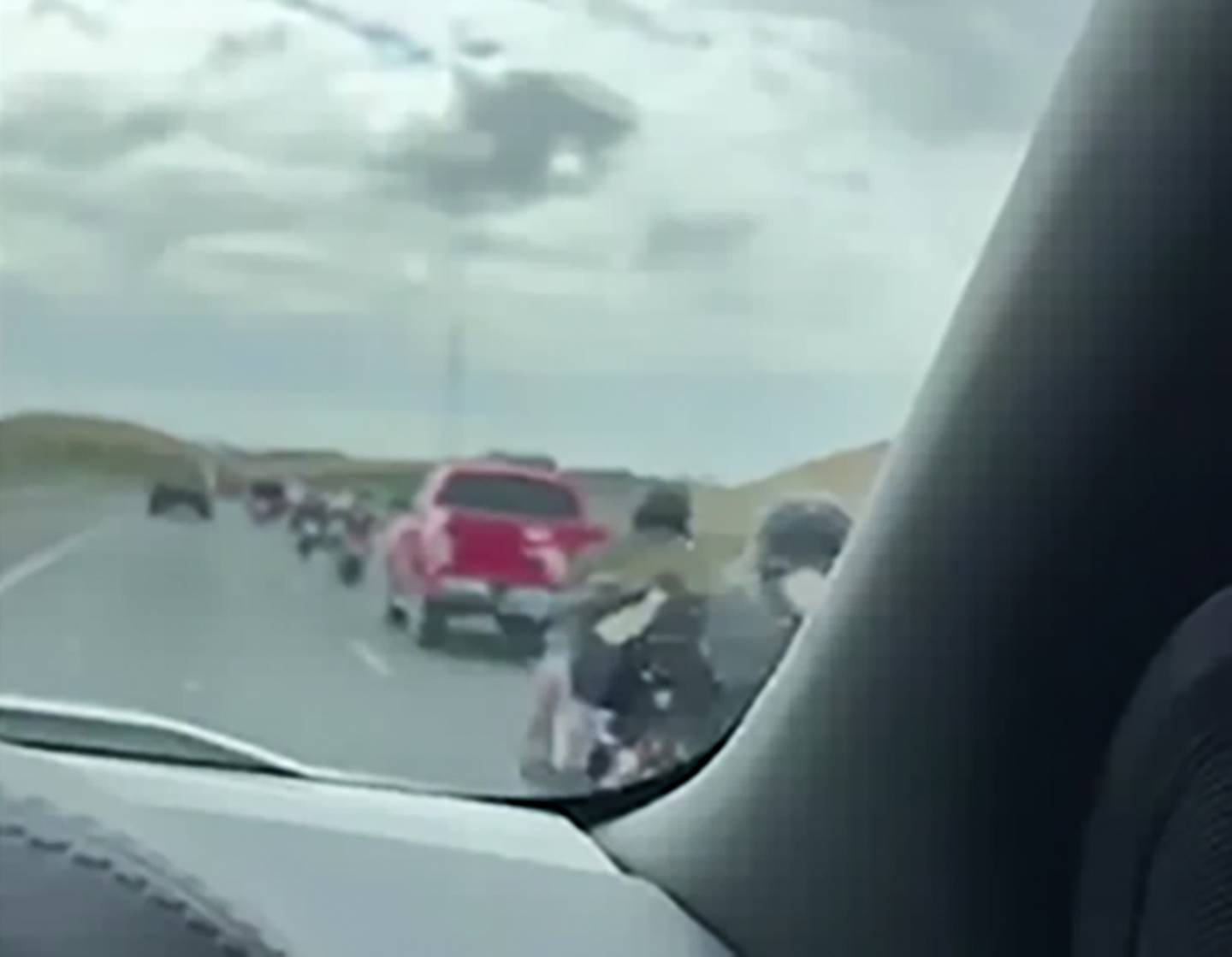 Still from a video shows a red utility vehicle being chased by members of a motorcycle gang on the Waikato Expressway. Photo / Supplied

Having a number of witnesses and the assault happening in daylight on a highway should make for an easy conviction, most would think.

However, former police officer Lance Burdett explains the investigation may not be that straightforward.

"Because it's a gang involved it might get people to second-think if they were going to report something," he said.

"It's happened before where witnesses have been threatened or intimidated."

One motorist even felt that intimidation on the day.

Prior to the attack they had noticed how "aggressive" and "wild" the group was behaving and decided to start recording.

Soon afterwards and in a panic, they dropped their phone when they were greeted at their car window by one gang member who had indicated they'd seen them recording.

The assault happened just south of Rangiriri in rural Waikato where the distance between homes are vast and in this case - three road lanes and two railway lines over from the side of the road where the events unfolded.

Initial inquiries would include obtaining CCTV footage and making local inquiries - neither of which might not produce the results detectives would hope for, given the remoteness of that area.

In a lot of circumstances CCTV footage is very helpful - it can allow police to make a positive identification of an offender and subsequently an arrest without a complainant even coming forward.

But even if there was footage of the harrowing assault, University of Canterbury gang expert Jarrod Gilbert said being able to identify the offenders could be difficult, as they were all wearing helmets.

In this initial phase of investigation, police would also conduct scene examinations to gather forensic evidence such as weapons, identifying objects and fingerprints.

Detectives would broaden their investigation to covert tactics, and police squads dedicated to organised crime would be pulling together intelligence they had on the gang.

If they are able to, they would also liaise with criminal informants within the gang scene who may have details on the incident.

When detectives were able to obtain sufficient evidence they'd be able to seek search warrants to go into gang-related establishments.

"They will want to make sure that the information is authentic and with gang involvement in particular you have to build a case - you build a case first before you go and speak to the people, it doesn't matter who it is," said Burdett.

With a search warrant they'd be able to look for further supporting evidence of people's involvement and try to extract information from those at the locations.

They'd also be looking to get as much evidence as they can to warrant electronic surveillance to be able to watch those they suspected in a covert manner.

The entire investigation could take up to a year but through covert and overt means of gathering information, detectives will eventually be led to suspects.

Burdett said the person or people of interest would be spoken to last.

"They'll be wanting to make sure they have got sufficient evidence and enough witnesses until they make that final move," he said.

"As a general rule you only get one shot at this and the chance is that the person isn't going to say anything, but that doesn't matter at that point if they have enough information."