A victim of the former financial executive caught stealing rabbits says he spent thousands of dollars on alarms, flood lights and security cameras to protect his surviving animals.

"He stole six of my rabbits, most of which were pets, one of which was a mother with a litter that subsequently died," the man told the Herald.

"It broke my heart, and to have him get name suppression for so long ... it made me sick."

Robbie Lawrence was of course talking about Fergus Rebel McMahon, the Auckland businessman who was unmasked by the Herald on Sunday this week as a serial bunny burglar.

The ex-financial executive was convicted and sentenced in May over 11 charges, eight of which were representative for 22 burglaries.

He also faced two other theft charges for stealing rabbits and a careless driving charge.

Fergus McMahon, then known as Brendan Francis McMahon, pictured on his mobile phone outside a courthouse in Sydney in 2005. Photo / Getty Images

But the details of what the 51-year-old was doing remained suppressed by the courts until a successful High Court appeal by the Herald this year - long after pets first began disappearing from their homes in September 2016.

Lawrence's rabbits were some of those stolen during the spring of 2016.

They included Tabitha, the mother of the litter which perished without her care, and Fatty.

"Both were well loved pets, often indoors for cuddles or freely running in the garden that was otherwise secure - except from Fergus."

McMahon's modus operandi would see him contact rabbit owners or breeders online before - under a cloud of meth - sneaking into their properties at night.

CCTV images released by police in 2016 show him crawling along the backyard of a home as he steals rabbits from their cages and hutches.

One rabbit owner earlier told the Herald of the night McMahon came to her Blockhouse Bay home just before Labour Weekend in 2016.

"I heard this human noise from my window at one o'clock in the morning or something and the thought crossed my mind – bunny burglar?

"Then I heard the squealing of my rabbits."

Lawrence recalled his first contact with McMahon was an online message.

"He contacted me about some rabbits via Trade Me, wanting them for his daughter," he said. "He text saying he'd arrive in 15 minutes but didn't show. Later that night he was caught casing out our property across the fence." Tabitha was the mother of a litter and a beloved pet. Photo / Supplied

McMahon bought two rabbits from Lawrence's home "only to come back in the early hours to steal two additional rabbits".

"A couple of weeks later he returned for four more, including Tabitha and Fatty, who would have thought of him as a friend as they did everyone."

Lawrence said he has since moved from Auckland and still feels uneasy about McMahon.

"Within a few days of his second burglary at our property we found the details of his Australian offending by chance when we were advertising on Trade Me for a surrogate mother rabbit for the orphaned kits ... a member posted 'I hope it's not this guy'."

In 2006, McMahon was jailed in Sydney but later acquitted on mental illness grounds for what was described as "one of the worst case scenarios of aggravated cruelty to animals" in Australia.

McMahon, then known as Brendan Francis McMahon, was arrested after dead or dying animals - some of which had been skinned - were found in and around his downtown Sydney office.

The allegations against him included the torture and mutilation of 17 rabbits and a guinea pig. He also faced a charge of bestiality, but this was later withdrawn. 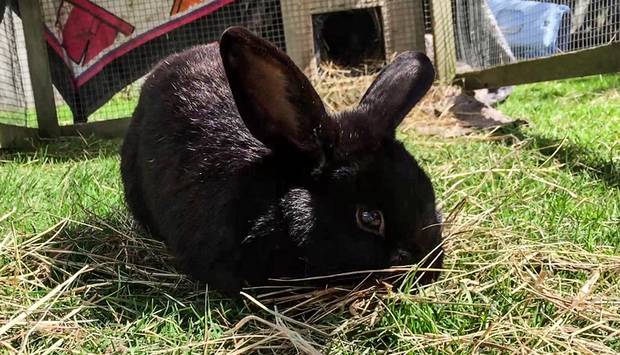 Lawrence said he provided police with information about McMahon's history during several interviews.

"At this point we spent several thousand dollars on alarms, flood lights and security cameras, which was not represented in the reparation we received. I've also received no indication of any remorse or apology, which is disappointing," he said.

McMahon was ordered to pay $2735 in reparations to the victims when sentenced by Judge Ema Aitken.

The rabbit thief, who has attempted to curb his drug addiction, has now served his four months of community detention, with a nightly curfew, but is still subjected to a 15-month intensive supervision order.

McMahon insisted he released the rabbits into the wild, believing in his mind he was liberating them from their hutches or the possession of their owners.

But the court also heard he struggles to remember exactly what happened because he cannot determine "what was real and what was not".

In a victim impact statement to the Auckland District Court for McMahon's sentencing, Lawrence described the thefts as "heartbreaking, scary, stressful and expensive".

"My rabbits were a part of my life and family - they would sit on my lap when I watched TV and would get attention day and night.

"I was devastated when they were taken and to this day feel sickened at the thought ... it is not a natural thing to have happen."

After installing security cameras, Lawrence said he would return from work and pour over the footage for hours to check no one had tried to bypass the sensors.

"To this day my parents who live at the property continue to feel unsafe and rely on extra security measures. My mother still wakes up at the slightest noise," he said.

"I know in future when I am ready for pets again, no matter where I live, I will always feel an unnatural, uneasy and over-bearing sense of insecurity that will cost me financially and emotionally, because this is not something I can forget."