The man accused of killing a young dad in a horrific central Auckland crash has been found guilty.

The defendant did not see the victim, Daniel Kopa, until it was too late to take effective action, Butler said.

"Mr Kopa did not see the defendant's vehicle and jogged into its path."

A reasonable and prudent driver would have had time to see Mr Kopa, he said.

"I find the charge proved."

The judge has not entered a conviction at this time.

"Mr Singh you will initially be worried by what I have found in the case."

But he would not be sentencing him to prison, he said.

Remanded at large until August 23, when Singh would be sentenced.

Singh's trial began on Tuesday, after he earlier pleaded not guilty to operating a vehicle carelessly causing death.

Police prosecutor sergeant Phil Mann said Kopa was there to be seen when he was hit by Singh's Toyota Prius on June 6, two years ago.

Kopa, a father of four, had just broken into a jog across Hobson St shortly before 9am.

CCTV footage showed Kopa had nearly finished crossing all four lanes of the wide one-way street when he was struck by the car, just short of the footpath.

His widow Calli Cleland left the courtroom shortly before the video of the fatal crash was played during trial.

Evidence given to the court from doctor James Black showed Kopa had a severe tramuatic brain injury during the crash.

Called as an expert for the defence, forensic engineer Dr Tim Stevenson concluded that the primary cause of the collision was Kopa's decision to cross the road. 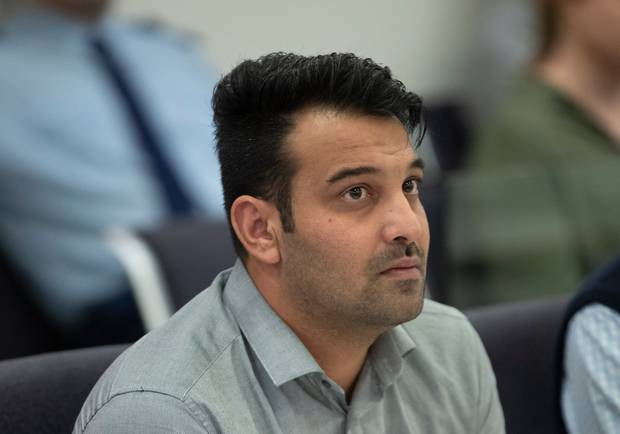 Daljinder Singh during his trial at the Auckland District Court on Tuesday. Photo / Phibbs Visuals

Before Kopa died he had a tattoo in dedication of his children completed while in hospital as a last wish.

Auckland Mayor Phil Goff, a friend of Kopa and Cleland, published a tribute to him after his death.

"I had a chance to say my goodbyes to Dann on Wednesday at the hospital. It is absolutely heartbreaking for Calli to lose the love of her life and for four little girls to grow up without their dad," Goff said.