Police armed with rifles, handguns, chainsaws and tear gas have resolved a reported shooting in Auckland's Flat Bush this morning.

A resident told the Herald he had been informed a shooting had taken place during the incident at Bezar Pl. It is unclear whether anyone was injured.

Another man living at the end of Bezar Pl said he had heard one gunshot but didn't know if anyone was hurt.

He told the Herald he awoke around 1.30am to hear a name being called over and over again by a negotiator, getting louder and louder.

"There was a police officer behind the cars calling the guy to come out," he said.

"AOS took over about 2am - they had a variety of tools including rifles, handguns and chainsaws. They were trying to get the guy out. They used ladders to reach the second floor and prised open a window," he said.

"It was very stealthy." Police have resolved the incident in Flat Bush and are examining the scene. Photo / Alex Burton

About eight police were on the ground while four climbed in the window.

The Armed Offenders Squad were up the ladder communicating by hand signals with those on the ground.

Negotiators had been calling along the lines of "Come out of the house, we're here to help"; "come out of the house with your hands on your head"; "lay down", "We won't be going away, we will be coming into the house" but they did not want to hurt him.

"It was a tense moment as you saw things unfold, there were moments when you thought something was potentially going to happen, fatally" he said.

The resident, who watched the incident unfold through a window, estimated they called his name 100 times. During the negotiation the resident thought he heard a faint voice replying once or twice.

The gunshot he heard was early while things were unfolding - before AOS arrived. The gunshot had come from inside the house, not from police, he said.

About 4am, he saw five people including a young child climb out the window and down the ladder. They were taken to the end of the street to safety.

It appeared the police on the ground were distracting the man while the people got out.

Those who came out of the house appeared subdued but one woman looked quite distraught.

About 4.30am - after the people had come out - a police officer came and told him to shut the windows as they were looking at using tear gas.

"About an hour ago a man came out of the house with hands on head. He lay down on the street and was taken away," he said about 9am.

"He was a big guy," he said, but the man was not resisting. 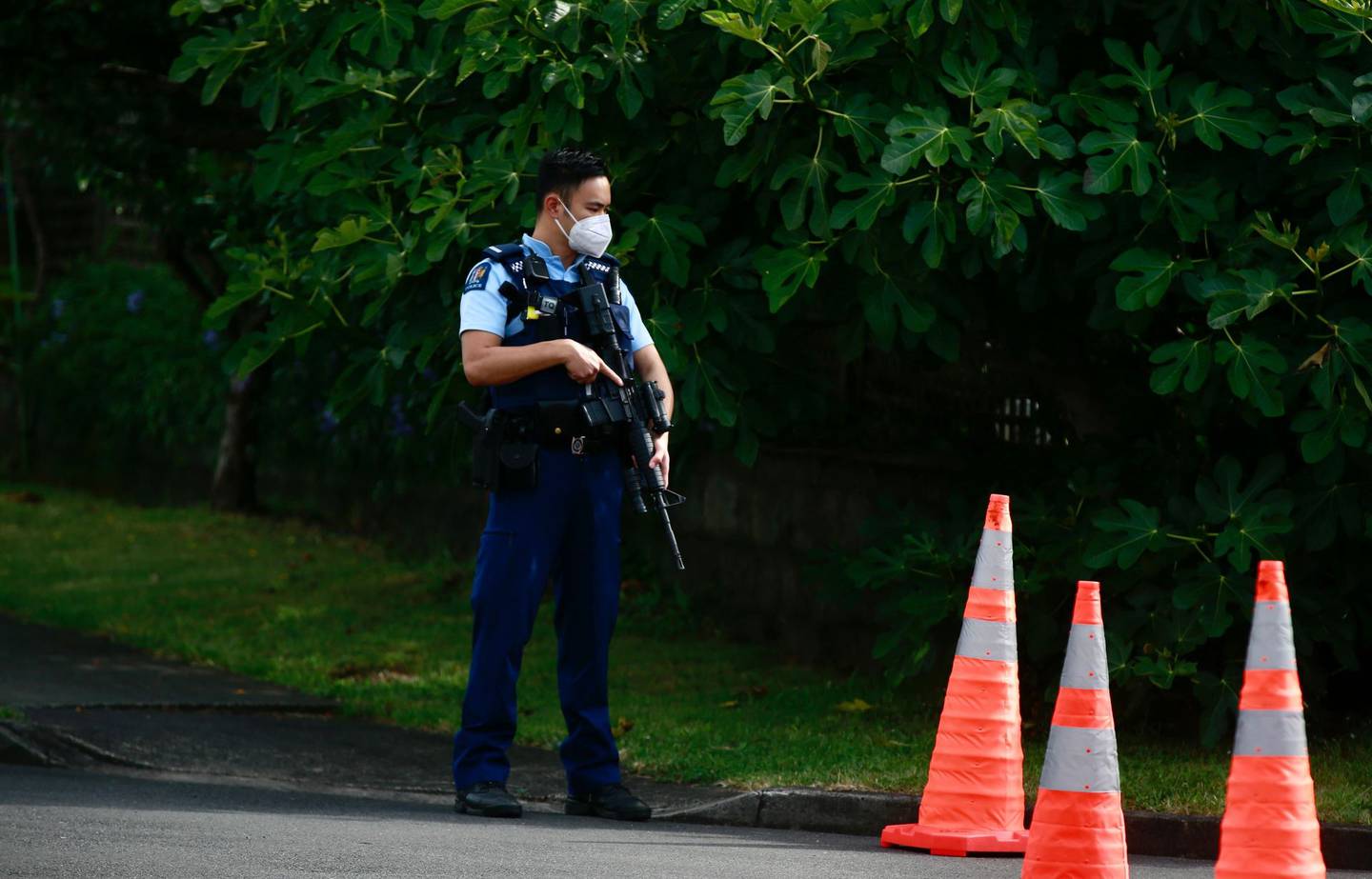 The person was quite subdued when he came out with his hands on head. He followed instructions and lay down - one person stood over him while the other handcuffed him.

The resident commented on how such incidents could occur anywhere in Auckland.

"It's generally a quiet neighbourhood but as we've seen throughout Auckland it's obviously changing. It could be anywhere at any time that this could happen."

He was full of praise for the police and how they handled the incident.

At 8.40am, police confirmed the matter had been resolved but said officers would remain in the area. 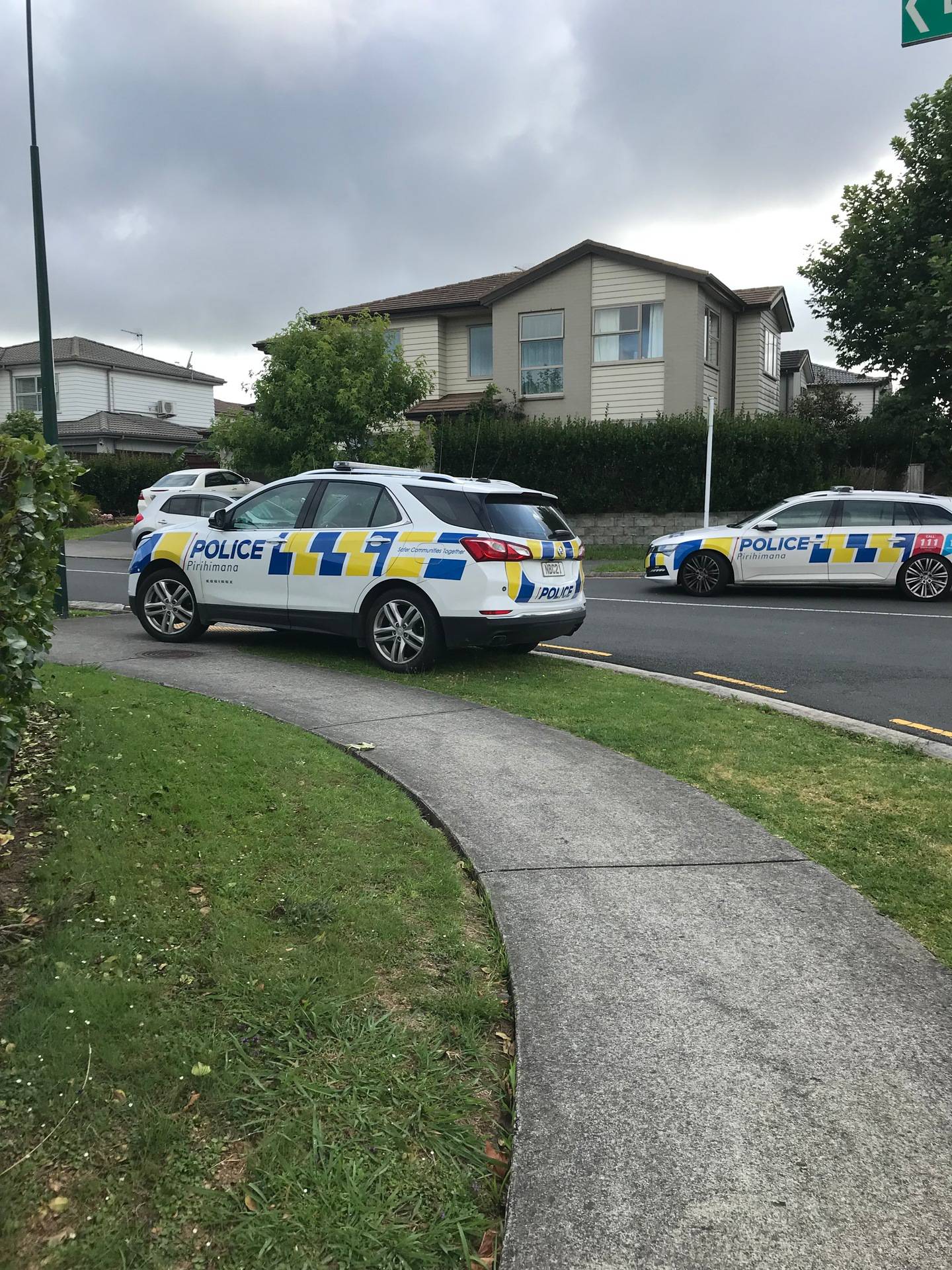 There had been about 40-50 officers on the scene at one point, including Armed Offenders Squad members. Photo / Dubby Henry

Another resident said Stamcombe Rd was initially cordoned off but it has now been lifted. A cordon remains in place at Lorenzo Way.

Police told the man a property was being cleared and the cordon should be lifted by 10am.

The Armed Offenders Squad reportedly left the area about 8.30am.

Police would not confirm whether a person had been shot during the incident.

A family member who appeared connected to the incident had left the scene. A man had been comforting a woman from the car.

Residents are beginning to leave their houses.

Earlier, there were reportedly 40-50 police officers including Armed Offenders Squad in the area.

A spokeswoman said the incident on Bezar Pl had "been ongoing overnight".

Bezar Place is a cul-de-sac with just 10 houses on it.

A local resident told the Herald the Armed Offenders Squad was attending and there had been a heavy police presence in the area since 3am.

The resident lives nearby and normally goes for a walk around 4.30am. But when he left his house this morning was told to go back inside.

He estimated there were 40-50 police involved and several ambulances were at the scene.

One officer had told him it was a major operation and they could be there the entire day.

He had seen a person sitting in their car, who had been "exhaustively" interviewed by two to three police for around 40 minutes.

"The lady went out in the park when it wasn't dark and then came back and the guy also went out to stroll around the park and came back."

He was earlier concerned there was little detail provided to the neighbours about what had happened.

"When they see a heavy police presence a lot of people get scared and feel unsafe. It may be sensible - they don't have to provide the precise details of the operation but ... they could tell people they don't have to worry, they can feel safe."