Police are trawling through hours and hours of security camera footage to piece together the circumstances which led to a fatal shooting in Auckland on Monday. Detectives are looking for a dark-coloured Mazda vehicle involved in an "altercation" with people in another car. Shots were fired and a man - whom the Herald can reveal was a Bay of Plenty gang member - was fatally wounded.

The victim of a fatal shooting in Auckland was a member of the Mongrel Mob gang in the eastern Bay of Plenty.

The man was found dead on a street near the Auckland City Hospital on Monday after police responded to reports of screaming and gunshots in the nearby suburb of St Johns.

A homicide inquiry is under way but no arrests have been made.

Detectives are trawling through CCTV footage and want to hear from anyone who might have seen a dark-coloured Mazda in St Johns and Glen Innes between 5.30am and 6.30am on Monday.

In a previous statement, Detective Inspector Lloyd Schmid said the victim was in the Mazda, with three other men, which stopped to meet another vehicle on St Johns Rd.

An altercation took place and shots were fired, with the Mazda then driven towards the hospital to seek medical assistance for the victim - although he died on the way.

The body was removed from the back seat of the car on Parkfield Terrace and the driver called 111 for help.

The Herald can reveal the victim is Clifford Umuhuri, in his late 40s, who was a member of the Mongrel Mob chapter in Taneatua known as "Big Red", in the eastern Bay of Plenty. 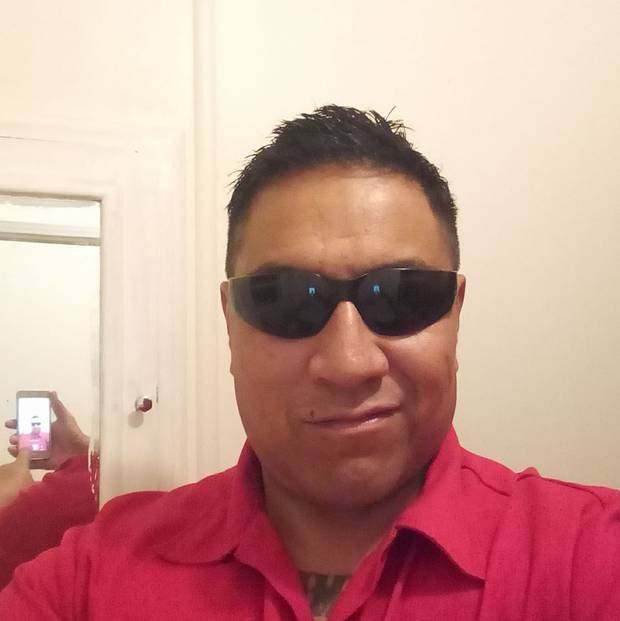 The victim of a fatal shooting in Auckland was Clifford Umuhuri, a member of the Mongrel Mob in Taneatua. (Photo / Supplied)

The police investigation is still trying to piece together the events which led to Umuhuri's death, but are believed to be working on the theory of a drug deal gone wrong.

Schmid has previously said the occupants of the Mazda are speaking with the police and the individuals involved know each other.

"While this may have been concerning for residents in these areas, police are working hard to hold those involved to account," said Schmid.

"Police believe there will be people in the community who will have information which would assist the investigation and we urge them to contact us." On the day of the shooting, one witness told the Herald they heard the screams and gunshots.

Another said CCTV cameras from his business filmed two people dragging the body of a man from the back seat of a car.

A man who lives on Truman St in St Johns said he heard two gunshots and screaming about 6am.

"I heard a couple of shots ... and shouting and screaming - a man and a woman," he said, noting he distinctly remembered the time as the commotion woke him and his partner up.

The neighbour said the area was usually generally quiet otherwise.

A vehicle fled the address, said a spokesperson for the police, before stopping on Parkfield Terrace, a residential street in Grafton near the Auckland City Hospital.

The body of a man was seen there, covered with a sheet, around 7am. 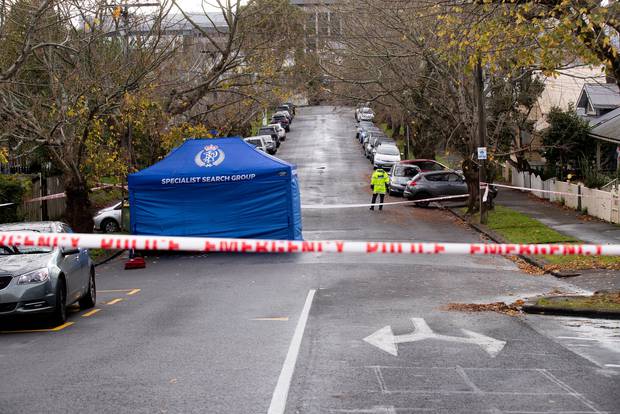 A police tent covers the scene where the body was found dumped on a residential street in Grafton. (Photo / Dean Purcell)

Two people dragged the deceased man from the back seat of a car on to the street, according to the owner of a nearby business.

The shop owner, who did not want to be named, said one the two people he saw on security camera footage could be seen pacing up and down the street between 6.30am and about 6.43am, immediately outside Parkfield Terrace and the main road on Khyber Pass Rd.

"A guy was on the phone for at least 10 to 15 minutes. He was just talking on the phone," said the shop owner.

"He looked calm. He was looking up and down the road."

It was as if the man was waiting for the police, said the business owner, and officers arrived shortly afterwards.

"They had plenty of time to run away.

"It's very scary and [I'm] sad, of course, and I'm worried. It's usually really busy, even at that time on a normal day. It's a peaceful street."