Former politicians, councillors and abuse survivors are among speakers at a Waikato Mongrel Mob workshop in Hamilton on Saturday. Jared Savage reports

Sonny Fatupaito knows the media as well as any politician.

"And when he said he wouldn't come, I knew [the media] would." 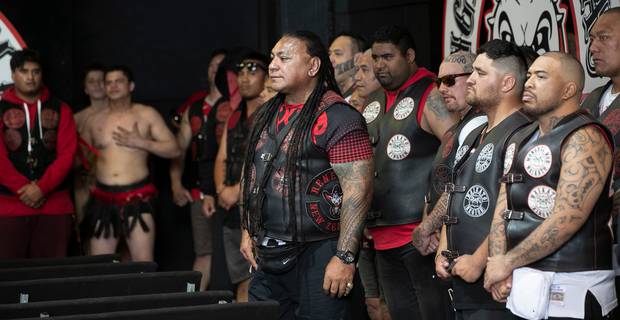 President of the Waikato Mongrel Mob Kingdom Chapter Sonny Fatupaito keeps an eye on things as guests are welcomed into the gangs headquaters for a hui in Hamilton. Photo / Alan Gibson

He chuckled as he told this anecdote while inviting the Herald on Sunday to attend the gang's Mana Whānau day today.

And we did. Reporters and camera operators from all the major newsrooms mixing and mingling with patched gang members, wives and girlfriends, toddlers and teenagers.

Bottles of water were handed to those waiting outside in the Hamilton sun, before a rousing haka and pōwhiri welcomed visitors inside the gang's headquarters – which doubles as a dojo for martial arts training.

Once seated at the pews inside, on loan from the local Destiny Church, there was almost a religious reverence from those who gathered to hear from their "Bulldog". 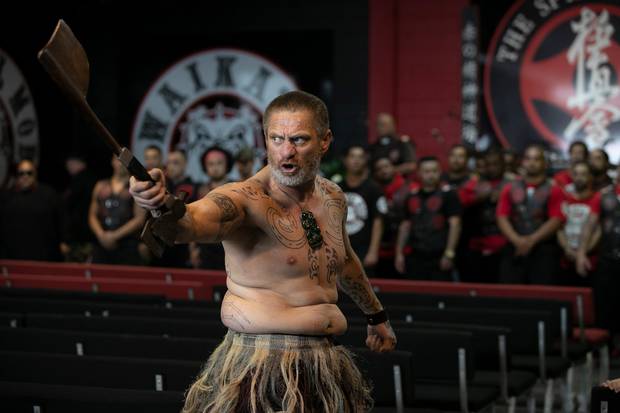 A member of the Waikato Mongrel Mob lays down the challenge as guests are welcomed into the gang's headquaters for a hui in Hamilton. New Zealand Herald photograph/Alan Gibson

Powerfully built and softly spoken, Fatupaito thanked those who "heeded the call" – the call against domestic violence, child abuse, suicide, addiction to drugs and alcohol.

"When there's violence in the home, the eldest child often takes over caring for their siblings. These children now have adult problems. They start thinking thoughts they shouldn't have to think, suicidal thoughts," Fatupaito said.

"I'm tired of putting a hand of dirt on top of a box."

A Mongrel Mob member for 33 years, Fatupaito explained his chapter had walked away from the gang's national council two years ago to forge a new kaupapa (founding values).

There's no doubt such a move would have created tension within the internal machinations of the gang.

This new kaupapa, says Fatupaito, is one of empowerment.

Sir Pita Sharples and Dame Tariana Turia – the founding co-leaders of the Māori Party – and Merepeka Raukawa-Tait, former chief executive of Women's Refuge were the headline speakers, as champions of social change over many years.

The trio of respected leaders needed no introduction, but there were other speakers sitting in the front row whose life had been thrust into the national spotlight through no fault of their own.

"There are some women going to share their stories and it's going to resonate with many of you," Fatupaito said.

"Because they've been in some dark places."

One was Zania McCauley, born and raised in Te Teko. 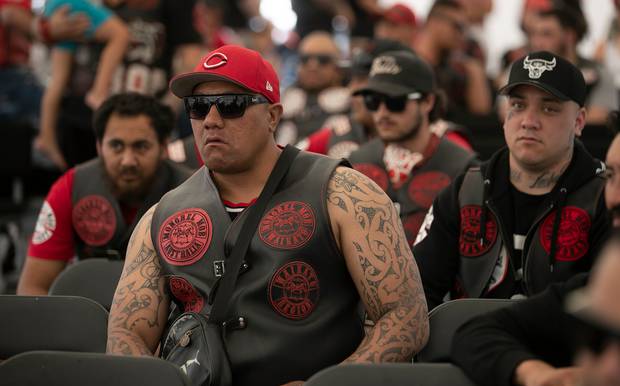 "Shit I'm nervous ... I had an awesome upbringing," was McCauley's opening line, before trailing off into a long silence.

The drone of a fan vainly trying to force a breeze through the stifling heat was the only sound to be heard.

"I made a mistake. And a one-night stand turned into a 16-year nightmare."

Just 22 at the time, McCauley felt trapped in a relationship with John Chase, the president of the Te Teko Mongrel Mob.

"He was totally absorbed with himself. Satisfy his own needs, his own wants, no regard for any other person," said McCauley.

"He would intimidate people, use and abuse his power within the Mob."

Years of psychological, physical and sexual abuse followed, from which McCauley could not extricate herself.

"I was dragged behind cars, beaten constantly, raped, tortured. I was belittled... I lost the will to live."

Another long silence followed. This time McCauley was joined on stage by her son, tall and strong, wearing a Mongrel Mob patch. He put his arm around her, as she kept telling her story.

"I couldn't understand how one person could take ownership of someone like he did."

Chase tattooed his initials on the back of her neck, made her wear her hair in a bun "so everyone could see I was his property".

Five times she tried to kill herself.

It wasn't until McCauley's eldest son, then just a teenager, promised to leave the house when he was 18 with his younger siblings that she gathered the strength to stand up to Chase.

Two years ago, Chase was convicted of 28 violence and sexual abuse charges, including rape, and jailed for 18 and a half years.

McCauley chose to waive her automatic name suppression to tell her story in an interview with The Hui television show a few months ago.

The decision to speak out came at a cost.

She and her new partner were "randomly" attacked by two Mongrel Mobsters. Her partner suffered such serious facial injuries that he could not attend yesterday.

McCauley was at pains to note the violence she suffered over 16 years was not the fault of the Mongrel Mob, but the cruelty of one person.

"He decided to do that to me."

McCauley embraced her son again, then sat down to sustained applause.

Politicians - and many of the public - would be sceptical of the gang's open day as a PR exercise, but those who accepted the Mongrel Mob invitation heard hard truths about New Zealand.