A father who deliberately drove off the road at 130km/h, killing his 6-year-old son in a fiery car crash, has today been jailed for five years.

An emotional sentencing hearing at the High Court in Christchurch this morning heard from Lachlan Gebhardt's heartbroken mother Kim Manson who called her ex-partner Niklas Gebhardt a "coward" and a "monster".

Manson said her "beautiful, sweet son" - who she called her best friend - was killed in a "planned and calculated" act.

While she knows Gebhardt – who claims he has amnesia and cannot remember why he drove off the road - was convicted on a charge of manslaughter, she said it will always be murder to her.

And she will always question why he took her son.

"Why not just do it yourself, why did you have to take my sweet boy with you?" Manson said. 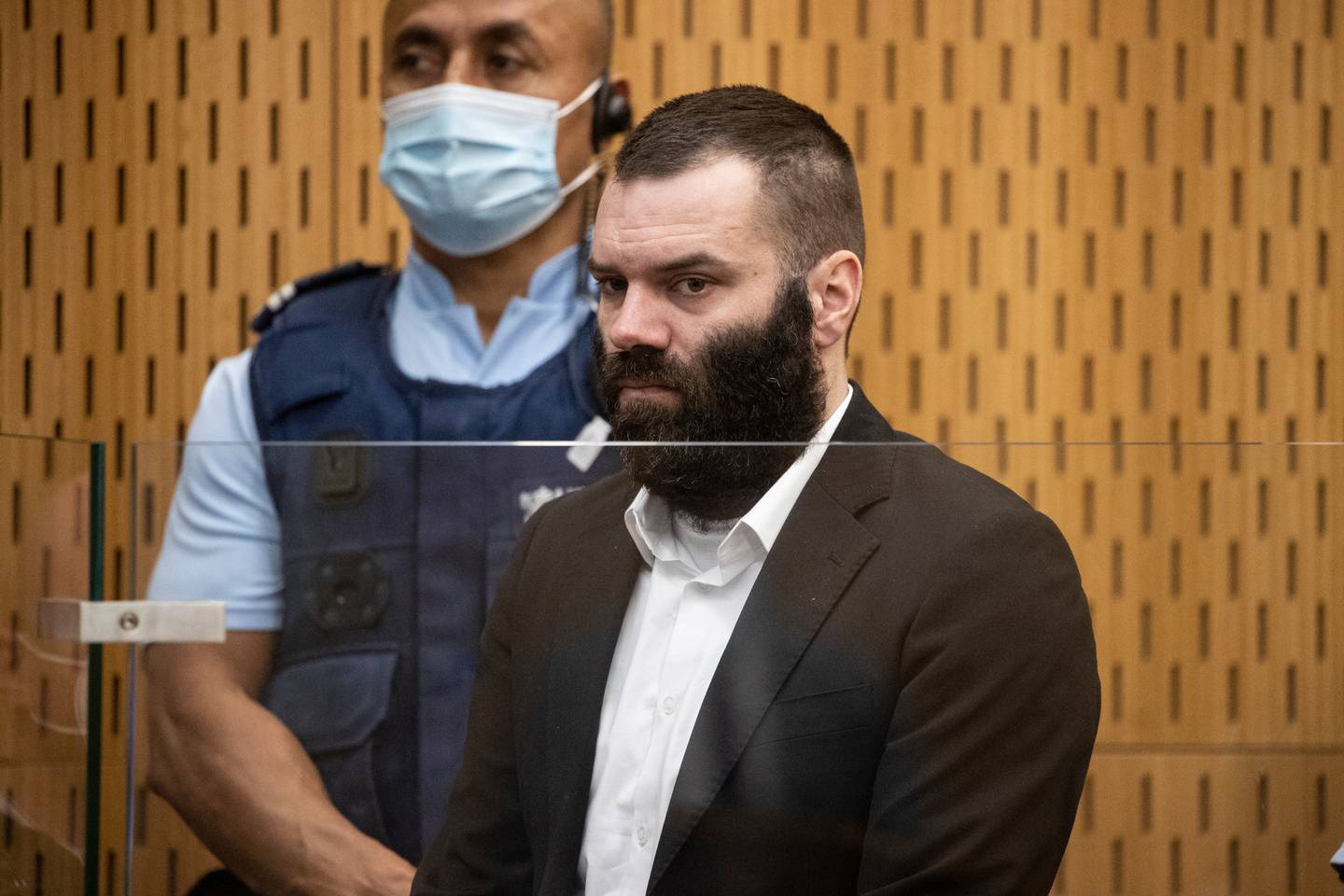 Former footballer Gebhardt, 32, stood with his head bowed in the dock as Justice Jan-Marie Doogue sentenced him to five years in prison. He earlier pleaded guilty to a manslaughter charge.

Although defence counsel Andrew McCormick acknowledged an "absolute tragedy" which has "affected many, many people", he stressed that it was not murder.

"This is not a murder case. He has not pleaded guilty to murder," he said.

Justice Doogue, however, found he was "deliberately engaging in highly-dangerous and reckless driving".

"This was a deliberate crash at very high speed," the judge said, telling Gebhardt that he breached the precious trust his young son would've had in him.

"Lachlan should've expected to be safe in the hands of his father.

"He was completely at the mercy of your decision-making that day."

The judge heard that Gebhardt currently lacks insight into his offending and has not taken responsibility for it.

Gebhardt has amnesia from the period of time he drove off the road, McCormick said, and cannot remember why he did so. He's now a broken man, he said, suffering from diagnosed "complicated grief". Lachlan Gebhardt, 6, died after the car he was in failed to take the bend at Lehmans Rd and River Rd near Rangiora in November 2019 and launched over a river stopbank. Photo / Kurt Bayer

The court heard that Gebhardt drove off the road at high speed through the bend of Lehmans Rd and River Rd near Rangiora Racecourse, North Canterbury, on November 5, 2019.

The car launched 24m in the air before it hit a tree 7m higher than its take-off point.

It burst into flames and Lachlan died at the scene.

There were no signs Gebhardt tried to brake or slow down, the court heard today. 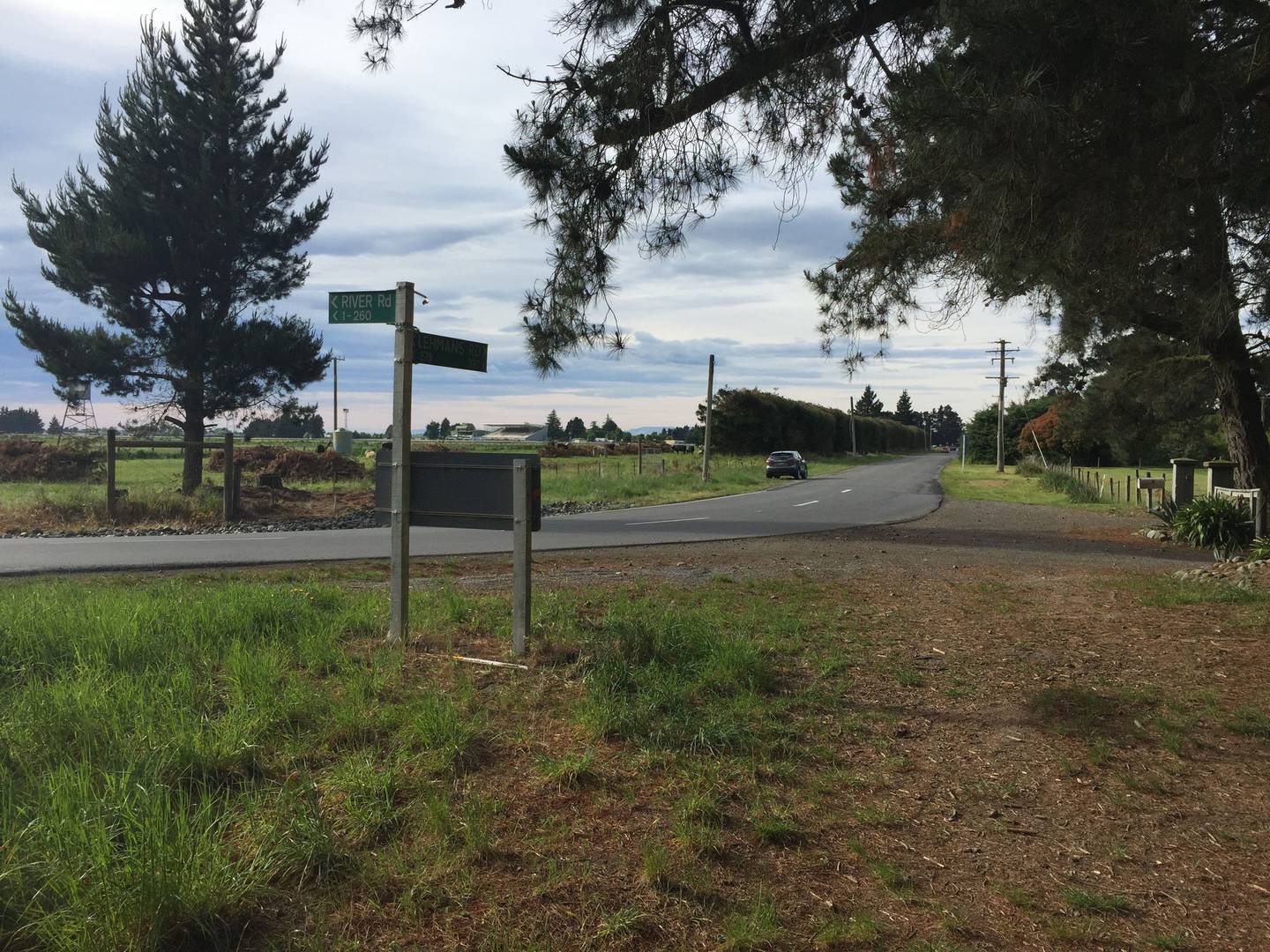 Police say Gebhardt was doing about 130km/h when he went straight ahead at the bend. Photo / Kurt Bayer

As members of the public dragged Gebhardt out of the burning wreck, he asked to be put back in to change places with his son.

"He's such a nice boy. I want to swap with him," Gebhardt told them. "I want a bullet."

It was a "very sad case", Zarifeh said, and one that defies explanation or description.

"There are really no words that can capture the loss caused by Lachlan's death," he said.

On November 5, 2019, Gebhardt arranged with Lachlan's mother to pick him up from Dudley Swimming pool in Rangiora.

He took over from Lachlan's grandmother at the pool and they left at 4.08pm, with Lachlan sitting in the back seat of his Mazda car.

Gebhardt drove at speed along Lehmans Rd on the westerly outskirts of Rangiora, faster than the posted 80km/h limit. He swerved sharply when he passed a vehicle and had to get back to avoid an oncoming vehicle.

At the end of the straight, there was a sharp right-hand corner with a posted 25km/h speed advisory. 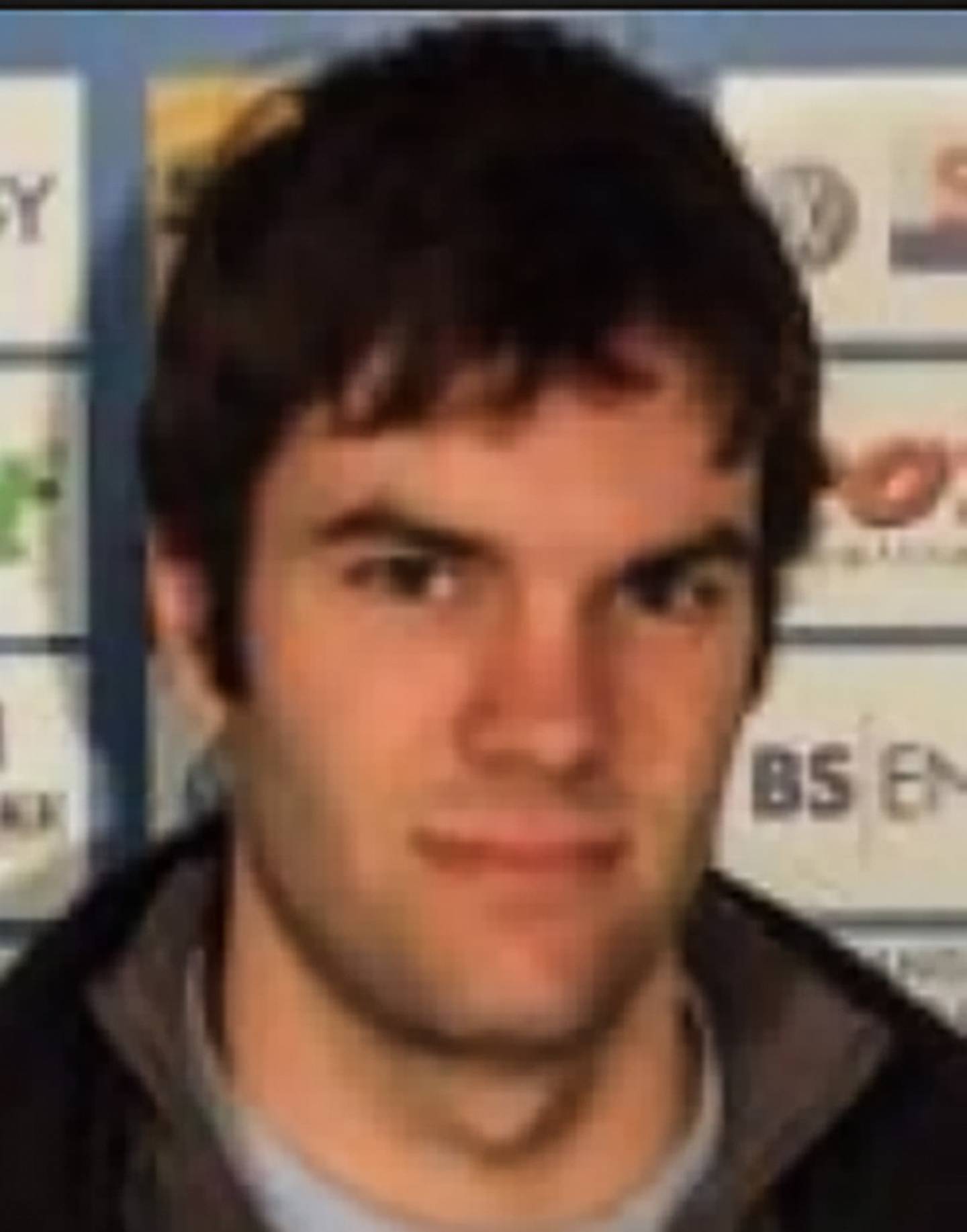 Niklas Gebhardt admitted causing the crash that claimed the life of his 6-year-old son. Photo / Supplied

Police estimated his speed at about 130km/h when he reached the turn, but he made no effort to brake, slow, or swerve.

The car hit the speed sign, went up a stop-bank and became airborne for 24m before it hit a tree 7m higher than its take-off point.

The car spun to the ground and caught fire.

Members of the public called for emergency services and then pulled open the passenger door and dragged Gebhardt out.

The fire prevented them from getting back to the car.

Gebhardt told them he wanted them to put him back in the car because he wanted to swap places with his son. He said his son was "such a nice boy".

Gebhardt said he "wanted a bullet".

Gebhardt received burns to 30 per cent of his body, a fractured femur, and facial injuries. Lachlan died at the scene.

When he was interviewed by the police about seven weeks later, Gebhardt said he could not recall anything about the crash.

In September 2020, 10 months after the fatal crash, he walked into the Christchurch Police Station, took his clothes off and pleaded to be jailed.

He was arrested and charged with obscene exposure in public. 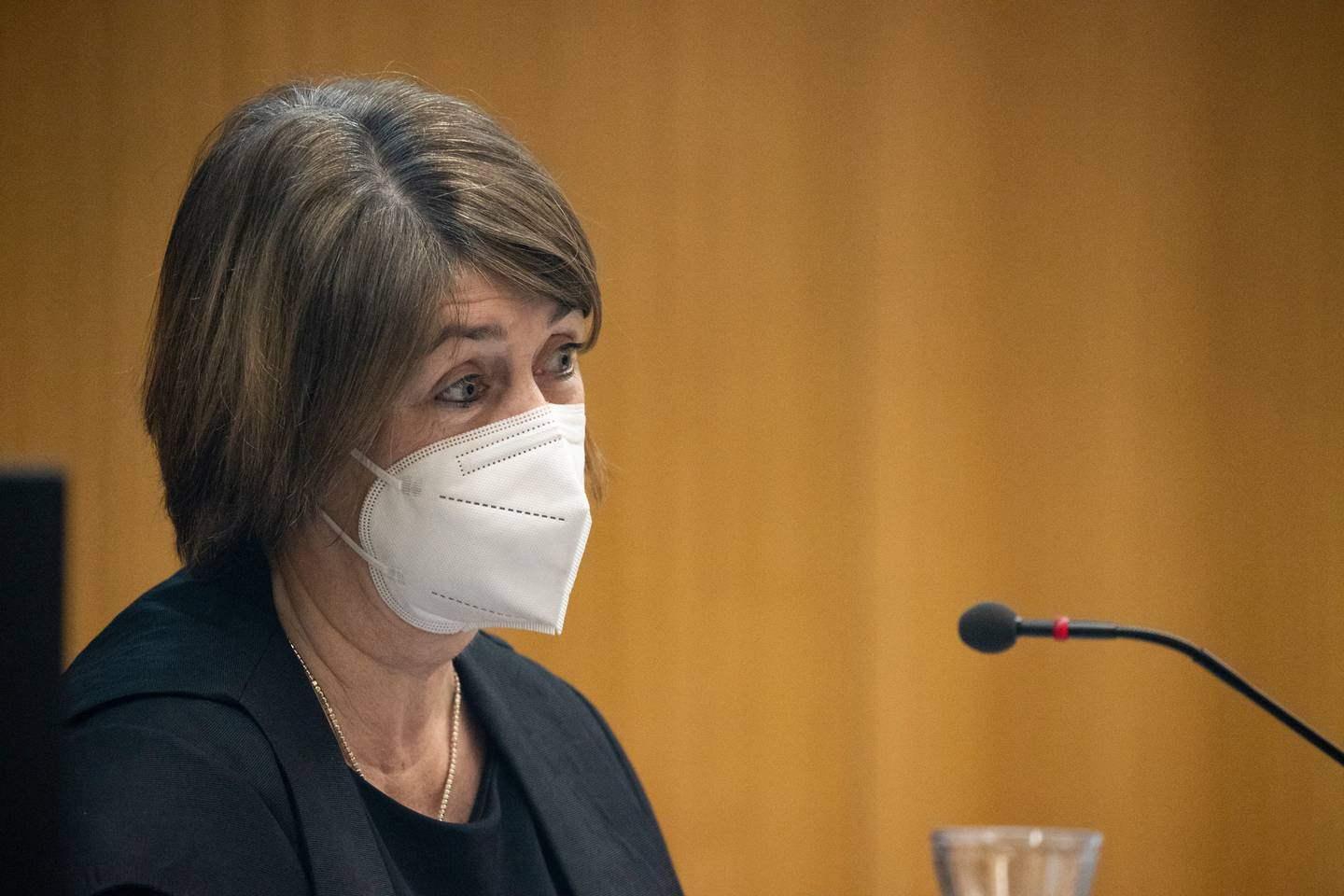 At a court appearance soon after, McCormick explained that Gebhardt was "having difficulty" with trauma issues.

However, Gebhardt insisted on pleading guilty immediately, and was jailed for a month for the obscene exposure offence.

The crash was across the road from Manson's work at the racecourse and around the corner from where she lived with Lachlan.

She believes Gebhardt wanted to cause "maximum pain" and would never forgive him.

In the days after the crash, the family were led to believe it had been a tragic accident, Lachlan's grandmother told the court today.

But after visiting the scene, she did not believe it was an accident.

"I believe you murdered my grandson," she said in her victim impact statement today.

"You used your car as a weapon."

The distraught grandmother said Lachlan's death has left a "yawning chasm" in their lives.

She is disgusted and appalled by Gebhardt's act, saying he never apologised or showed remorse, and told him today that she could never forgive him.

Lachlan was the "best grandson anyone could want" who knew right from wrong.

She said Gebhardt "took his life and stole his future".

"I don't know how anyone could be so cruel."

It was "deliberate driving conduct" that day by Gebhardt, Zarifeh told the court. There was no other explanation, he said.

In this case – unlike many others – Gebhardt was an unimpaired driver, Zarifeh said.

There were no external or psychological explanations for the crash, he said, referring to a report that found Gebhardt was not suffering from any type of mental health issues at the time of the crash.

And there was no suggestion it was an accident, the Crown says, with no evidence he'd tried to brake or slow down before the crash, on a piece of road he knew well.

"Any sentence I impose, irrespective of its nature and length, will not address the victims' loss," she said, adding that no mother should have to attend their 6-year-old son's funeral.

Gebhardt is disqualified from driving, once released from prison, for seven years.