A police officer is on trial accused of sexually violating a colleague after a night of heavy drinking while on deployment at last year's official ceremonies at Waitangi.

The policeman was arrested last March and charged with sexual violation by unlawful sexual connection and indecent assault after allegations emerged from an incident on the night of February 4 and early hours of February 5 at a Northland motel.

But he claims it was a "pre-arranged hook-up".

Today, his trial in the Auckland District Court began.

The officer has already pleaded not guilty to both charges but reaffirmed his denials after a jury was empanelled just after midday.

Crown prosecutor Fiona Culliney told the jury the defendant was part of a large contingent of police officers who had been deployed to help patrol Waitangi Day celebrations.

"This trial is about what happened between two police officers," she said.

The two cops had known each other for about a year through work. They also had communicated with each other on Snapchat, Culliney said.

Many police employees contacted each other on the social network, the prosecutor added.

After arriving in Waitangi for a briefing about the upcoming national events, the officers travelled to Kerikeri to stay the night.

They were given some downtime, but the night quickly escalated into a session of heavy drinking, the court heard.

The police officers played drinking games, there was some wrestling between some of the men, and Snapchats were taken, Culliney said.

After drinking well into the night, the defendant, another police officer and the alleged victim went for a quick swim in the motel's cold pool.

After some more alcohol was bought and consumed, the accused officer "tried to come on to her" in one of the motel units, Culliney told the jury.

He allegedly indecently assaulted her when he put his hands down her shorts, Culliney said.

The accused cop replied: "No one has to know, come on, come on."

Culliney said the alleged victim "manages to get away" but didn't tell any of the other police officers at the motel.

"[She] put it down to boys will be boys," Culliney said. "She didn't want to cause a scene, she thought that would be the end of it.

"If nothing further had happened after this, members of the jury, I doubt any of us would be here today."

Shortly afterwards several drunk police officers went to the Kerikeri McDonald's and attempted to walk down the drive thru but were turned away and returned to the motel. 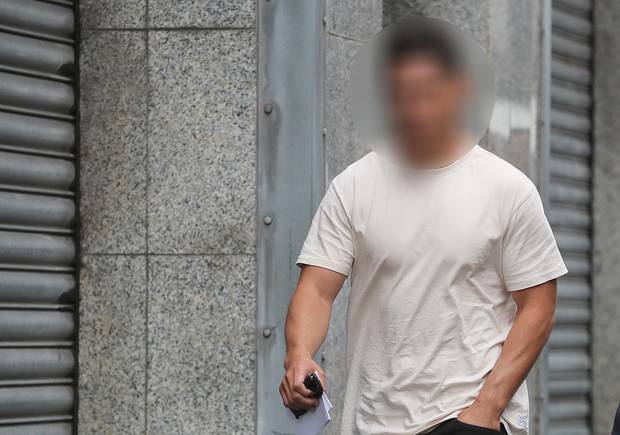 But before the complainant went to bed, the accused cop was seen standing behind police van "hovering, or creeping around".

"The complainant doesn't recall this event at all," Culliney said.

"Perhaps unsurprising, she had consumed 10 beers and been up for 21 hours."

After retiring for the night, the woman was unaware that at 2.34am the accused officer made his way across the courtyard towards her unit.

"He inched the ranch slider door open and went inside," Culliney said. "She wakes up to a painful forced feeling."

Stirred awake, she is told by the accused policeman to be quiet, the court heard.

"She sits up and slides up the bed, panicking," Culliney said.

The accused officer, "having just raped her" Culliney told the jury, was saying "don't do this to me, what do you want me to do about it?"

The complainant, however, reached for her phone and began recording a video. While it was dark, a one minute and 50 second interaction was recorded and played to the jury today.

"Don't even give me that sh*t," the complainant can be heard saying.

"What shit?" the accused officer said.

"I've denied you earlier, and I've woken up to you f**king me," she said crying.

"What do you want me to do?" the accused officer said.

Culliney said the defendant was panicking.

At 12.53am he had also sent the female officer a Snapchat, but it was never opened.

Before she had a chance to he deleted the app and deleted her as a friend.

"We don't know what was in that Snapchat, but it's clearly been deleted," Culliney said.

The accused cop, the court heard, was also asked by another officer, "you been fishing?"

"Yeah, but all I got was some seaweed and a gumboot," the defendant allegedly replied.

Culliney said this was the defendant describing in slang that "I tried it on but I failed".

However, the accused officer's lawyer, Paul Borich QC, said the defence in this case "is a very simple one".

All and any sexual contact was consensual, he told the jury in a brief opening statement.

"It was a pre-arranged hook-up."

An application to continue the cop's interim name suppression was declined by Judge Evangelos Thomas yesterday. However, Borich has appealed the decision and evoked a statutory suppression order until the challenge could be determined.

Further details about the case have also been suppressed to protect the identity of the complainant.

The accused officer has been stood down from the police and a separate employment investigation will be conducted, Auckland's Detective Superintendent Dave Lynch has said.