Catching waves seem to be more important than staying home for surfers who continue to defy lockdown rules.

Police are now staffing some beaches to stop people from surfing or swimming.

A photograph of a police officer at a beach in Gisborne, waves crashing behind him, was posted by Kiwi surfer and four-time national surfing champion, Maz Quinn, with a caption describing his disbelief.

"Would never ever thought it would come to this. Unbelievable, really," he wrote on his Instagram page.

On the east coast of the Coromandel Peninsula, about 20 surfers reportedly turned up early this morning at Hot Water Beach.

A local man sent the Herald a photo showing people surfing and swimming just before 9am. 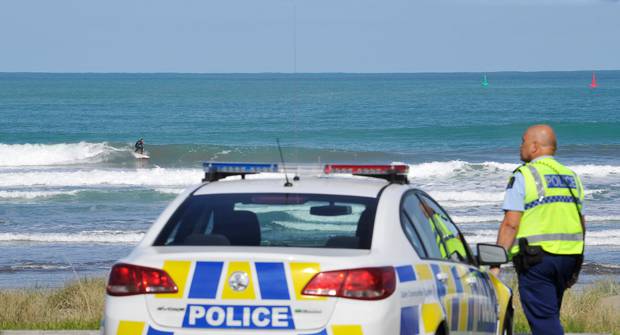 Local man says he is frustrated at rule-breakers

"I'm just frustrated at the bulls*** that's going on here at Hot Water Beach," he said.

"You've got the rest of New Zealand who is under lockdown and then you have Hot Water Beach - which has it's own rules."

The resident, who asked not to be named, said there had been people surfing at the site every day since the lockdown started two weeks ago.

He said this morning's crowd had people from as far as Whitianga, about 35km away.

That is a drive of about half an hour and goes against the alert 4 lockdown ban on not driving out of your local area.

"I've been calling people out and they don't like it. Hot Water Beach is one of the nicest beaches in New Zealand and the world and it should be leading by example.

"But we're setting a bad example," he said.

"We're fighting Covid-19 and the rest of the world is praising us - and here, they're breaking the rules."

Police were called to Auckland's west coast after people were spotted surfing at Piha Beach over the weekend.

Officers spoke to people at the beach and a disgruntled man in a wetsuit gave a fingered salute to media.

The Ministry of Health has already issued a number of health notices clarifying the lockdown rules around recreational activities at beaches, in particular, after earlier saying swimming, for example, was discouraged.

All water-related activities - including swimming, surfing, fishing and boating - are now completely banned under alert level 4.

Earlier this week, police revealed that nearly 300 people had been caught flouting lockdown rules since it began just over two weeks ago.

Most people were sent home with a warning, authorities said.

Others, however, received more than a warning - with a total of 16 people now facing prosecution for not adhering to the lockdown rules.