A man who was held down by four police officers during an arrest on an Auckland street has been left with facial injuries and a damaged sternum, with bystanders claiming brutality.

The man, 26-year-old Whangārei man Nikau Andrews, says the way police treated him was "racist" and that he believes he could have been killed.

The arrest was filmed by bystanders and posted to social media yesterday.

Andrews was being arrested for tagging his name on a wall in Hopetoun St between about midnight and 12.30am in the early hours of Sunday morning, and has been charged with wilful damage (graffiti) and resisting police. He is due to appear in court on July 10. 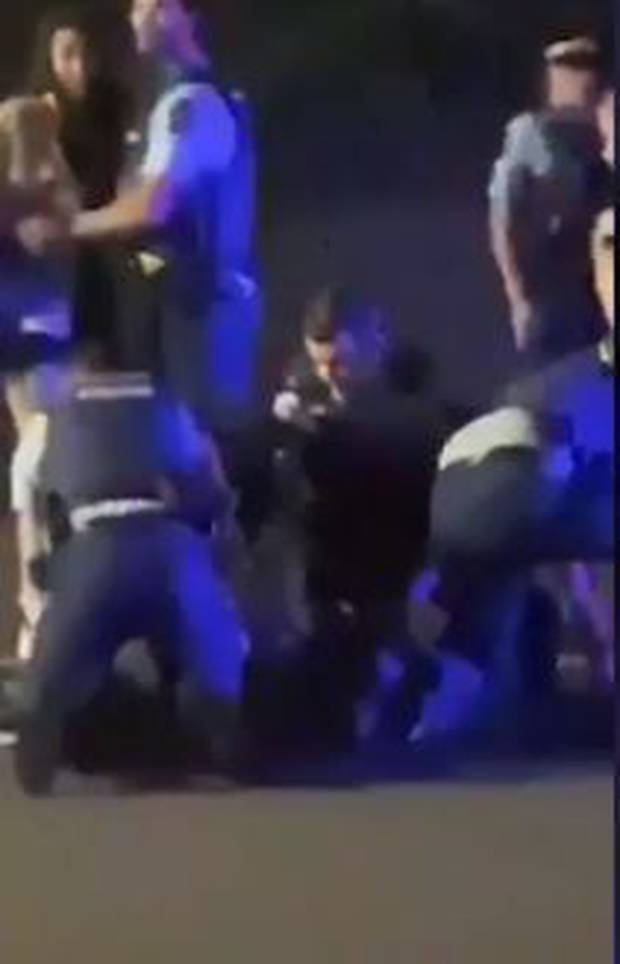 The arrest was filmed by bystanders and posted on social media.

Police insist they followed correct procedure and stress that the video on social media did not capture the full incident.

"Based on the information I have to hand, I am confident police acted in an appropriate and professional manner in a volatile and dynamic situation, and upon becoming aware, prioritised the man's medical treatment over keeping him in custody," said Auckland District Commander Superintendent Karyn Malthus.

The video shows four police officers holding Andrews down on the side of the road, with one officer holding his arm across him and blood apparently obvious on the officer's arm.
A second video shows a crowd of onlookers being moved back by police and asking police to let the man go.

"Please get off him, he's f***ing hurt!" a bystander can be heard yelling.

Andrews told the Herald from the emergency department at Auckland City Hospital that he and a group of friends were walking to a friend's birthday party and he stopped to tag his name on a wall with a spray can. He described himself as a graffiti artist who makes screen prints and tee-shirts. 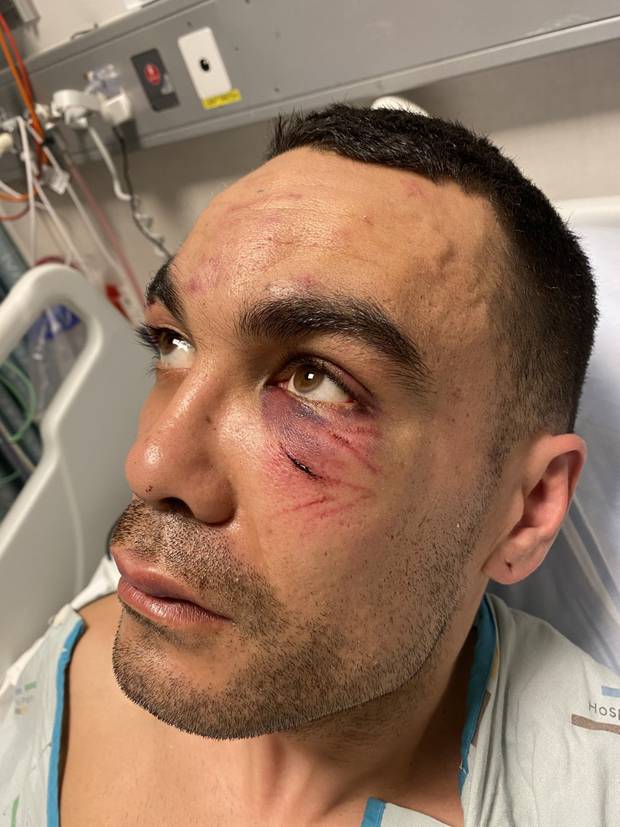 Graffiti artist Nikau Andrews is in Auckland Hospital after being held down by police on an Auckland street where he was caught tagging his name on a wall. Photo / Supplied

Police happened to drive past while he was tagging.

"Several cops got out and just dealt to me. They didn't read my rights or anything. I was pushed to the ground and dragged around and kneed in the head," he said.

Andrews now has a black eye and scratches on his face just below the eye which he believes came from an officer kneeing him.

"I've been having a look at the footage and it's most likely getting kneed in the head. At the very start of that first video, you see an officer go from being on the ground to get up and thrust his knee straight into my head," he said.

Andrews also has injuries on the side of his head, across his back and on one arm which he believes come from "getting pushed around on the ground".

He has also been told that he has ruptured his sternum and has "an air bubble around my heart".

"It's shocking," he said. "I have never actually been in this state in my life."

He believes it was a racist attack and that he was "profiled" just because he was a young male Māori, even though he acknowledges he was caught tagging.

"I just think they wouldn't have used that particular kind of force on anyone else. I think I was profiled just because of the way I look," he said.

"They made it pretty clear when they arrested me that they considered it a job well done. They said, 'We've got the animal.' There's no way or how that I was being an animal, I just tagged my name on the wall." Bruises on Nikau Andrews's back which he believes were caused by police pushing him around on the ground. Photo / Supplied

Andrews said police took him to the police station and charged him, and then sent him to Auckland City Hospital in an ambulance at about 1am.

He discharged himself later and returned to his friends at their hotel, but returned to hospital when he woke up at about 10am because he was finding it difficult to breathe.

"If I have a full breath and load my lung up with it, it's painful," he said.

He denied that he resisted police.

"I'm 65kg. I had four grown men on top of me. I'm only a little person, there's no way I was going to resist. I was not even fighting against them. All I said was, 'You are kneeing me in the head - why are you doing it?'" he said.

A friend, Josh Moetara, aged 29, a Whangārei hairdresser, said he also took a video of the incident.

"We were just walking up the road from the motel, doing some graffiti, and then that happened. They just happened to drive past at the right time," he said.

"I saw them just pretty much pack-attacking, punching, kneeing, applying pressure to his head.

"A couple of people started to say, I suppose because of everything that's been happening around the world, just calling the police out saying ' What are you doing?' and trying to get them to stop.

"The damage was already done. He was already on the ground and they were still going. It was totally inappropriate." 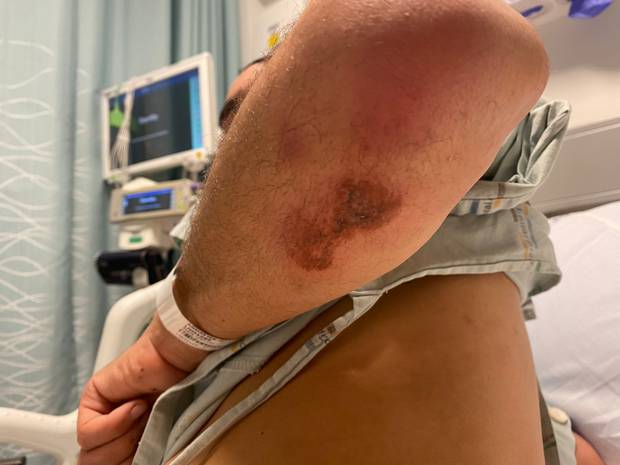 Bruises on Nikau Andrews's arm which he believes were caused by being dragged along the road by police. Photo / Supplied

'Police acted in an appropriate and professional manner'

However Police Auckland District Commander Superintendent Karyn Malthus said Andrews was arrested after he "fled police after being observed tagging a wall on Hopetoun St".

"Police chased the man on foot and quickly caught up to him," she said.

"In the course of trying to make an arrest, the man violently resisted and it took several officers to restrain him, one of whom sustained minor injuries.

"The arresting officers struggled to apply handcuffs to the resisting man, and additional officers created a protective arc in order to allow them to complete the handcuffing action.

"Once handcuffed, the man continued to resist and had to be carried to the police vehicle.

"At the station, police called an ambulance so the man could be medically assessed as he was complaining of chest pains. He was taken to hospital for treatment.

"Ultimately the man was released on summons to appear at Auckland District Court on July 10 on charges of wilful damage and resisting arrest.

"During the incident, and following several warnings, police also arrested a man from the crowd on a charge of obstruction of police. He was later released with a warning. 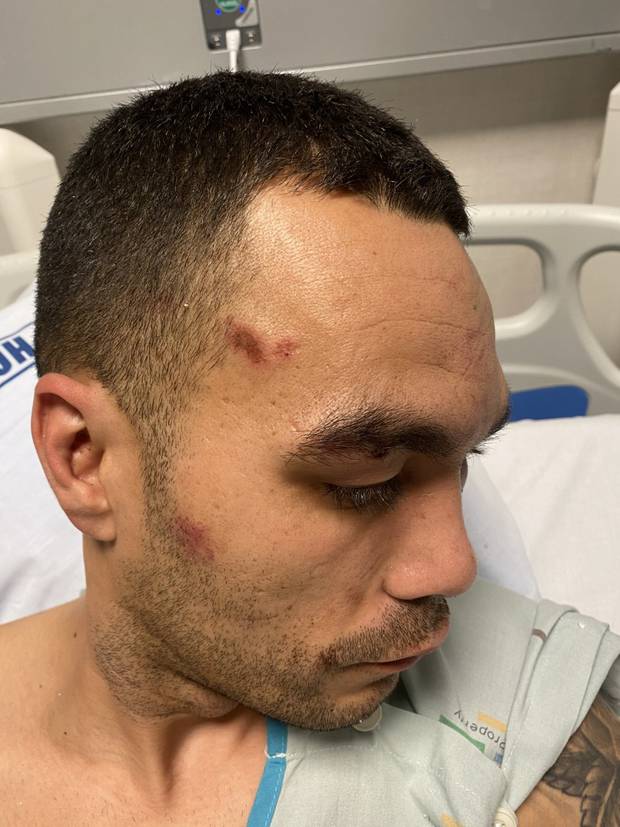 Nikau Andrews has injuries on the side of his head which he believes were caused by being pushed around on the ground. Photo / Supplied

"Based on the information I have to hand, I am confident police acted in an appropriate and professional manner in a volatile and dynamic situation, and upon becoming aware, prioritised the man's medical treatment over keeping him in custody.

"It is important to note that this video starts part-way through the interaction between police and the alleged offender.

"We would encourage care to be taken when viewing images or video in isolation as there is often a lack of context to the situation.

"Safety and Police's risk assessment tool known as TENR (Threat-Exposure-Necessity-Response) guides our responses and actions, including tactical options and any use of force."