Evidence of further human remains has been discovered inside Pike River Mine, where 29 men died after explosions ripped through the coal mine 11 years ago.

Imagery work from a new borehole has captured evidence of human remains inside the mine, 50km northeast of Greymouth on the South Island's West Coast, police say.

Families of the men - no bodies have been recovered since the November 2010 disaster - have been told.

The images, which have been reviewed by pathologists, show two sets of probable human remains and one set of possible human remains, Detective Superintendent Peter Read says.

"The images were taken in the area of One West Mains, which is the western extremities of the mine workings. It is believed that five men were working in this area."

The discovery follows another of human remains last month.

In that instance "two bodies with the possibility of a third" were spotted in images from boreholes, Read said.

Last month's images, also reviewed by a pathologist, were in an area police knew to be where six or eight men were when the disaster occurred.

The bodies were in the "furthest part of the mine from the entrance", which meant police wouldn't be able to recover them, Read said last month.

None of the remains seen in the mine have been identified. 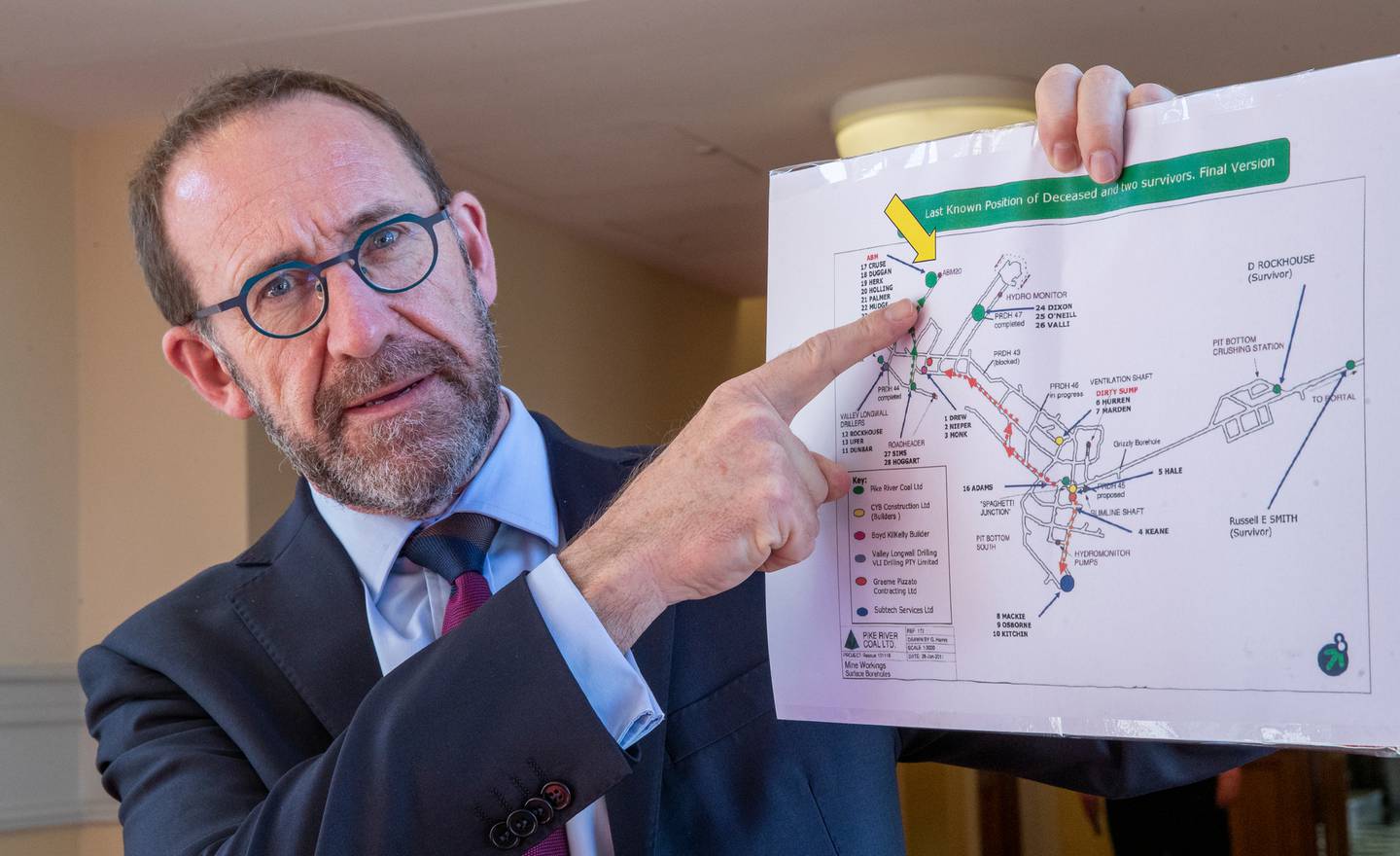 Pike River Re-entry Minister Andrew Little indicates where in the mine the remains discovered last month are. Further remains have been found this week. File photo / Mark Mitchell

Out of respect for the families, and because they were obtained as part of an ongoing criminal investigation, the images are not be released at this time.

Both sets of images were taken since the additional borehole drilling programme started in June, Read said.

That programme was to end two days ago, but police - who are investigating the disaster - last week received approval for the drilling of an additional borehole at the mine.

"The drilling programme will therefore now continue into the New Year."

The additional borehole would give police valuable information to assist the investigation into the cause of the explosion, he said.

"It's imperative that we do everything possible to provide the men's loved ones with as much knowledge as possible about what happened that day."

He was thinking of the killed miners' families and loved ones as they processed the latest discovery, Read said.

"The search for answers over the last 11 years has been a long and painful journey for the families and my heart goes out to them."

Some Pike River families have fought for years to get authorities to find bodies in the mine but, speaking after last month's discovery of remains, Minister Responsible for Pike River Re-entry Andrew Little said while the finding was "significant" it was unlikely the remains would be removed.

The Pike River Recovery Agency earlier safely recovered the tunnel as far as the roof fall at the end of the drift in February at a cost of $51 million, more than double the original budget.

He confirmed the Pike River agency is at the end of its budget and said advice from police and the agency point towards a recovery being "impossible", Little said.

Bernie Monk, whose son Michael died in the disaster, said after last month's discovery of remains the Government, WorkSafe and police had let the families down.

The Royal Commission on the Pike River Coal Mine tragedy found that the "immediate cause of the first explosion was the ignition of a substantial volume of methane gas", but could only speculate on what might have triggered ignition.

Mine owner Pike River Coal Ltd hadn't completed the systems and infrastructure necessary to safely produce coal, and its health and safety systems were inadequate, the commission's report said.