Six years after an internal review into the way the New Zealand Defence Force handles sexual assault complaints within its ranks, former employees say a code of silence prevails and that women who do come forward are punished for doing so. Jeremy Wilkinson from the Herald's Open Justice team reports:

Nicole Leger says she has been living through years of hell.

After a heavily publicised two-year court martial at Trentham Millitary Camp resulting in a severe reprimand, she felt forced to leave her dream career.

The former leading aircraftman in the Royal New Zealand Air Force pleaded guilty to taking a Class B drug and assaulting a sleeping female comrade while at a party at her flat in 2020.

But, as was revealed in court in January, months earlier she'd made a formal complaint about a Defence Force sergeant she alleged touched her inappropriately multiple times while she was a sober driver for an event.

As Leger puts it; it was a tale of two complaints.

"Was he taken to court martial for getting drunk and touching me without my consent? No," she tells Open Justice in an exclusive interview.

"If I was raped in the military I would never come forward."

Leger says the difference in the way the two complaints were handled would be laughable, if it wasn't so depressing.

"It just seems like such a clear 'f*** you', after I'd made a complaint against a superior officer."

Six years ago, the NZDF commissioned an internal review into the way the military handles sexual assault within its ranks after numerous complaints.

But two years ago, an external review found a code of silence prevailed. And a number of former NZDF employees have told Open Justice that silence about sexual assaults is still pervasive, and those who do speak out immediately regret it.

Feeling unsupported by the organisation, Leger chose to leave the Defence Force on April Fool's Day this year – a date she says is fitting given how laughably the military handled the last two years of her time there.

Dr Ellen Nelson is a former officer in the army who interviewed former female Defence Force members as part of her PhD in 2018. She was then commissioned by the army in 2020 to build on that research by interviewing serving members about their experiences with sexual assault.

She was "heartbroken" to find out that from a sample of 27 women, half had experienced some kind of sexual assault or rape while serving.

Nelson tells Open Justice that women had little trust in the military to take complaints seriously.

"There are significant consequences for women when they do report sexual harm; Not being believed, being told they're making too big a deal of it, that it's their own fault. Having the perpetrator either not really disciplined properly or in a very insignificant way.

"They've seen other women kind of annihilated, and the aftermath of reporting is often more traumatising than the actual incident itself."

Nelson says that while she was serving she wasn't consciously aware of how inappropriate some of the language and the groping was. Ellen Nelson in Afghanistan in the early 2000's. Photo / Supplied

"It was only after I left that I then reflected on my own experiences … I thought, 'Wow I can't believe I thought that was acceptable behaviour'.

"What I think makes it so intense in the military is that it's an organisation that was originally made up of men, for men, with cultures and behaviours designed for men.

"But when women were then able to join, the culture didn't shift. If you join you need to fit in, and because it's hyper-masculine it can breed a culture where there's no respect for women.

"There's a spectrum of bad behaviours - when they allow the low-end of the spectrum to happen, it lowers the expectation of how they'll handle the bigger stuff."

Nelson says while it's not perfect, the military as a whole is evolving in a positive way.

"I do believe that they get there's a problem and they're trying to fix it, and that's an improvement in itself.

"A decade ago, I don't think they had the appetite to acknowledge the issue let alone solve it."

A tale of two complaints Leger used her court martial to bring attention to what she felt was a huge disparity in the way her own complaint was handled, compared to the one levelled against her.

Leger complained in 2019 to her warrant officer and it was escalated higher. But she claims she was never told she needed to make a formal complaint. And she says she was never interviewed formally about it.

"I was told an investigation had been done, and I just kind of trusted the process I guess."

Two weeks after the incident the investigation had concluded with no consequences for the man involved.

"You want people in the military to come forward and talk about these things, but then you shame them when they do."

Leger hosted a party at her flat in June 2020 where she was handed a drink, which she began consuming before being told it contained MDMA.

She then started to exhibit unusual behaviour and told people at the party "I'm on drugs, I've taken MDMA".

Leger then offered her room to a colleague – who has name suppression – who wanted to rest.

The court heard that Leger entered the room while the complainant was sleeping and put her face very close to the other woman's and touched her shoulders.

She was taken to trial by court-martial – a process which took almost two years to resolve – during which time Leger says she felt like she was treated badly by the rest of her unit, unable to leave the Air Force and unable to put it behind her while the trial stalled.

"At the end of the day I touched someone that didn't want to be touched and I have own that," she told Open Justice.

At the court-martial in January her lawyer Michael Bott told the court his client's offending was "far more vanilla in nature" than the offending Leger had been the victim of months earlier.

He said the contrast between how the incidents were handled was stunning.

"The fundamental thing that jars in this case is the disparity in treatment between Ms Leger as a complainant in terms of being the recipient of repeated, insistent and unwanted touching by a senior officer, with the way that she was treated with a one-off incident that was nowhere near as intrusive or indecent as that she was subjected to."

Judge Kevin Riordan who was presiding over her court martial promised to investigate Leger's claims, before then giving her a severe reprimand.

Two months later he wrote to Leger to follow up on his promise.

"You will recall that at the time that you presented this evidence to the Court, I expressed my concern about the issues you had raised. Furthermore, the whole Court asked me to record in sentencing you that its members were disturbed by the apparent disparity in treatment," he said. 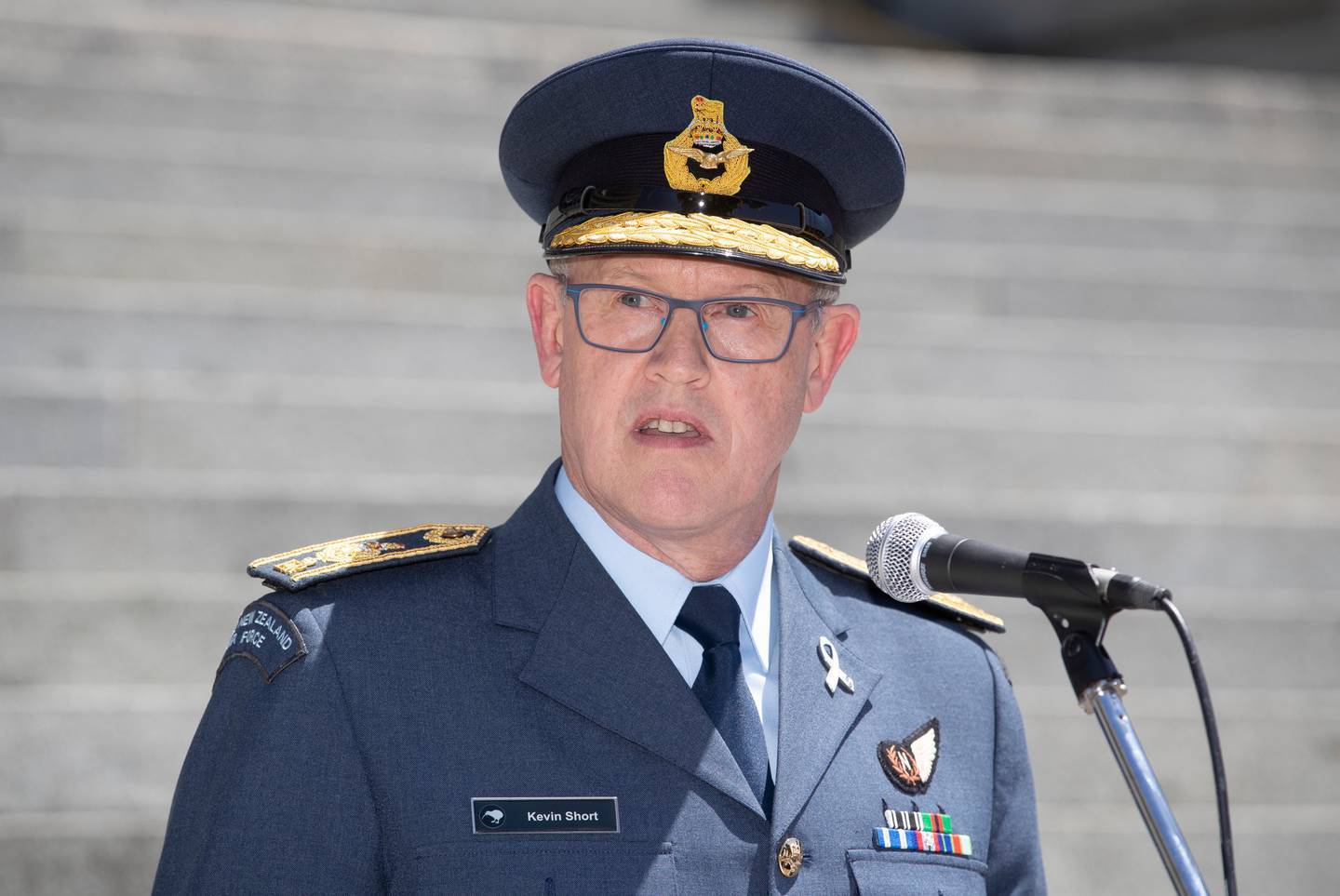 "For my part, I think that the issues you very bravely raised in Court show that there is work to do to ensure that accused persons have all the information that they will need to face the difficult process ahead of them.

"I am not convinced that, at present, they always do."

Judge Riordan also attached a letter from the Chief of the Defence Force, Air Marshal Kevin Short, which said that he'd ordered the commanding officer of Leger's old unit to reinvestigate her complaint.

"I found the CO appears to have erred in his application of the test of well-foundedness when determining the allegations stemming from the 2019 incident," the letter said.

"Accordingly, I intend to direct that the current CO reconsider the well-foundedness of those allegations."

The NZDF said this week investigations were still underway.

"I didn't leave because I was assaulted. I left because of their response to it," Sarah – not her real name – tells Open Justice.

"It was almost like a parody of how to not handle a sexual assault complaint."

Sarah was working for the Defence Force in 2020 when she alleges she was assaulted at a team-building event alongside other colleagues.

She claims one of her team members attempted to take her bra off after forcing her to get up and dance with him.

"I couldn't get away because he was holding me so tightly."

A senior team member at the event told the man to stop after he allegedly assaulted another woman. A male staffer later complained about the incident and Sarah and her colleagues were interviewed by an external agency. But she claims that in the eyes of the NZDF neither she nor the other women were the main complainants, just witnesses, and meant they didn't have access to documentation around the incident.

The man was still allowed to work while he was being investigated which Sarah says made her feel unsafe.

The man ended up leaving the military, as did Sarah, and she then took out a personal grievance against the NZDF.

In a letter sent to Sarah, the NZDF said that suspending the man from work was not an option because there was no reasonable likelihood of further offending.

"Alcohol played a major factor in [the man's] conduct and as such no further incidents occurred," the letter said.

Sarah felt as though they were blaming alcohol on the man's inappropriate behaviour.

"Apparently if you're drunk you can do what you like."

Leger wants a formal apology for the way she was treated, as well as a clear pathway for how complaints should be handled.

It is something she says should have been established in Operation Respect, or after a damning review several years later which identified the issues.

In response, Air Commodore AJ Woods says sexual abuse is not just an issue for the NZDF.

"For decades sexual abuse has not been spoken about publicly, however there has been a change in more recent years.

"Unfortunately, such a complex societal issue is proving difficult to remedy quickly. The work to address fairer processes for people reporting sexual abuse is ongoing, both within the NZDF and in society as a whole."

Woods says since Operation Respect, the NZDF has made a commitment to the response to and the prevention of harmful sexual behaviour.

"As part of its commitment to ongoing improvement in this area, the NZDF has engaged independent legal advice around enhancements to its administrative complaints processes (including sexual harassment), as well as its handling of historic sexual violence allegations."

Despite her experience Leger says she's filled with grief at the death of her career in the defence force.

"I'm sad I can't put my uniform on for Anzac Day … and it breaks my heart that it had to end the way it did. I was genuinely proud to serve.

"On my last day not one person in my unit was there to wish me well … it would have meant the world to me, something so simple."

Sarah just wants the NZDF to be a safer place for women who work there. She says change isn't happening quickly enough and fears for women still working for the military who are too afraid to speak up.

"I just wanted to force them to apologise and stop pulling this crap.

"I have friends who say they would never report an assault again, because of how they were punished for it.

"The women that I spoke with all congratulated me for making a personal grievance … but they would never do it themselves."