Artist Nichola Romney and wharfie Alan Clarke can now be named as the pair who falsely used the identities of two Māori to make it look like it was them delivering a politically charged message.

Romney and Clarke were sentenced this month, after seeking a discharge without conviction and continued name suppression. When the judge declined suppression, they immediately appealed and were given 14 days to lodge the appeal, which lapsed today.

The pair were charged last May with obstructing the course of justice and later admitted an alternative charge each of making available false documents. The charges were linked to flyers the pair made and distributed to Nelson businesses, which included threats that people would be "hunted down" for appropriating Māori culture.

Romney has been controversial in the past for art that pushed boundaries, and once made headlines for faking a persona when it was revealed that the artist known as Nikki Huizinga was also Nichola Romney.

The Nelson Mail reported at the time that the double identity which was not picked up by the art community or disclosed by Huizinga at any point, and was dreamed up by the artist so she could paint more freely about topics such as the hypocrisy of religion without her religious husband's family judging her. 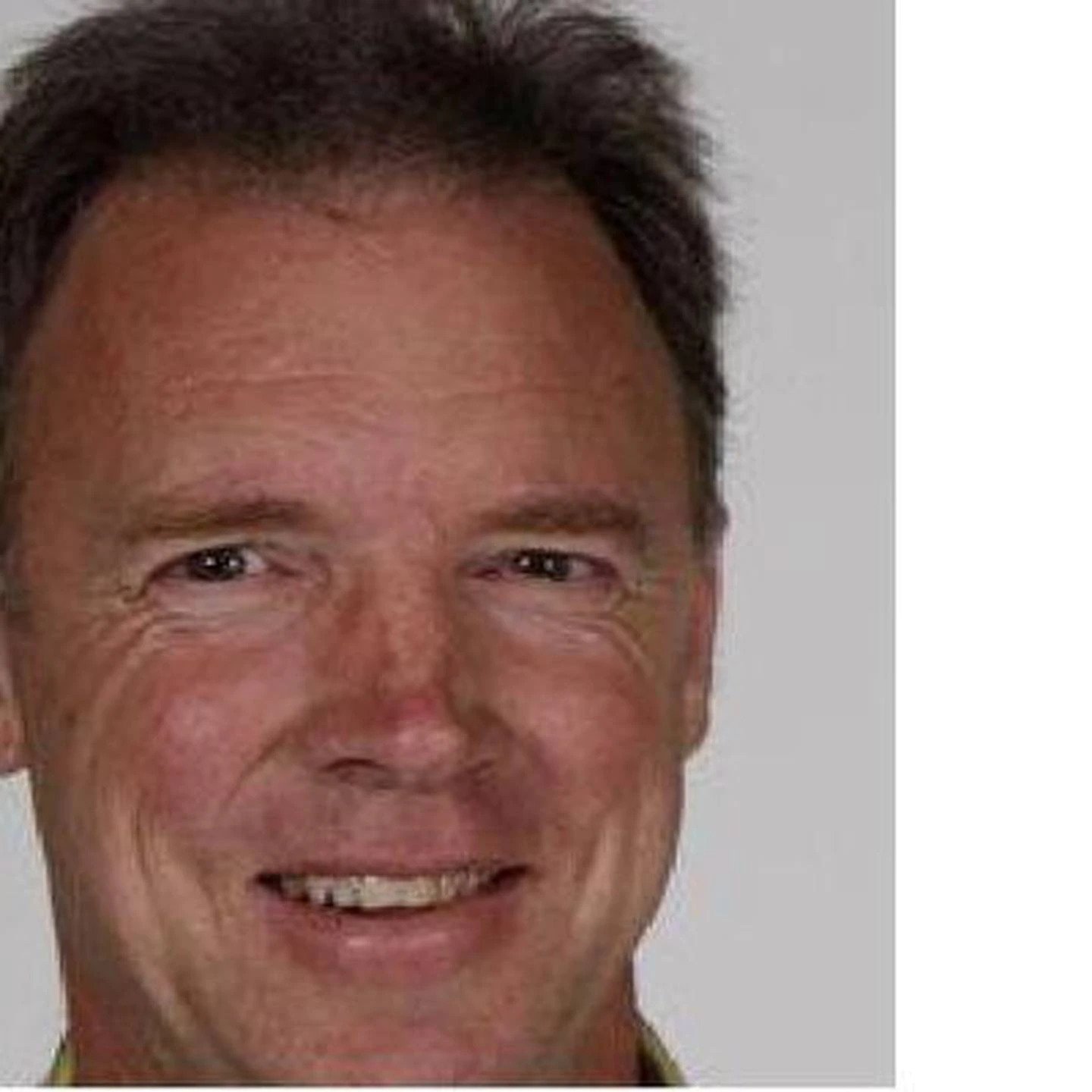 Former community newspaper editor Alan Clarke has been named as one of the two who sent out flyers which used forged identities. Photo / ex Facebook

Clarke, her partner at the time the flyers were distributed around Nelson, is a former Nelson journalist, turned artist. His current occupation listed on court documents is a stevedore.

They also featured comments taken from the Facebook group Our Culture Is Not Your Pay Check! (sic) which highlighted the "alarming amount of non-Māori, non-Aotearoa businesses abusing and disrespecting things such as haka, kupu Māori, moko, kowhaiwhai, whakairo and tukutuku designs".

But neither of the men featured knew anything about it, nor did they live in Nelson where the material was distributed in November 2020.

Romney and Clarke were caught after police identified their car in CCTV footage. Disguised in wigs and hats, they drove around at night, delivering the flyers to businesses and organisations in central Nelson.

It led to a search of their home where a pile of documents was found, including material relevant to the comments used on the flyer. Romney initially denied responsibility and blamed the two men portrayed, but ultimately admitted what she had done.

Their lawyer Michael Vesty argued their actions were in response to threats and intimidation aimed at them in line of Romney's work, which drew on Māori culture, and that their safety was at risk if their names were to be published. 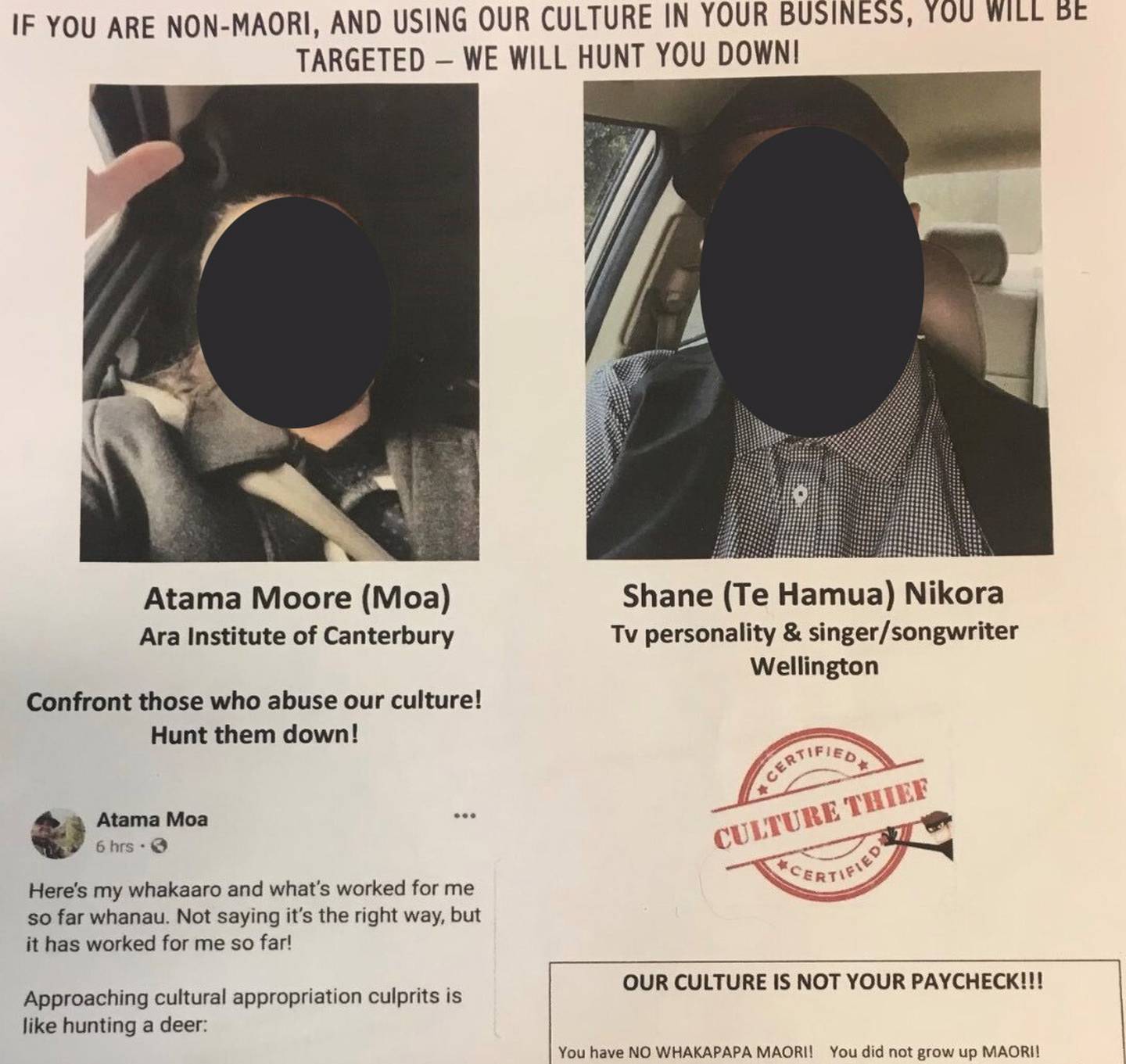 The men whose identities were falsely used to distribute a politically charged message. Their faces have been blocked out for this story. Photo / Supplied

He said they had been at the receiving end of abuse and threats, including right up to sentencing when comments were being made on social media in anticipation of name suppression being lifted.

Crown prosecutor Jeremy Cameron and Judge Jo Rielly said at sentencing the pair failed to reach the thresholds for which a discharge without conviction would apply, or the reasons why suppression should continue.

Cameron said a conviction and discharge was appropriate but that permanent name suppression should not be granted.

Judge Rielly convicted the pair, but without further penalty to reflect the hardship they had already suffered, including having their homes and a business searched under the auspices of hate speech, facing a criminal charge and having their relationship fall apart. 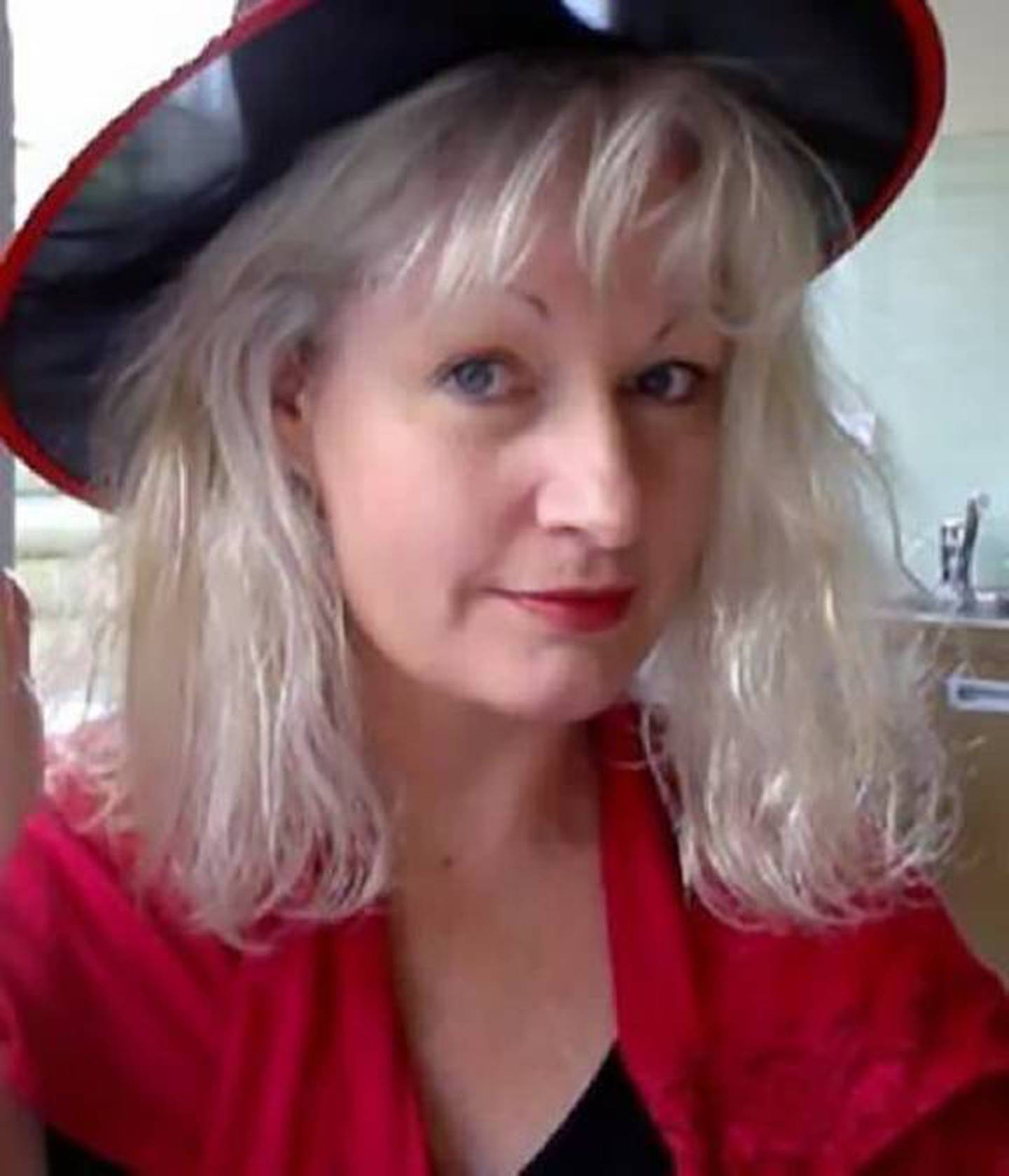 Nelson artist Nikki Romney, in an earlier image, has been named as one of the two responsible for sending out flyers using forged identities. Photo / Supplied

Cameron said the court was essentially dealing with a "basic fraud", which had had a high impact on the two principal victims. He considered the offending, which was conducted in a "very public manner" was of moderate gravity. Judge Rielly said it was concerning and moderately serious.

"You were happy to thrust two men into the limelight and cast suspicion on their role of villain," Judge Rielly said in sentencing.

She described the offence as "bold, yet hidden" and also acknowledged that some of what the pair had been exposed to in terms of threats were "extremely concerning and disturbing", but she understood they had not come from the two men featured in the flyers.

She agreed the topic of cultural appropriation was a "hot potato", which each had intimately experienced, but their actions in November 2020 were designed to create fear and division. They had also created fear and alarm among those who had received the material, some of whom reported feeling either shocked, scared, targeted, nervous, insulted, offended and sickened.

The couple regretted the harm caused to those who received the flyers.

Judge Rielly said the two men featured in the flyers felt they had been stripped of cultural identity, that their whakapapa had been compromised and that they had been misrepresented.

"They have every right to be upset."

Romney indicated in a statement issued to Open Justice through her lawyer that she remained victimised:

"The words used in the flyer were theirs and not ours.

"We distributed the flyers after unsuccessfully seeking help from police,
MPs and government agencies.

"We wanted people to know what was going on."