The family of Lena Zhang Harrap has expressed their gratitude for the outpouring of support and love for them and their daughter but asked that people's generosity be directed to two charities that supported her.

"With the outpouring we have received, we are eternally grateful," they said in a statement issued by police.

"We acknowledge that people want to express their grief and love for Lena and our family.

"Lena received great joy, friendship, acceptance and belonging through two amazing charitable organisations; those being Heart Kids and StarJam. As such we would ask you to direct your aroha through supporting these two charities, so others may continue to benefit."

A man is due to appear in court today faced with the murder and sexual violation of Lena Harrap, who disappeared on a walk in an Auckland suburb two days ago.

Police confirmed this morning a 31-year-old man has been arrested and is due in the Auckland District Court today.

Harrap's body was discovered earlier this week barely a kilometre from her Mt Albert home after her daily walk turned to tragedy.

This morning police said they had received a significant amount of information from the public following an appeal yesterday to help identify a person of interest to this investigation.

As a result of enquiries into this information by Police, a man was found in a vehicle in Papatoetoe at 1.30am and was arrested.

Detective Inspector Aaron Pascoe said police hoped news of the arrest would provide some reassurance to the Mt Albert community.

"This was a sickening and senseless attack on a vulnerable member of our community, which we know disturbed and angered a lot of people," said Pascoe.

"While nothing will bring Lena back to her family, we hope today's arrest provides a degree of comfort and reassurance knowing the person allegedly responsible for her brutal murder is in custody where he belongs.

"We want to acknowledge and thank the public for their assistance in providing valuable information which led to an arrest in this homicide investigation."

Police were not currently seeking anyone else in relation to this matter, however enquiries continued into the investigation with a fresh appeal for sightings of a car. 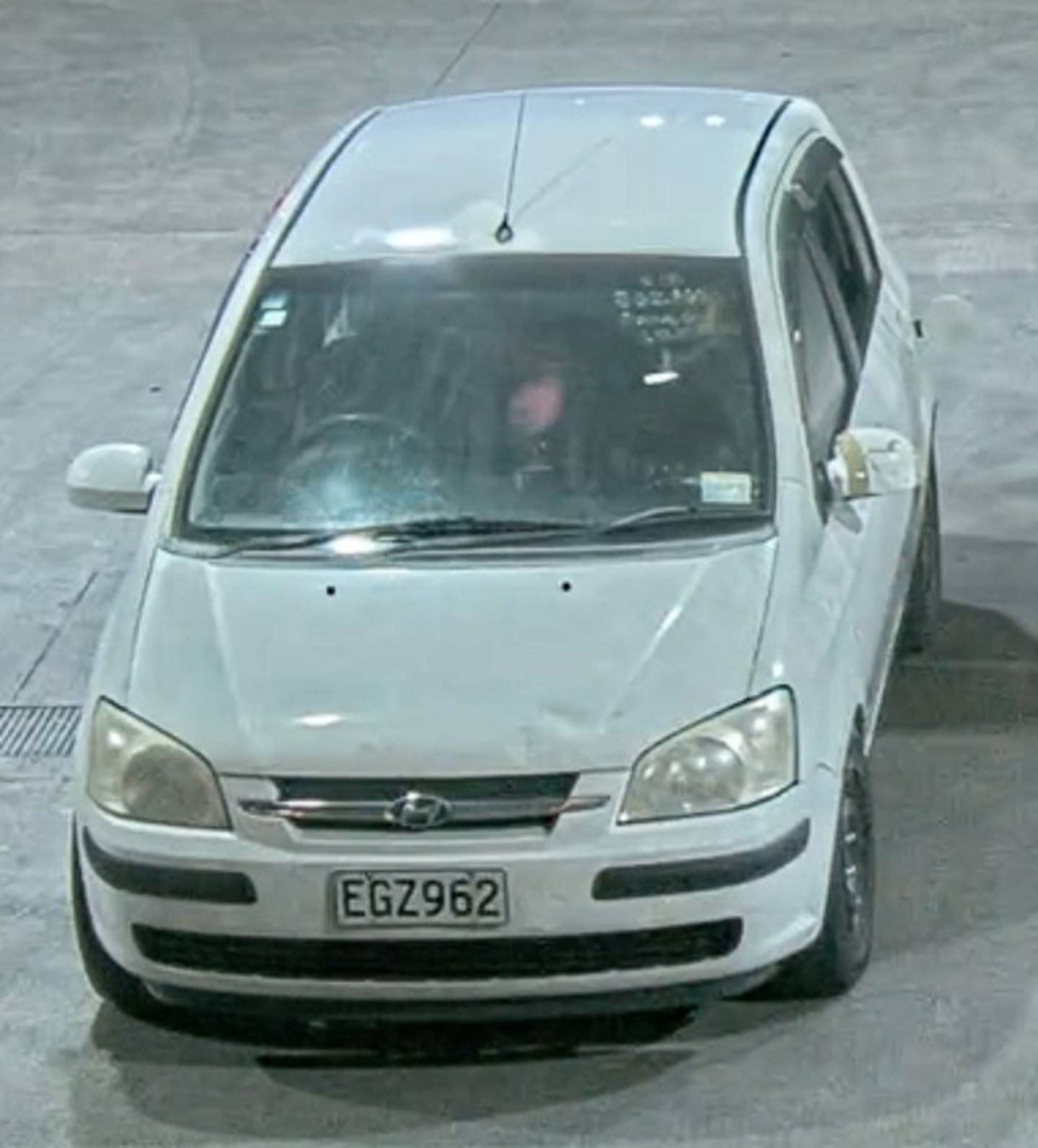 A fresh appeal has been made for sightings since Wednesday of a white Hyundai station wagon. Photo / Supplied

Police asked anyone who had seen a white Hyundai station wagon, registration EGZ962, since Wednesday over the past few days to contact the investigation team.

Pascoe said the dead woman's family had been notified about the arrest and police were continuing to support them at this extremely difficult time.

Pascoe praised Aucklanders, in particular those living in Mt Albert and Mt Eden communities, for being so helpful to police throughout the murder inquiry.

"Without the help of the public we would not have been able to achieve this result for the family and for Lena as quickly as we have," he said.

"So thank you from the New Zealand Police."

Those in Auckland's Down Syndrome and StarJam community and teachers at her former high school have been left heartbroken by the 27-year-old's death.

On stage Harrap shone, her enthusiasm and infectious smile bringing joy to those watching and performing alongside the StarJam dancer who gave every routine her best.

Earlier police said they were stepping up patrols in the suburb as they hunt for her killer, carrying out additional reassurance patrols and speaking to local residents on the street she was last seen walking up early Wednesday morning.

The New Zealand Down syndrome community said it was shocked by the heart-breaking news.

The organisations were now liaising to see how they could most effectively support the Harrap family and honour a life tragically taken.

StarJam, an organisation that uses music, dance and performance to connect young people with disabilities, posted a photo of Harrap, her hair being curled ahead of a show.

They paid tribute to the "true Jammer", saying that for more than a decade Harrap had been part of the city's dance crew and known for her infectious smile and enthusiasm.

"For over 12 years, Lena has been a true Jammer in Auckland Magic Movers and more recently the Central Alumni All Stars; greeting everyone with her infectious smile, genuine heartfelt support and inviting her fellow Jammers up to join her Spot the Talents. Lena, you will always be in our hearts – our thoughts go out to your family and friends," read a Facebook post.

One woman who worked at StarJam said Lena brought a special touch of magic to the stage.

Ella Stuart said: "It was such a privilege to know Lena - she was always so enthusiastic with everything she did and her love of dancing was truly wonderful to watch. She put the 'magic' in Magic Movers! She will be so missed and in our hearts and memories always." 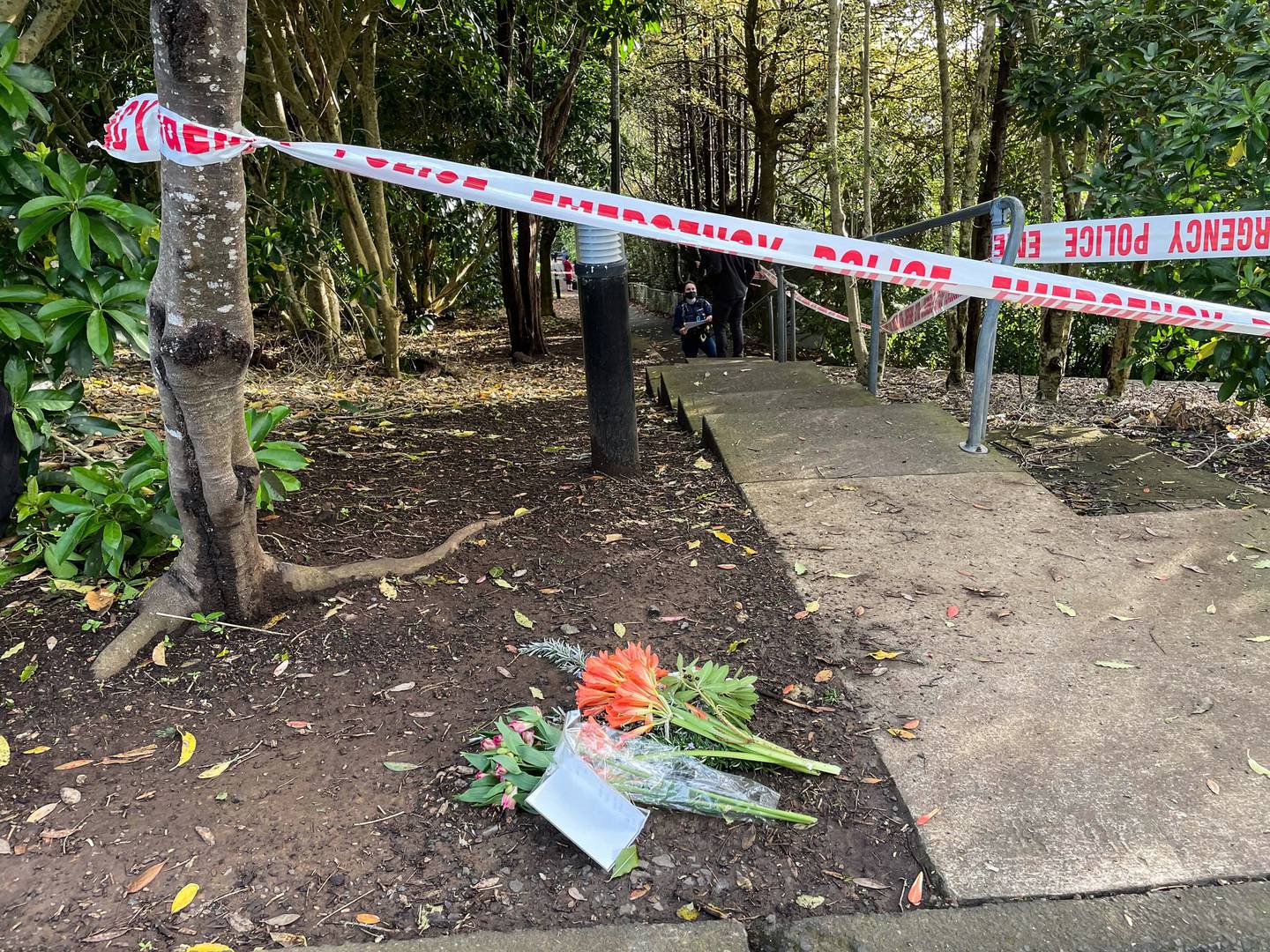 Flowers lie at the top of the bush-lined walkway where Lena Zhang Harrap's body was found on Wednesday. Photo / Miriam Burrell

Another woman whose sister did StarJam alongside Harrap shared a touching post.

"She was so joyful. She's dancing with the angels tonight," wrote Hayley Cargill-Pautu.

Lynfield College principal Cath Knell today said it was an upsetting time for everyone who knew Harrap and the school's thoughts were with her family.

"Lena may have been small in stature but she had the biggest heart. Her wicked sense of humour backed up by a mischievous smile brought much joy to those who taught her. Confident and independent, Lena placed no limitations on herself and gave everything her best shot," said Knell.

She said the former student would be remembered fondly and always with a smile.

The walkway between Grande Ave and Summit Dr where her body was found in an area of bush alongside the paved pathway remains cordoned off today as police hunt for Harrap's killer.

Yesterday, as the homicide investigation was launched, police released a picture of a dark-skinned balding man with a distinct mark on his forehead wearing a blue jumper walking along Grande Ave shortly after 7.30am. 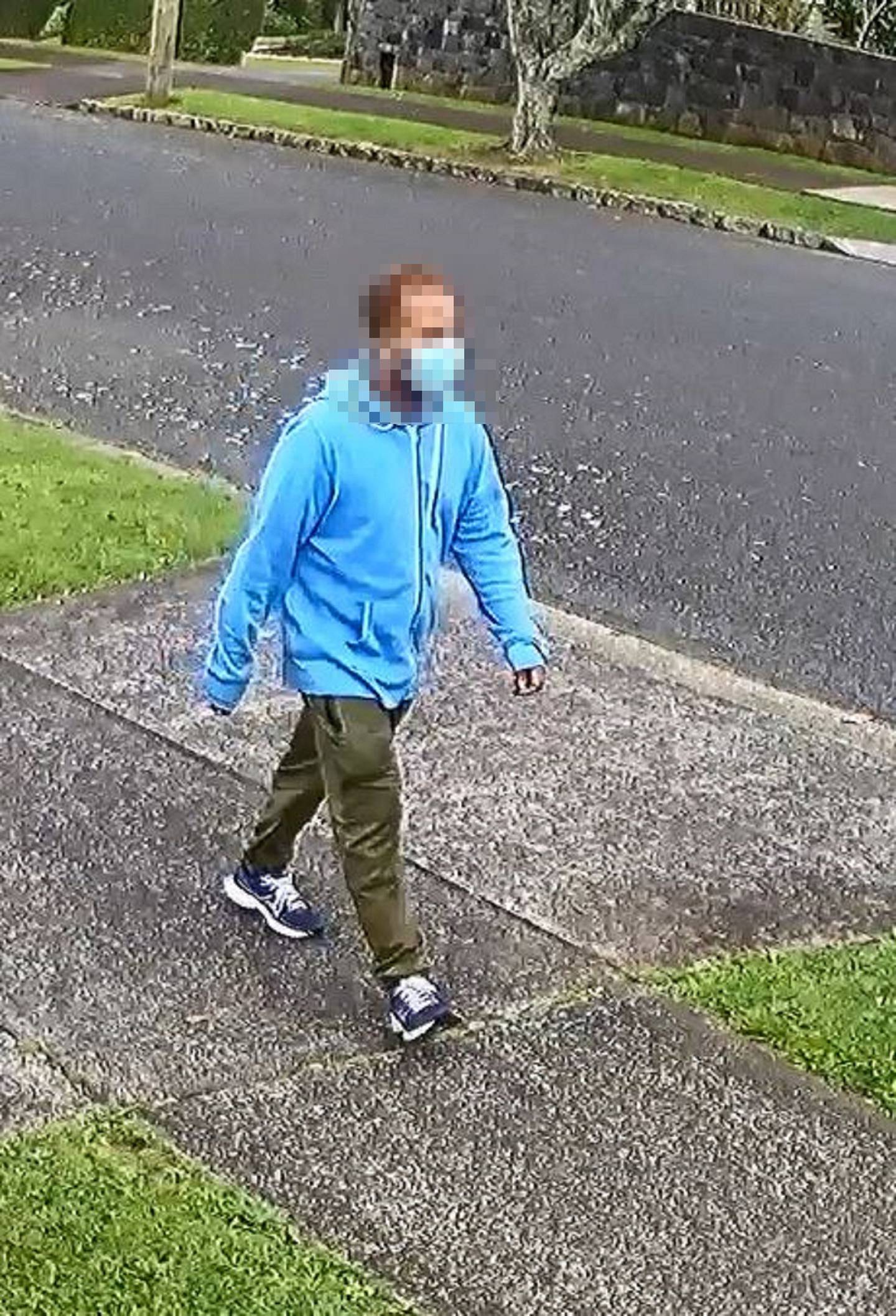 They have appealed for this person or anyone who knows him to come forward, saying they believe he can assist the investigation.

Police also appealed to anyone who saw Harrap or the mystery man to contact the investigation team.

"We also want to hear from any residents who live along any of the above streets, including Summit Drive, who have CCTV cameras that may have captured Lena or this male in a blue jumper walking past their property," said police.

Harrap had gone on her daily walk leaving her Jersey Ave home at 6.30am, moving slowly along Richardson Rd, before turning left up Grande Ave where she was captured on a resident's security camera at 7.30am. 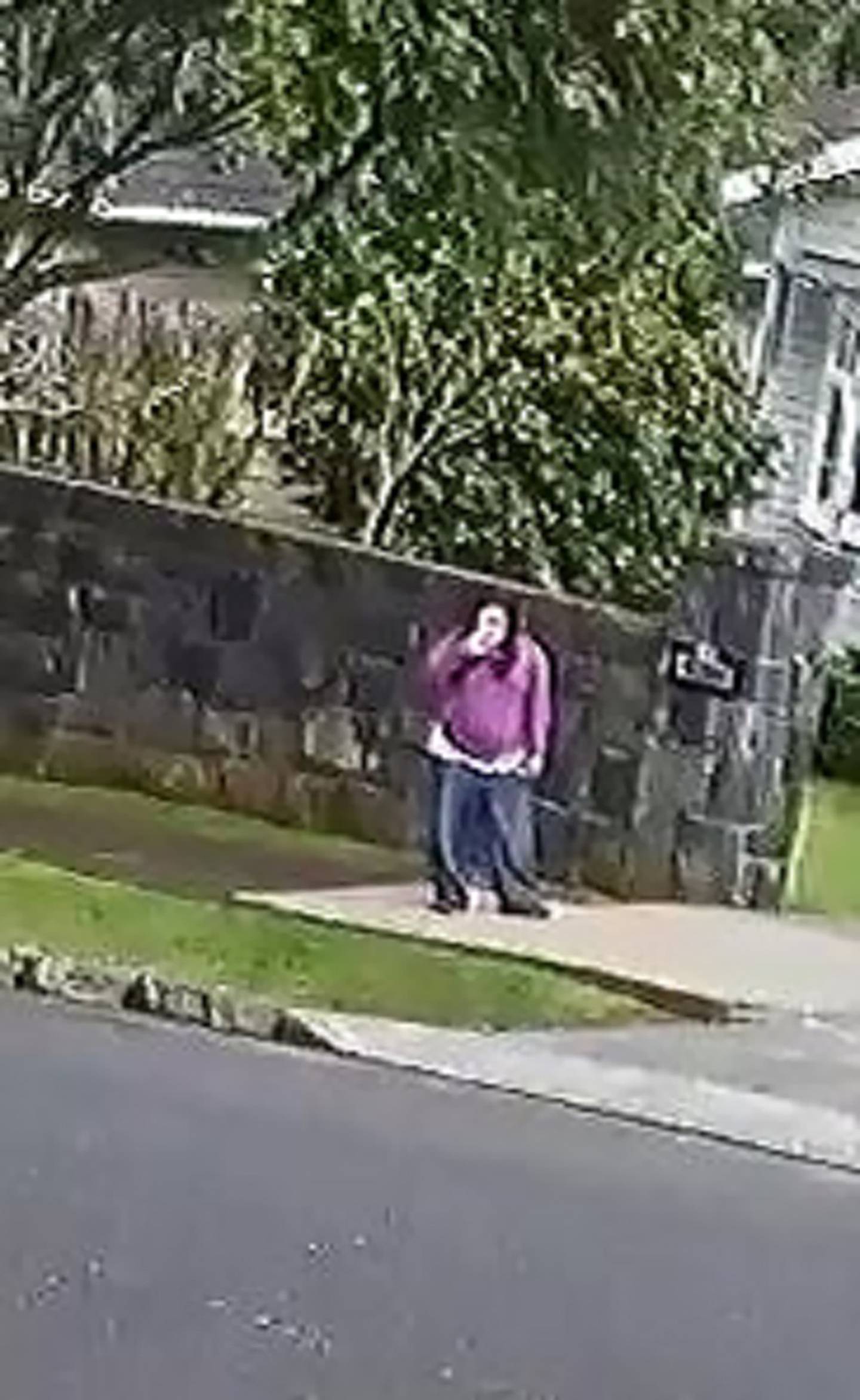 Police said they were working closely with and supporting Harrap's family, who were understandably devastated by the news.

"We know the news about this homicide investigation will be distressing to the public and to the local community in particular and we want to reassure them that Police have a large investigation team working hard to identify and locate anyone involved in Lena's death."