Police say the senior hierarchy of the Mongols motorcycle gang were arrested in raids across the Bay of Plenty this morning.

The arrests would result in at least 228 charges being laid, Detective Superintendent Greg Williams said at a press conference this afternoon.

It brought the total number of firearms seized off the Mongols during the past four months to 28, including AR15s.

The majority of the chapter "patched over" after being deported from Australia, Williams said.

More than 110 police staff, including from the National Organised Crime Group (NOCG), executed search warrants at 10 properties in the raids.

Other items seized included ammunition, and various amounts of cannabis, methamphetamine, and cash.

Williams said in the statement the Mongols were a well-established criminal group known for drug trafficking, firearms and violent offences.

"The majority of this Bay of Plenty gang were deported from Australia and were from one of the Banditos chapters in Brisbane.

"During the course of this lengthy investigation, NOCG has been able to support a Bay of Plenty response to combat and prevent violent incidents stemming from this organised crime group, which have been well documented through the media.

"These have been as recent as 12 June and again on 15 June, where senior members are now before the court on serious charges, and a number of firearms and explosive devices have been seized. This proactive action was taken to prevent an attack on a rival gang.

"What this investigation will allege is that this organised crime group was involved in the sale and supply of methamphetamine and cocaine on a commercial level into the Bay of Plenty as well as across the North Island, causing significant harm to our communities.

"The ongoing violence between this organised crime group and other local gangs is simply about controlling a share of this drug market, and all these gangs have made it clear that they are prepared to use violence to protect their share. This includes not only arming up, but a very clear propensity to use these firearms and commit other violent acts such as arson, serious assaults, aggravated robberies and serious violence, seriously impacting on the wellbeing of Bay of Plenty communities at large," Williams said.

In total there have been six known shooting incidents involving the Mongols and other gangs, police said.

Some charges have been laid in relation to these and inquiries continue, they said.

In May this year a number of search warrants were executed in Auckland and Tokoroa that were linked to this investigation.

Items seized included five firearms, approximately $400,000 cash and half a kilogram of methamphetamine.

The combined investigations will have a serious impact on the influence and offending of this gang for some time to come.

Police also continue to ask the public for information on another senior Mongols member Brodie Collins-Haskins, of Auckland, who is facing several charges.

"He could be anywhere," Williams said.

"Our view would be if you see him or observe him please contact your local police."

Collins-Haskins should not be approached, he said. The search warrants used today in Papamoa and Te Puke were the culmination of an investigation led by the Tauranga-based squad of the National Organised Crime Group.

The NOCG group was set up in the Bay of Plenty two years ago to specifically target the threat of motorcycle gangs, in particular the arrival of Australian groups, and smuggling channels through the port.

In the Bay of Plenty there are 1439 gang members - the most of any police district. 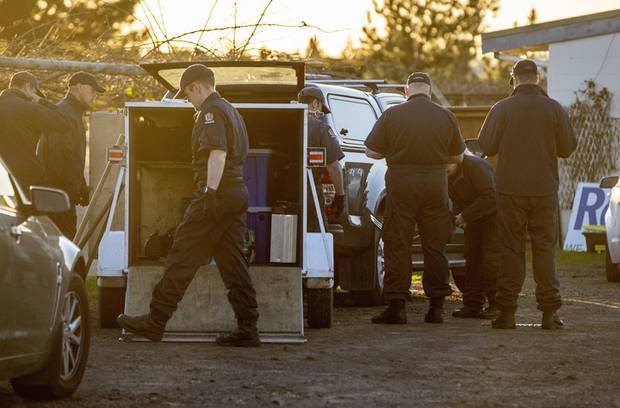 One reason for the growth is the arrival of the Australian gangs dating back to 2010 - first the Rebels, then the Bandidos and Comancheros - as well as a recruitment drive in response to the newcomers from existing New Zealand gangs such as the Head Hunters, Filthy Few and Mongrel Mob.