A young man has been accused of fabricating an indecent assault by a prominent New Zealand businessman because of financial resentment, a court has been told.

The wealthy Kiwi man is on trial in the Auckland District Court alongside his business manager, and a well-known entertainer.

The businessman is facing two charges of indecent assault - having been accused of abusing two men in February 2008 and October 2016 - and two counts of perverting the course of justice by attempting to dissuade the second complainant from giving evidence in his trial.

Yesterday afternoon, the first complainant told the court he contacted the businessman in 2008 to ask for financial support for a project.

The pair met at the prominent New Zealander's lavish home and drank gin and tonic before dinner, and wine. 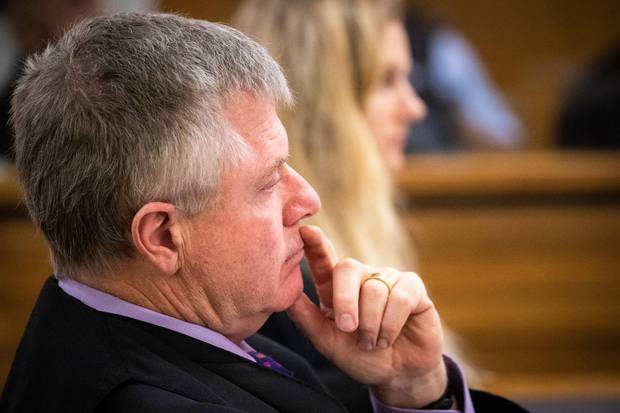 However, the evening took a turn when the businessman took the man for a tour of his home, the complainant said.

"[The businessman] took me through various rooms in the house, [it] started downstairs ... I remember a room which is quite long.

But, as the complainant explained, he began to feel dizzy and unwell.

"He came up behind me and put his hand on my ass and squeezed it and said, 'god, you've got such a sweet ass', and kissed the back of my neck and said, 'why does there have to be a [partner]," the young man said.

"I was so shocked that I just stopped and stood very still."

Today, however, the prominent New Zealander's lawyer David Jones, QC, accused the man of fabricating his story after out of spite when his project wasn't funded by the businessman.

"After being assaulted I didn't want the money," the young man said, when being cross-examined by Jones. The complainant also remained steadfast in his belief of what happened.

"I was assaulted by [the businessman] at his house on that day."

But Jones also accused the young man of "knocking back the alcohol" on the night of the alleged assault.

"That suggests I'm drinking a large quantity of alcohol, which wasn't the case," the complainant replied.

Jones continued: "You made a fool of yourself? You blew your chance because of your state?"

The young man said: "I don't have any reason to believe that I acted any way other than professionally.

"If you think for any reason that I could be doing this or making up some kind of story because I didn't get $5000, then I would tell you that is preposterous.

All three defendants had their interim name suppression revoked yesterday by Judge Russell Collins after a successful legal challenge by the Herald and Stuff. But their names will remain secret after lawyers for the accused indicated an appeal to the High Court.

The jury trial, which is set for four weeks, continues.