A "rich and influential businessman" indecently assaulted two young men before attempting to pay one of them off with offers of cash and career opportunities, a court has heard.

The prominent New Zealander's trial began yesterday in the Auckland District Court and today the Crown opened its case against the man.

He is facing two charges of indecent assault - having been accused of abusing two men in February 2008 and October 2016 - and two counts of perverting the course of justice by attempting to dissuade one of the complainants from giving evidence in his trial.

A well-known entertainer is also on trial and faces three charges of attempting to dissuade the same complainant.

A third man, the prominent New Zealander's business manager, is charged with attempting to dissuade the witness on one occasion.

All three men had their interim name suppression revoked this morning by Judge Russell Collins after a successful legal challenge by the Herald and Stuff. But their names will remain secret after lawyers for the accused indicated an appeal to the High Court. 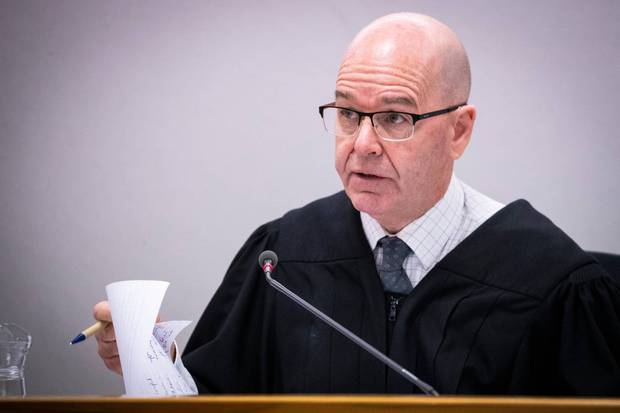 Judge Russell Collins revoked the suppression orders for the defendants but the decision was instantly appealed. Photo / Jason Oxenham

"This case is about a rich and influential businessman ... Who has used his powerful position to take advantage of others in a criminal way," Crown prosecutor Simon Foote told the jury.

Foote said the efforts to encourage one of the men to drop their allegations was "essentially attempting to silence the witness".

To "make that complaint go away", Foote said, the trio of defendants offered money and the prospect of future work opportunities.

Two other people were involved in the obstruction efforts and will later give evidence for the Crown, he said.

The first attempt, in April 2017, involved the entertainer allegedly offering $15,000 and the promise of work opportunities so long as the young man withdrew his complaint against the prominent New Zealander, Foote said.

"[The entertainer] said he was the man to fix the situation," Foote said.

However, the complainant recorded the conversation on his phone and photographed the $15,000 bank cheque - later giving both to police.

"You'd be surprised what money can do to buy people, you know what I mean?" the entertainer was recorded as saying.

"People can get nasty ... He has enough money to buy people to survive."

Foote said the prominent New Zealander was behind the attempt, but the businessman claims he had no knowledge of the approach.

The $15,000, which was transferred from the prominent Kiwi to the entertainer, was also just a normal business transaction, the businessman said.

The second attempt occurred in May 2017 and allegedly involved "elaborate" efforts by all three defendants in Australia, the court heard.

The "Gold Coast plot", as described by Foote, involved hiring a public relations expert to help "silence [the complainant]".

Tens of thousands of dollars were committed for the scheme, Foote told the jury.

The entertainer, the prominent New Zealander's business manager and two others lured the complainant - who was living in Queensland - to a meeting to discuss career opportunities, Foote said.

But the complainant was sceptical and asked a friend to come with him.

After an afternoon of shopping and dinner on the Gold Coast, the complainant was asked to drop his allegations against the prominent New Zealander.

However, the young man again secretly recorded the conversation.

Foote said a final attempt - by the entertainer alone - to have the accusations withdrawn came in September 2017, just one week before the trial of the prominent New Zealander was first due to begin.

The indecent assault of the first complainant, Foote alleged, was at the businessman's home during 2008 after the complainant said he began to fell "dizzy".

Foote said the accused then squeezed the man's bottom and said: "You have such a sweet ass."

He also began kissing the young man on the back of the neck, Foote told the court.

After returning home, the young man vomited and was "very ill" before telling his partner of what the prominent New Zealander had done, the court heard.

The second complainant, Foote explained, was staying in the businessman's home.

The businessman entered the bedroom and began trying to pull the sheets back as the young man slept, Foote said.

The complainant, the prosecutor added, also "felt ill and very weak" which was possibly a result of food poisoning.

He told the prominent New Zealander to leave, Foote said.

The accused, however, allegedly replied: "I want to hold you, I want to embrace you."

He then positioned himself on the bed and began holding the young man from behind, the court heard.

"Calm down, let me embrace my love," the prominent New Zealander allegedly said.

He then reached inside the young man's shorts and began touching him, Foote continued.

The young man was later taken to hospital and told two doctors about the alleged sexual assault, who referred the matter to police.

When interviewed by police, the prominent New Zealander vehemently denied the allegations.