Four ram raiders got the fright of their lives when they were confronted by two men mid-burglary before being chased down an Auckland motorway.

The offenders had just smashed through the Greenhithe Liquor Centre on Saturday when two locals chose to engage – blocking the offenders' path with their Range Rover and pursuing them until police took over.

One of the men, who spoke anonymously to the Herald, said they called police mid-pursuit and jokingly requested to be made temporary officers so they could complete the arrest.

"We were arguing with him going, 'Come on man, deputise us so we can chase these dudes down and pull them out of the car'," the man said.

A police spokeswoman acknowledged the distress such incidents caused business owners, but strongly discouraged members of the public taking matters into their own hands.

"This places the public at greater risk of harm and police are trying to avoid escalations in these situations.

"Our advice is to report any offending or suspicious behaviour taking place by calling 111 so police can respond and deal with the matter."

Four young people were arrested after police spiked their getaway car, after stealing alcohol and cigarettes and causing a suspected $200,000 in damage.

The man conceded his actions were "probably not sensible", but warned offenders could face trouble if they encountered people who were less forgiving.

The liquor store's owner believed repercussions for the offending were not sufficient to curb the behaviour.

It was about 11.50pm on Saturday when the two men heard a smash and the liquor store's alarm activate following the ram raid. It was estimated the youths did about $200,000 worth of damage. Photo / Hayden Woodward

The men chose to act – their patience was worn thin after similar incidents that occurred annually to local businesses over the past decade.

One of the men told the Herald he rushed to his Range Rover, hoping to block the offenders' exit, while his friend headed to the store on foot.

"My friend, who's a bit of a hard case, ran in and said, 'I hope you boys have got guns', to which they looked a bit startled.

The offenders had used one vehicle to smash through the storefront and had another as a getaway vehicle.

Once the youths managed to escape the man's vehicle blockade, they headed down Rame Rd towards the Greenhithe wharf.

Seemingly unbeknown to them, that was a slender dead-end road that allowed the two men to park sideways across the road to block their exit. 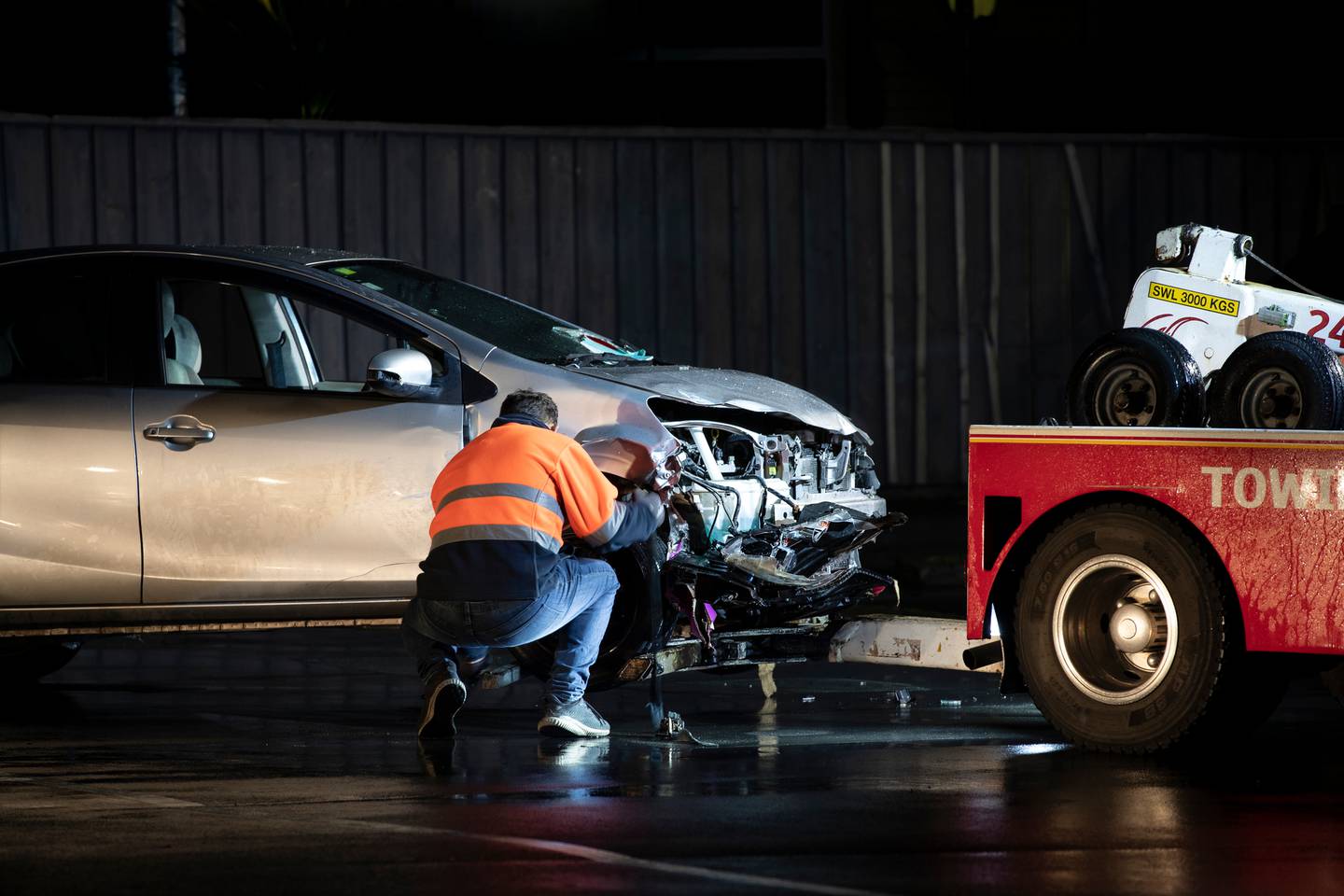 The vehicle used to ram the store was towed from the scene. Photo / Hayden Woodward

Needing to veer off the road to make it past the men, the offenders proceeded to drive down another no-exit road.

"They were right muppets," the man said.

Finally, they made it onto the Upper Harbour Motorway heading west towards Hobsonville – with the two men in close pursuit.

It was then that the men realised they should inform the authorities.

"We confronted the guys then we started chasing them in the car and then I was like, 'Holy shit, we better call the cops', so it was kind of an afterthought."

The police representative on the call predictably declined the pair's request to be deputised so they could complete the job.

"I was joking with him saying, 'Get your sergeant'."

The men followed the offenders as they turned off towards Hobsonville where they engaged in a cat and mouse game that saw the pair attempt to block the offenders' efforts to return to the motorway. 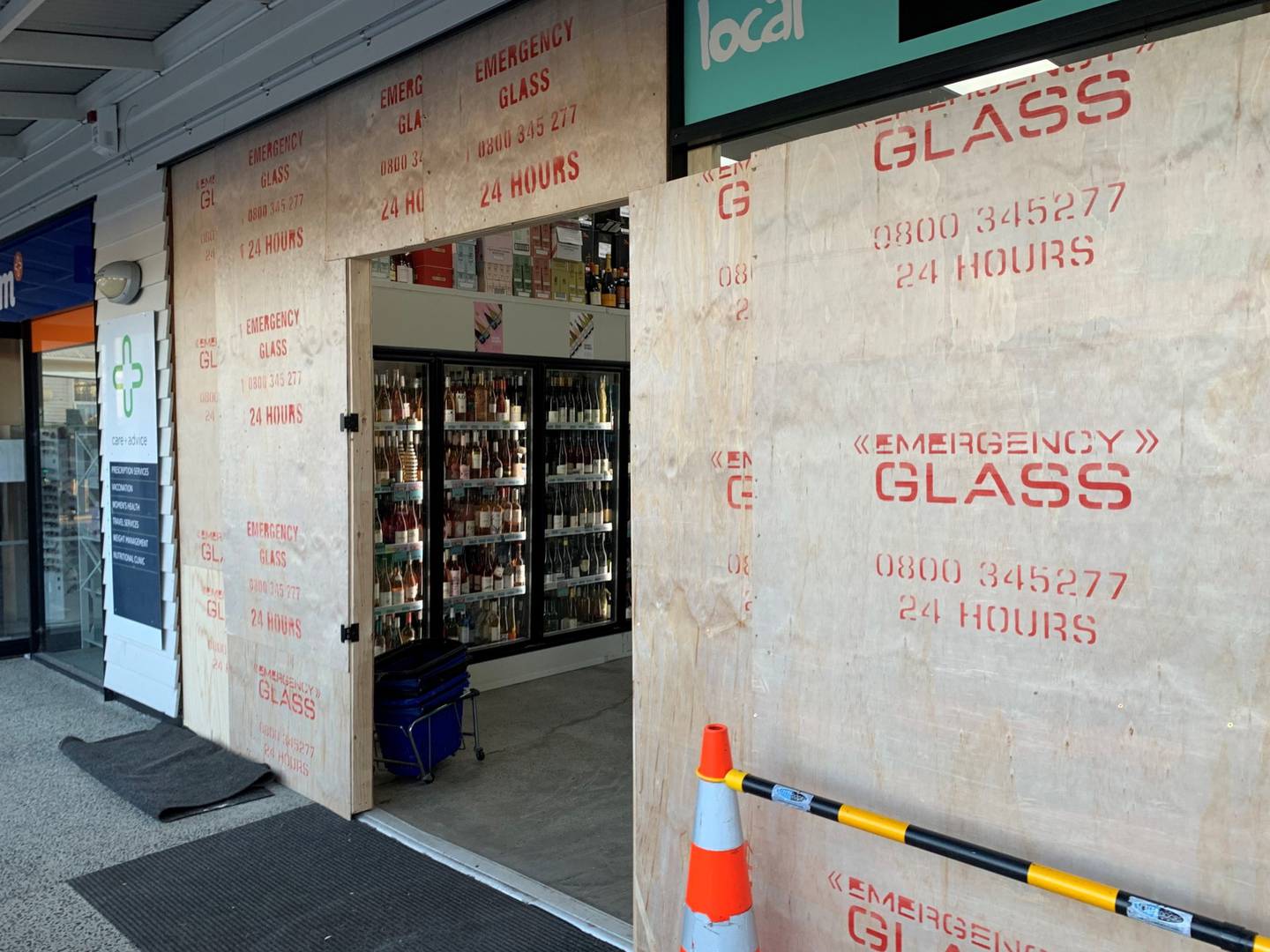 The Greenhithe Liqour Store looks markedly different after it suffered a ram raid over the weekend. Photo / Adam Pearse

They were advised their pursuit was no longer necessary when police's Eagle helicopter had located the vehicle and it was later spiked on Don Buck Rd in Massey.

"It's probably not the most sensible thing to do, but because it's happened so many times, it felt like the right thing to do for [the store owner].

"He's a good guy and he doesn't deserve it."

The man suspected it was only a matter of time before offenders got more than they bargained for during such incidents.

"At some point, somebody's going to get their hands on some guys doing this and it'll be ugly."

When the Herald visited the liquor store on Monday, staff were still cleaning up broken glass and sorting damaged stock.

Almost the entire storefront had been replaced with plywood. A pallet of unsellable wine sat outside, worth between $8000 to $10,000.

They had reportedly stolen about $400 of cigarettes and alcohol. 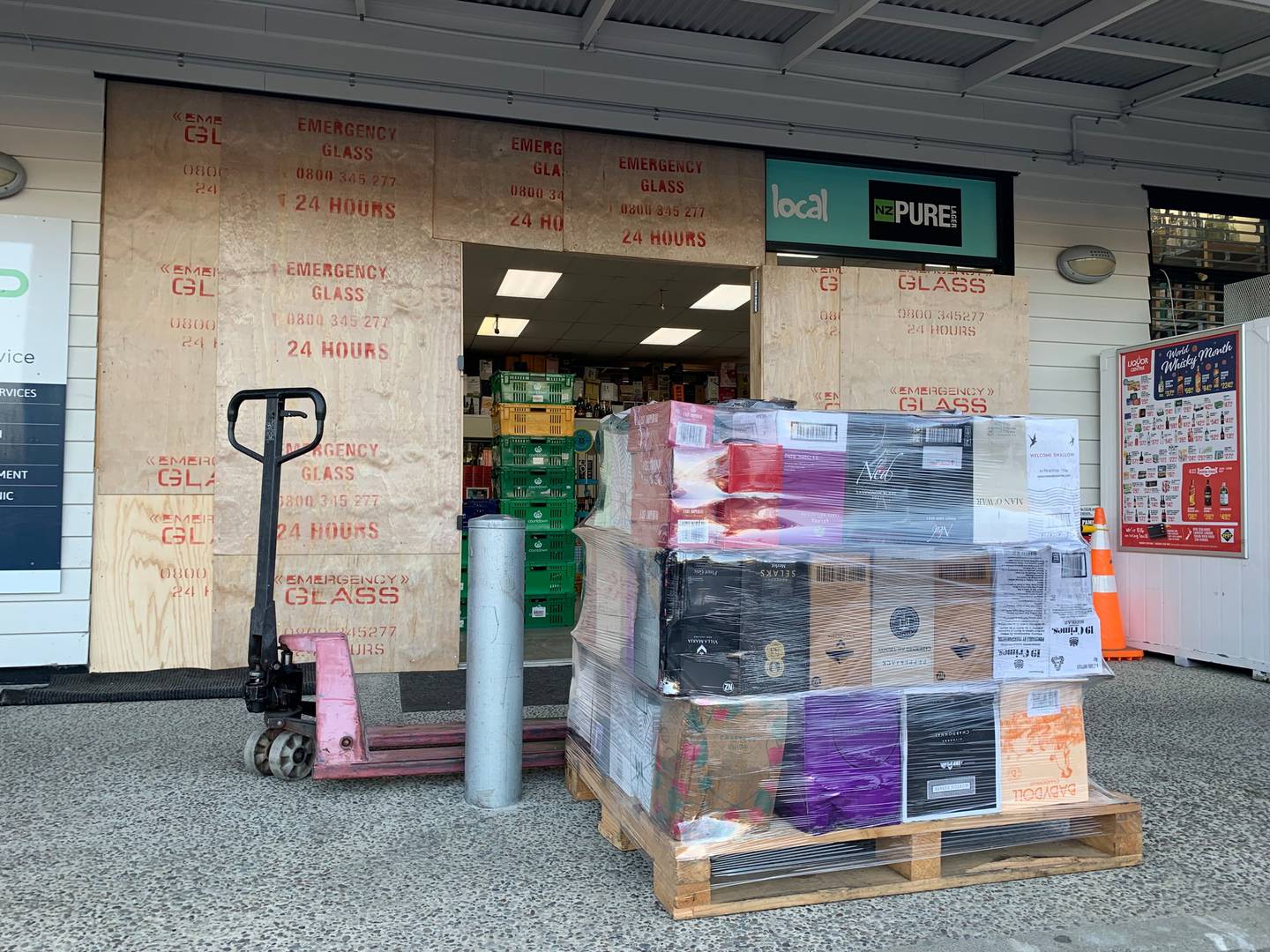 A pallet of wine, worth up to $10,000, is unsellable after the ram raid on the Greenhithe Liquor Store over the weekend. Photo / Adam Pearse

Noting the recent spike in ram raids, particularly across Auckland, the owner admitted he had feared he would be next.

"At the rate it's going, I've been expecting this for a month," he said.

He lamented extensive investment in security measures that only led to further damages.

The owner felt the repercussions for offenders were not sufficiently discouraging people from committing ram raids and burglaries, citing a similar sentiment held by others in the community.

While overall youth crime hadn't significantly increased, ram raids had attracted headlines in recent months after a spike in that activity became evident, as stated by police.