One person is dead and three police officers are injured after shots rang out at a Glen Eden house that was on fire.

Police have confirmed a man at the proprty was shot and killed by police this morning.

"The AOS [armed offenders squad] attended and tried to negotiate with the man, however matters escalated and he fired at police who returned fire. First aid treatment was given but tragically the man died at the scene," police said.

Police were called to the home with reports of a house on fire and shots being fired.

Three officers were injured in the shootout - including one seriously.

"Two of our officers have moderate injuries and a third officer has been seriously injured.

"All three are in Auckland Hospital in a stable condition receiving treatment. The injuries are not life-threatening."

Start your day in the know

Get the latest headlines straight to your inbox.

Please email me competitions, offers and other updates. You can stop these at any time.

The Independent Police Conduct Authority and Worksafe have been notified.

Armed police had swarmed on the property in Danube Lane this morning as thick black smoke billowed from the house.

Police officers could be heard yelling at a person at the property "drop it, drop it - drop your firearm".

A resident on the street said they could see a body lying on the footpath.

It was covered by what appeared to be a white sheet, the resident told the Herald.

"There's a body covered with a sheet just outside. Two police officers are near it.

"It's on the footpath next to a car."

It is understood two police officers were also injured.

Police are speaking to residents while firefighters are hosing down the remains of the house that caught fire earlier this morning in Danube Lane.

The lane has been cordoned off and armed police continue to patrol the area.

The resident said a police cordon remained at the bottom of Danube Lane shortly before 11am.

She had been preparing to take her children to school when they noticed smoke at a house on the street about 8.21am. She knew the time as she snapped a photo.

"They were armed with shields and guns. It looked like the SWAT."

She confirmed at least two neighbours who attempted to go up to the man after realising his house was on fire quickly backed away from him after he allegedly yelled at them.

Footage captured by a member of the public earlier showed a group of police officers tending to someone - understood to be one of their own - on the ground.

A crowd of emergency service personnel - police and paramedics - eventually pick up the person and carry them to an awaiting ambulance.

Police Minister Poto Williams said her thoughts were with "the officers impacted by the events of this morning".

"I try to call every officer who gets seriously injured on duty. These are not calls I want to have to make." Police have told residents in the street to stay inside. Photo / Dean Purcell

Residents say they heard a volley of gunfire and police have confirmed shots were fired.

It is understood three people have been injured - including at least one police officer.

One person who was bleeding in the face was escorted from the property and treated by waiting ambulance staff.

Armed police surrounded the house in Danube Lane - a witness said they heard officers telling someone to "put it down".

Police confirmed they responded to an incident around 8.17 am this morning involving a "reported house fire with shots being fired". 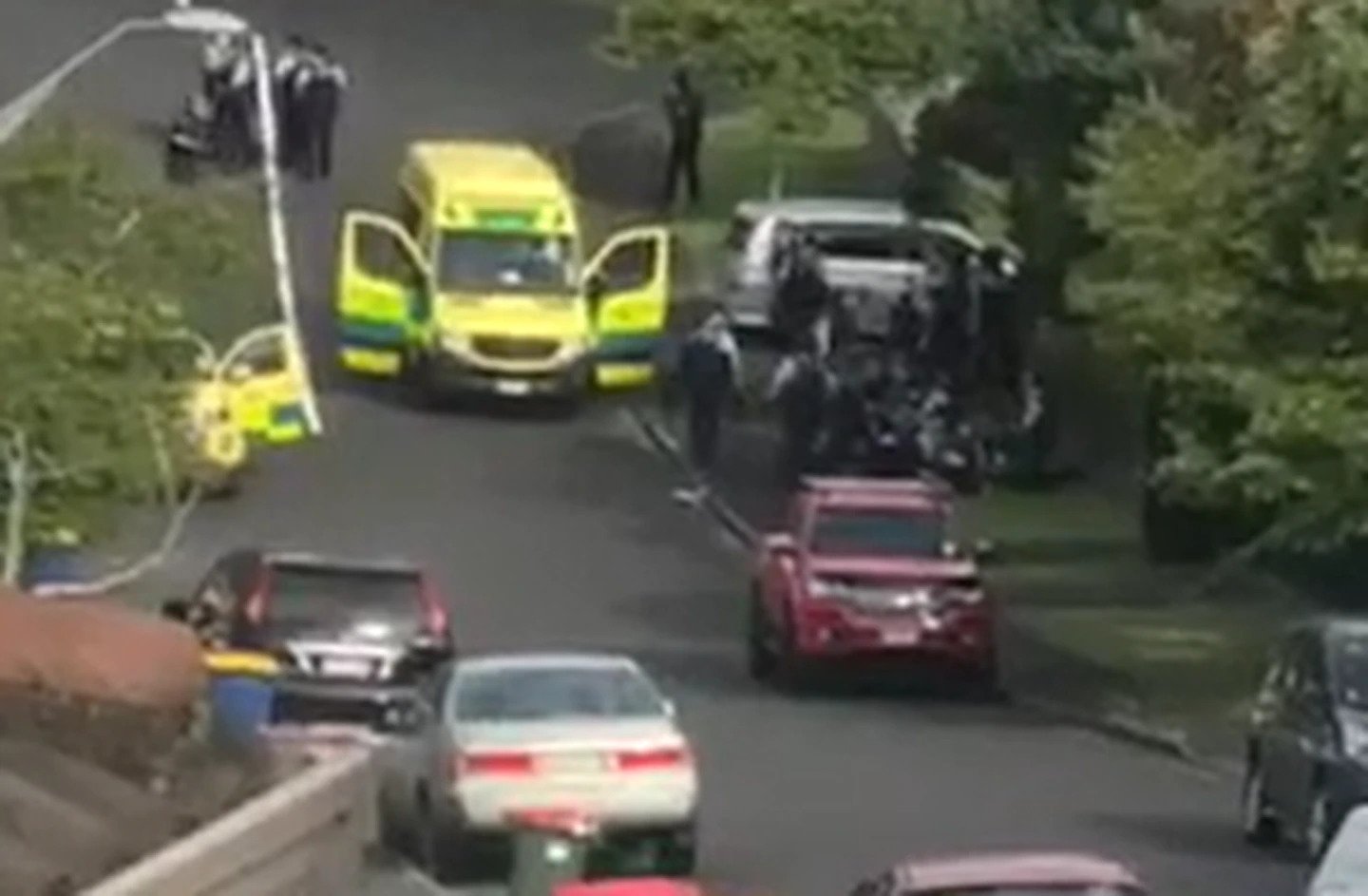 Footage filmed by a neighbour shows a person, believed to be a police officer, being treated by ambulance staff.

"The scene is secure but the incident is still unfolding.

"We will provide more information as soon as it is available."

An eyewitness said they saw armed police surround the property before allowing firefighters on site to put out the blaze. 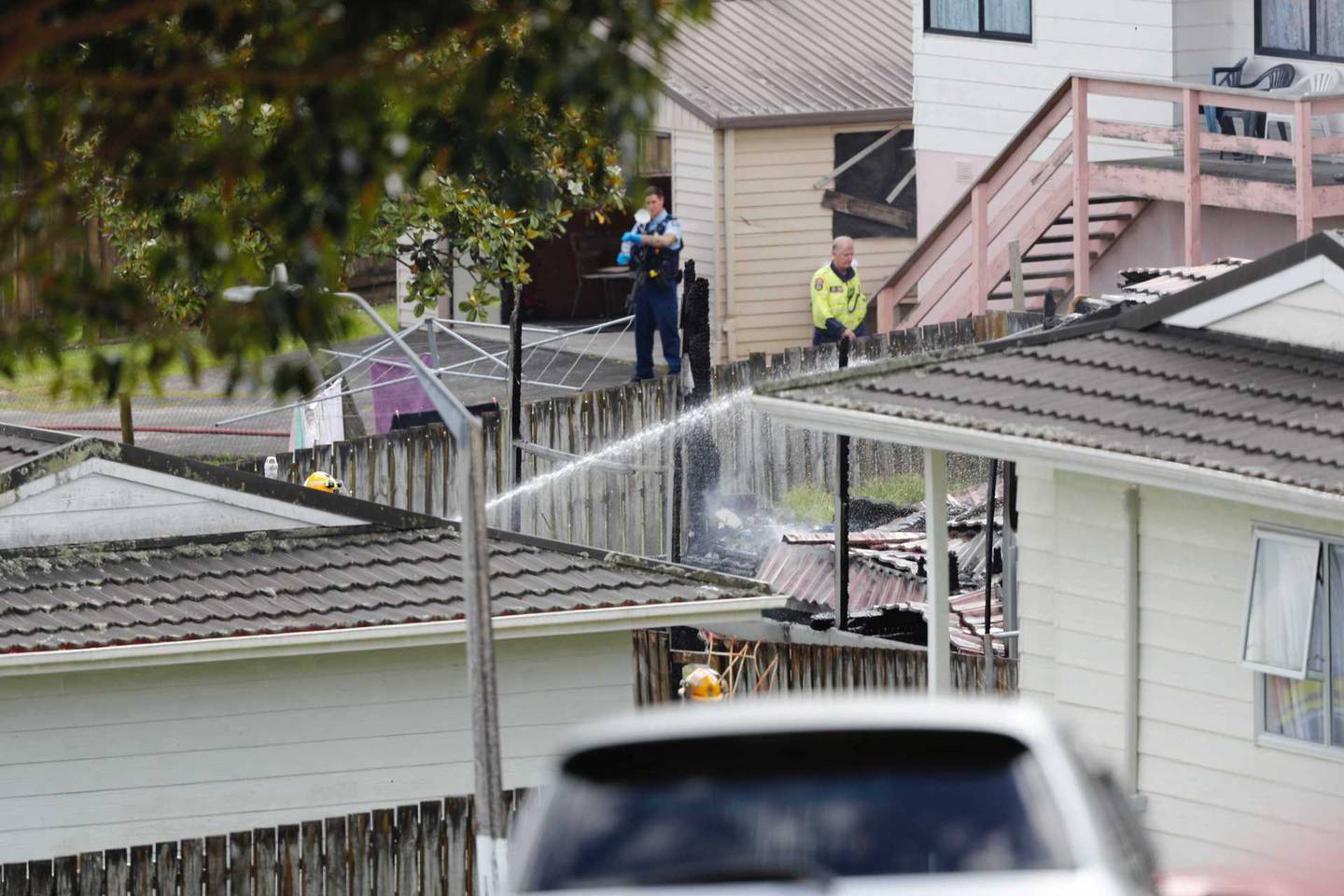 Firefighters dampen down hot spots at the property after this morning's blaze. Photo / Dean Purcell

Shots had been fired and police have entered the driveway of the house they were surrounded.

At least five gunshots were heard.

Residents are being told to stay in their houses.

"Go back inside, go go," a police officer yelled at residents gathered on the street. Armed police surrounded the house in Danube Lane - a witness said they heard officers telling someone to "put it down".

Police confirmed they responded to an incident around 8.17 am this morning involving a "reported house fire with shots being fired".

"The scene is secure but the incident is still unfolding.

"We will provide more information as soon as it is available."

An eyewitness said they saw armed police surround the property before allowing firefighters on site to tackle the blaze.

Residents were told to stay in their houses.

"Go back inside, go, go," a police officer yelled at residents gathered on the street.

Residents were warned to stay inside.

Residents living near the fire reported hearing two loud bangs before the smell of smoke filled the air.

A witness said they heard a loud bang followed by another at about 8.30am.

Northern fire communications shift manager Colin Underdown said the single-storey house was well-involved in fire. He wasn't aware of any injuries relating to the fire at this stage.

Police do not believe anyone is inside the house.

Armed police had blocked off the main road in Glen Eden. Officers have cordoned off Glengarry Rd near the corner of Maywood Cres.

A section of Glengarry Rd, between Solar Rd and Autumn Ave, was closed to the public and reopened about 9.40am.

Plumes of black smoke can be seen across Glen Eden with a residential street cordoned off by police.

GLENGARRY RD, GLEN EDEN - 9:10AM
Due to a police issue a section of Glengarry Rd, between Solar Rd and Autumn Ave, is currently CLOSED in Glen Eden. Please avoid this route or expect diversions and delays in the area. ^TP pic.twitter.com/7rOmWd4YAg