Investigators are trying to determine what provoked a West Auckland man to set fire to his Kainga Ora house then open fire on armed police before he was shot dead.

The dramatic incident, which unfolded in Glen Eden, capped 11 hours of mayhem in which three police officers were also shot and another seriously injured when he was hit by a fleeing car while laying road spikes in New Lynn.

The violence has sparked fresh calls for frontline officers to be routinely armed.

But the country's top cop denies suggestions that police have lost control in West Auckland, and says his officers are focused on protecting the community.

The incidents are the latest in a terrifying spate of violence in recent weeks that have left thousands of West Auckland residents on edge, with one woman telling the Herald "I don't feel safe".

Police Association president Chris Cahill said today that an estimated 80 per cent of frontline cops wanted to be armed.

This was not a situation they wanted, but there were just too many firearms out there in the hands of dangerous people at the moment, he told Newstalk ZB's Mike Hosking.

Police had no idea how many firearms were out there - and there could be hundreds of thousands in the hands of criminals.

"If we start going blasé about firearms in New Zealand, it's a pretty dangerous place we are going to end up," Cahill said.

The courts also needed to start to do their part and send these shooters to jail instead of giving them home detention, he said. Innocent people were getting caught up in this too.

It was not just an Auckland problem, but what had dramatically changed was the number of times those firearms were fired.

"That's what we are seeing right around the country, is people willing to pull the trigger now."

Cahill said the courts had the ability to jail people committing crime with firearms, but they seemed to be finding ways not to do it.

"We have a major gang problem in New Zealand - it has to be tackled on multiple fronts."

Prison was the only place for these serious gang members who were armed up, he said.

"I totally get why we've got young people joining gangs and we've got to address it. But that doesn't mean you ignore those deportees from Australia, those serious gang members that decide to arm up and put other people at risk."

Cahill said firearms prevention orders and asset seizure laws should be legislation introduced to Parliament this week in response to Monday's shooting. Police cordon remained up for most of the day. Photo / Dean Purcell

Auckland councillor Fa'anana Efeso Collins says the ongoing lockdown in the city was resulting in frustrations and issues that have led to violence in some homes.

Speaking about yesterday's incident in Glen Eden, where a man was shot and killed by police and a number of officers injured, he acknowledged that many people were becoming increasingly overwhelmed with issues associated with being in lockdown for so long.

"I think people are really starting to look for ways to vent a deep frustration that they have.

"I think poverty is really connected to these issues here."

When people have nothing to turn to, when there is insecurity about food and housing and where the next meal will come from, it can result to violence, Collins said.

Police are expected to give more details today about the circumstances of the incident as well as more about the man at the centre of the shoot-out yesterday.

Police have not lost control: PM

Prime Minister Jacinda Ardern yesterday said she had not been briefed on the shooting but planned to speak to Police Minister Poto Williams.

She did not believe police had lost control of law and order in Auckland and said police had been working to get weapons out of the hands of criminals and clamp down on firearms "designed to cause mass devastation".

"We have taken direct action to try and reduce the access and nature of firearms that are being accessed in the wider community," Ardern said.

"You'll see that we've moved on licencing, we've removed those weapons that are military-style.

"The efforts of police have also been very focused on the seizure of both firearms and criminal assets."

Police Commissioner Andrew Coster told media four officers were recovering in hospital as a result of the Glen Eden and New Lynn incidents, two with serious injuries but not life-threatening.

"It's the worst thing you can have in my position. When I heard multiple officers had been shot, my heart sank." 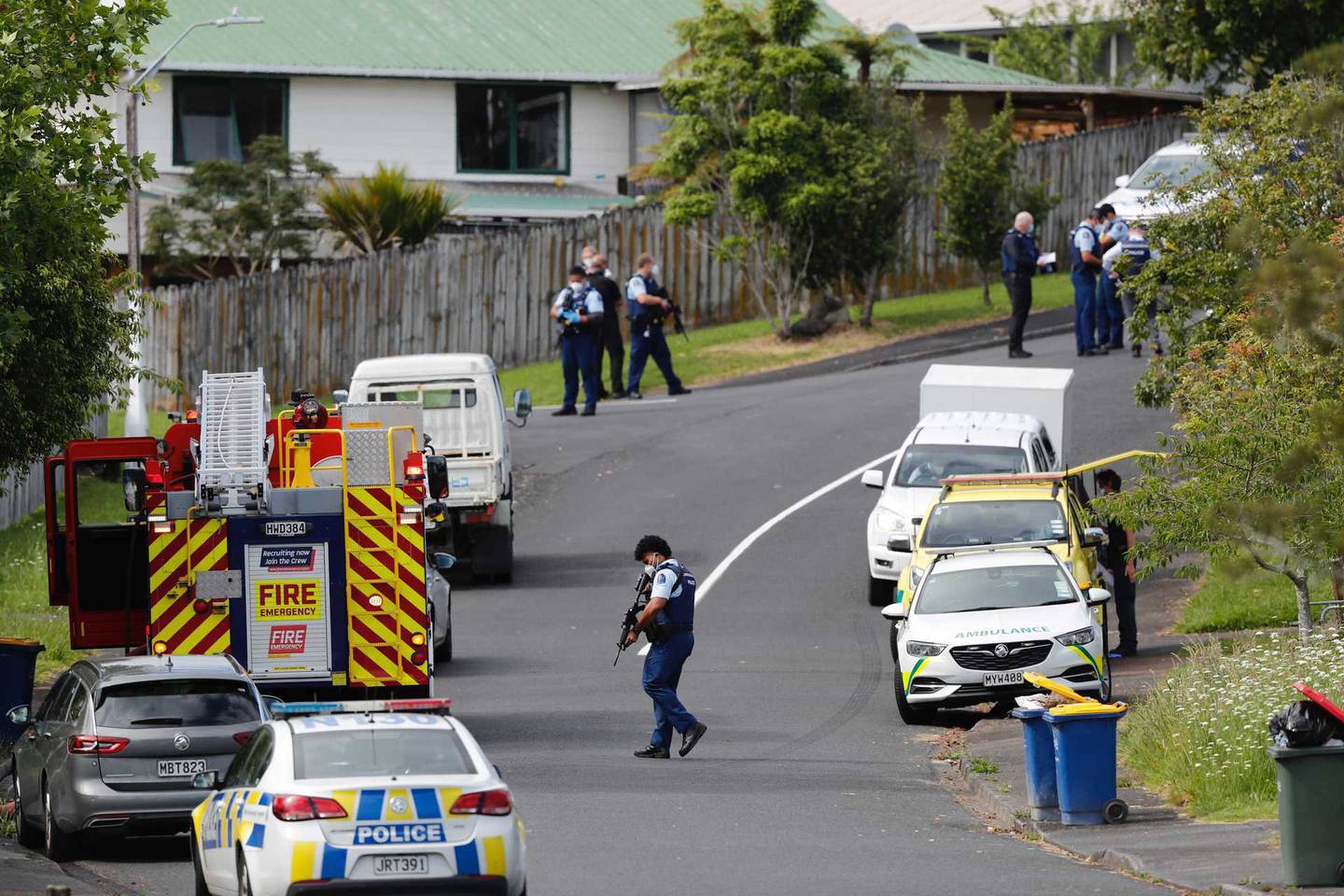 Coster said police were called to a Glen Eden address at Danube Place just after 8am after reports of a house fire and a man discharging a firearm.

They tried to engage the man to disarm but over 30 minutes of negotiating he became increasingly agitated and aggressive.

Coster said the residents of neighbouring properties were evacuated and a police dog and "distraction devices" were also deployed.

"The situation escalated further when the man fired at police and officers returned fire, incapacitating him," Coster said.

"Our staff delivered first aid to the man but, tragically, he died at the scene. Our people come to work every day to keep people safe and this is the last thing we want."

Police are yet to formally identify the dead man.

A neighbour, who gave her name as Elina, said she no longer felt safe.

The mother-of-two said she didn't know who the man was but was told by police he was 53 years old.

She said it appeared that neighbours had approached the house while it was on fire before "scrambling back", which she suspected was as a result of the man's actions.

"It was really terrible."

Elina said the incident had added to her growing sense of unease due to increasing West Auckland violence.

Elina said she would be keeping both her children home from school this week following the shooting.

Another neighbour described the shootout as shocking, saying there had been no previous issues with the man.

The woman, who did not want to be named, told the Herald the man had lived alone at the state house for several years.

There had been no previous issues with him but she said he had mentioned to her that he'd "got into a bit of trouble with some people recently".

Police now have commenced a critical incident investigation, and the Independent Police Conduct Authority and WorkSafe have been notified as is standard practice.

Police Minister Poto Williams said her thoughts were with "the officers impacted by the events of this morning".

"I try to call every officer who gets seriously injured on duty. These are not calls I want to have to make."

The shooting has sparked fresh calls from the police union for frontline officers to be routinely armed.

Police Association vice-president Mike McRandle said the officers who attended the shooting attempted to resolve it calmly, but matters escalated to the point where they had to respond.

"It is dreadful that a person has died, and also it is an enormous strain on the officers put in a position of having to return fire," McRandle said.

"Using lethal force is the most difficult decision for a police officer and has long-lasting ramifications."

McRandle said the shooting was yet another example of the "terrible consequences" of the proliferation of easily accessible firearms throughout New Zealand communities.

He cited a Herald report highlighting the 900 firearms incidents already reported across the nation this year.

Police were responding daily to gun violence, armed robberies, carjackings and inter-gang warfare with firearms involved, and police officers were also being shot at.

"We are witnessing a policing environment that is progressively more dangerous. It is no surprise to the association that the majority of its constabulary members believe they need to be armed."

Auckland Mayor Phil Goff said increasing gun violence in Auckland was causing real concern in the community, particularly in the south and the west.

Many of the shootings were gang-related, with lives "deliberately and recklessly" put at risk through these criminal activities. 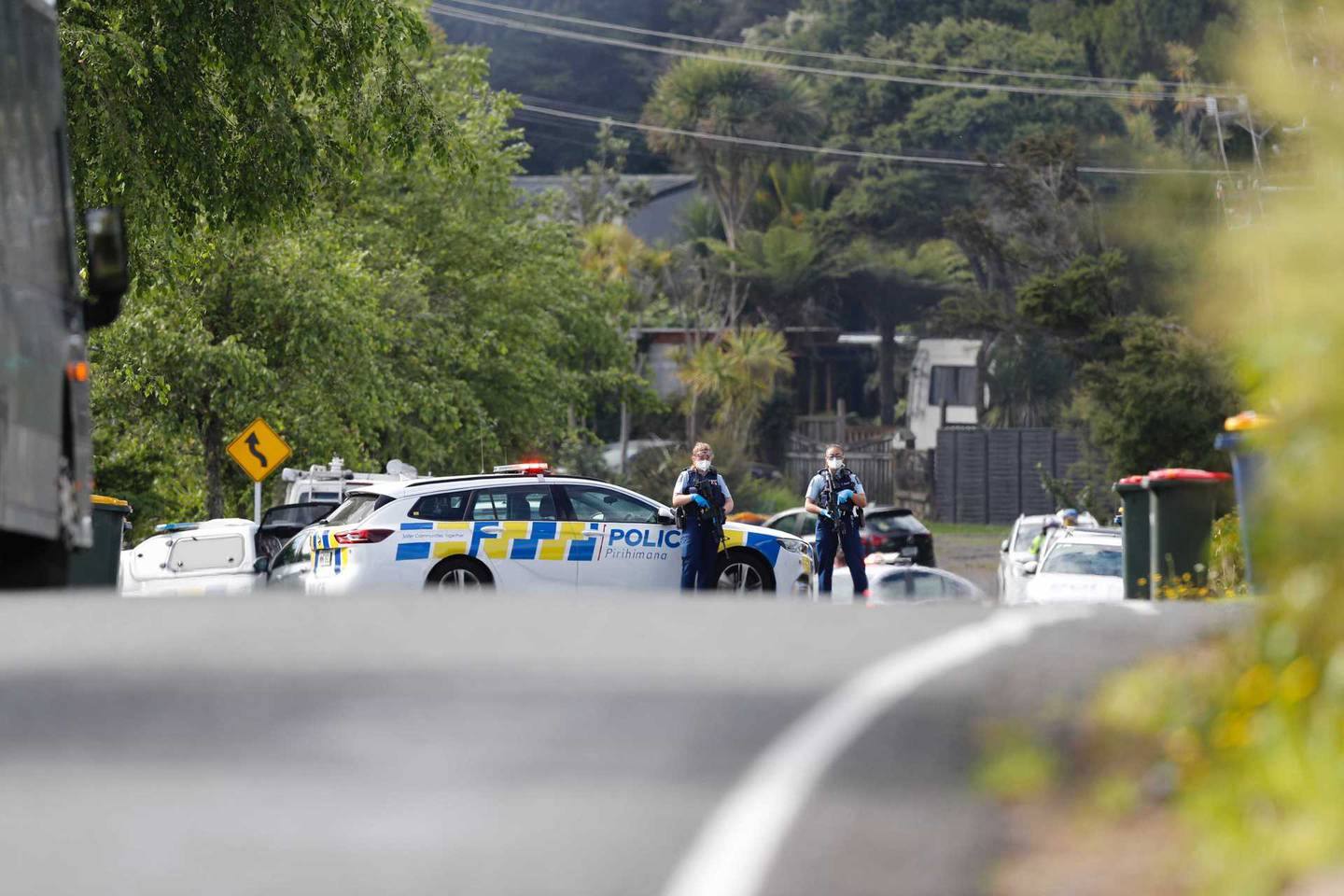 "Our thoughts are with the three officers injured in Glen Eden...we wish them a fast recovery and thank the police force for putting themselves at risk to protect the community, and for the courage and professionalism they show in carrying out their duties," Goff said.

"I have been in contact with the Minister of Police and Auckland's District Commanders to express my concerns, especially around gun violence and gang-related crime."

At one point, officers could be seen rushing towards the property before taking cover behind police vehicles and a small truck parked on the road.

Another video showed several police officers - armed with rifles pointed at the house - lining up behind each other before moving in.

Multiple shots could be heard at times, a dog barking and yelling from police for residents to get inside, as well as to the man at the centre of the incident.

There has been a lot of debate since Constable Matthew Hunt died last year about whether police officers should be armed.

Williams has been opposed to the general arming of police, saying it was a stance based on feedback she had received from Māori, Pasifika and South Auckland communities.

Coster has also dismissed the calls for all frontline officers to be armed.

Instead, in September, he announced a new tactical response team in response to increasing violence against officers.

More police will have armed offender squad training as part of a $45 million Government investment in frontline officers' safety.

MP for Kelston Carmel Sepuloni said her thoughts were with all of the people injured in Glen Eden and the wider community, who are "understandably feeling shaken".