A woman accused of murdering Dimetrius Pairama told police she loved the Auckland teenager and tried to save her.

Pairama's body was found in a steel drum at an abandoned state house in Māngere last July.

Toko (Ashley) Shane Winter and Kerry Te Amo are on trial in the High Court at Auckland this month accused of torturing and murdering the 17-year-old.

Winter pleaded guilty to kidnapping the teenager at the start of the trial while Mr Te Amo denies this charge.

The jury have now seen a number of police interviews with Winter conducted in the days following Pairama's death.

In the first, the 29-year-old weeps and vomits as she tells Detective Samuel Hensman how Te Amo beat, stripped, gagged and tortured the teenager.

"I was too scared to do anything and all I could do is watch her get tortured, burnt, broken ribs, broken jaw then I could see the hurt in her. 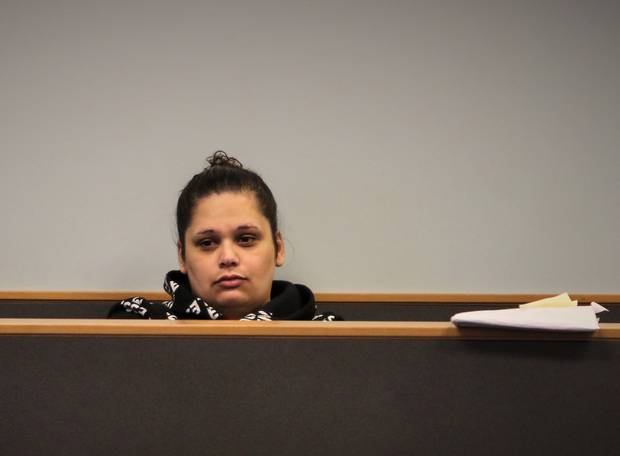 Ashley Winter, aka Toko Shane Rei Winter, in the Auckland High Court on trial for the murder of 17-year-old Demetrius Pairama. Photo / File

"All I wanted to do was grab her and hug her, just tell her how sorry, I was sorry they were doing this, wish I could help but I can't."

Winter described Pairama as her "best friend" and said she had known her for years but couldn't tell police her name; saying she knew her as "sis".

The interview was repeatedly interrupted by Winter dry retching and at times vomiting as she cried and talked in the interview room.

"I feel mentally disturbed seeing what happened to my friend, actually my sister, and right now it's making me feel sick seeing my own best friend get [killed]."

She said Te Amo kicked a chair out from under Pairama and later put her body in a plastic bag and into a steel drum in the backyard.

"I tried to save her but they wouldn't let me. If they weren't there, I could've cut her down. Shit her whole body was twitching and her eyes went to the back of her head then she stopped breathing."

Hensman was today asked if inter's demeanour had changed in the interview; he confirmed it had and she hadn't showed signs of nausea. Dimetrius Pairama was found dead in a property in Mangere. Photo / Supplied

One of Winter's lawyers Annabel Cresswell asked the detective if he had referred Winter to mental health services, given she was showing signs of distress.

Hensman accepted the 29-year-old was unwell and extremely upset but said she would have undergone a medical assessment afterwards.

After an emotional first interview, Winter later changed her story; admitting she had beaten and tied up the teenager to Detective Michael Metcalf.

She told him she punched and slapped Pairama because she blamed her for a past assault and had heard the teenager was spreading rumours.

Each of Winter's statements directly contradict those of the Crown's key witness who has described Winter as the ringleader of the group.

The teenager, who cannot be identified, has been granted immunity from prosecution in exchange for giving evidence in court.

She told the jury Winter orchestrated Pairama's death; right down to giving her a choice of how she wanted to die, by stabbing or hanging.

Winter sat with a hood pulled over her head, barely visible in the dock, while the police interviews were played in court.

The trial before Justice Brewer and a jury is set down for the month.