A wealthy businessman is offering a hefty reward of $500,000 in return for a stolen safe containing $4 million in cryptocurrency.

Mark Geor, previously told the Weekend Herald his family home in the Auckland suburb of Westmere was burgled while it was being renovated.

He said the thieves took an extraordinary haul including $10,000 in cash, Rolex and Tag Hauer watches, diamond jewellery and family heirlooms.

"This burglary was executed with surgical precision. Someone has done their homework; they knew exactly where the security cameras are and where the safe was. But they won't have any idea of what's inside the safe," Geor said.

Campbell told the Weekend Herald; the substantial reward was an appeal to the culprits to return all the contents from the safe.

"We've been down a couple of paths but they've fizzled out. One of the dangers of this you get people ringing up who are economical with the truth which is all part of the process. We believe the cryptocurrency hasn't been touched yet and nobody has come forward about the safe being blown up. The feeling is, talking to the odd criminal, the safe is sitting around somewhere. Someone out there knows something," Campbell said. 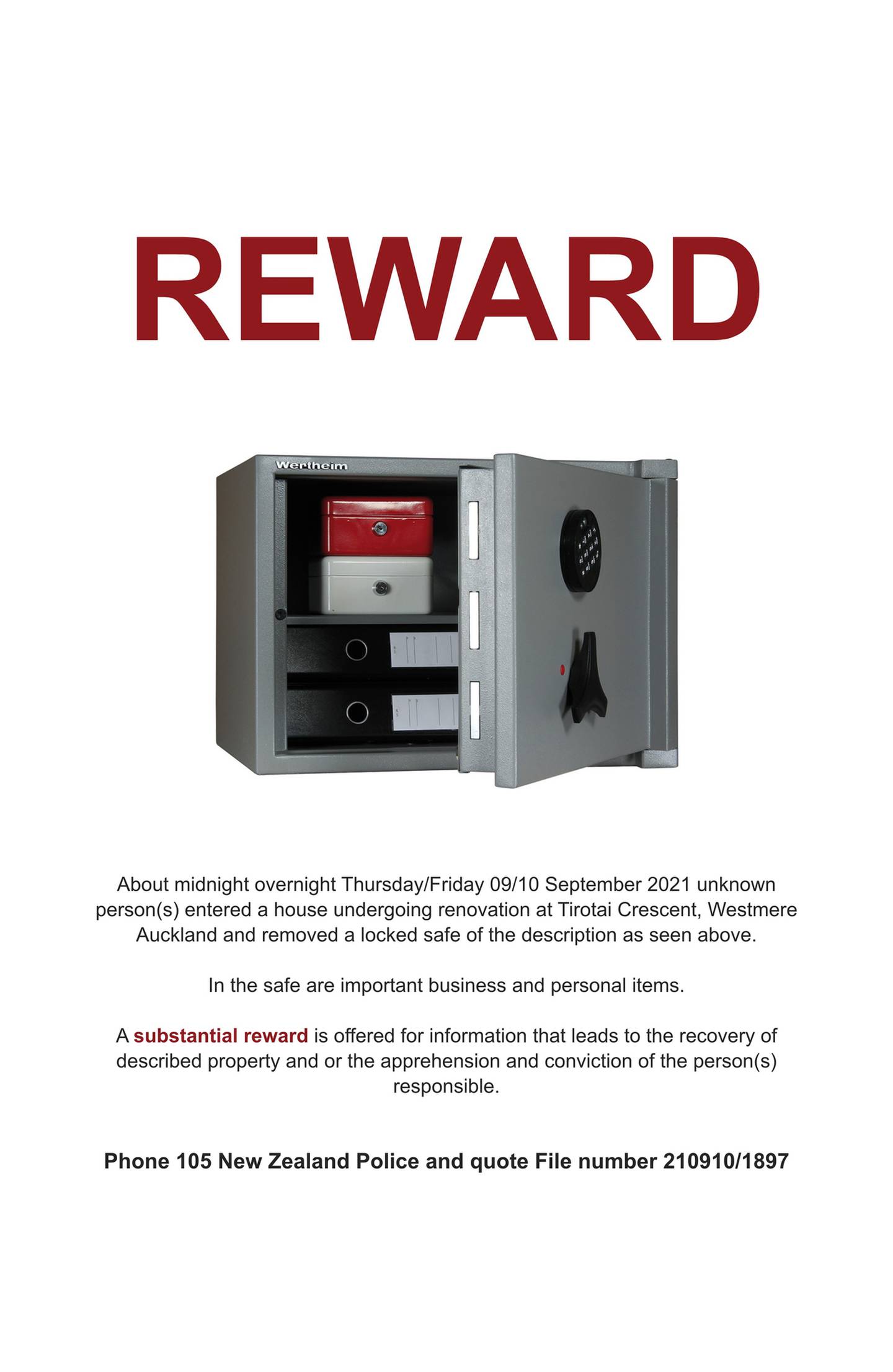 Reward poster for Mark and Clare Geor. Their house was burgled in Westmere and $4 million dollars of crypto currency was stolen in a safe. (Photo / Supplied)

He said CCTV footage from a neighbour's security cameras revealed possible suspects driving a white Subaru Legacy wagon and a 2005 Toyota Ute with a hood on the back between 9pm and 9.30pm.

One neighbour noticed a potential suspect in the neighbourhood two days before the burglary.

"The safe was bolted to the concrete floor and weighs about 160 kilos so you'd need a big strong person to cut it away and shift it out of the cupboard in the stairwell," Campbell said.

"They had to drag it across the room and put it in a wheelbarrow to take it to the front of the house and have a vehicle big enough to carry the safe."

It is the first cryptocurrency theft Campbell has been involved in the 40 years he's been a private investigator.

On September 10 when Geor went to collect the mail, he noticed a builder's wheelbarrow with a pillow on it.

He discovered the house had been broken into and burglars had entered through a side door, where there were no security cameras.

"They turned off the power and disarmed my alarm and backup battery. The electrical switchboard, control box for the alarm was in the same room as the safe. If you set the alarm there is a wee delay before it goes off, it looks like they were able to shut it off pretty quickly, so they knew what they were doing," Geor said.

Campbell told the Weekend Herald rewards can be helpful in solving crimes.

"Burglars often get rid of stuff pretty quickly or they hang on to it until things cool down. Rewards are generally associated with the value of the information. In this case, it's the data that relates to the cryptocurrency," Campbell said.

A police spokesperson said, "The matter is still being actively investigated so we can't comment further at this stage."

Although there is no evidence the safe has been cracked open or funds have been withdrawn, Geor can't claim insurance for the cryptocurrency he has lost.

"Unfortunately, there is no such thing as insurance."

Geor's message to the raiders in September was simply "GIVE IT BACK."

"I am gutted, despite the money, I feel stupid for having all my possessions in there. There is nothing fair or reasonable about this, I just want my stuff."