Police warn they will be taking prosecution action against organisers of yesterday's anti-lockdown protests "in the coming days", but have not yet made any arrests.

About 2000 people congregated in Auckland Domain and about 1000 at Kensington Park in Whangārei protesting the Government's alert level restrictions and response to the Delta community outbreak.

"While those in attendance generally conducted themselves in a calm manner and adhered to rules around mask wearing and distancing between smaller separate bubbles, the gathering was by its very nature a significant breach of Covid-19 alert level 3 requirements," Superintendent Shanan Gray said.

"Police confirm that they will be taking prosecution action against a number of individual organisers in the coming days."

But the University of Otago epidemiologist did say Covid transmission was likely occurring at them, and symbolically the protests were a corrosive form of "antisocial behaviour".

"I don't always throw the super-spreading label around. It's mainly related to indoor events just because of how the virus goes," Baker said.

"Super-spreading usually requires an indoor environment where you have a single person who can fire out aerosols and affect a lot of people around them and we've seen that in Auckland obviously with the Samoan Assembly of God event." 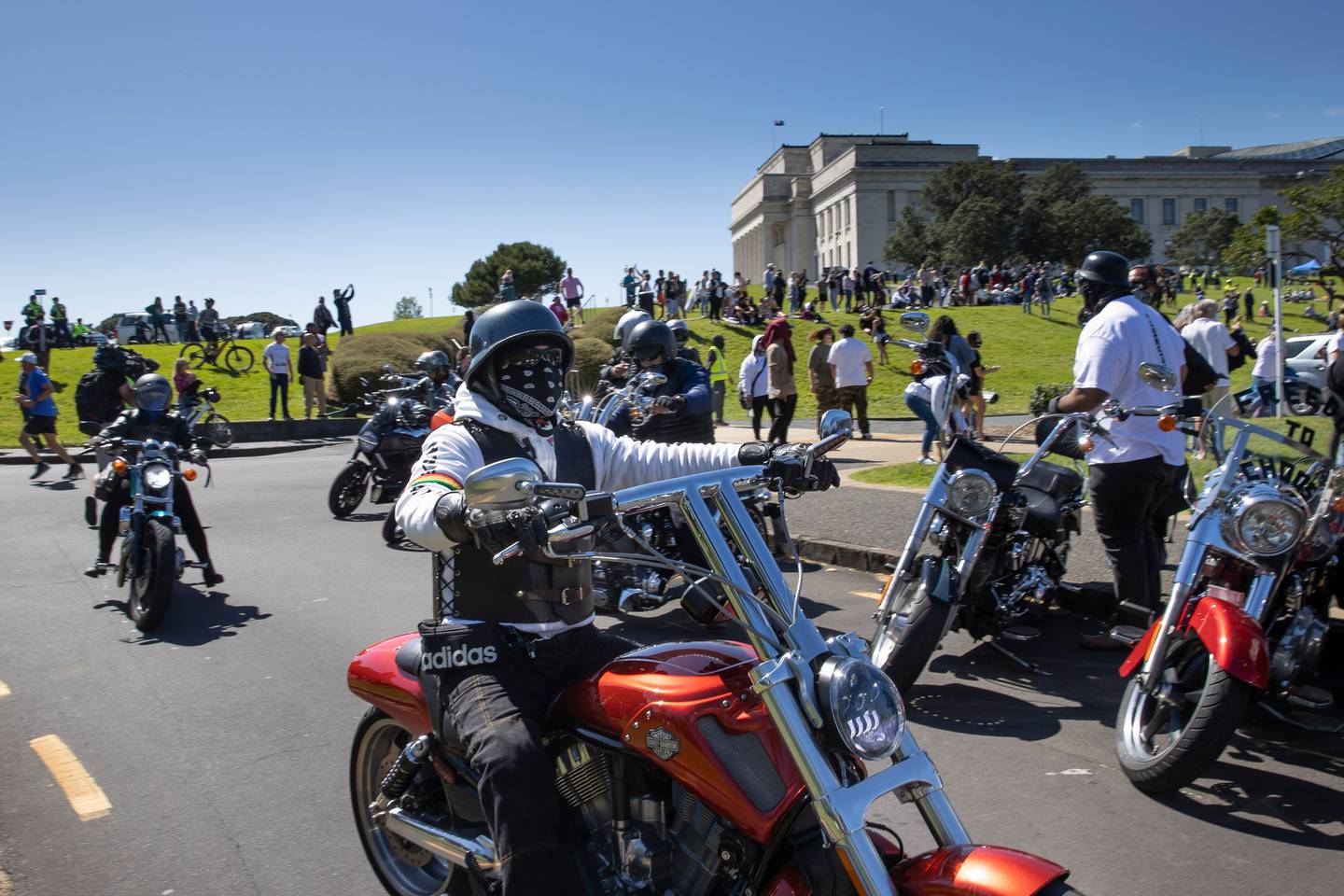 But Baker said the unchecked mingling and shouting at Auckland Domain today and in Kensington Park, Whangārei, where 1000 people gathered, made some form of Covid-19 transmission likely.

Police were seen in high numbers at the Auckland Domain protest, some taking pictures with long lens cameras, and have announced they plan to prosecute numerous organisers of the event.

"It certainly has good potential to result in transmission of the virus because obviously there's mixing at the event, people are going out of their bubbles," Baker said. "The only thing that lessens the risk of this being a super-spreading episode is the fact that it's outdoors. But against it, of course, is that there isn't physical distancing almost by definition.

"People aren't uniformly wearing masks despite assurances that people would, from Brian Tamaki in the past.

There may even be socialising before and after. 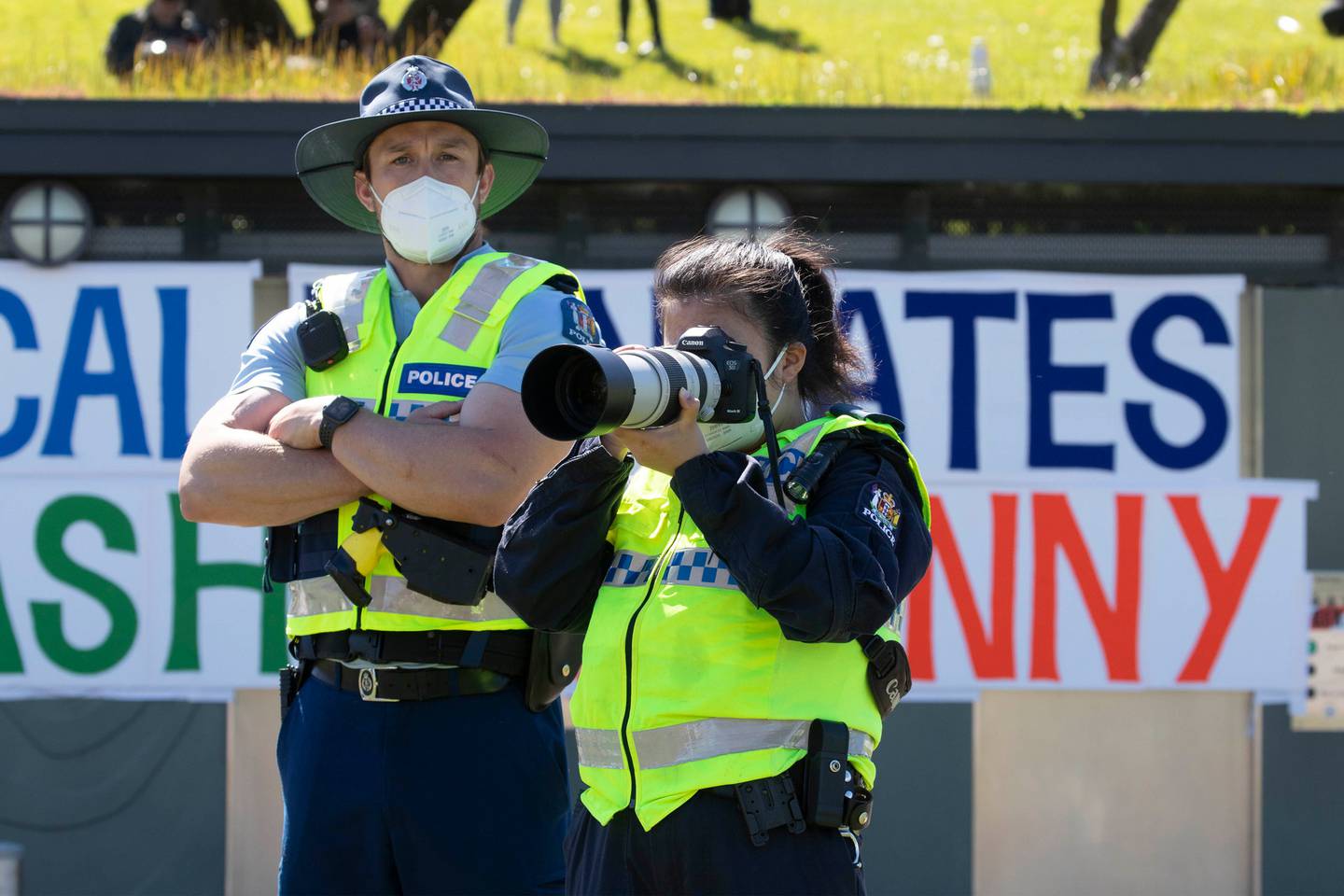 "The other fact is that people often will be doing a lot of shouting which means if there is an infected person there, they can fire out a lot more viral particles."

The protest comes on the same day as the Government is making its vaccine push in the national Super Saturday campaign. 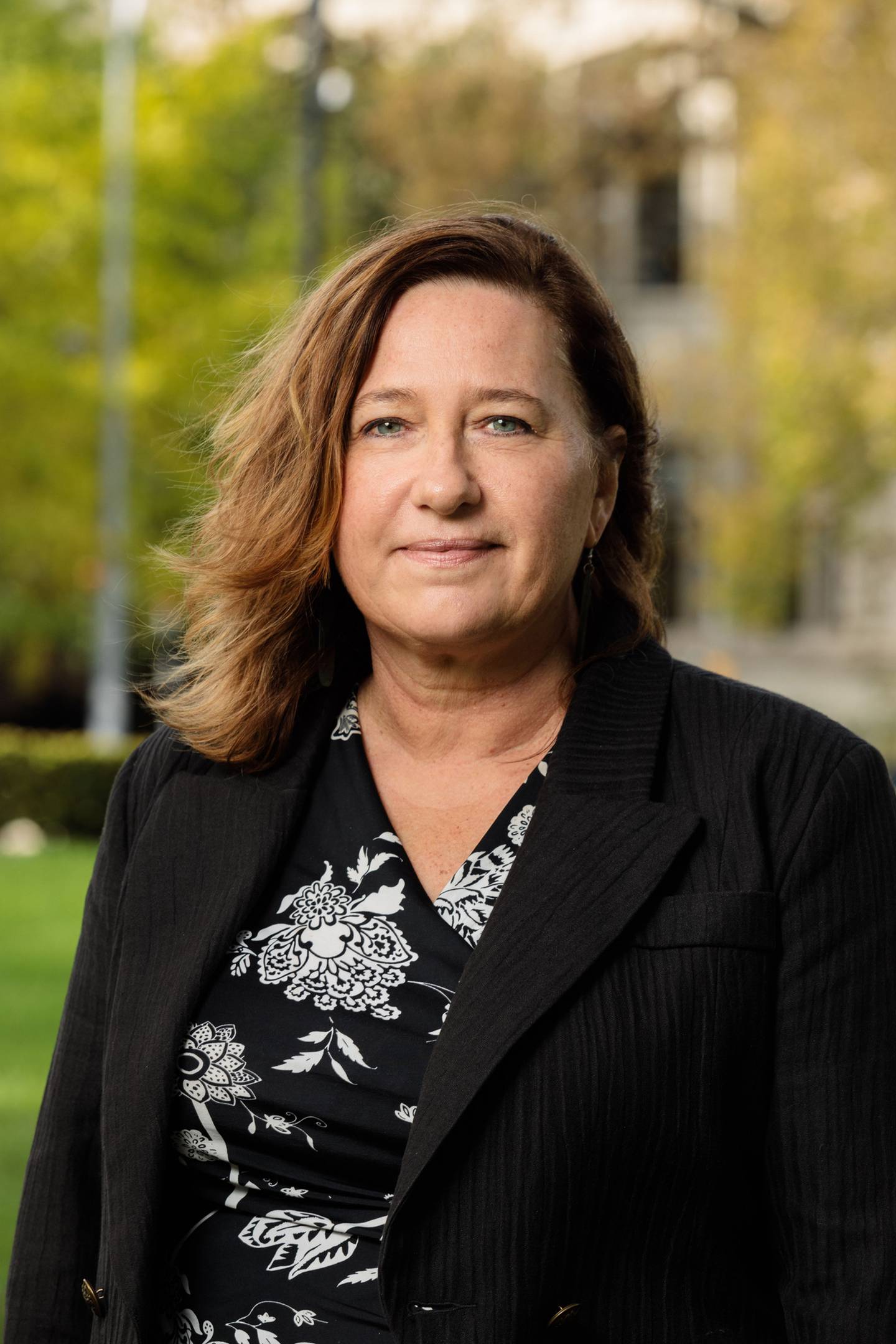 "You only need one person to spread it to a few others and those people go back into their communities and ongoing transmission will occur," Petousis-Harris said.

"I'm just assuming generally that these people are representative of communities where there's very low vaccine uptake. Therefore the potential to further spread among these communities is higher. They are a self-selecting group.

"One could assume that if some infected people rock up, that the potential for spread is very high. 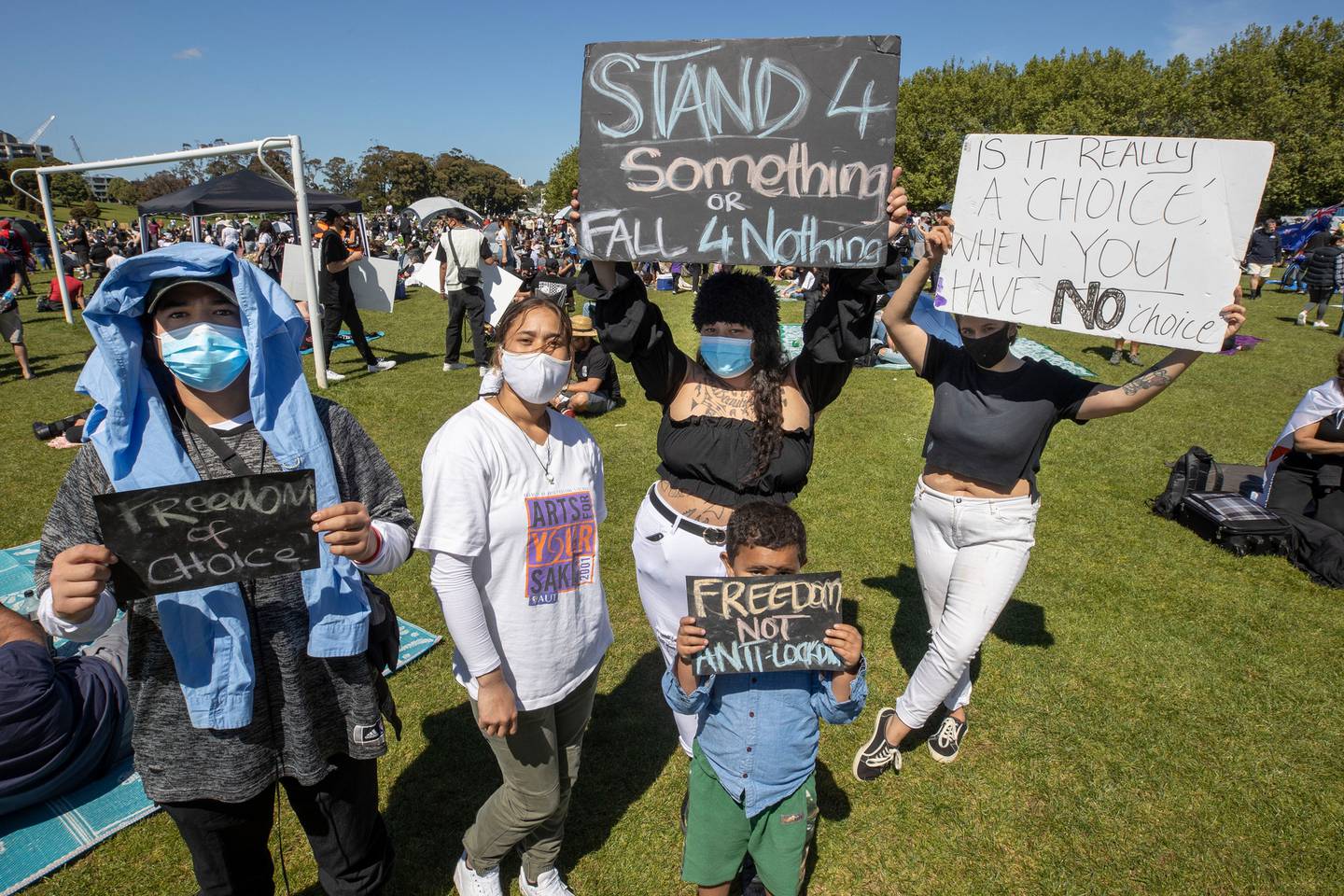 "It's important to say it's [the spread risk] much lower outside. It does depend on those weather conditions as well. They're a real bunch of party poopers really. It's just so unfair on everybody else."

Baker echoed that the symbolic message of the FreedomNZ protests - which again featured a speech by Destiny Church leader Brian Tamaki in Auckland - was damaging to social unity in abiding by lockdown restrictions.

"My concern is by flouting the rules in such a dramatic way, it's going to weaken the resolve of people in Auckland to say 'I'm sticking with the rules and these people are getting away with flouting the rules'. I would call it a form of antisocial behaviour," Baker said. 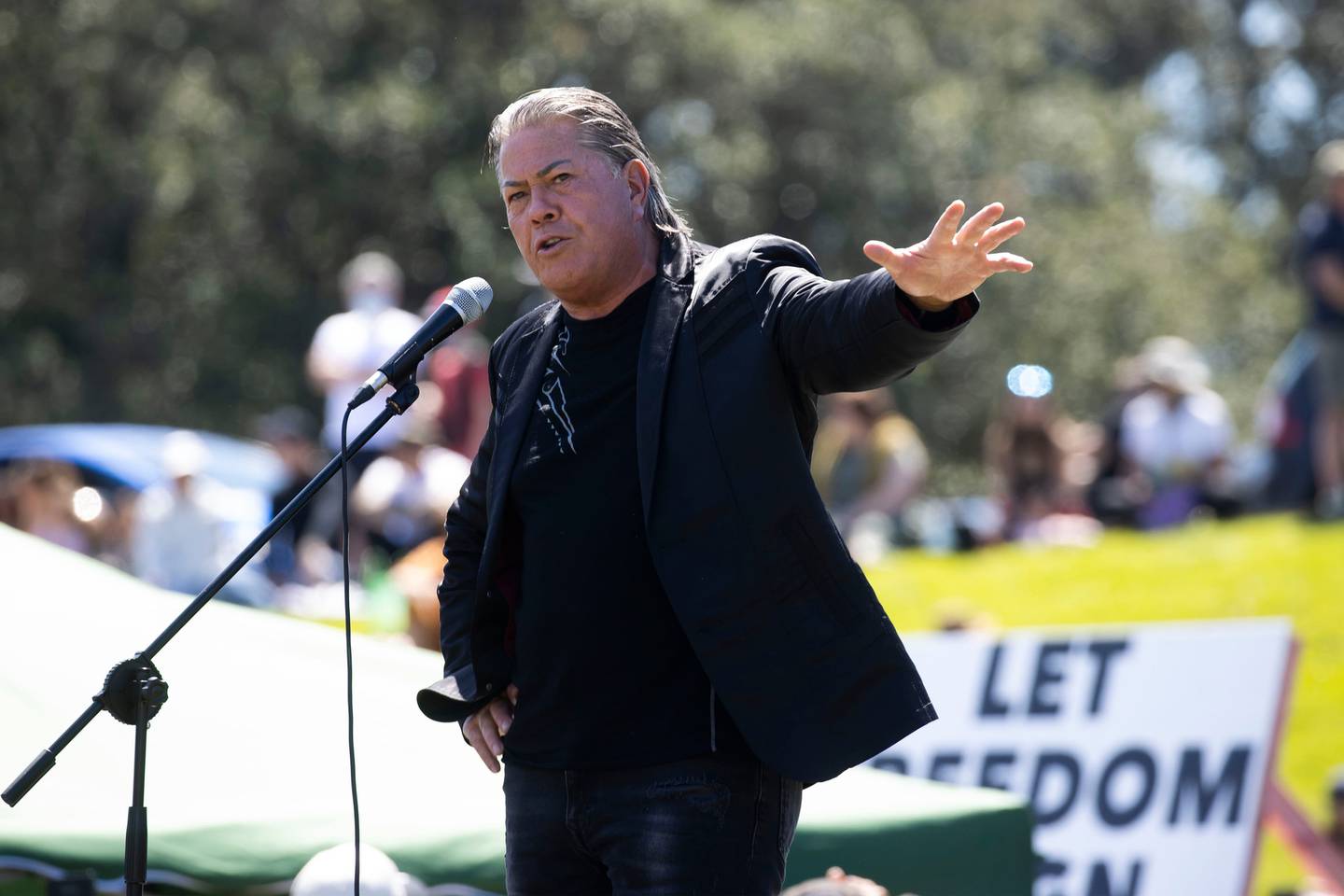 "It's quite insulting to people in Auckland and elsewhere who are doing the right thing to protect others around them. That communal effort."

The University of Otago professor said, ironically, if you take the Covid mortality rates of other countries like the US and UK, many of the 2000-odd people at Auckland Domain today wouldn't have been alive if not for the restrictions they were protesting against.

"If we had the mortality experience of the UK and US it would have meant four of those people [protesting at the Domain] would not be alive today," Baker said.

"Their mortality's been about 2000 per million. Ours has been five per million. So the lowest in the OECD. And a lot more than that would have gone to hospital and would be suffering from chronic effects of long Covid." 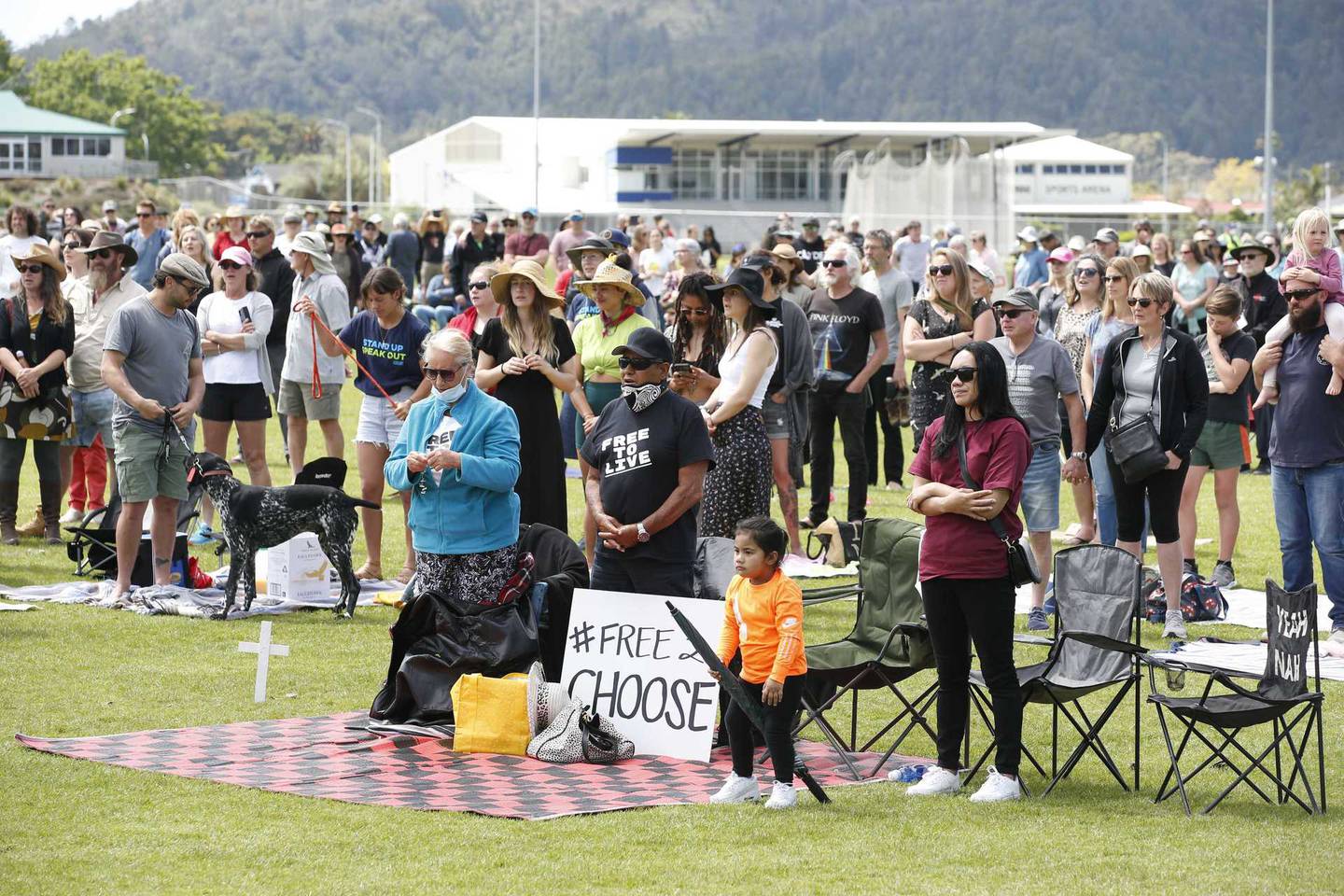 Over 1000 people at Kensington Park Whangarei in the FreedomNZ protest on October 16, 2021. Photo / Mike Cunningham

Baker said the protests were "insulting" to the people of Auckland and their "communal effort" to protect others around them through vaccination.

He also said they were absurdly illogical.

"They're promoting a whole lot of oppositional ideas that collective action doesn't work, that the virus is nothing to worry about. But also that the vaccines 'don't' work," Baker said.

"Actually the vaccine is the thing that will get them out of lockdown. So this is the absurdity of the messages they're portraying. It isn't intelligent or cohesive, it's just a contrarian message and when you actually look at it it's absurd."

However, despite the scattered protests across New Zealand, the Government's Super Saturday vaccine push campaign was a huge success, with more than 127,000 jabs administered as of 6:30pm.