During Brian Tamaki's first court appearance on Tuesday on charges he illegally attended and helped organise a crowded lockdown protest at Auckland Domain earlier this month, the judge allowed the controversial church leader to remain free on bail on several conditions.

One condition was that Tamaki and co-defendant Paul Craig Thompson not "organise or attend any protests in breach of any Covid-19 level requirement", while another was that they not "use the internet for the purpose of organising, attending or encouraging non-compliance with the Covid-19 Public Health Response Act 2020".

But within hours of the hearing, the Destiny Church founder issued a statement on social media that appeared to push the boundaries of what is allowed - promoting a follow-up protest at the same spot this coming weekend.

"Our Prime Minister has told us it's safe to picnic, therefore I will be attending a picnic with my family at the Auckland Domain on this same Saturday with my bubble, adhering to the current Covid-19 restrictions, wearing my mask, but also at the same time exercising my right to peacefully protest," he said. "I am not organising this Families Freedom picnic, I will leave that to The Freedoms & Rights Coalition team who are quite capable." 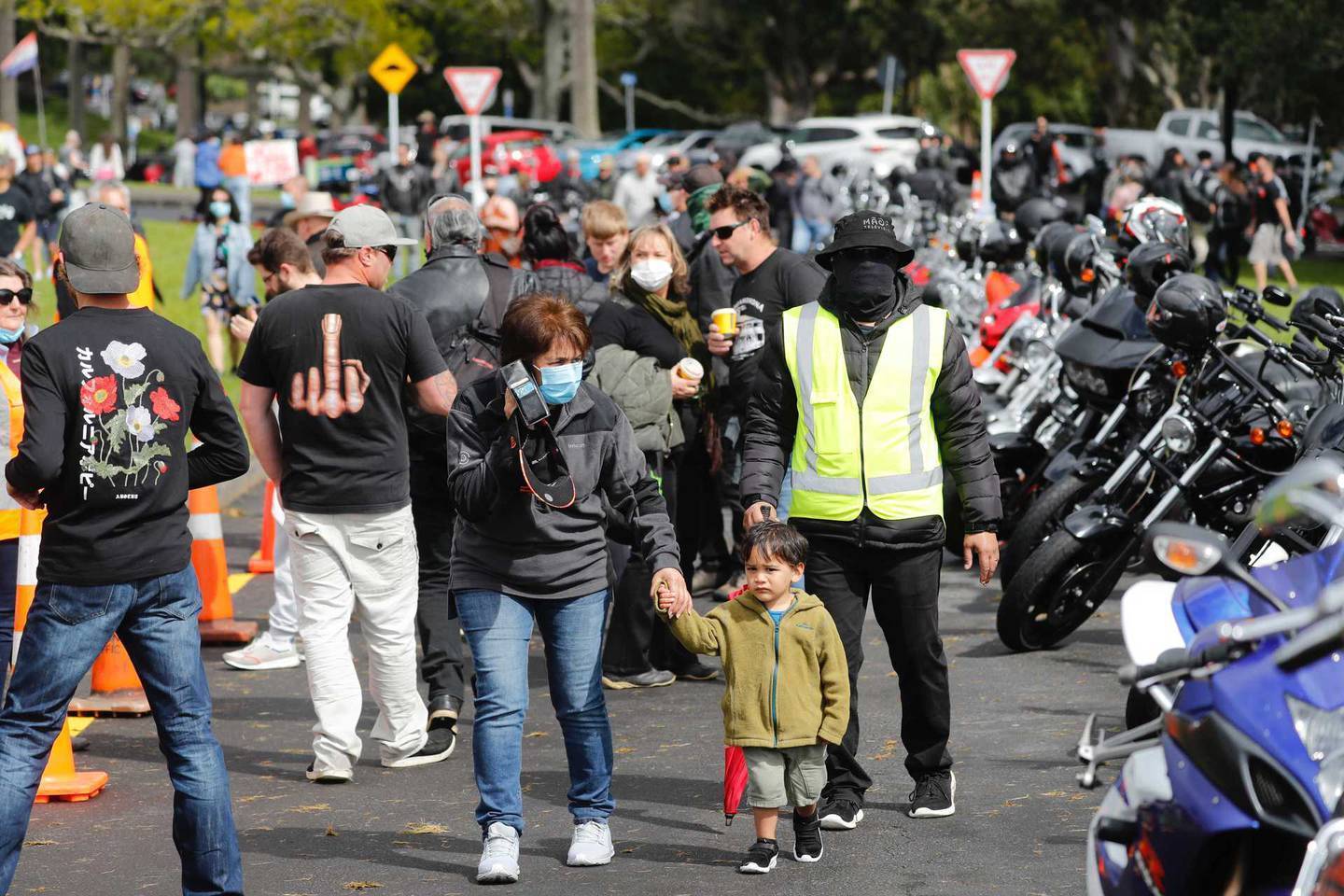 During the Auckland District Court hearing - which Tamaki, 63, and fellow Destiny Church member Thompson, 57, attended via audio-video link due to the courthouse's pandemic precautions - both men pleaded not guilty to the charges.

If convicted, they could each face up to six months' prison and a fine of up to $4000.

In his statement after the hearing court, Tamaki said he believes Judge Brooke Gibson "agreed that we have a right to protest as long as we do not breach current Covid-19 alert level restrictions".

Most of the roughly 30-minute hearing cannot be reported due to suppression requirements of the Bail Act, but the judge did briefly mention the defence perspective in open court - without taking sides. 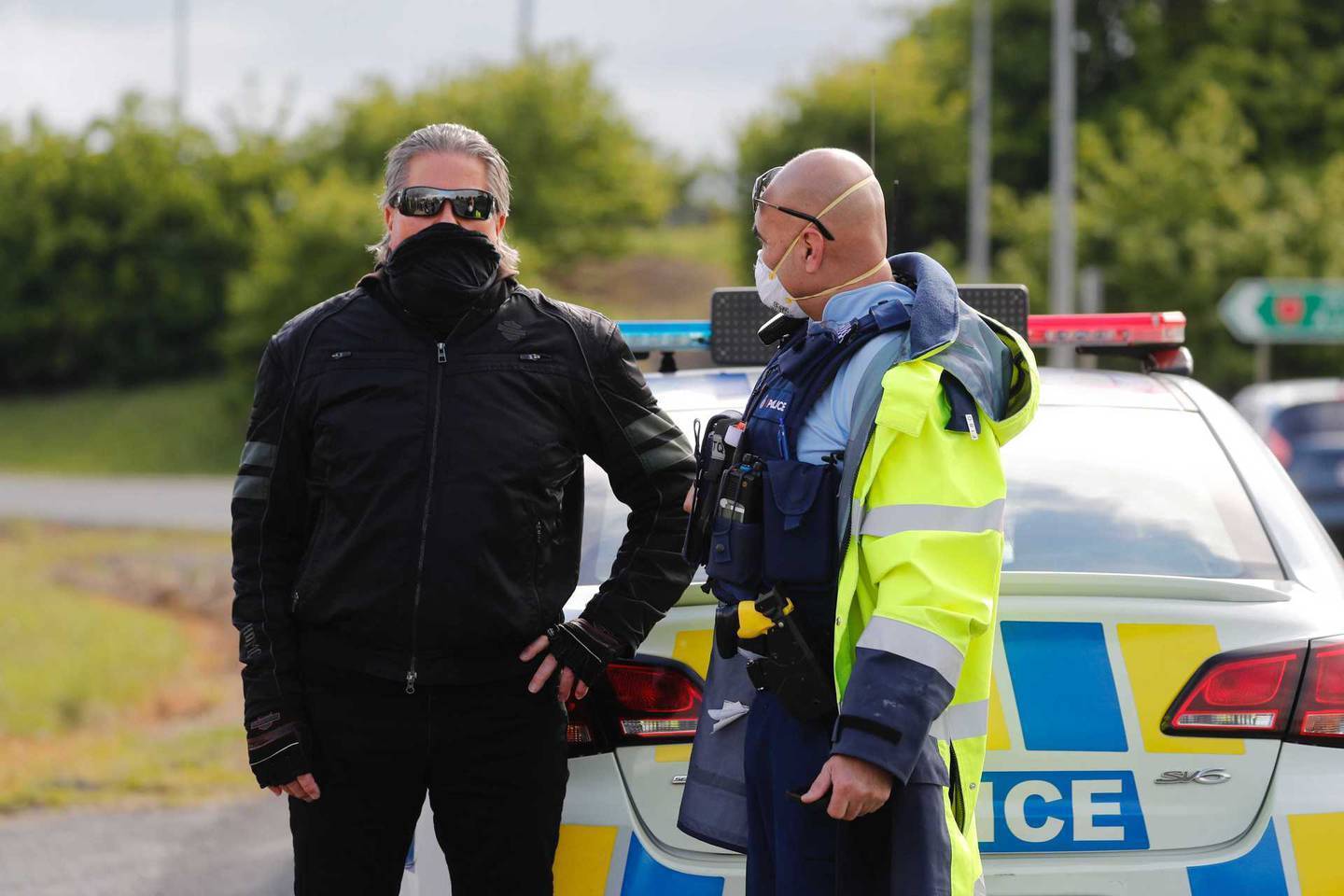 "The defence is that the gathering organised at the outdoor place was permitted within the current Covid-19 alert level requirements...and accordingly the matter will have to proceed to a judge-alone trial in that respect," Judge Gibson said.

It has been estimated between 1000 and 2000 people gathered at Auckland Domain on October 2 - despite pleas from Government and city officials to call it off and avoid what was feared could become a super-spreader event.

Under alert level 3 restrictions at the time of the previous event, most non-essential gatherings that involved the mixing of bubbles were banned. Weddings and funerals were notable exceptions to the rule, but for groups of no more than 10 people.

Level 3 lockdown rules have since eased in Auckland to allow for two families at a time to mix bubbles for outdoor meet-ups, but with continued social distancing and no more than 10 people per gathering.

Tamaki met with police before the previous protest. A police spokesperson said after the event took place that they were disappointed by the large numbers, and that "organisers did not follow through on undertakings they had given police about how the event would be managed".

Prime Minister Jacinda Ardern had characterised the event as a "slap in the face" for all Aucklanders who had been following lockdown rules, while Auckland Mayor Phil Goff characterised the gathering as a "kick in the guts".

Over 150,000 people signed an online petition calling for the church leader to be charged.

Tamaki was represented during his brief court appearance by Ron Mansfield, QC. Thompson - listed online as an official with the Freedoms and Rights Coalition, which has taken credit for the protests - was represented by lawyer Sue Grey, a former New Zealand Outdoors Party candidate and prominent anti-vaccination advocate.

There isn't expected to be another hearing for the charges until January, and both defendants have been excused from attending.

Mansfield told the Herald after the hearing that his client - who he described as pro-choice, not anti-vax - doesn't believe he ever violated the law. Tamaki also doesn't accept that the gathering itself was unlawful, he said.

"Mr Tamaki doesn't accept that he's encouraged non-compliance," he said, explaining that masks and hand sanitiser were handed out at Auckland Domain. 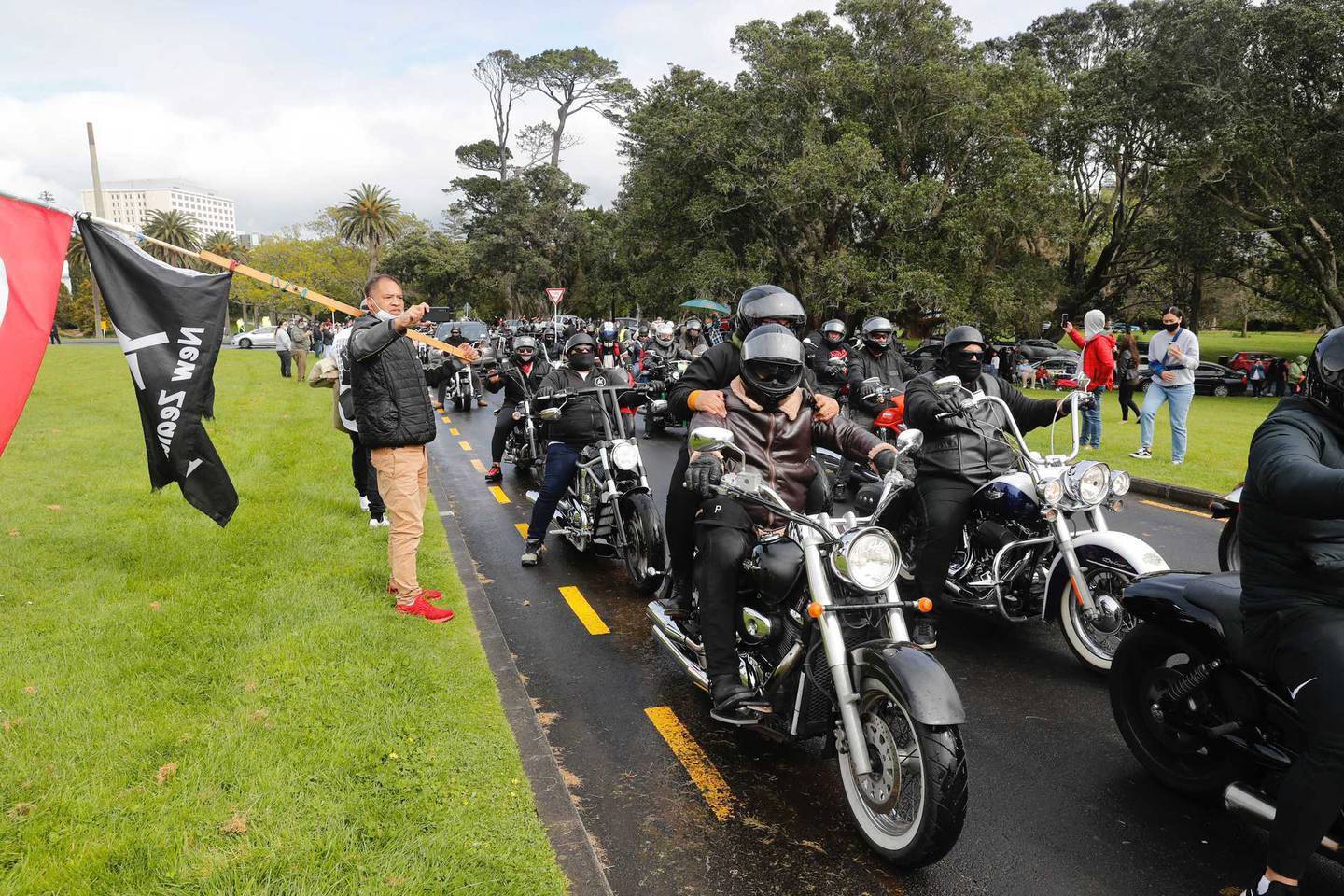 Attendees were encouraged at least seven times during the protest to remain socially distanced and in their bubbles, Mansfield said, adding that his client wore a mask except when on the podium, addressing the crowd.

In his post-hearing statement, Tamaki predicted his "landmark case" would help challenge what he described as "excessive state control".

"This is the first step in the much bigger battle at hand here," he said.

"...This government has completely overreached with their excessive power, and it is time that they are made accountable for the social carnage they have inflicted on the New Zealand public. It is time this government removes all lockdowns, limits and restrictions."

Tamaki also predicted that his case will help strengthen the NZ Bill of Rights 1990 "so no further laws passed by this government can override our freedoms and rights". 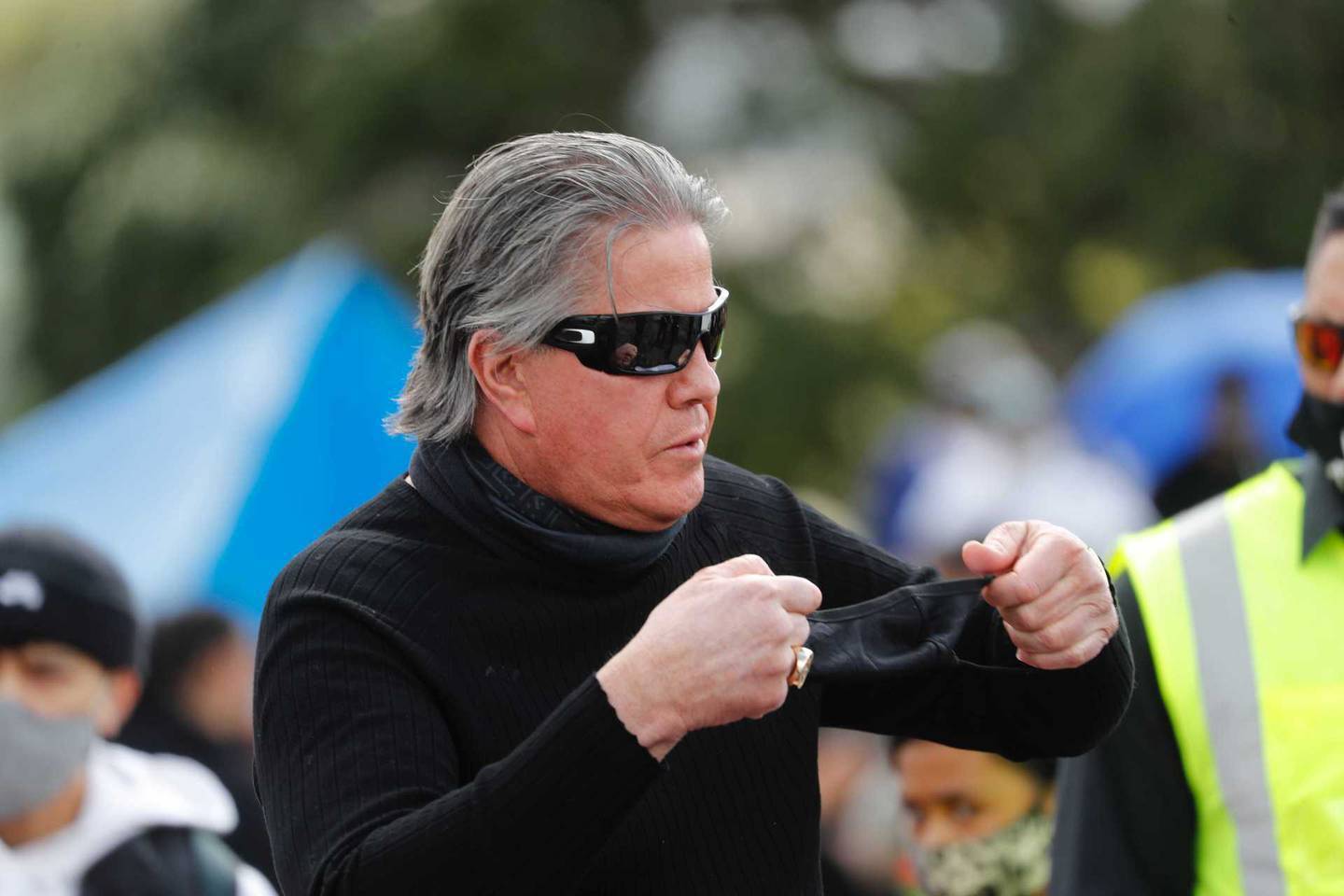 Brian Tamaki says people should be thanking him and his supporters for the anti-lockdown protest. Photo / Dean Purcell

"This government has attempted to use a 'state of national emergency' to justify limiting our rights and freedoms under the NZ Bill of Rights 1990," he said in his statement. "Can the government please explain how this flu-like virus shows 'extreme impacts on public health' where there is a survival rate of over 99%?

"How does this proportionately justify limiting the entire nation's freedom of expression, freedom of peaceful assembly, freedom of movement, freedom of discrimination and the right to refuse to undergo medical treatment?"

Ardern on Monday extended Auckland's alert level 3 restrictions for another week, as cases continue to rise.

Health officials and academics have warned that a sudden abandonment of Covid-19 restrictions while the Delta variant is still circulating in New Zealand could cause the nation's already stressed ICU capacity to become overwhelmed, as has been the case in other countries over the course of the pandemic.

Director-general of Health Dr Ashley Bloomfield told the AM Show today that hospitals can cope with the current rise in case numbers. He estimated that about 10 per cent of cases will require hospital care and about 1 to 2 per cent ICU or HDU care.

But Covid-19 modeller Professor Michael Plank said that loosening current restrictions "could easily cause cases to spiral out of control".

The solution, both experts have said, will have to be increasing New Zealand's vaccination rate.