A 63-year-old man has been charged in relation to organising and attending the Destiny Church-led mass anti-lockdown protest in Auckland on Saturday.

Police confirmed this afternoon the man, 63, has been summonsed to appear in Auckland District Court next Tuesday.

Two independent sources have confirmed to the Herald the man summonsed to appear in court is Brian Tamaki.

Tamaki spoke at Saturday's rally and is the leader of the Destiny Church.

The man will appear on charges which relate to breaching the Covid-19 Public Health Response Act 2020 and Alert Level 3 Order.

The gathering of around 1000 people on Saturday was in breach of alert level 3 restrictions, and the investigation is ongoing, police said.

Further charges or enforcement action against others involved in the event are being considered.

"Police acknowledge that the taking place of this event was frustrating for our communities and we want to assure people that the police response on the day was planned and based on operational assessments as is usual for an event of that size," Superintendent Shanan Gray said.

"Police decision making when it comes to these types of events will always be about community safety first and foremost."

Destiny Church leader Brian Tamaki addressed the crowd of around 1000 people outside the Auckland War Memorial Museum at Auckland Domain, protesting against the Government's Covid-19 restrictions in the city.

The protest was condemned by Prime Minister Jacinda Ardern and Auckland Mayor Phil Goff, who said he supported sanctions against the church leader.

More than 128,000 people signed a petition calling for Tamaki to face charges.

"Police are disappointed at the large numbers, and that organisers did not follow through on undertakings they had given police about how the event would be managed," a police spokesperson told the Herald yesterday. 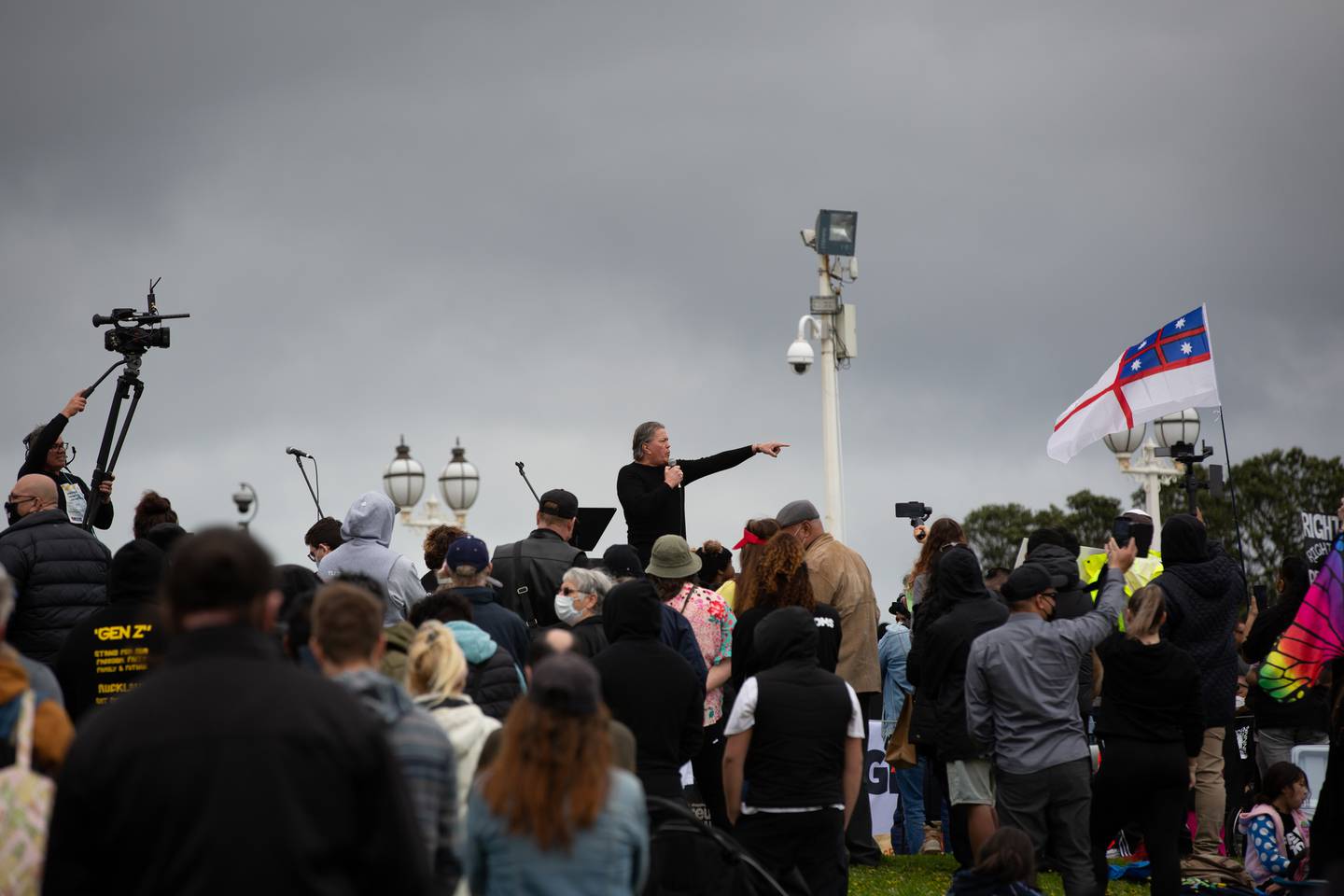 Around 2000 people gathered at Auckland Domain for an anti lockdown protest on Saturday. Photo / Sylvie Whinray

Ardern said the protest was "a slap in the face" to Aucklanders who had been following the rules for weeks.

The Prime Minister confirmed the protest was illegal but would not say if there should have been arrests, saying it was an operational matter for the police.

Tamaki hit back at Ardern's comments on social media.

"If any true democracy-loving caring NZer ... value their Freedoms (sic) and the Freedoms of their children's children, you should never be angry at people who want to recover what's priceless and beyond value, and protect them," Tamaki said on Facebook.

"What price do you put on your personal Freedoms? Why would you hate us for that? As for the pathetic cry, you will cause a super-spread is unreasonable panic.

"You're vaccinated, not in the vicinity, and safe in your bubble, you then should be thanking us, who took the courageous risk, in the face of restrictions, to push back on oppressive laws from this Government."

As many as 2000 anti-lockdown protesters gathered, with the crowd including families with young babies on picnic chairs. 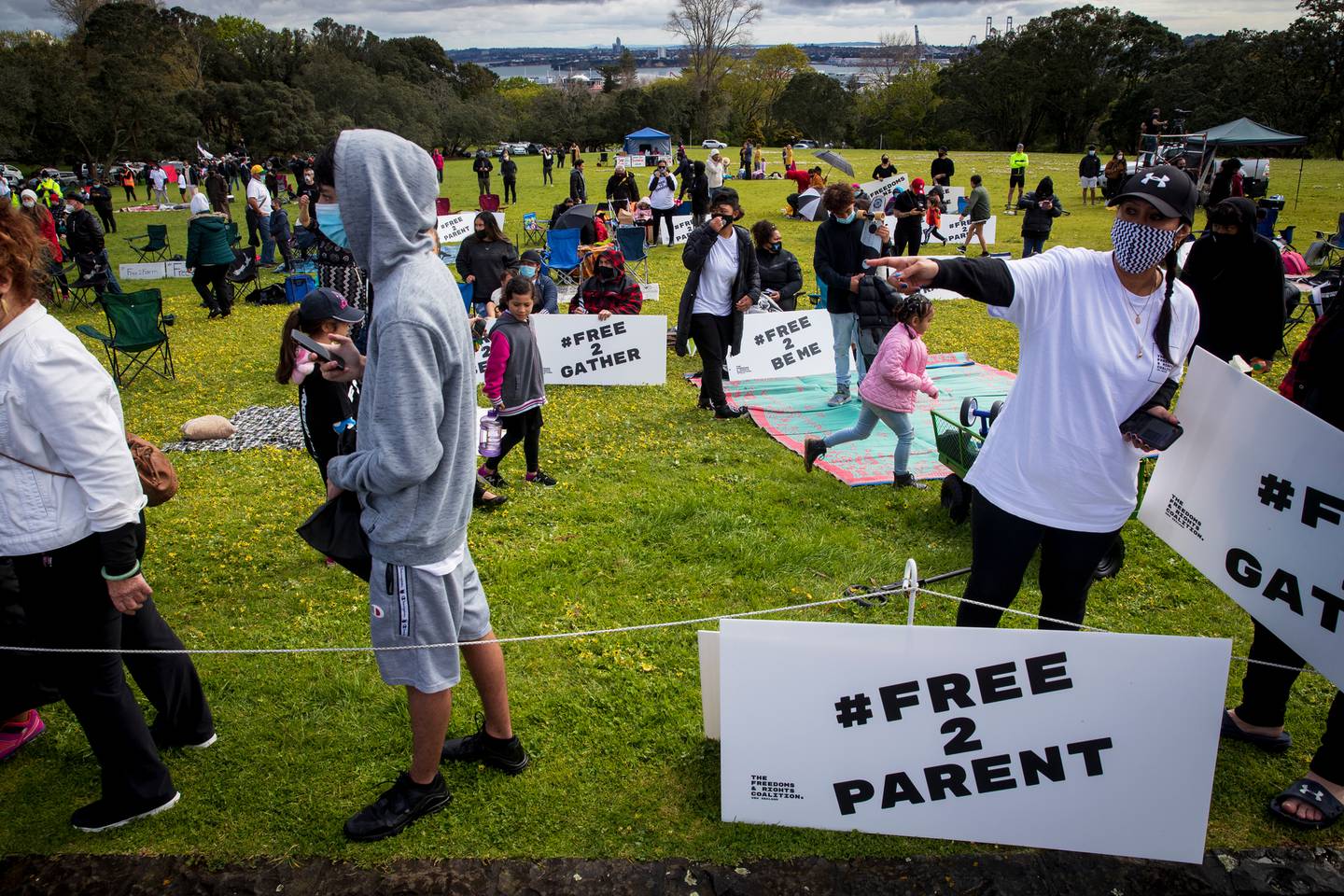 Families with children were among protesters at Auckland Domain. Photo / Dean Purcell