Destiny Church leader Brian Tamaki will likely be separated from other inmates for 14 days and routinely tested for Covid-19, along with all newly arrived prisoners at Mt Eden Corrections Facility.

He also won't be allowed to have any face-to-face visits from family or friends, or his legal representation, while in custody.

That's because Mt Eden prison is under stage two of a three-tiered protection framework that prisons operate under.

Tamaki was arrested yesterday for allegedly breaching his bail conditions and was remanded in custody.

While Tamaki has not confirmed his vaccination status, he has spoken openly in the past about being vaccine hesitant and has rallied at anti-lockdown and anti-vaccine mandate protests.

More than 1700 inmates have not yet received any dose of the Pfizer vaccine, but 5,490 are fully vaccinated - almost 70 per cent of the prison population.

While vaccinated and unvaccinated inmates are not separated in Corrections facilities, any newly arrived prisoner is separated from others for their first 14 days in prison, Corrections told the Herald.

They undergo routine Covid-19 testing on arrival, day 5 and day 12.

At Mt Eden Corrections Facility where Tamaki is on remand, more than 500 people have been fully vaccinated on site since the national vaccination programme in prisons began in May.

"All prison sites are offering the vaccine to all prisoners newly received into prison, and if they decline at that point, we continue to provide additional opportunities for them to take up the opportunity to be vaccinated," Corrections says on its website. 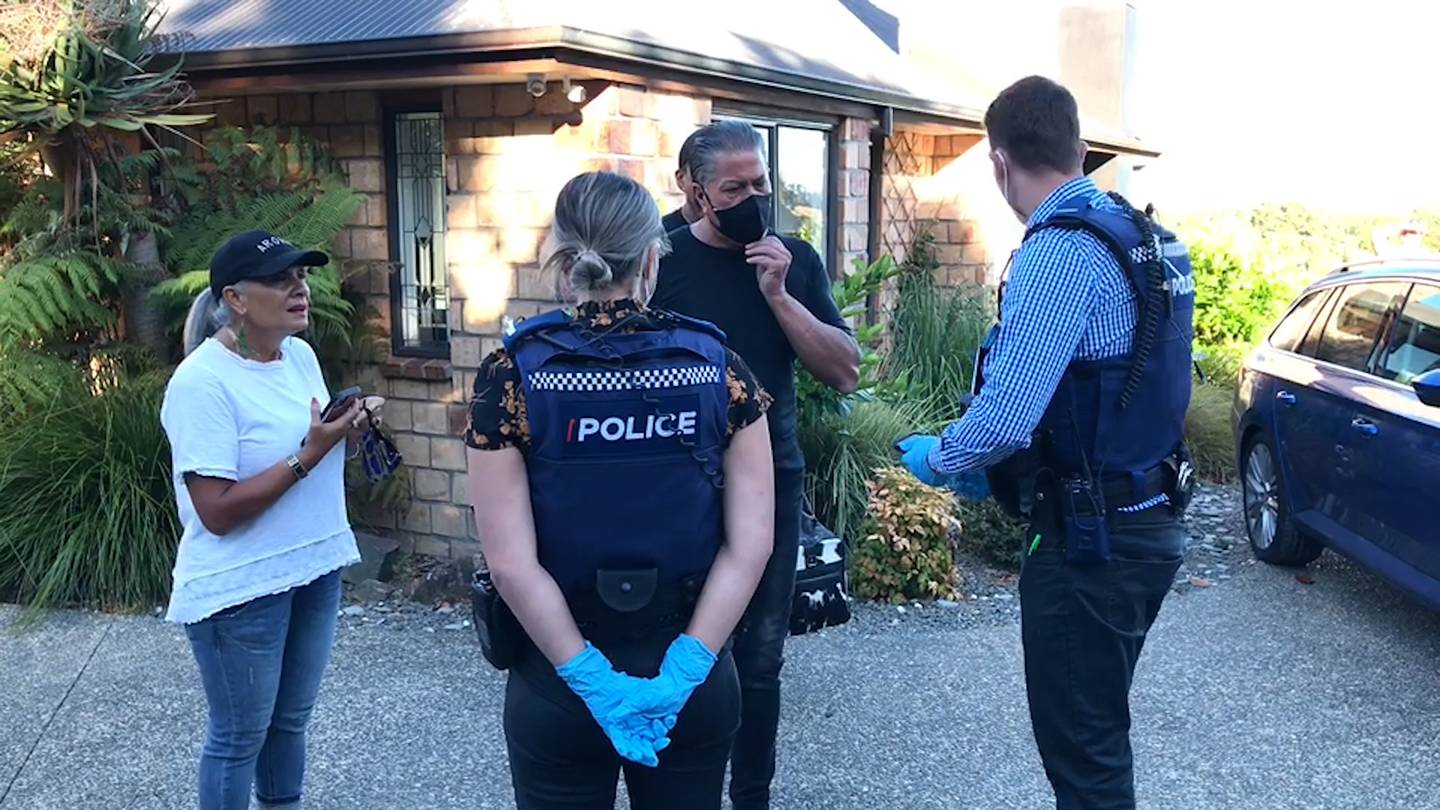 Brian Tamaki was arrested at his Auckland home yesterday. On the left is his wife Hannah Tamaki. Photo / Supplied

There have been allegations that he breached bail conditions by speaking at a January anti-vaccine rally in Christchurch which was attended by more than 100 people - more than allowed under the traffic light system.As part of his bail conditions, Tamaki is not allowed to "organise or attend any protests in breach of any Covid-19 level requirement".

Tamaki's bail application was refused yesterday and he was remanded in custody until his next court appearance on January 27.

Since December, prisons have worked on their own three-stage protection system separate to the traffic light framework.

At the most restrictive of the three stages, no visits to the facility are allowed and PPE must be worn at all times alongside a suite of guidelines.

Mt Eden Corrections Facility is at stage two, under which no face-to-face visits are allowed by private or legal visitors.

Wearing of PPE is encouraged but not enforced for prisoners under stage two, but it is mandatory for staff. Separate bubbles are created for vulnerable prisoners among a raft of guidelines.

At the least restrictive stage, any positive cases in the prison will be confined to quarantine units. Stage one is likely to be used for prisons in green or orange settings of the traffic light system, Corrections said.

District managers decide which stage their district or sites will operate at with the support of a decision panel, which includes union representation and Health & Safety representatives.

Meanwhile, any visitors, staff and contractors are required to be fully vaccinated, undertake health screening on entry and contact tracing processes under all three stages.

"There are measures we have in place for staff, including the use of full PPE and health screening on entry to prison, to keep them safe," a Corrections spokesperson told the Herald.

"We focus on strict infection prevention and control measures to keep Covid-19 out of the general prison population, therefore keeping both vaccinated and unvaccinated people safe."

There are three cases of Covid-19 at Spring Hill Corrections Facility in Waikato, the only current cases in prisons across the country. One case is partially vaccinated, one is not vaccinated and the vaccination status of the third case is unknown.

A total of 76 cases have been managed by Corrections since March 2020.