A Māori leader has slammed the Australian Government's policy of returning people with criminal convictions - known as 501s - as the prime cause of an increase in gang-related violence in Auckland.

His comments follow a spate of shootings, including alleged homicides in Flat Bush and Mt Roskill within the last week.

Tukaki, who has long been involved in the area of returnees on both sides of the Tasman said it was pointless to blame New Zealand politicians, regardless of whether they were National or Labour.

"Let's be really clear here – there have been concerns for the last several years that new gangs and chapters are getting a foothold in New Zealand because of the rising tide of returnees known as the 501s.

"To be frank we saw it as far back as Waikeria and we are seeing now with an increase in gun-related violence in Auckland. The latest shootings are an indicator of that."

"The truth is these violent thugs and criminals don't care two hoots about the community, they don't care about culture or tikanga, they care solely about establishing their criminal enterprise.

"They have no or little attachment to New Zealand and many of them, while they may have been born here, have been raised in Australia – they are products of the Australian environment – and through that environment they have connections, they have links and they have supply chains" Tukaki said.

"In turn we can potentially expect to see tension between these newly established gangs and existing ones that could see an ever greater increase in gun violence in Auckland – we could see gang land wars similar to those that occurred in both Sydney and Melbourne in the early 2000s if we are not careful."

Tukaki said the flights of returnees took a break during the latest Delta outbreak but are increasing in number. He also weighed in to support the police:

"The police need the extra resources to increase their surveillance and intelligence but we need to go further we need to strengthen those links wherever possible with the Australian authorities. And to be frank, while our border controls have been about keeping Delta out we need to increase resources and invest more to stop criminal enterprise coming across the border."

"The reality is when these people come back to New Zealand, some but not all, don't give two hoots about the benefit or wrap-around support – why would you when you can make twenty, thirty times that amount in a single drop through criminal activity?"

"In my mind there is now only one solution left – turn the planes around and make a point to the Australian Government that New Zealand is not the dumping ground for your criminals. Australia should be used to that, given what they did with the Tampa all those years ago."

"This is not something you expect in a residential area after a day of Christmas celebrations," Detective Inspector Fa'amanuia Va'aelua acknowledged of the shooting and AOS callout that resulted in a tense, hours-long standoff at a property on Bezar Place in Flat Bush lasting well past sunrise.

The latest incident came roughly 52 hours after a shooting at a Mt Roskill home resulted in the death of 23-year-old Brian James.

"They are concerning," National MP Mark Mitchell told the Herald of Auckland's shootings in recent days. "Gun violence is the worst we've seen in this country, and it's definitely related to the increase in gang numbers and the firearms available to them."

The former police officer turned politician, who serves as the Opposition police spokesman, said he blames 501 deportees from Australia making gangs stronger in New Zealand at a time when he believed the political will for a crackdown has been weak.

Law enforcement officials were not available for comment yesterday.

In the latest incident, a 38-year-old man was taken into police custody yesterday around 8am upon emerging from the Flat Bush home, hours after the police negotiation team made contact with him.

Shortly thereafter, police found the body of another man inside the home.

Police received a 111 call from a resident about 1.15am, saying they could hear a person in distress at a nearby home, followed by gunshots.

"AOS took over about 2am - they had a variety of tools including rifles, handguns and chainsaws," said a nearby resident who awoke around 1.30am to the increasingly louder calls of a police negotiator trying to contact a man inside the home.

"They were trying to get the guy out. They used ladders to reach the second floor and prised open a window."

Police acknowledged that AOS members entered through the window and brought out several people who were unharmed, including a child.

The witness said the AOS members on the ladder appeared to be communicating by hand signals to officers on the ground who in turn appeared to be trying to distract the suspect. About five people, including a woman who looked distraught, climbed out of the window around 4am and were quickly led away from the property, he said.

The witness praised the way police handled the situation.

"It's generally a quiet neighbourhood but as we've seen throughout Auckland it's obviously changing," he said. "It could be anywhere at any time that this could happen."

Only a few hours later, police identified Brian James as the person who died following the December 23 shooting at a Glass Rd residence in Mt Roskill.

Police have said James was shot dead around 9.30pm after two people entered the property and an altercation broke out. Two others were hospitalised with injuries, but police have said they are not life-threatening.

Police haven't yet found the people who fled the scene after the shooting, and a scene examination continued yesterday. 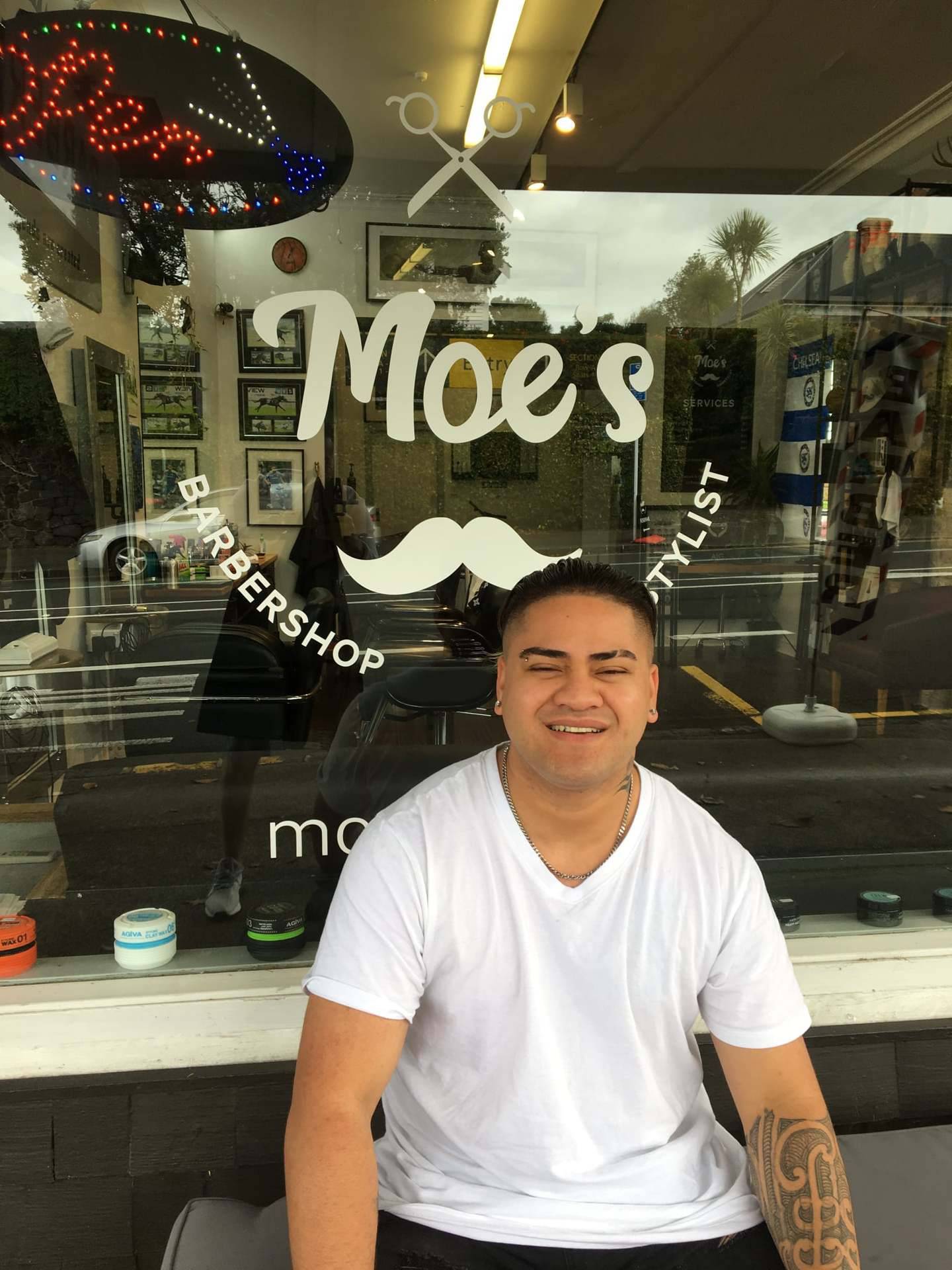 Barber shop owner Moe Ball posted this photo of Brian James to the shop's Facebook page as a memorial to his former coworker. Photo / Supplied

Detective Inspector Scott Beard said police are still working to determine why the three people were targeted but it doesn't appear the shooter went there "by chance". He acknowledged police are looking into the possibility it was gang-related but so far, he said, there is no evidence to make a determination.

Household members are linked to the HFK gang, the Herald has been told.

Mitchell, who represents Whangaparāoa in Parliament, said the gun violence of late hasn't been restricted just to Auckland.

"I think gang members are bringing it everywhere," he said. "There are obviously hotspots - Auckland is probably one of them just by the population."

In part, he blamed those who have been deported from Australia due to criminal convictions, known as 501s, for introducing "a new level of violence, funding and organisation" to New Zealand in recent years.

Law enforcement officials and the Government have touted large-scale Operation Tauwhiro as having made a dent in gangs and gun violence.

There have been 865 arrests attributed to the operation as of September, along with the seizure of 987 firearms and nearly $5 million in cash.

But Mitchell's tepid evaluation of the operation is that it has amounted to a "modest success".

"Really, it's just operated on the fringes," he said, adding that he would like to see more resources thrown at the endeavour. "It's not made major inroads and that's why you continue to see [gun violence] on an almost daily basis."

He described a Covid-19 checkpoint in Northland earlier this month - where officers worked with iwi volunteers after Auckland's borders reopened - as an example of a "complete and utter waste of police resources" that could instead go to cracking down on crime.

"The political will is completely lacking," he said of tackling gangs.

But police have seen "excellent results" from Operation Tauwhiro, Assistant Commissioner Sandra Venables told the Herald last week, urging those in the community who are fed up to speak out and help serve as law enforcement's eyes and ears during investigations.

"Police has been very open this year around some of the behaviours from organised crime groups using firearms against one another and we also note significant arrests have been made in relation to these gang tensions," Venables said.

"Police have no tolerance for gun violence in our communities and I want to acknowledge the hard and determined work by police staff across Tāmaki Makaurau, and other regions, in investigating these sorts of incidents.

"There will be some individuals who know of people illegally in possession of firearms or that are engaging in this sort of behaviour. We encourage those people to report suspicious or illegal activity to police."