Kee Lee was taking his daily morning walk to Murrays Bay Beach when a hand grasped his shoulder from behind and spun him round to face a raised knife about to strike.

The 66-year-old retired builder, who is also battling prostate cancer and recovering from a shattered kneecap, doesn't know exactly how he evaded the blade.

"I was terrified. He held my left arm with his right hand I think. In his left hand he has one of the biggest kitchen knives - long and wide the blade," Lee told the Herald.

"I was just walking slowly because I have a knee not fully recovered yet so I'm just limping. The knee cap was smashed last year.

"I knew I needed to do something but [I had] no time to prepare anything so I just snatched my left arm away from him. I was able to start running backwards."

It was shortly before 11am Thursday on an otherwise deserted residential street in a suburb on Auckland's North Shore locals insist has been a haven of safety and calm for decades. 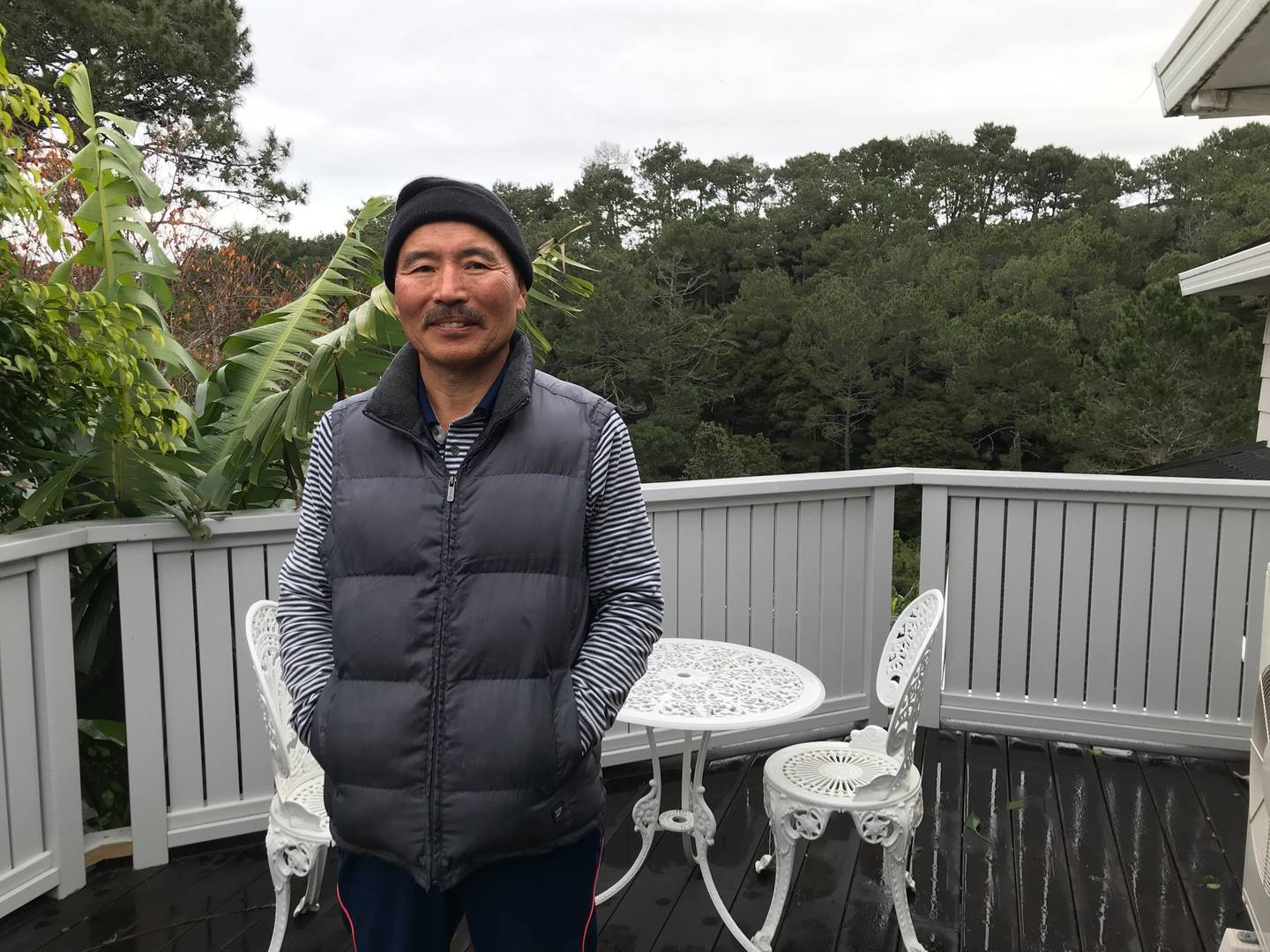 Unknown to Lee then, the attacker had seconds earlier stabbed one elderly lady in her doorway in a house just metres away on Westbourne Road Rd, Murrays Bay.

It is understood the attacker himself may live nearby on the same road.

A 41-year-old appeared in Waitākere District Court on Friday morning charged with four counts of wounding with intent to cause grievous bodily harm and one assault charge. He has been remanded in custody without yet issuing a plea.

Speaking from his tightly locked and shuttered Murrays Bay home yesterday, Lee explains how he managed to avoid becoming the fifth stabbing victim that day.

After briefly freeing himself from the attacker's grasp, Lee says he was caught again just four or five metres down the road by the man.

"I had to do something to save my life so I turned back [to face the attacker]," Lee said.

"I realised I was not able to run away from him because he was much younger, and an able man, strong. So I decided to hold his knife… holding his arm [so he] couldn't stab me. I held his wrist." 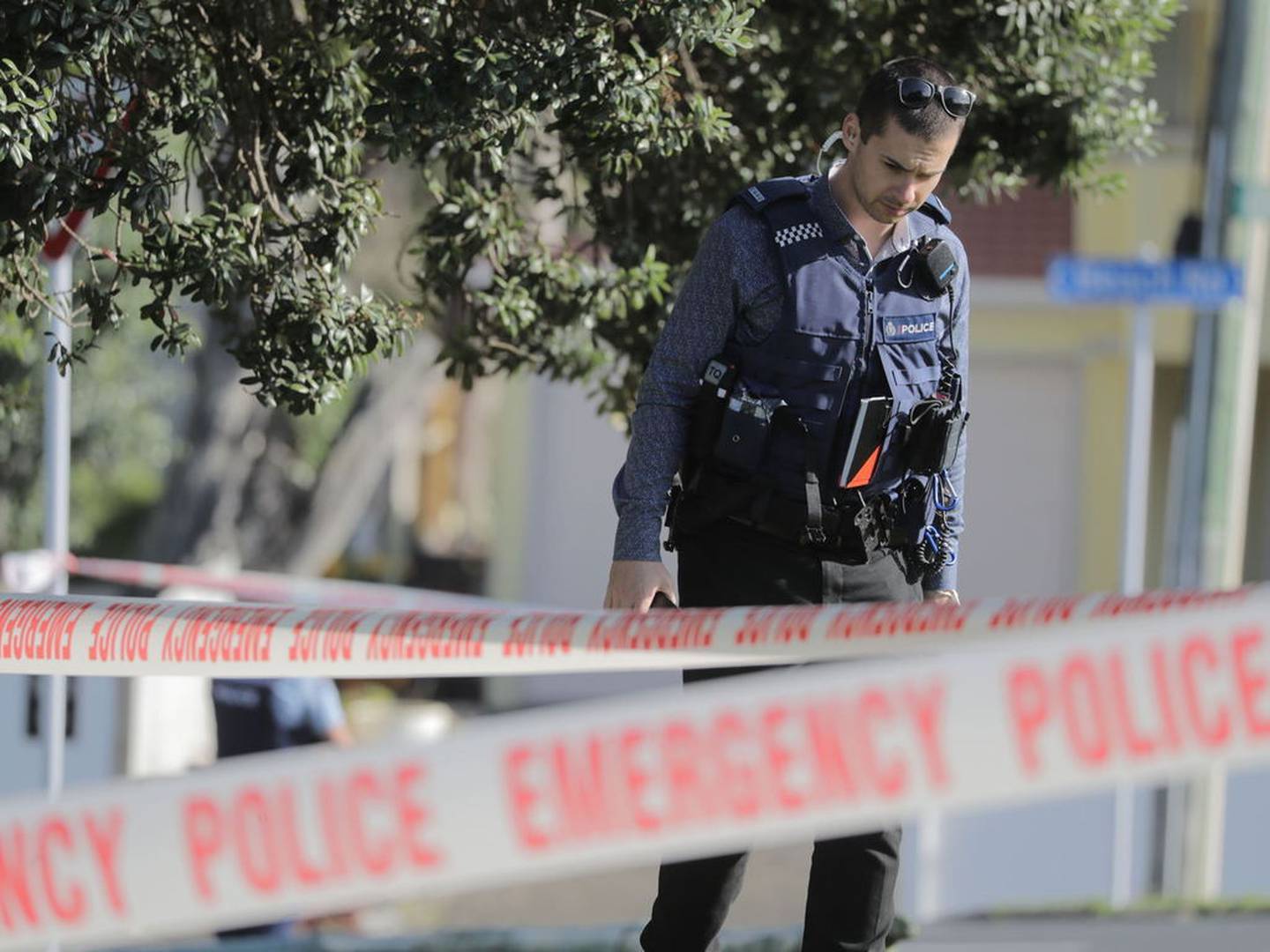 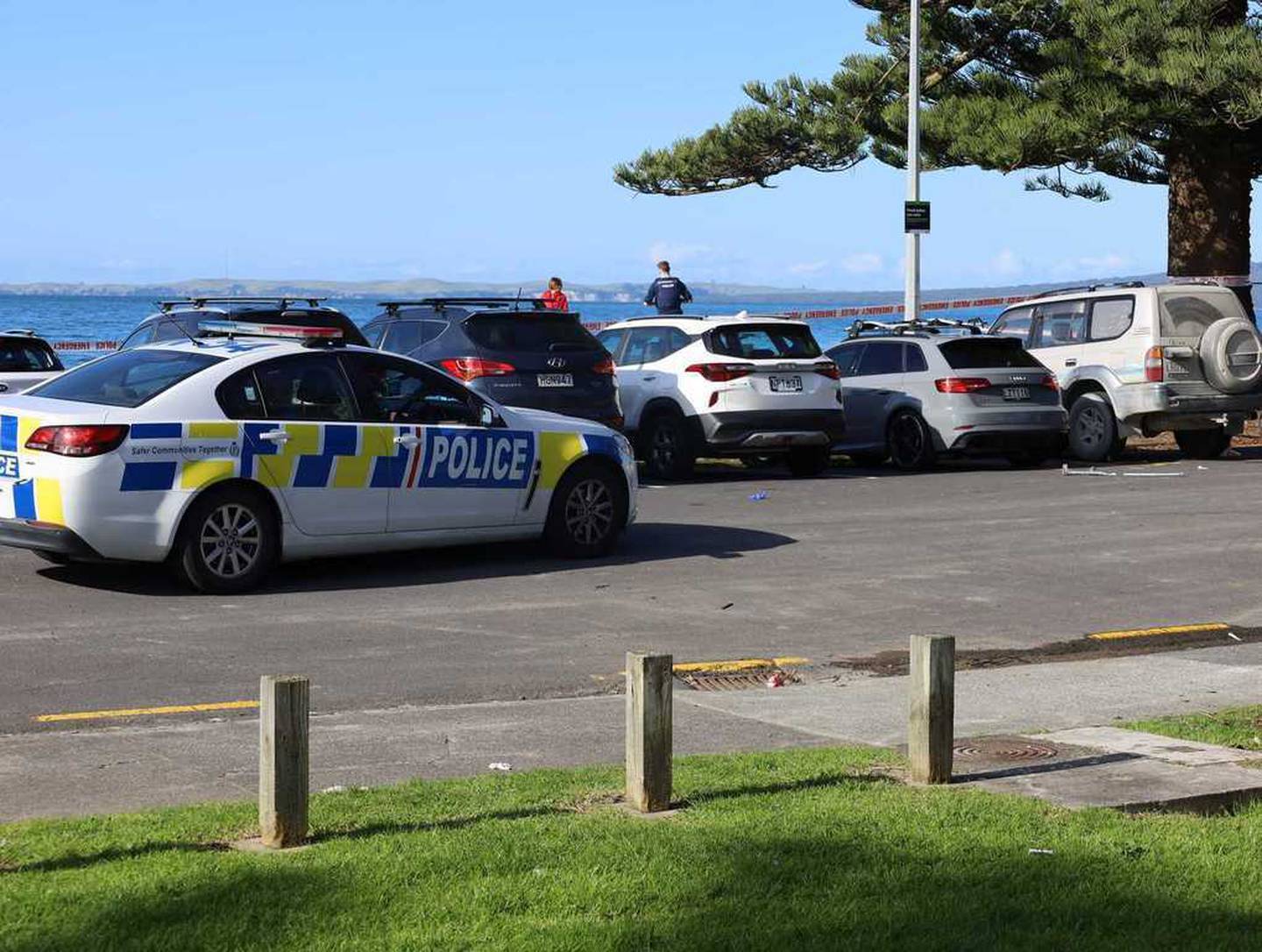 Police cordoned off a section of the Mairangi Bay waterfront after yesterday's incident. Photo / Michael Craig

Lee said the attacker again had the knife raised above his head as he grappled with him.

"Because I am shorter than him there is some distance between us, and I reached up my hand to hold his wrist. He pulled it away and tried another [stabbing] action," Lee said.

"So I turned around and ran away again even though I knew I will be caught again soon. At that time I thought I was going to be caught again so I started screaming. Short, high screaming, several times, three or four times while I am running."

Lee said he decided against running to the door of a nearby property out of fear he would be cornered if nobody was home.

"I saw one red car parked in the street, so I think 'oh that'll be my shelter'," Lee said.

Laughing at the absurdity of it, Lee said his plan was to "make a game" of the car obstacle and try to run the opposite direction of his attacker either side of the red car.

"At that point he gave me up. He was going to the beach." 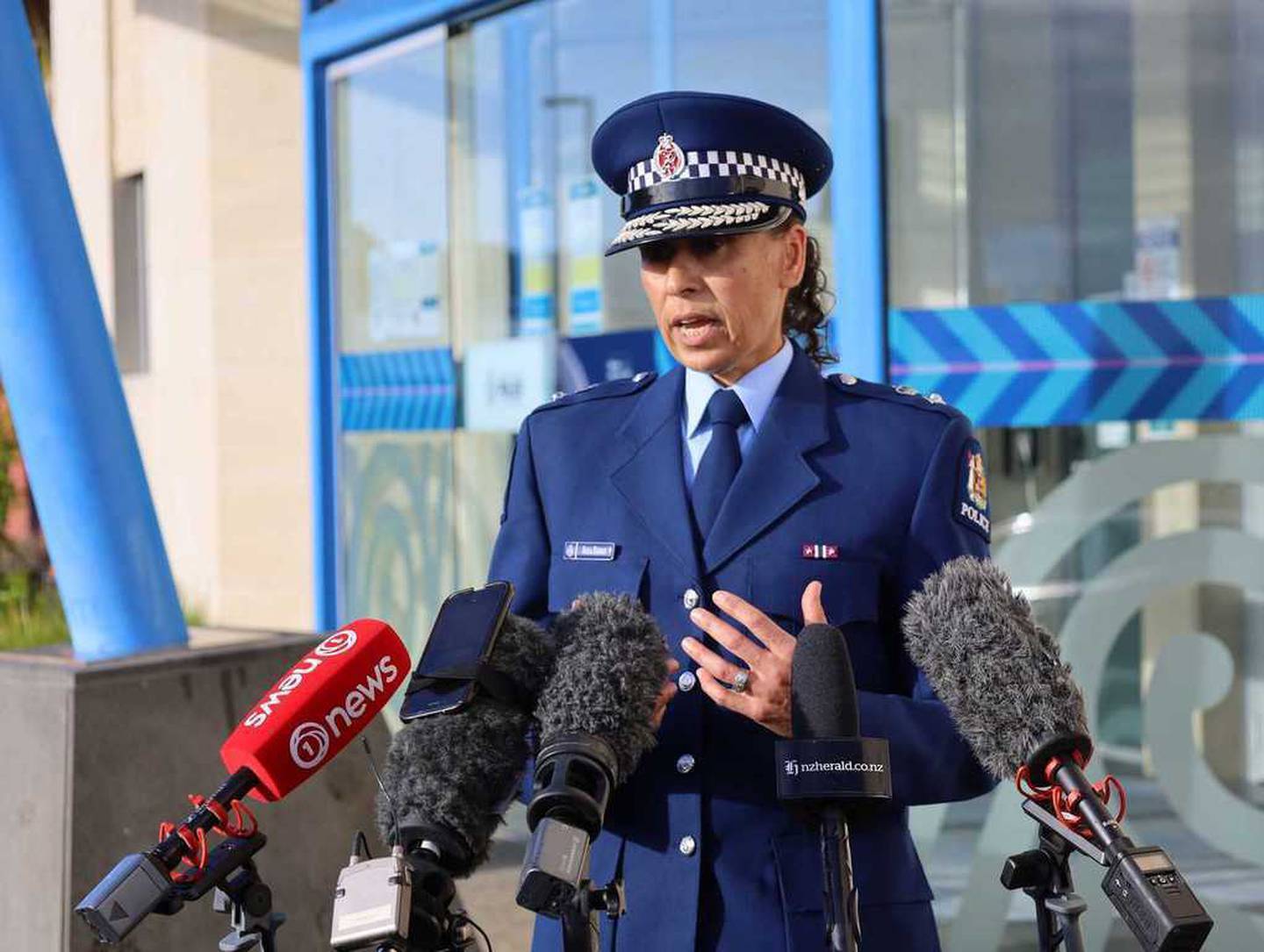 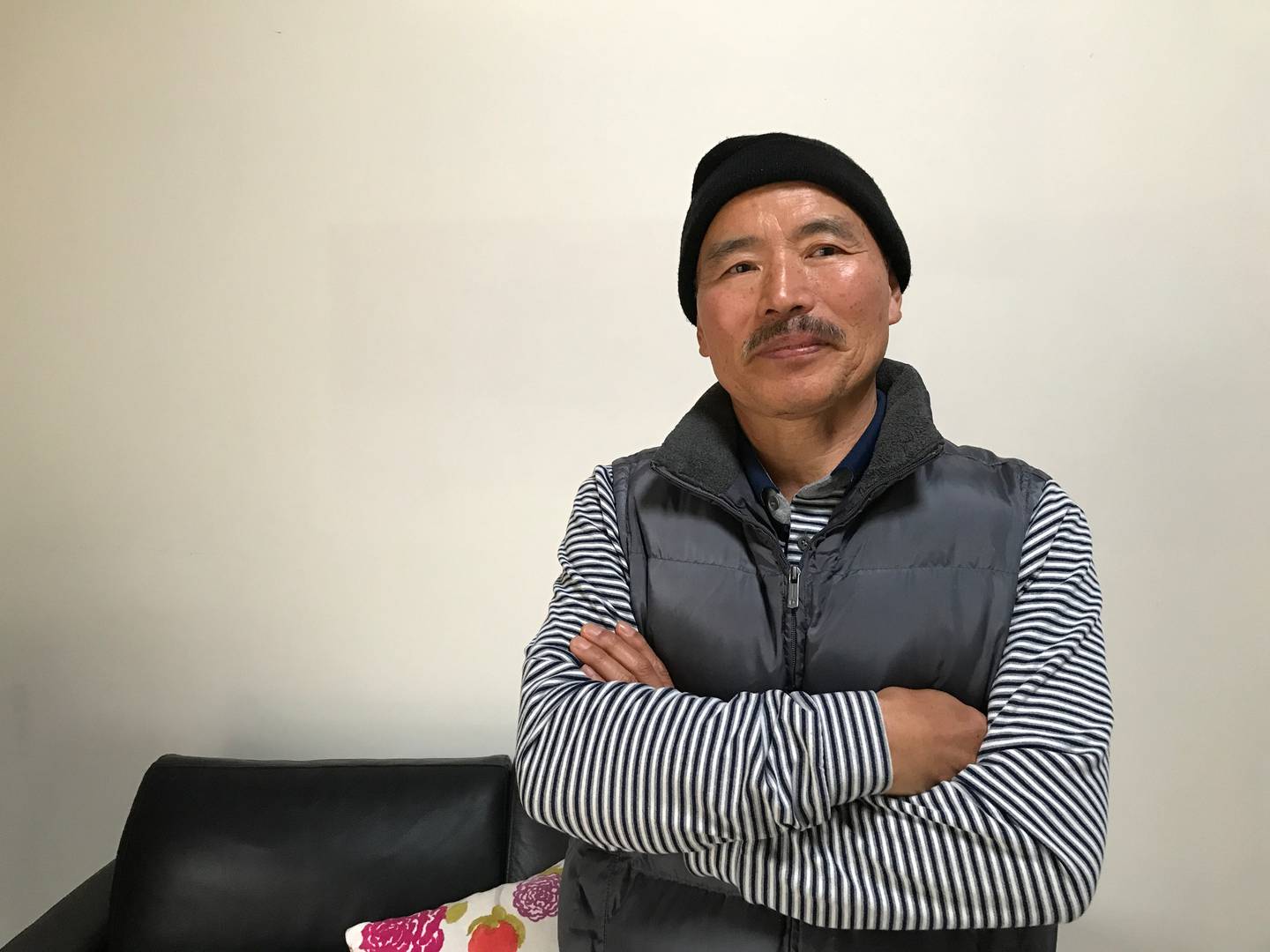 Kee Lee, 66, has lived in Murrays Bay on Auckland's North Shore for 12 years. On June 23, 2022, he fought off a man armed with a knife who stabbed four other members of the public. Photo / Tom Dillane

With tears in his eyes, Lee says at that point he "wanted to raise an alarm" to alert the mothers and children he knew would be down at Mairangi Bay Beach just a couple of hundred metres away.

"Usually at that time not strong men would go to the beach, so only older people, women with babies, would be around there," Lee said.

"So I want to raise the alarm to them, try to chase him but without anybody's help, without anything in my hand, I cannot do it. I know myself, I have a limp, not a fast runner, I am very old and [have] many problems."

Lee says he kept yelling for help from the street until another elderly man finally came out.

But in a response that baffled Lee at the time, the elderly man just returned to his house despite obviously having heard Lee's screaming.

"Nobody else wanted to come out so I decided to follow him and go into his house," Lee said.

"When I got to his house he was talking on the phone." 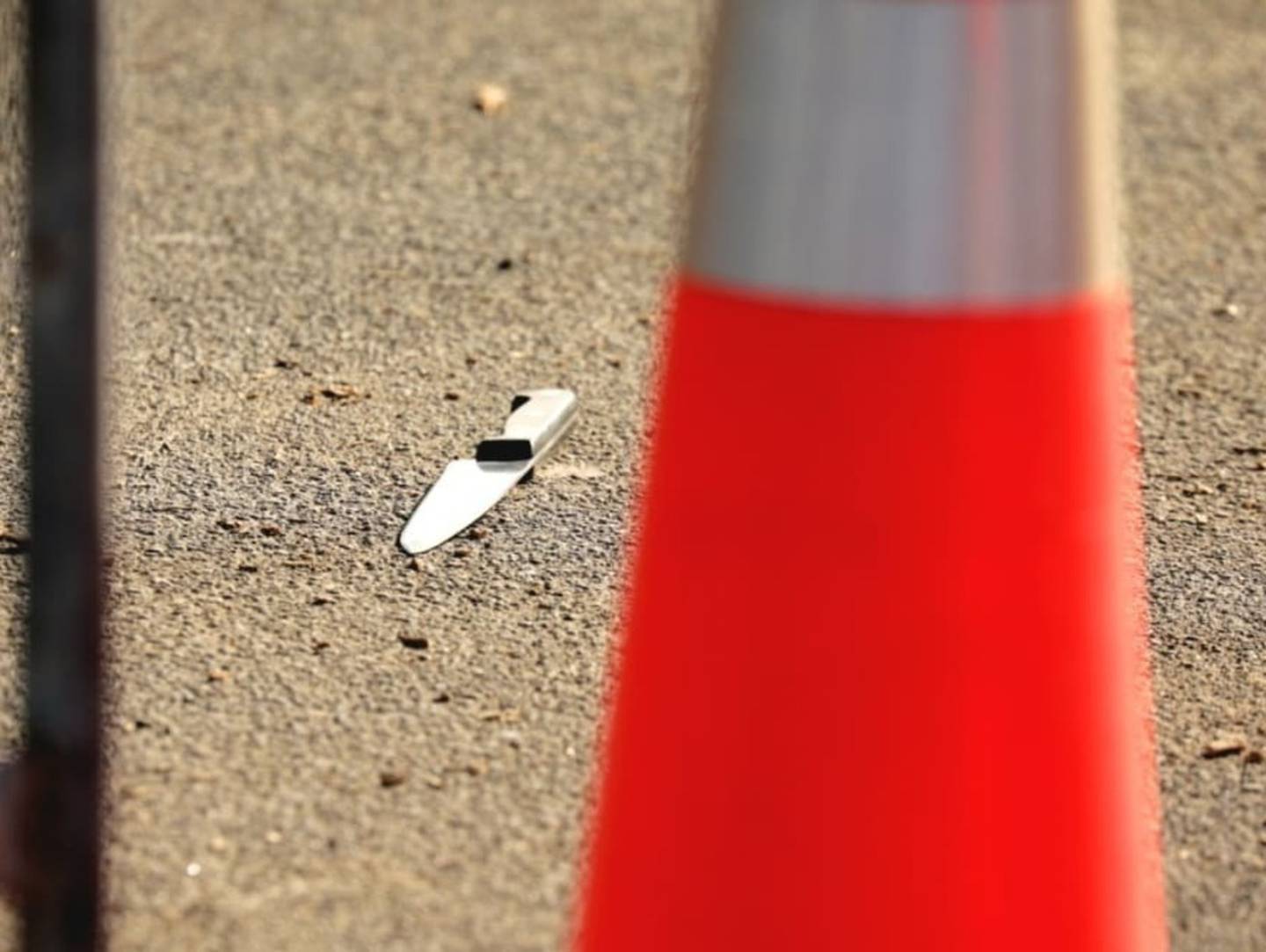 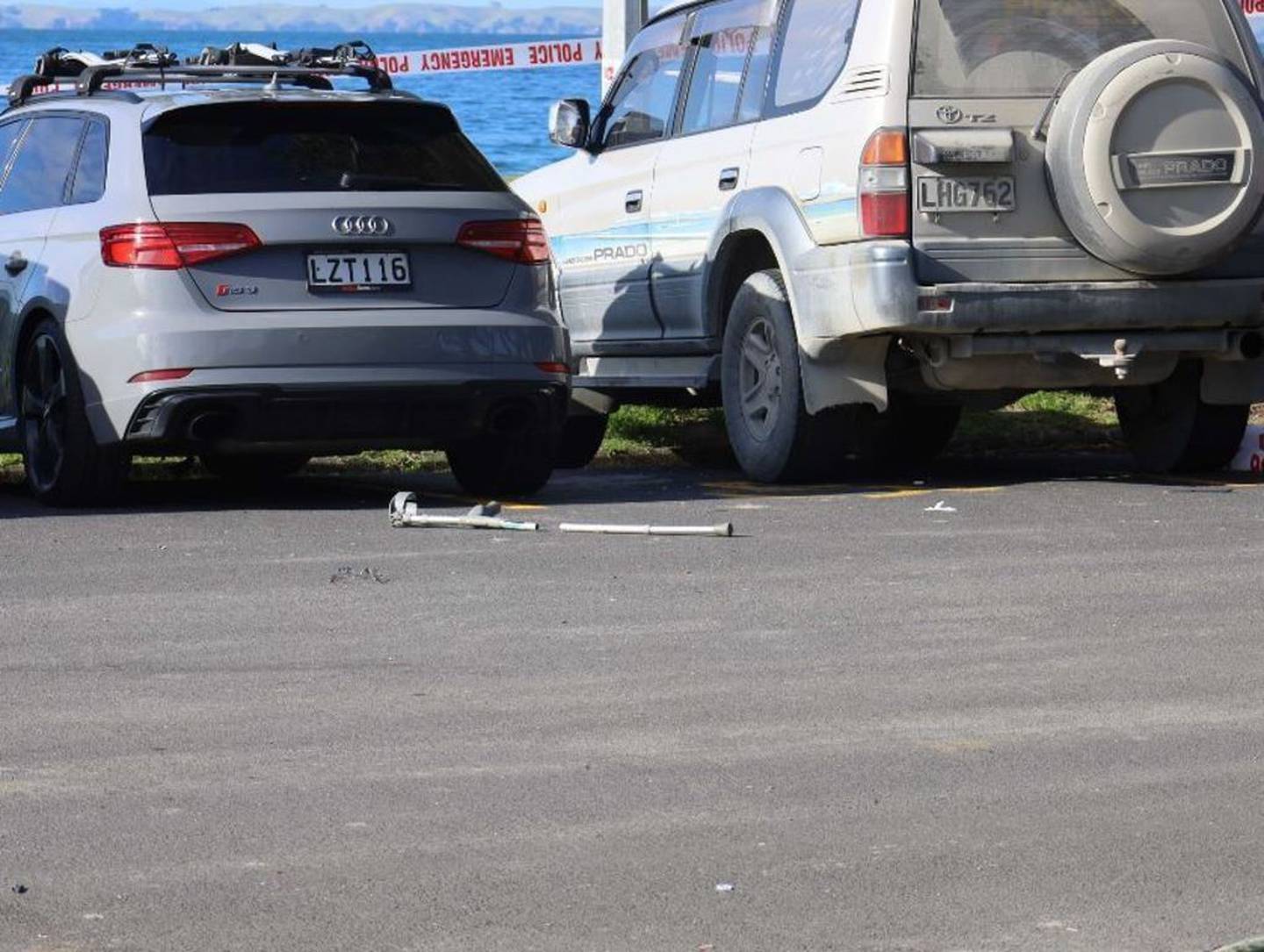 A crutch was marked as evidence by police after it was used by members of the public to subdue a man carrying a knife. Photo / Jed Bradley

Lee then saw a sharp spade from the man's open garage which he wanted to grab to go after the attacker - but he was stopped by the property owner still on the phone.

"I want to go chase him, I want to raise alarm, because I know where he was going," Lee says, sobbing.

At this point, Lee saw the blood in the hallway and the scene began to make more sense.

"I noticed his wife, old lady, was attacked… his wife was sitting inside the entry, shaking and bleeding. He [the husband] was talking to the police."

"She was stabbed on the shoulder… and she definitely got a cut and bleeding [on the hand]."

Lee attempted to comfort the injured woman while her husband was preoccupied on the phone.

"I noticed that she feel cold. Her left arm was shaking very much, so I want to help her. So I hold her shaking arms and ask her have deep breath otherwise you can go into shock."

Meanwhile, the attacker had wandered down to Mairangi Bay Beach and stabbed other members of the public near a bus stop.

One woman described screaming for help as she ran from the man as he brandished a "big knife", while another witness reported seeing a builder scream and clutch his stomach in pain.

Four members of the public have been stabbed at Murrays Bay on Auckland's North Shore. Video / NZ Herald

Ultimately, a brave group of bystanders banded together to subdue the attacker further south down Mairangi Bay Beach. One reportedly used a crutch to bring him to the ground.

Police arrived shortly after and handcuffed the offender around midday.

"It could've been a lot worse and that's why I really need to acknowledge the bravery of those members of the public," she said.

One of the stabbing victims yesterday told the Herald the attacker gave her "a hell of a fright".

"I was lucky it was pretty moderate what I had, the wounds, so I was lucky that way," the victim said.

"But the others might not be so lucky, I don't know."

Lee had waited at the fellow victim's house on Westbourne Road Rd until the police and ambulance arrived and provided what information of his attack he could.

But eventually, he had to tell the police he had to leave to attend a scheduled appointment with a urologist that afternoon for his prostate cancer in North Shore Hospital. He made the appointment.

A day after the attack, Lee says he remains very scared, alone in his Murrays Bay home.

His wife has been away on a trip back to South Korea for a month now, and Lee is for the moment unwilling to leave his property.

"Since the incident I've become very cautious so I don't want to open the gate, open the door. Even in daytime I close the curtain here. I don't want to go out for a walk because I'm frightened. At the moment I am alone by myself." Kee Lee in his Murrays Bay home in front of a photo of his family. Photo / Tom Dillane

The 66-year-old immigrated from South Korea in 1990 and has lived in Auckland and Christchurch. He has two adult daughters with their own families - one who lives in South Auckland and the other in South Korea.

The 66-year-old was still working as a builder and labourer on construction sites until last year, when he broke his kneecap after falling from a ladder.

Lee says he may travel to be with his wife in Korea if she cannot return soon.

"At the time [of the attack] I think it's okay, no problem. But time passed and I sometimes cry by myself scared to open the doors, scared to go out. If my wife was here with me [I'd be] much better.

"But maybe sometime later I'll want to go out for a walk."