The owner of a shop says CCTV footage from his business shows two people dragging the body of a man from the backseat of a car this morning in Grafton, Auckland.

Police have confirmed a man died this morning after a shooting.

Police were initially called to an address on St Johns Road shortly after 6am to reports of shots being heard, followed by people screaming, police said.

A vehicle left the scene before stopping at a second location on Parkfield Terrace, Grafton, police said.

A body covered by a sheet was seen in the street about 7am. Police on the scene in Grafton, Auckland. (Photo / Dean Purcell)

The shop owner, who did not want to be named, said one the two people he saw on CCTV dragging the man from the car could be seen pacing the road between 6.30am and about 6.43am, immediately outside Parkfield Terrace and the main road on Khyber Pass Rd.

"He looked calm. He was looking up and down the road."

The owner said it was if the man was waiting for police, who arrived shortly afterwards.

"They had plenty of time to run away."

He said he did not see what happened to the second person. 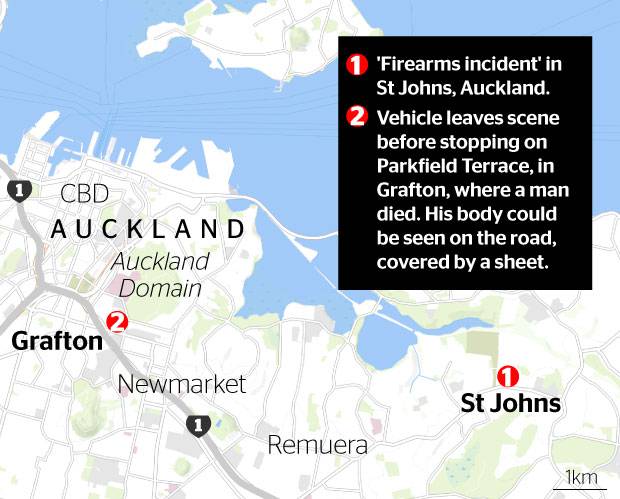 The owner, who has been in business there for five years, said he was shocked by the incident.

"It's usually really busy even at that time on a normal day. It's a peaceful street."

A witness earlier told the Herald a police vehicle had blocked off access to Parkfield Terrace, where several police officers were stationed.

Just ahead of the cordon, a car could be seen parked to the left side of the street, with the right side back door open.

A section of St Johns Rd - between Dorchester St and Ipswich Place - was also closed off. 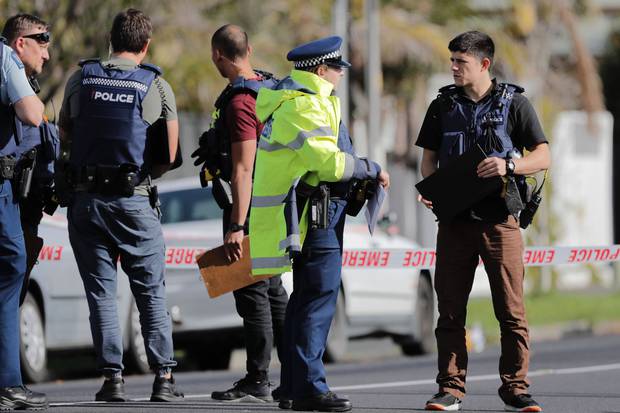 Police staff investigate at St Johns Road, a scene they say is linked to the body found in Grafton. (Photo / Dean Purcell)

Police this morning said they were speaking with witnesses and working to understand the circumstances of the incident.

"While this incident will be unsettling for the community initial indication suggest the parties involved in the incident were known to each other," police said.

Inquiries are ongoing and anyone who has information that may help the investigation was encouraged to call Police on 105.