A man accused of being an Islamic State sympathiser has been found guilty by a jury of possessing propaganda-style material for the terrorist organisation.

However, he has been acquitted on other charges for allegedly possessing a graphic video depicting a prisoner being decapitated and possession of an offensive weapon.

The 32-year-old, known only as S due to an interim suppression order, has been on trial in the High Court at Auckland for the past week.

S was also charged with failing to comply with a police search, which the jury found him guilty of.

The three publications were two audio videos with nasheeds (hymns and chants) and a seven-minute, violently graphic, Isis propaganda video.

S was found guilty of possessing the two nasheed publications and not guilty of of posessing the longer video.

The material has since been declared objectionable by the Chief Censor for promoting acts of extreme violence, cruelty and terrorism. It was only the second time the Office of Film and Literature Classification was asked to look at Isis-related material.

Isis, also known by its Arabic name Daesh, is a designated terrorist organisation which at its peak in 2015 held large areas of Iraq and Syria in its quest to establish an Islamic state under Sharia law. In his own words, S claimed while giving evidence he was interested only in the Islamic State established by the prophet Muhammad.

He was convicted by Justice Sally Fitzgerald of the charges he was foung guilty of and remanded him in custody until his sentencing in July.

S came to New Zealand in October 2011 and for the first few years of his new Kiwi life showed no signs of supporting extremist beliefs.

However, in autumn 2016 he came to the attention of New Zealand Police. It was because of what was being posted to his Facebook page.

Police knocked on his door in April and May 2016, giving him a formal warning and advising him possession of such material was an offence against the Films, Videos, and Publications Classification Act 1993.

S was apologetic, court papers obtained by the Herald record, and said he had shut down his Facebook account.

But in July, S was back on social media after reopening two Facebook accounts.

Police discovered the accounts in October and also found S was operating three separate pages. The accounts were monitored and in December several posts, including videos and photos, concerned police.

It depicted extreme violence and atrocities committed against Muslims, including a video of the Indian Army executing a Kashmiri civilian, body being driven over by a tank and images of dead and mutilated children.

Two months later, he was arrested at Auckland International Airport.

S was about to leave on a one-way flight to Malaysia and travel onto Singapore. He later said he was going for a holiday.

A search was also carried out at his apartment in May 2017.

A large hunting knife was found under his bed, which S later told his High Court jury was for his own protection.

His iPhone was also seized but S refused to provide the password. He told police the posts were shared because he wanted to show others what was happening to Muslims throughout the world.

Remanded in custody and denied bail, S would later plead guilty in June 2018 to representative charges of knowingly distributing restricted publications and other unrelated offences over credit card use. Police withdrew a charge relating to the knife.

In September 2018, Justice Edwin Wylie imposed a sentence of supervision.

However, in the time between pleading guilty and being sentenced, S continued his online infatuation with Isis.

While he had initially been scheduled for sentencing on August 7, 2018, the trial heard, he was considering changing his pleas to not guilty.

S entered the High Court at about 8.13am that day and left at about 8.40am. During that time in the historic courthouse, however, he searched for "ISIS allegiance" and news stories about Islamic State.

The next day he went to an East Tamaki shop and bought an identical hunting knife to the one police had earlier seized.

The hunting knife, in a camouflage sheath, was couriered to an Auckland mosque, where S was a resident at the time, at his request. His jury found S was never in possession of the knife in a public place.

"As you'll see it's not a small knife, not the sort of knife you'd have in your kitchen drawer," Crown prosecutor Henry Steele told the jury.

S said during evidence in his defence he had a right to arm himself with the knife.

"You're worried about one knife, I am telling you I will buy 10 knives. It's about my rights." 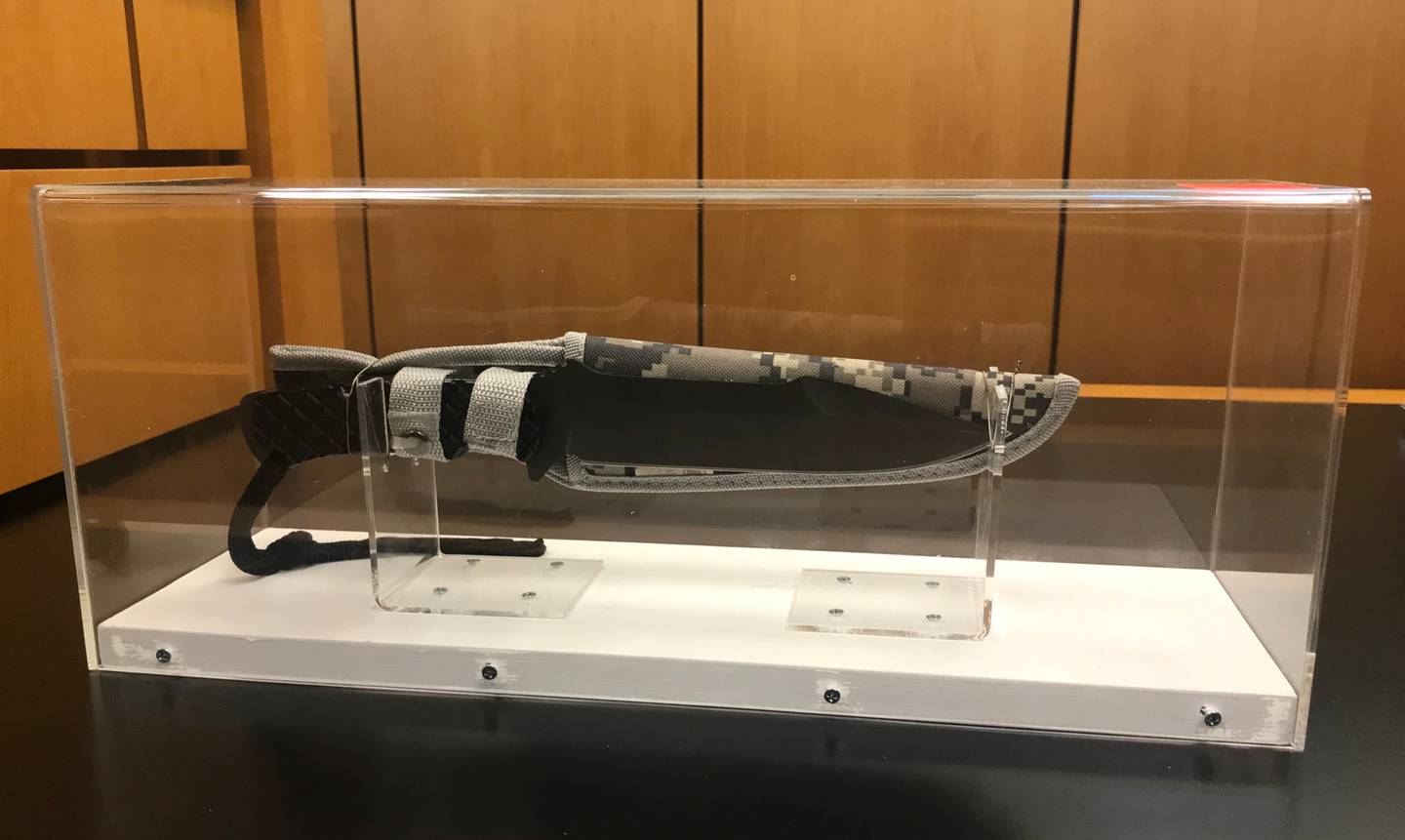 While awaiting the delivery of the knife, S frequently checked the track and trace number, before being arrested at about 4.40pm on August 9, 2018.

He again declined to provide police with his pin code, but his tablet and phone were eventually accessed and revealed a dark and violent internet history from after he was granted electronically-monitored bail.

Steele told the jury he couldn't take them inside the thoughts of S at the time "but I can get you pretty close".

The internet history, laid out in an extensive timeline for court, revealed a "window into his mind".

"We can infer what he's thinking, what he's intending," Steele said.

Internet searches, some of which had been electronically bookmarked, included "safety and security guidelines for lone-wolf mujahideen", looking for a hunting knife, camouflage pants, Islamic State dress and New Zealand prison clothes and food.

S also made efforts to research the case of Imran Patel, an Isis supporter and the first person in New Zealand jailed for distributing extremist videos. Patel was stopped at Auckland International Airport trying to leave for Syria with a companion.

An internet video also purported to provide instructions on "How to attack kuffar and how to make explosive devices". Kuffar, or kafir, is an Arabic term used to describe an infidel or non-believer.

The nasheeds, one of which was called "What a victory for he who got Shahada", and the video were also discovered. S posted some of the lyrics on his personal Facebook account.

The Shahada nasheed - a reference to martyrdom - featured a black-clad fighter with a machine gun, Isis flag and lyrics advocating for Jihad and decapitation.

"We will drink from the blood of disbelievers," the lyrics said.

S, who said he watched the nasheed videos several times, told the court: "You guys, making a big thing about the lyrics."

In explanation, he compared the nasheeds to the haka.

"You guys have Māori war cries,' he said.

The video, described as a "how to kill non-Muslims", showed a prisoner of Isis having their throat and wrists cut and another running with an explosive device strapped to him before it explodes. He was found not guilty of possessing the video, which was viewed only once.

S, who was combative throughout the trial and had frequent outbursts towards Justice Fitzgerald, said the Crown had wasted years of his life.

"I thank God, there have been prophets, other prophets who have been to prison," he said.

"It's just like a test … You guys put me in prison cause I'm a Muslim, that makes you an enemy."