A Wellington Mayoral candidate says if police won't act to end the protest at Parliament, then the Mayor needs to 'step up' and find a solution.

On Friday, Police Commissioner Andrew Coster announced the Police would not pursue any enforcement action against protestors despite the protest site growing by the day.

He also backtracked on an earlier pledge to start towing vehicles from occupied streets around Parliament, saying that would only escalate tensions.

"We needed to explore the option of that and test what the reaction would be. That approach would have been provocative and unhelpful."

Coster instead said a traffic management plan, coupled with de-escalation tactics, would be the police focus.

And the top police boss has had to issue warnings that a "significant" number of additional protesters is expected to show up at Parliament this weekend.

Wellington Mayoral candidate Tory Whanau said in the absence of a plan from Police, Mayor Andy Foster needs to now step up and advocate for Wellingtonians and put forward a solution.

"Police have portrayed our options as either full escalation or total appeasement. In reality there is a pragmatic middle ground that the Mayor and Police could be pursuing.

"The Mayor needs to show some leadership and advocate for Wellingtonians whose freedom to move safely about the city, access the university and workplaces is being denied."

Whanau said a 'middle ground option' is for Police to enforce a perimeter around the protest to stop it spreading any further into Thorndon and the City.

"I also want to see the Police targeting enforcement to regain access to the University and city's main bus station. This would leave the main protest camp in place but create a "harassment-free" corridor for Wellingtonians from the train and bus stations to the city.

"The protestors have a right to protest but students also have a right to go to class, our local businesses should be able to open their doors without fear of their customers being hassled and Wellingtonians have a right to move about their city without being abused and harassed."

Whanau said she had talked to a lot of Wellingtonians this week who were pretty shocked at the complete lack of leadership. 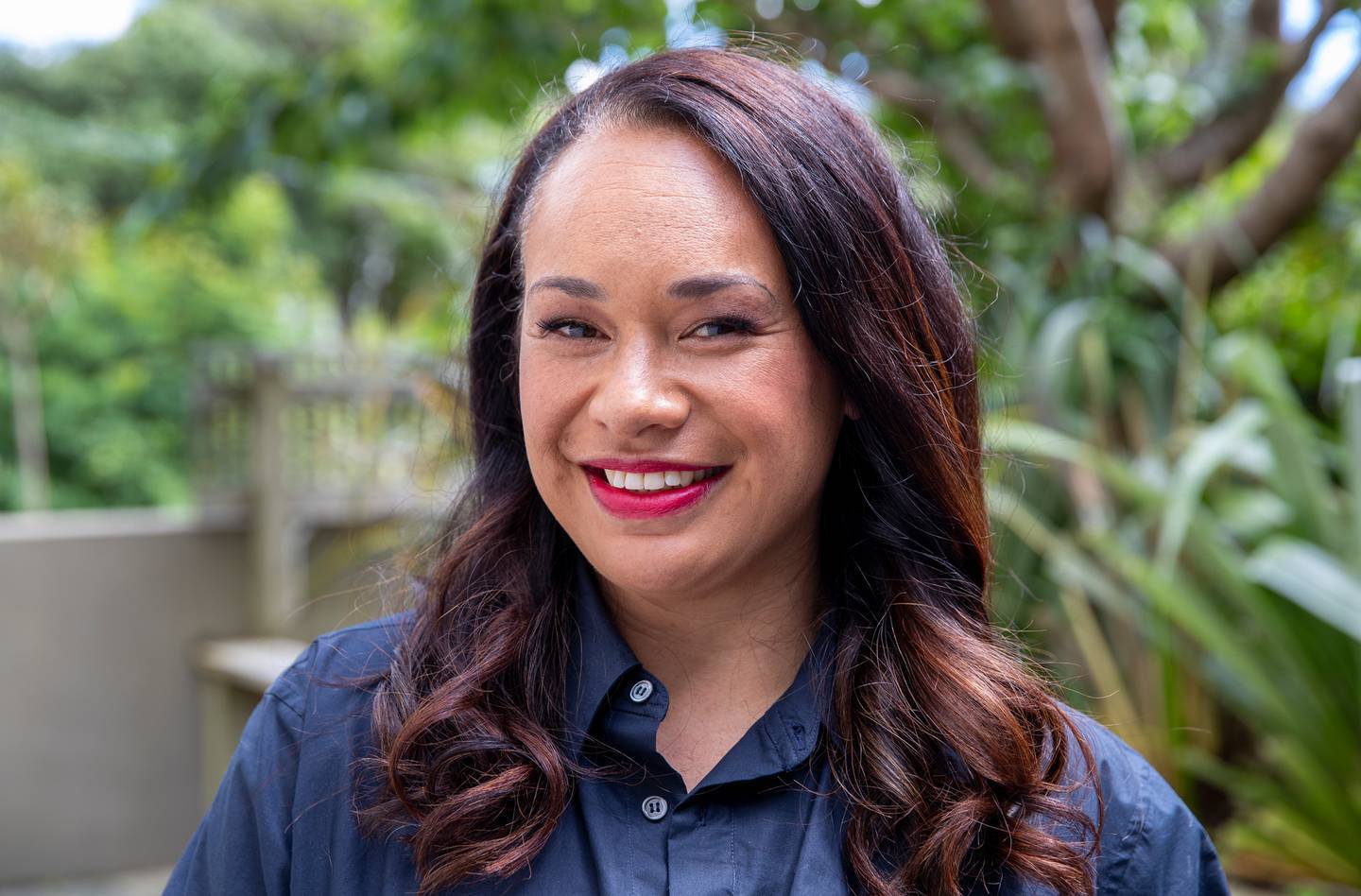 She said the Mayor has particular powers that can be used to resolve a situation like this. This includes the ability to declare a 'state of local Emergency' under the Civil Defence Emergency Act.

"I don't want to see this situation escalate into unnecessary violence. I, like many Wellingtonians, have friends and family members who are at or support the protest and we want to keep them safe.

"But we cannot send a message that if you park enough cars in the street and threaten violence you're suddenly immune from any social consequence."

Police Commissioner Andrew Coster has denied abandoning Wellingtonians after his tow truck bluster backfired in relation to ending the protest.

Coster had lost credibility after issuing a threat to tow protester vehicles which could not be backed up, National Party police spokesman Mark Mitchell said.

A group of 29 Wellington mayors, school principals, councillors and MPs have called for the illegal protest activities in and around Parliament to end.

At a press conference yesterday afternoon, Coster said the majority of demonstrators were peaceful and protest groups had established some internal discipline.

The Commissioner admitted his threat earlier in the week to tow protest convoy vehicles led to a surge in demonstrator numbers, and said more protesters would arrive this weekend.

"The number of people, structures and vehicles has continued to grow over the past 24 hours," Coster said.

"Police also anticipate a significant number of people joining the protest over the weekend."

Coster said some protest leaders had a "genuine acknowledgement" a lawful protest might be desirable.

And he said positive steps had been made after all parties in Parliament called on the protest to operate within the law if negotiations were to be considered.

MPs have largely objected to illegal parking in local roads and the erection of tents and other structures on Parliament's grounds.

On whether police had abandoned Wellingtonians, Coster said: "Not at all ... police need to manage this in a way that does not contribute to an already tense situation."

"In my view, he's lost all credibility," Mitchell said of the Commissioner. 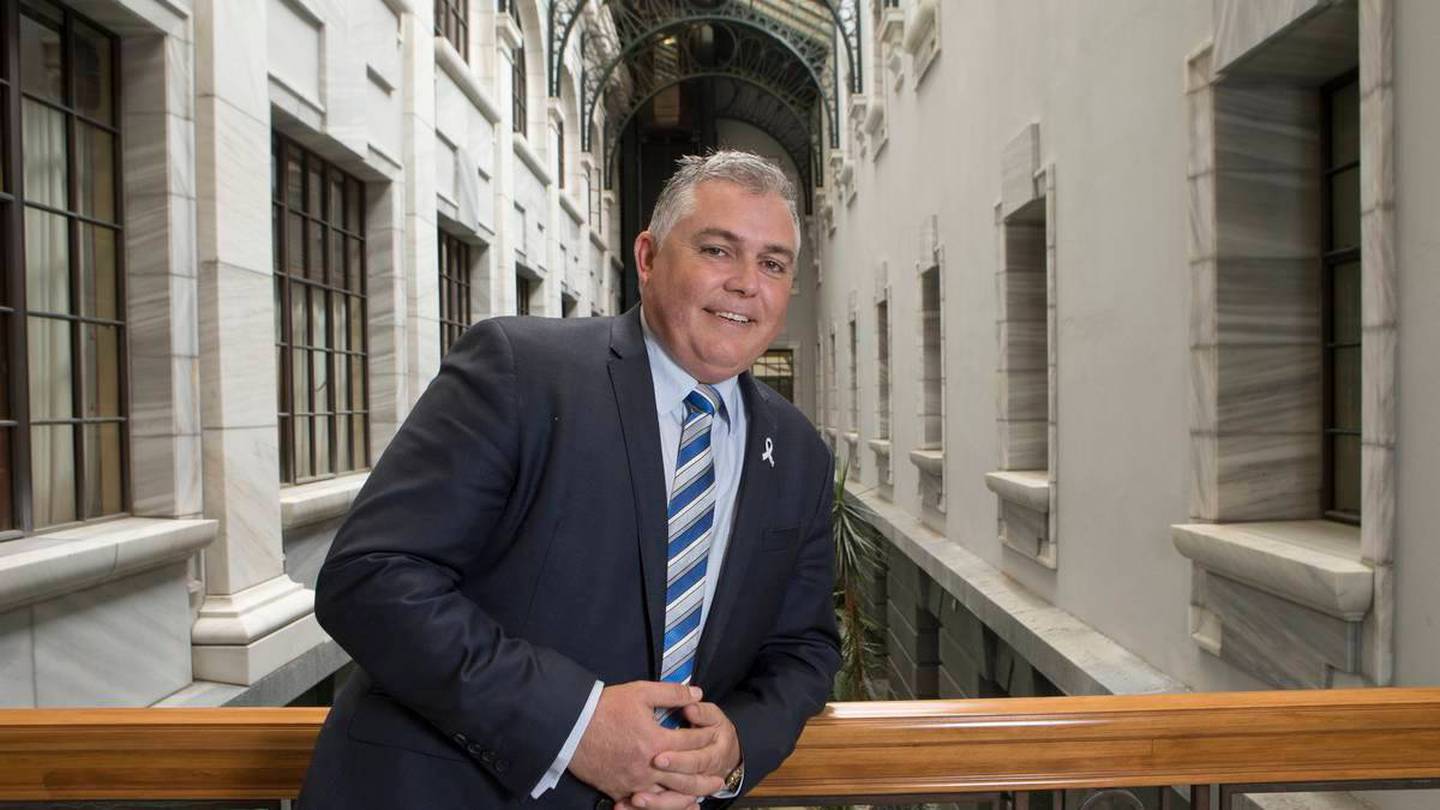 Though not explicitly calling for Coster's resignation, Mitchell said it was likely at least one assistant or deputy commissioner was qualified enough to take over.

Mitchell said he had sympathy for police officers, but Labour Party "policing by consent mumbo-jumbo" had created a culture of impunity.

Police Minister Poto Williams was approached for comment and replied briefly: "I continue to have confidence in the New Zealand Police." 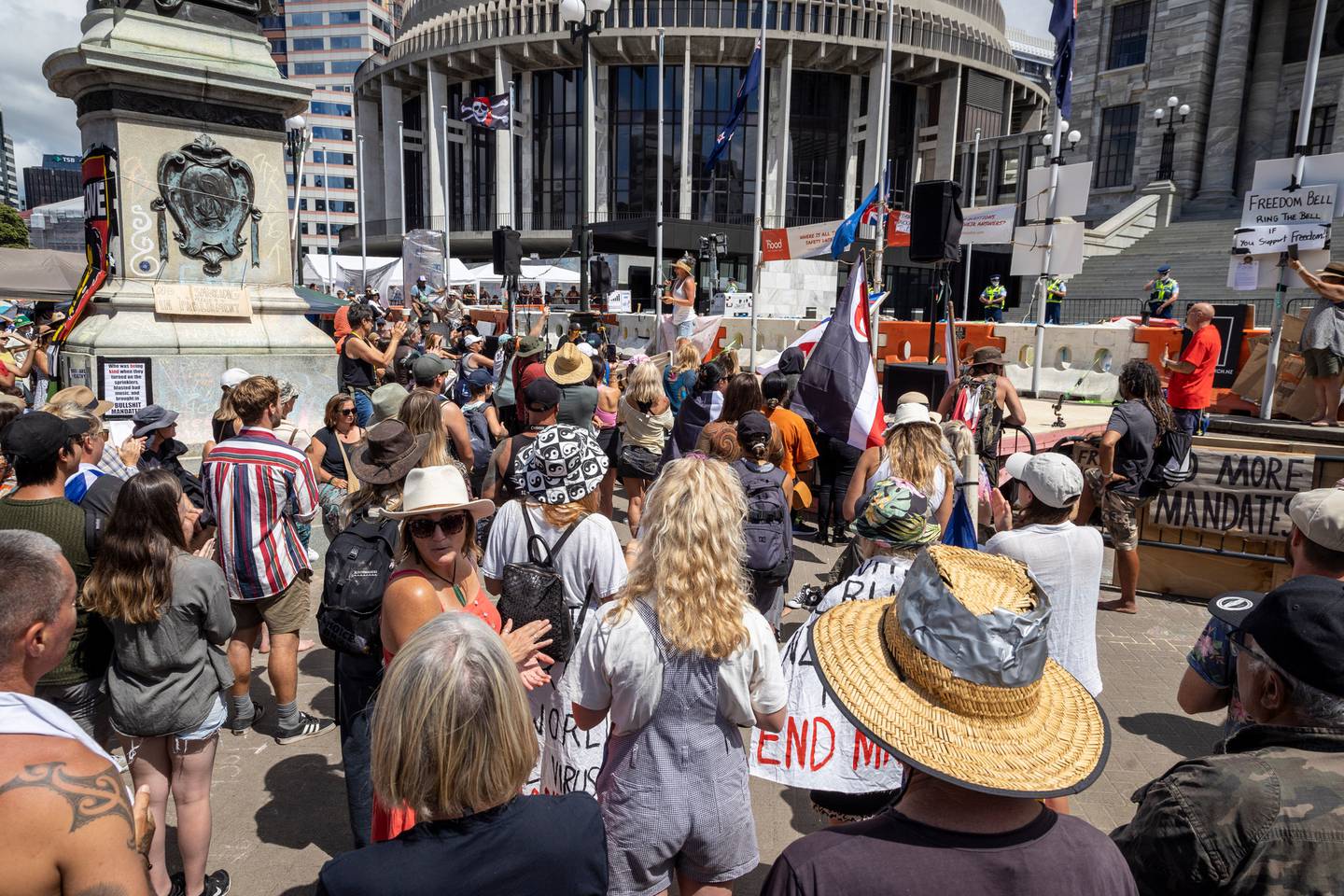 A variety of speakers have addressed crowds, but opposition to Covid-19 vaccine mandates is the most dominant discussion topic. Photo / Mike Scott

Thousands of people have gathered in Wellington since February 8, airing a range of views and grievances but with opposition to Covid-19 vaccine mandates a major theme.

Police officer Detective Senior Sergeant Ryan Yardley was at the protest and told Newstalk ZB he'd been given the choice of getting vaccinated or losing his job.

"The emotional toll it's taken on me and my family, that's a lot of what's driving me," he said.

"It's scarring. Everyone knows someone who's affected by these mandates."

Yardley told ZB a political or health-based solution to the protest was needed, not a policing solution.

"It's a peaceful protest and everyone seems happy. I think all they want to do is be heard."

He said opposing vaccine mandates through the legal system was also worthwhile. Protester Mark Pavlovich travelled from Lake Hāwea yesterday and the Herald asked what he thought of Coster's non-intervention approach.

"I don't think they have a choice. I think what they experienced the other day surprised them," he said, referring to the mass arrests on Thursday February 10.

"I think police expected a violent reaction, which could have given them an excuse to go further, but it didn't happen."

Pavlovich said he didn't think people would respond with violence to any intervention, but they would not move on voluntarily. 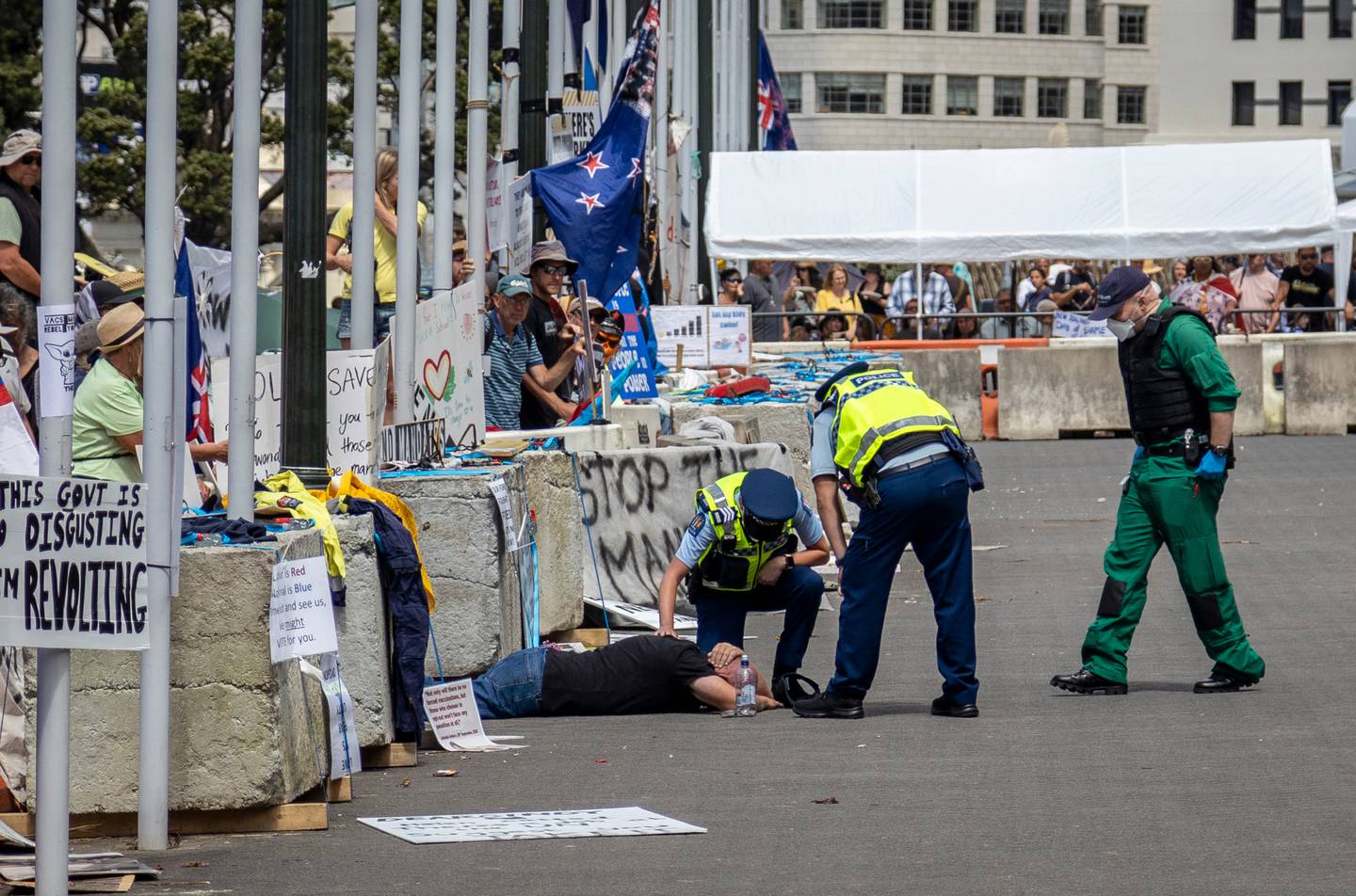 Police attend to a man who collapsed on Friday afternoon at the front of the convoy protest at Parliament. Photo / Mike Scott

Civic leaders from South Wairarapa to Wellington, including mayors and the Vice-Chancellor of Victoria University, said blocked roads posed a risk to emergency services and severely disrupted businesses.

Local residents, workers and students had been harassed and abused when trying to get around the area, the group of 29 said.

"There has been intimidation to Wellingtonians and city workers, and some residents have reported being too frightened or distressed to leave their homes."

The group added: "There is a right to peaceful protest in New Zealand that it is important to uphold. However, this protest has gone well beyond that point."

"Functioning courts are critical to the maintenance of law and order and the safeguarding of human rights. The courts must be able to continue to do their work." 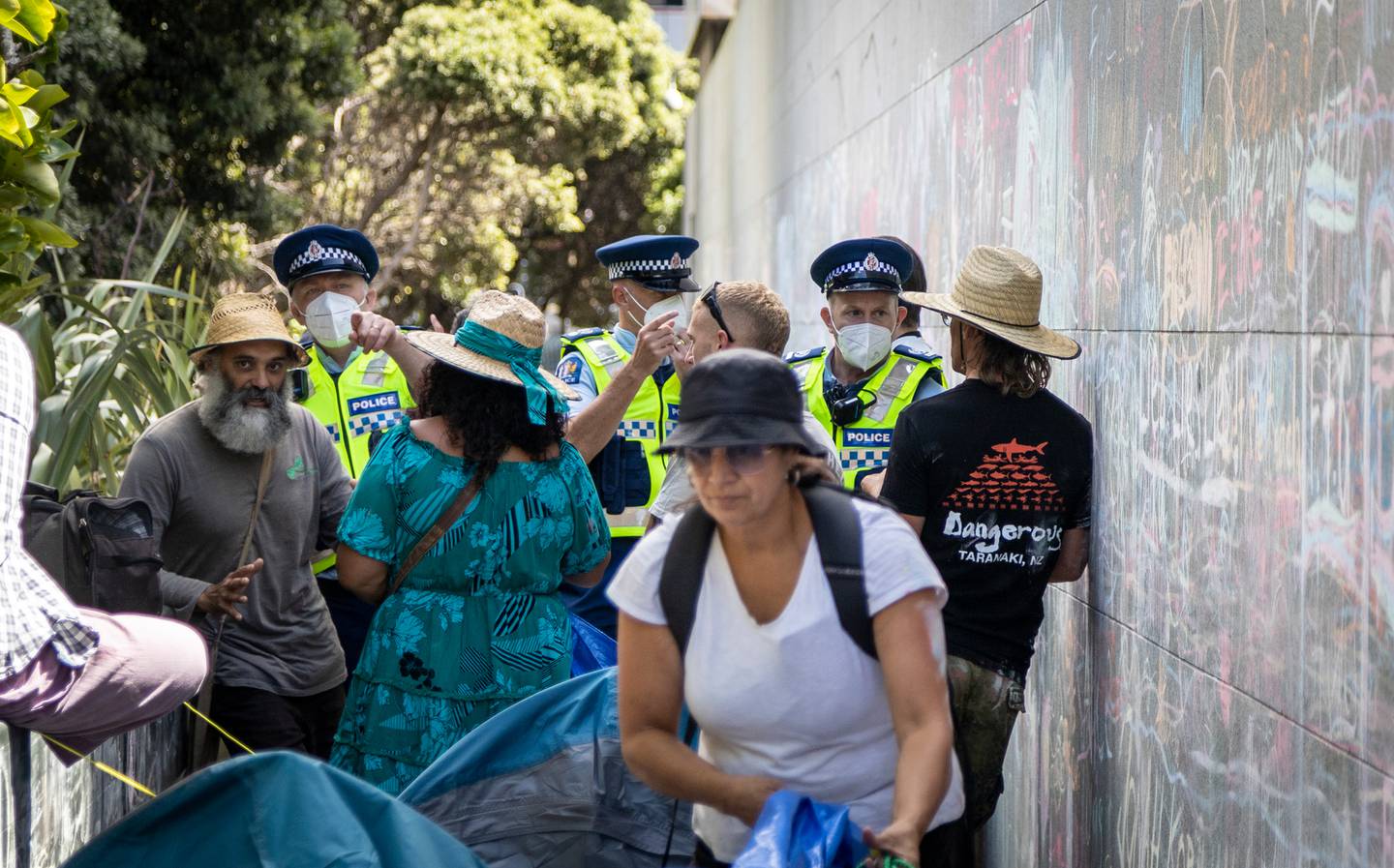 The convoy protest at Parliament has continued to attract new arrivals and enters its 12th day this weekend. Photo / Mike Scott

Meanwhile, six protest groups issued a statement apologising for treatment some journalists received when trying to cover the Wellington protest.

"We have re-briefed the internal security team and will continue to implement our internal communications strategy - whereby speakers will talk to the crowd throughout the day about the need for continued tolerance and respect to everyone including the media."

A Curia poll conducted for Family First found 39 per cent of people agreed employers should be able to sack unvaccinated staff, but 38 per cent opposed such moves.

Max Whitehead, employment advocate, said he was receiving many queries about the rights of unvaccinated workers and about people navigating workplace mandates.

He said employees attending anti-mandate protests could face disciplinary action but the odds of winning a case varied by industry and the nuances of protest action.

"The protest is a legally entitled thing to do," Whitehead told the Herald.

"If, however, the employee was breaching the law and brought the organisation into disrepute ... the employer could take a disciplinary action against the employee."

The Council of Trade Unions condemned the protest and said it did not support anti-mandate calls.

Richard Wagstaff, NZCTU president, said the protest was riddled with "conspiracy theories and unscientific assertions being circulated in an effort to undermine our public health response".

Yesterday, a record-high 1929 cases of Covid-19 were recorded in the community. The majority of cases were in Auckland.