One Kiwi returning home from India after his dad died has thanked his lucky stars for winning a space in the "managed isolation lottery" system, only to discover his room is so small it's like a "closet" or "prison cell".

He also worries the highly infectious Delta variant could spread easily among guests and staff at the Sudima Rotorua hotel, given returnees are being asked to leave their rooms and queue inside corridors while waiting for their Covid tests.

However, Managed Isolation and Quarantine government officials say rooms are selected to ensure returning Kiwis are safe and that Covid is not transmitted to the community. They also say Covid tests are performed in strict level 4 conditions.

The man, who didn't wish to be named, said he is on day five of his 14-day stay in a Sudima room that has a bed, bathroom and kitchenette but barely any room to move.

He estimates it to be 17sq m. By comparison prison cells in Auckland's maximum-security Paremoremo prison are about 9sq m.

The man said his room has no table, and he was only given a chair on day 2 of his stay.

Before that, he had to sit on his bed or the floor to eat or work.

He said he isn't looking for "sympathy or judgment" but simply wanted to point out how disorganised and poorly managed the MIQ system has been.

"It looks and feels more like a prison cell and (the Government is) probably being charged top dollars for a cramped room with no exhaust fans which would normally fail Healthy Home compliance," he said on Facebook, referencing the minimum living standards that private rentals must adhere to.

His post comes as thousands of Kiwis have been missing out on securing a place in managed isolation while the Government struggles to supply enough rooms to meet demand.

Many Kiwis overseas have been unable to make it home since the pandemic began two years ago, with some working rostered shifts abroad that keep them away and others being unable to make important family events.

Parneet Kaur was among those to have her heart broken when she was one of 31,319 people vying for 3800 rooms in the second virtual lobby release of MIQ rooms at the end of September.

The Auckland woman had been unable to plan a trip to India and back after her 29-year-old brother died unexpectedly on June 22.

The recent returnee in the Sudima Rotorua room, meanwhile, said he gained an exemption due to his father's death and his mother battling a brain tumour. 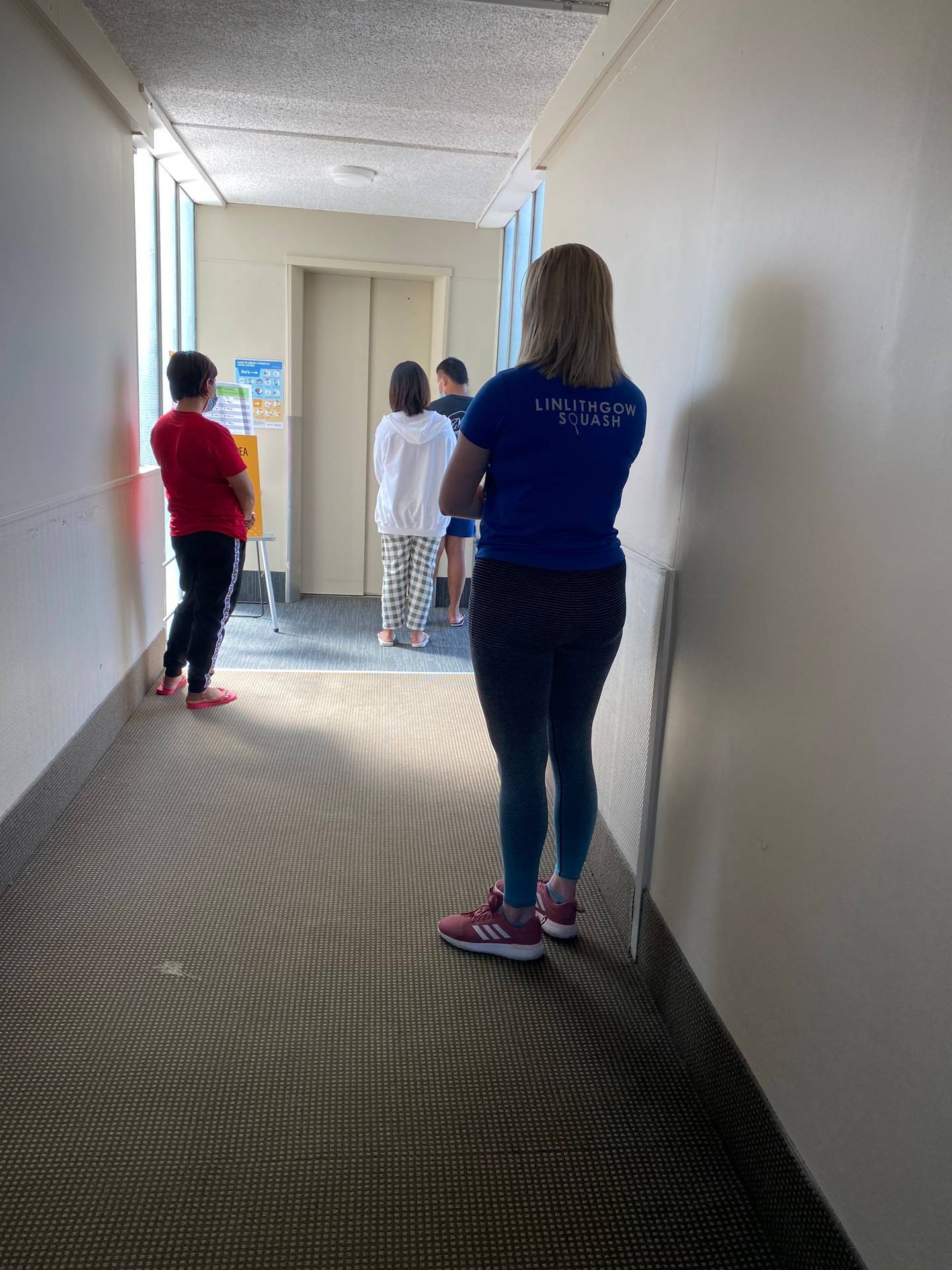 A man staying in managed isolation at the Rotorua Sudima fears Covid could spread among guests and staff due to them queuing indoors to get tested for the virus. Photo / Supplied

"I feel your pain and carry the guilt that I had to take a spot that may have been used by someone more destitute and deserving than me," he said on Facebook.

But while acknowledging he is lucky, he said it was wrong to be grateful to the Government for putting up so few rooms and pitting tens of thousands of Kiwis against each other.

"One thing people are suggesting is to feel grateful for winning a voucher when it's Government's responsibility to provide a fair and reasonable service for Kiwis to return home without turning it into Hunger Games and competition," he said.

It comes as some psychologists say there is emerging evidence of long term and in some cases "severe" effects from time spent in MIQ.

"It can increase stress and depression, it can worsen insomnia or bring on insomnia. It can ... bring on symptoms akin to post-traumatic stress," she said.

Joint Head of Managed Isolation and Quarantine Brigadier Rose King Managed isolation hotels are selected on the basis they can "ensure people staying and working in them are kept safe" and don't take Covid into the community.

"While facilities do their best to provide good service and ensure the comfort of returnees, their primary responsibility is to ensure that they are acting in accordance with our operational framework and infection prevention," she said.

She also said returnees could go outside to exercise and are given access to the internet and daily wellbeing and health checks.

The Sudima Rotorua returnee also feared Covid could be spread in the hotel because guests were being called out in groups to go downstairs for virus tests, leading to queues in the corridors and elevator. 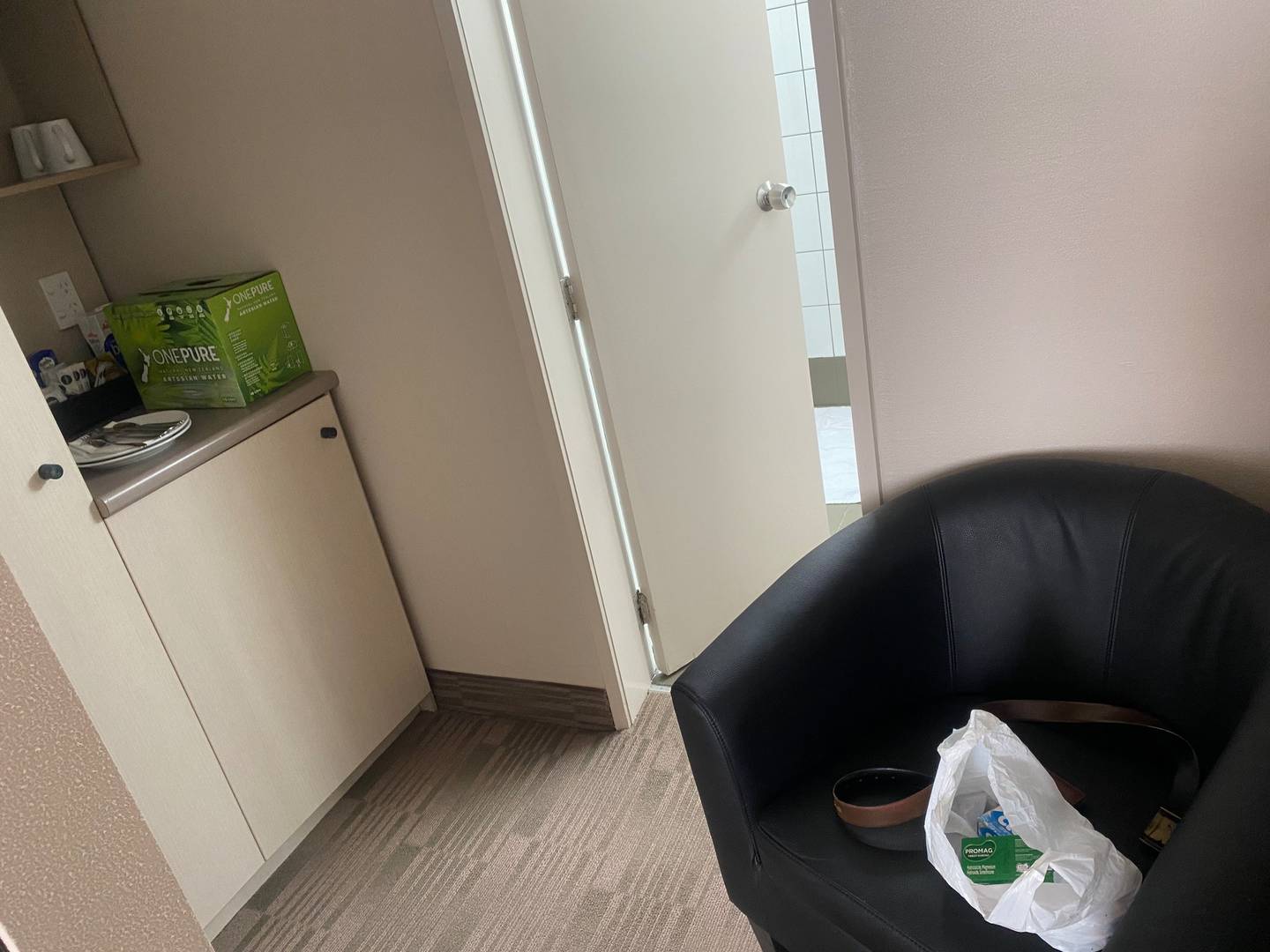 The returnee says his tiny room has no table to eat and work on and barely any room to move about. Photo / Supplied

At a previous MIQ hotel, he said testers would come to each room one at a time and do the test in the doorway, with no one leaving or entering the rooms.

MIQ's King said all returnees at the hotel are called in batches and "must wear personal protective equipment and keep physically distanced from other bubbles at all times while outside their rooms".

"At Sudima Rotorua Covid-19 testing is done in a dedicated swabbing room with appropriate ventilation," she said.